According to Bloomberg data, as of August 2019, the number of blockchain projects promoted by countries around the world has reached 154, which are mainly used in the fields of finance, government archives, digital asset management, and voting.

Governments of different countries use blockchain for different purposes, such as saving administrative expenses, anti-corruption, or carrying out unified digital reforms on old administrative systems to improve efficiency.

Zinc Link has consulted the official information release channels at home and abroad, and sorted out the application forms of government blockchains around the world. 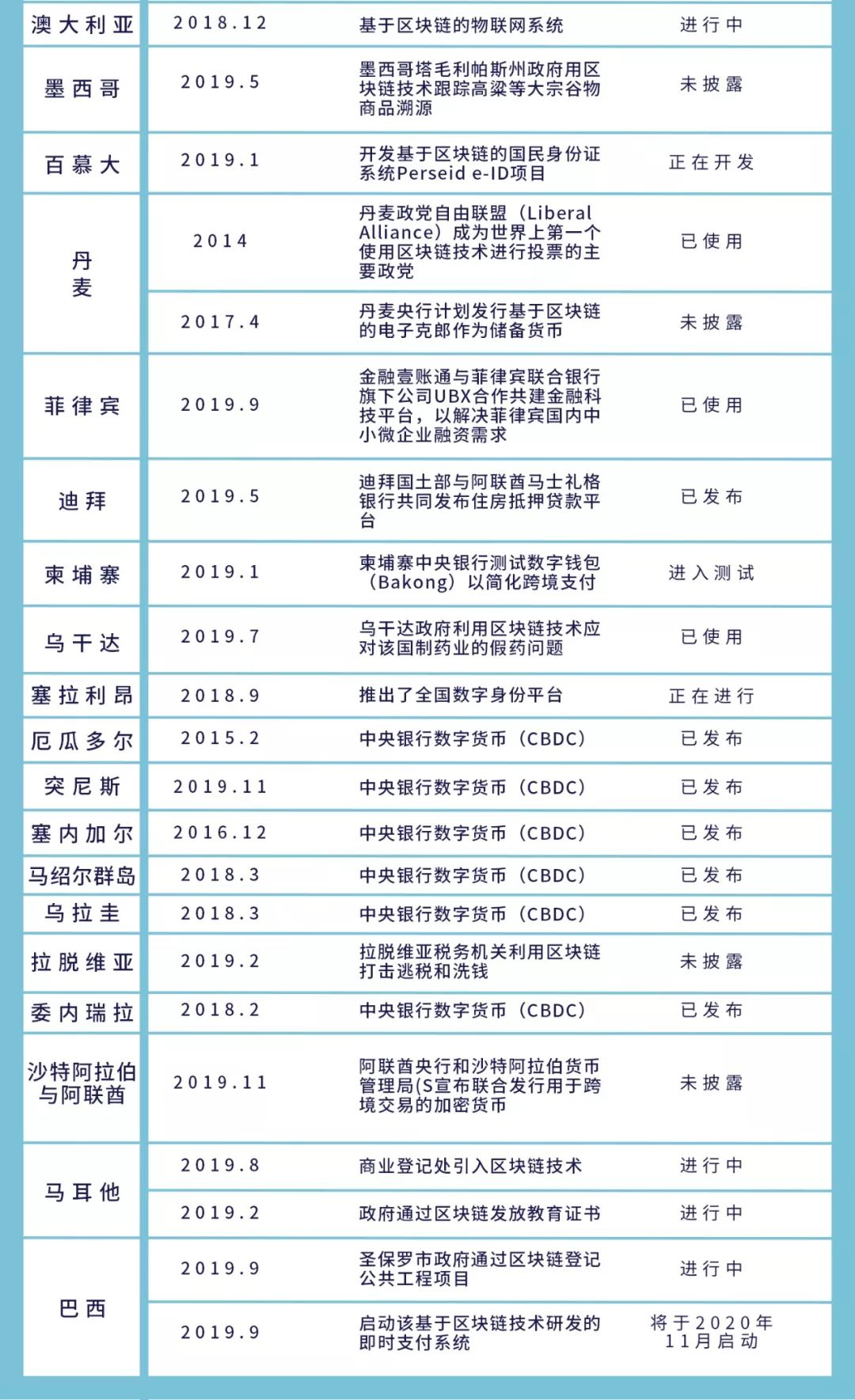 The financial sector is the hottest area in which the blockchain has landed, and the central bank's digital currency is the focus of many governments' active deployment. Because banks in various countries realize that blockchain and digital currencies will soon play a role in the global currency system.

The People's Bank of China announced in July 2019 that it plans to launch a central bank digital currency, which has now undergone closed-loop testing.

On January 23, 2020, six central banks in Canada, the United Kingdom, Japan, the European Union, Sweden and Switzerland announced that they would collaborate on digital currency research.

The Federal Reserve's attitude towards digital currencies has changed from previous prudence to experimentation and exploration. On February 5th, Lael Brainard, the Fed's governor, said that the Fed is studying a series of issues related to digital payments and digital currencies, including policies, design and legal development around the issue of digital currencies.

Earlier in October 2019, IBM and the International Monetary and Financial Institutions Forum released a report that currently 73% of central banks worldwide have expressed support for central bank digital currencies, and 38% of central banks have stated that they are actively exploring and testing this technology.

At present, there are six countries that have officially launched fiat digital currencies around the world. They are all third world countries, including Ecuador, Tunisia, Senegal, the Marshall Islands, Venezuela, and Uruguay.

The most intensive government applications

At present, government affairs are the most widely used scenarios for governments in various regions. China and South Korea lead in the number of landing projects in the government blockchain.

The Chinese government's application of blockchain in the field of government affairs focuses on the digital transformation of government services, judicial, taxation, commercial services, electronic bills, and digital identity.

The application space of government blockchain is still very broad, and it is still the window period for government affairs layout. As the Chinese government will continue to increase investment, it is expected that large-scale landings will occur in the next few years.

Most blockchain applications in South Korea are also in the field of government affairs. Several government departments, including the National Police, the Rural Development Administration, and the Ministry of Health and Welfare, have used blockchain technology to implement business data upload and process management.

Germany and Japan use blockchain to solve corresponding problems according to their own characteristics.

In addition to finance, the German government focuses on exploring blockchain applications in areas such as digital identity, energy and industrial Internet. This stems from the deep industrial background of the German state.

The US government's blockchain technology focuses on four areas: citizen services, regulatory compliance, identity management, and contract management. For example, in January 2017, the US Food and Drug Administration (FDA) explored the use of blockchain to securely share patient data.

In addition, the United States and Australia have repeatedly deployed blockchain technology in the military field.

Similar to the United States, the Australian government uses Lockheed Martin, the same weapon equipment supplier as the United States, to integrate the characteristics of blockchain technology into its data systems to address potential threats to networks and weapon operating systems.

The Huangpu District of Shanghai has launched the "18 Bund Finances" to cultivate and gather a group of leading fintech companies and unicorns in areas such as blockchain applications.