As we all know, finding reliable data on cryptocurrency exchanges is a difficult task. Last year, Bitwise released a widely circulated report, raising doubts about the trading volume data provided by the exchange itself. In response to this doubt, many exchange ranking websites and analysis companies have launched indicators that evaluate cryptocurrency exchanges and trading volumes.

However, these indicators have their own shortcomings. They may not include major exchanges, and some are based on indicators that are easy to falsify, such as network traffic or app store rankings, and often lack transparency in their calculations.

Although this solution is not perfect-it is still based on some assumptions, and may not be able to identify all cold wallet addresses with 100% accuracy-but it does have a great advantage over other exchange evaluation indicators. Since this data comes from the analysis of asset transfers on the chain, it is difficult to falsify.

So, according to our analysis, which exchanges have the most bitcoins in their cold wallets?

First: Coinbase holds the largest number of Bitcoins among all cryptocurrency exchanges to date, and its holdings have grown significantly over the past year. In addition, this growth is relatively stable and is obviously not affected by the rise and fall of the currency price. Bitcoin in the Coinbase cold wallet will soon break through the one million mark. 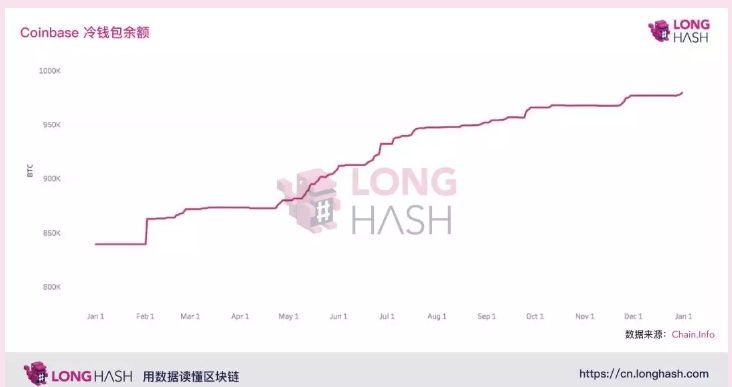 Coinbase's clear advantage and stable holdings growth may be because it attracts a large portion of long-term / institutional investors who are less concerned about short-term price fluctuations.

Situation of other major exchanges 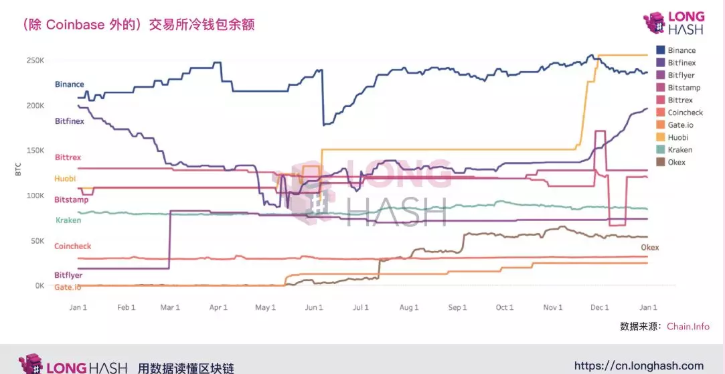 In the picture above, we can see some obvious differences. The amount of Bitcoin in Binance Cold Wallet has remained stable in second place for most of the year, and its currency holdings have not shown a clear trend when it fluctuates. Bitfinex ranked third in the beginning of 2019, but its bitcoin stock was declining in the first quarter and did not recover until the end of 2019.

Bittrex, Bitstamp and Kraken ranked fourth, sixth and seventh respectively at the beginning of 2019, and the bitcoin stocks in their cold wallets are all flat.

Huobi's situation is probably the most noteworthy. In 2019, the bitcoin holdings of Huobi Cold Wallet jumped from fifth to second. It is said that most of the transactions of PlusToken are processed through Huobi. If true, this may explain the reason for the sharp jump in Huobi's ranking.

In our analysis, the last four exchanges are Coincheck, Bitflyer, Gate.io and OKex, three of which have increased their holdings. Coincheck's holdings are flat.

In short, in terms of bitcoin holdings in cold wallets, Coinbase is still the number one cryptocurrency exchange, and its lead has maintained a steady growth over the past year. In 2019, exchanges including Binance, Bitfinex, Bittrex, Bitstamp, Kraken and Coincheck have relatively little change in their holdings. Huobi, Bitflyer, OKEx and Gate.io have all seen significant growth.

However, our interpretation of the cold wallet data on the chain also needs some attention. The vertical inflection point in the above figure may be due in principle to the algorithm's discovery of a new cold wallet address or a delay in data synchronization, which may not necessarily reflect the new balance actually deposited in the exchange.

Among the exchanges we studied, several issued their own exchange tokens, which made us wonder: Is the return of these tokens in 2019 related to the holdings of their exchanges' cold wallets?

There are two reasons why this assumption is possible. First, more user deposits mean that more users will trade on the same exchange, which will bring more revenue to the exchange. Secondly, the high amount of coins held in cold wallets indicates a high level of user assurance in the face of hacking, fraud or other events that may cause losses, which means that users will prefer to hold the exchange's tokens.

Binance, Huobi, Bitfinex, Gate.io and OKEx have all issued their own tokens. In order to exclude the price fluctuations of bitcoin itself, we have chosen bitcoin and illegal currency as the unit of measurement to measure the earnings of these exchange tokens.

We found that all exchange tokens performed particularly well in the first quarter of 2019, with revenues exceeding 100%, but this considerable gain disappeared later in 2019. By the end of the year, the best performing exchange tokens were from OKEx (2x) and Huobi (1.3x). Binance Coin (BNB) generated substantial gains in the middle of the year, but unfortunately failed to maintain it until the end of the year. Gate.io and Bitfinex's tokens have both fallen in 2019.

Although the amount of cold wallet storage is not a perfect indicator for evaluating crypto exchanges, it does provide us with a data entry point that is worthy of observation for the number of exchange users, transaction volume and income. In contrast, the data stored in cold wallets is also difficult to forge or manipulate.

This article is derived from " LongHash Blockchain Information ".

Zuckerberg: Libra will enhance US financial leadership and has no intention of competing with sovereign currencies