Editor's Note: The original title was "Lei Zheng: How Blockchain Solves the Credit Problem in Charity." This article has been deleted without changing the author's original intention.

On the evening of February 10th, Zheng Lei, Ph.D., Director of the Digital Economic Research Center of the Hong Kong International New Economic Research Institute, was a guest at TALK. The following is a record of the interview.

· Blockchain technology can open up the front-end, middle-end and back-end data to make the donation data and distribution data public. Regardless of donation or allocation, allocation and use, there is a time stamp record, and each fund can be quickly matched and verified.

· The blockchain uses a distributed technology and consensus algorithm to reconstruct a trust mechanism. The data stored on the chain is reliable and cannot be tampered with. It is naturally suitable for social welfare scenarios.

· Each process of charity must be completely transparent, and there must be no dead ends, otherwise it will be difficult to get everyone's trust.

Moderator Zhao Yidan, editor-in-chief of Huoxun Finance: Good evening, everyone! Thank you for watching the special section of the blockchain industry talent think tank of Huoxun TALK! The theme of this special column is "How does blockchain help business and organizational innovation under the epidemic?" 》

In charity activities, blockchain technology can be used to achieve transparent management of the entire process of charity

Zheng Lei: I just looked at the topic discussed by the previous guest. I think the topic of charity has once again attracted widespread attention in this epidemic. I have been thinking about the topic of philanthropy, so Yidan invited me to talk, and I chose how to combine this with charity and blockchain technology to communicate with you.

With the continuous development and progress of society and the continuous improvement of the quality of the people, the demand for charitable activities is growing. There is widespread philanthropic awareness. At present, the biggest problems in China's philanthropy are opaque processes and the lack of necessary credit mechanisms.

Of course, there are other issues that hinder the development of charity, such as the establishment and supervision of charitable organizations, and the existence of a monopoly in the field of charity.

The charity scandals that have been exposed by the media in recent years are mainly people who use the banner of charity to make charities, seek improper benefits, or embezzle the money of caring people, which has dampened the public's enthusiasm for donations and hurt people's love It also reduces public trust in charity.

Charity is an important way to encourage good deeds, advocate virtues, help the poor, alleviate social contradictions, and build a harmonious society. It is a non-profit enterprise that is not for profit. However, due to the imperfect laws and regulations of philanthropy, the incomplete system, and the strict supervision, the development of philanthropic organizations in China has been restricted, which has affected the development of social functions.

The key point for the development of the philanthropy industry is that charitable organizations must have credibility in order to obtain sustained support, and information transparency is a prerequisite for credibility.

Some people use the charity platform as a channel for tax evasion, tax transfer, and even drilling regulatory loopholes, embezzling funds, etc., which undermines people's trust in the charity platform and inhibits the development of charity, making this important social assistance function. Loss of function, the result is very harmful.

Today we focus on the key link of solving the credit problem of charity platforms, that is, the transparency of the use of charity funds. From a technical point of view, there are several key nodes that need to be monitored: donors, charity platforms, and payees (donor objects). These three have different control requirements. Let ’s take a look.

At present, it is difficult for the operation and management of the charity platform to achieve the implementation of the various control requirements of the above nodes, which is an objective problem. Even if each node has a detailed and accurate record, it is still impossible to check the ins and outs of every donation.

The three key nodes of the charity chain cannot be mutually verified, which has led to many loopholes that can be operated in black boxes, the most serious of which is the charity platform.

To solve the above problems, blockchain technology can play a key role. Donors, philanthropy platforms and payees should be data-chained, and the entire process should be completely open. Whether it is the donor, the public, or the demand side, you can clearly see the flow of each charity, so that each charity The models can be implemented.

Blockchain technology can connect the front-end, middle-end, and back-end data to make the donation data and distribution data public. Regardless of donation or allocation, allocation, and use, there is a time stamp record, and each fund can be quickly matched and verified.

Social philanthropy, its participants can obtain psychological satisfaction, social reputation and recognition through charitable activities, these powers can play a sufficient driving force. At this time, the token is still needed, for example, as a measure of charitable behavior's contribution to society, its role is much like a medal, a certificate of merit, and a proof of contribution, without having to count and enter the transaction link.

We mainly talked about how to use the blockchain technology to realize the transparent management of the whole process of charity in charity activities. If not only donations but also materials are donated, the process will be more complicated, but they are still connected at the data link level.

For charitable materials donation, as the physical goods are involved in the circulation and storage, the data of these links need to be chained. This requires the support of IoT technology, which will increase the amount of data, and also need to leverage cloud computing, big data and Artificial intelligence technology.

The main point I want to talk about is so much. Let's see if you have any questions.

Zheng Lei: I have published a book before . I haven't talked so much about this issue, but I have given some application examples. If you have time, you can take a look. Let me give you a few examples.

The first case is an industry application summarized in the appendix of "Blockchain + Era: From Blockchain 1.0 to 3.9". Mutual insurance.

Mutual assistance insurance is also a charitable activity. Under the traditional operating mode, there are risks such as cheating on the platform side, difficult supervision, opaque public funds and accounts, and other risks, resulting in a lack of public confidence and trust.

Blockchain technology turns each transaction party into a node in the network, and the assets and products of various institutions are reflected in the network in a digital form, and the problem of mutual trust between institutions is formed to form a unified alliance to realize the traceability of capital flows. , The information is open and transparent, and the entire network of information sharing; at the same time, based on the distributed account books, tamper-resistant, transparent and traceable processes, to avoid the risk of internal cheating.

For example, in August 2017, the UK's Start Network brought together 42 well-known charities such as Oxfam, Care International, and Save the Children, and social enterprise startup Disberse Cooperation, use the blockchain to track the flow of funds, reduce the loss of funds and the risk of capital abuse in a transparent and rapid manner, so that its funding can make the most of its role, and thus be responsible to taxpayers and recipients.

We introduce the solution based on the blockchain, which is divided into three points: the blockchain uses a distributed technology and a consensus algorithm to reconstruct a trust mechanism. The data stored on the chain is reliable and cannot be tampered with. It is naturally suitable for social welfare. Scenes. Relevant information in the non-profit process, such as donated projects, fundraising details, fund flows, and recipient feedback, can be stored on the blockchain. Subject to meeting the privacy protection of project participants and other relevant laws and regulations, there are Conditional public announcements.

Non-profit organizations, payment agencies, audit institutions, etc. can join as nodes in the blockchain system to operate in the form of alliances, facilitate public and social supervision, make the blockchain truly a "trust machine", and help the rapid development of social welfare healthy growth.

Smart contract technology in the blockchain can also play a role in social welfare scenarios. For some more complicated public welfare scenarios, such as targeted donations, batch donations, conditional donations, etc., it is very suitable to use smart contracts for management. Make public welfare behaviors fully comply with the pre-set conditions, be more objective, transparent, and credible, and eliminate spooky behaviors in the process.

This is the first example. The second example is a blockchain application case for domestic donations.

In July 2016, Alipay partnered with the Charity Foundation to set up the first blockchain-based charity project on its charitable donation platform to raise funds for hearing impaired children and help them "regain a new voice."

In this project, the donor can see a feedback message of “passing records of love”, and on the basis of necessary privacy protection, showed that his donation was transferred from the payment platform to the foundation account, and finally entered The process of assigning an account to a grantee.

The third example is a blockchain application case for charitable donations. Blockchain combined with other technologies can also solve various problems of charity platforms handling donated materials. For example, waiting for enterprises to start research and development of "source donation material traceability platform".

Many institutions at home and abroad are linked on this platform. Whenever someone or an institution wishes to donate a batch of materials to an institution, as long as you simply register on the platform, you can see the donation details, logistics tracking, material receipt, and material implementation. Wait for all the processes, and you can also see the demand dynamics in real time. The whole process can be traced to the source and difficult to tamper with.

These are three application cases that I want to share with you. This is a framework introduction, there will be many details in the actual application process, and professional manufacturers need to solve it.

That's all I want to say, thank you all.

Zheng Lei: Everyone is quite dissatisfied with the problems that arise in philanthropy. Only by solving those problems can we truly make philanthropy an integral part of our lives. Charity is the highest state of modern people's spiritual life, and it is also an important guarantee mechanism in modern society.

Zhao Yidan: Today Xiong'an Group released a charity donation management traceability platform, which aims at the three major problems in the current fight against the epidemic: "difficult to demand, difficult to make donations, and hard to believe." I believe that there will be more "blockchain + charity" solutions landing.

Zheng Lei: Each process of charity must be completely transparent, and there must be no dead ends, otherwise it will be difficult to get everyone's trust. In fact, we all know where the problem is, but there was no technical means to solve it before. Now the technical means has gradually matured. Of course, there are still some socio-political issues that need to be resolved in order to open the door to the application of blockchain technology in philanthropy. 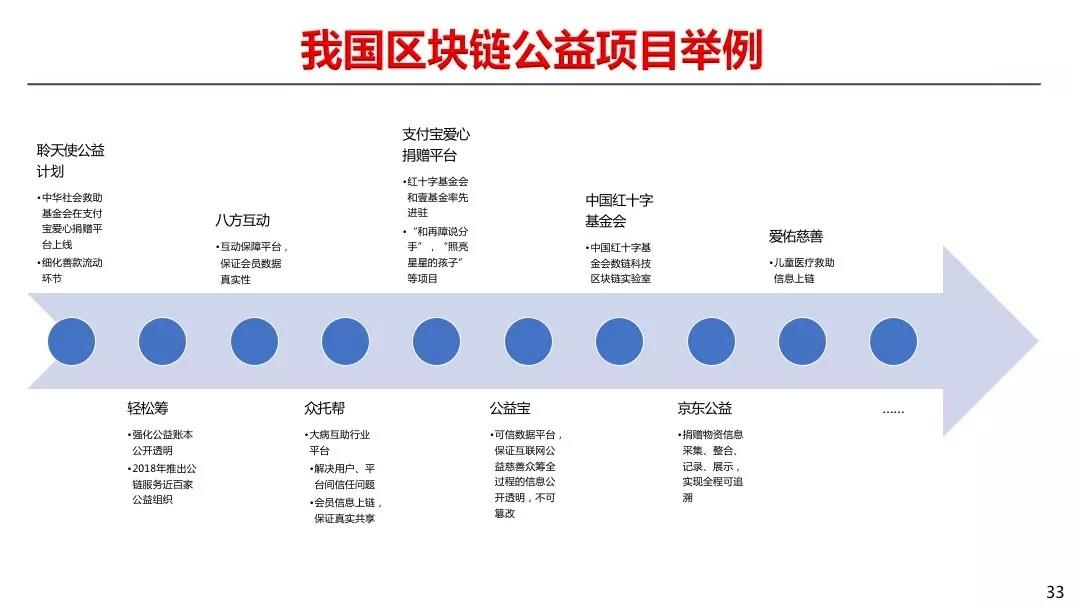 Xinbaoyuan He Baohong: Under the…

Frequent trust crisis in the…