Before the outbreak of the new crown pneumonia epidemic, was the blockchain useful?

The answer is yes. In this outbreak of the epidemic, the blockchain has also played an important role. From tracking cases, collecting information, and deploying materials, a large number of blockchain applications have been implemented.

The number of confirmed cases continues to increase, front-line medical personnel are in urgent need of supplies, and the number of reworkers during the Spring Festival is increasing. Today, the situation of the new crown pneumonia epidemic is still not optimistic.

So, what can be done about the highly anticipated blockchain technology?

First of all, there is no doubt that it is the tracking and prevention of outbreaks. The epidemic focuses on personnel, the latest epidemic data, and resource scheduling, all of which are aggregated together through blockchain technology.

According to official data, only two days after launch, the system has gathered 210 data and more than 270,000 data.

It is worth mentioning that the Nansha District Epidemic Prevention and Control Collaborative System also incorporates data visualization technology and uses various data analysis methods such as trend statistics and heat maps.

As a result, information on the development trend of the epidemic situation, hospital beds, epidemic prevention and control materials, and high-speed road entrances and exits became clear at a glance.

It is reported that this platform was developed by the Software Application Technology Institute of the Chinese Academy of Sciences in Guangzhou and its incubation enterprises. It only took 72 hours from the start to the launch.

On February 3, Linfen Street, Jing'an District, Shanghai launched the "Smart Pro 2" platform. More than 20 communities in the street, 688 merchants, and mask appointments of more than 20,000 person-times, registration to Shanghai, health check-in, visitor registration, and community care services can all be completed on this platform.

On this platform, a large amount of data is electronically signed and stored by blockchain technology, which cannot be tampered with. In addition, with the help of blockchain, many tasks that require face-to-face contact can also be completed online, greatly reducing the risk of crowd contact.

Outside the government, major research institutes are also taking action.

On February 6, the medical artificial intelligence team of the School of Mathematics and Statistics of Xi'an Jiaotong University stated that it had urgently developed an online consultation and new crown virus risk screening system for the Second Affiliated Hospital of Xi'an Jiaotong University. The system background supports blockchain technology for patient medical records management.

"In the chaotic scene of emergencies, blockchain technology has already played an important role in providing 'trust' in actual combat," said Gong Yue, a practice professor of management at CEIBS.

"Not only the handling of epidemic prevention materials, but also the use of blockchain technology to create credible and supervisable processing solutions in areas that require 'trust' and 'collaboration', including social resource management configuration, smart cities, modern governance, etc. It is the general trend, "he said.

When the epidemic is over, there may be more people from governments, regulators, and medical institutions to rethink the value of the blockchain and use the blockchain to upgrade the governance model.

Before the troop arrived, the forages went first. The front is in Hubei, and the deployment of medical supplies in the rear is also very important.

The Hubei Red Cross Society was caught in a public opinion turmoil because of untimely dispatching of supplies in the frontline of epidemic prevention.

A few days ago, many companies such as FunChain Technology, Inspur Group, and Hangzhou Complicated Beauty have successively released blockchain public goods circulation platforms in an attempt to solve the trust problem. 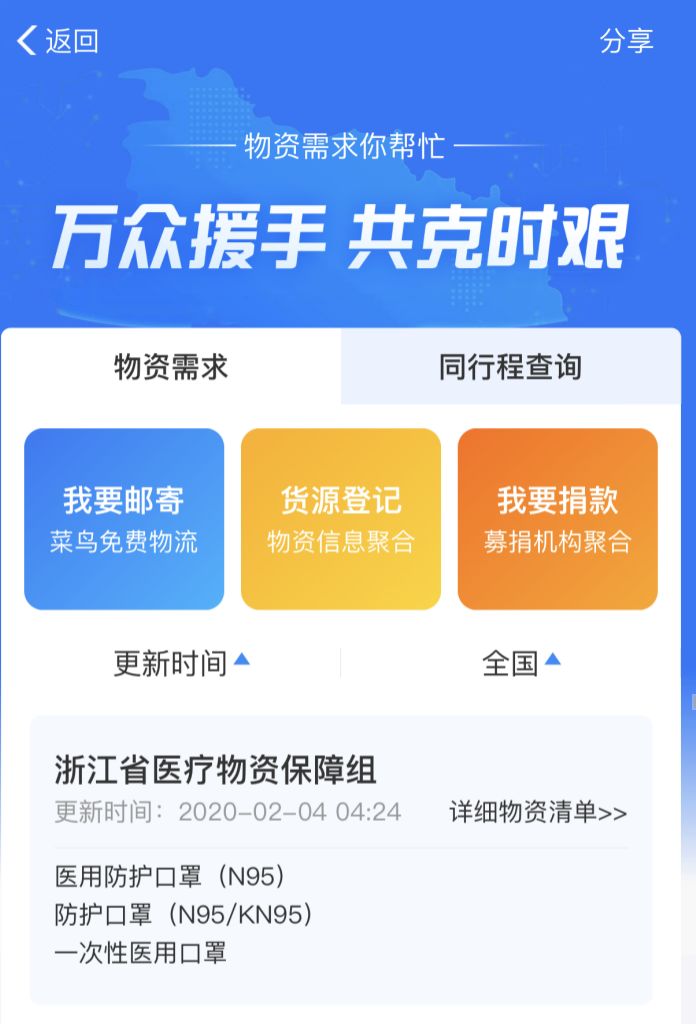 According to Alipay, the platform will review the information on the demand, supply, and transportation of materials, and store the certificate on the chain without leaving any links in the black box.

In addition to the untimely deployment, there is another reason for insufficient medical supplies, which is insufficient reserves.

On January 29, Minister of Industry and Information Technology Miao Wei publicly stated that the maximum production capacity of Chinese masks is more than 20 million pieces per day. Recently, Foxconn, BYD and even diaper manufacturers have produced masks across borders, but the public is still "difficult to find."

The mask manufacturing process is simple, and it is not difficult to expand the production capacity. But usually, people do not have much demand for masks, and many mask factories even closed down for a time. How to adjust the production rhythm according to market demand and inventory is a major problem for mask manufacturers.

In this regard, blockchain technology has brought solutions.

The subject undertaken by the blockchain enterprise consensus data is to explore how to use blockchain technology to achieve information collection of shortage drugs, and to guide the research and development, production and allocation of drugs.

On this basis, the platform can re-mine the data to produce prediction results to guide drug production and deployment.

"In this process, the biggest significance of the blockchain is to break through the data barriers between various institutions." Said Wang Maolu, the founder of the consensus number letter.

Compared with the traditional single point collection, the blockchain is more efficient, and it also solves the problem of data privacy protection.

"Now, the attitudes of the medical and pharmaceutical industries towards blockchain are very positive." Wang Maolu said, "whether it is the Health and Medical Commission or the Pharmaceutical Regulatory Bureau, the exploration of blockchain was started a year or two ago."

Blockchain practitioner Li Qiang told a blockchain that they are working with medical device companies and a local prevention and control department to discuss the feasibility of a blockchain thermometer.

With this tool, the disease control department can collect real data without having to visit the site.

In fact, as early as 2018, the Brazilian research institution FGV Foundation began to study the role of blockchain technology in the prevention and control of infectious diseases.

Researcher Flavio Codeco Coelho of the institution pointed out in a paper published that year that using blockchain technology, people can create powerful, open, transparent and low-cost disease monitoring solutions.

In the same year, Jia Bainga Kangbai, a tropical infectious disease scholar at the University of Munich in Germany, proposed a set of blockchain systems for tracking the Ebola outbreak—SERIS.

Ebola virus is a severe infectious disease virus, named after it was found in the Ebola Valley in Africa in 1976. It has ravaged many African countries with a fatality rate of more than 50%.

The function of SERIS is to build an intelligent database to mark Ebola's confirmed and suspected cases and aggregate them through the Internet.

Among them, the role of the blockchain is to break through the data barriers of various departments, upload the information collected by the Internet of Things, and improve the true reliability of the data.

In the recent epidemic of new crown pneumonia, there are also international companies using blockchain technology for epidemic tracking.

HashLog data is collected from the World Health Organization and disease control centers in various countries and regions, and can display real-time crown virus data and trends.

Hedera Hashgraph is a public chain, which is also called "Hash Graph Consensus" in China. HanceLog consensus CEO Mance Harmon said in an interview with the media that HashLog uses blockchain technology as a trust layer to ensure the credibility of the data.

"Health care and public health information security are key areas for the implementation of blockchain technology." He said.

The virus is fierce, and the whole country is fighting against the "epidemic."

Black Death, smallpox, cholera, plague, Ebola … In a sense, the history of mankind is also a history of fighting the epidemic.

Clean environment, physical isolation, taking drugs, vaccinating … In order to fight the virus, people have racked their brains and come up with various methods.

Today, they have a brand new tool: blockchain.

The virus will not disappear, but with the help of blockchain, the virus's epidemic may be more effectively suppressed.

Tsinghua Zhonghong: Blockchain industry will usher in three development opportunities, such as the construction of uplink infrastructure