Bitcoin completely ignited the entire currency. According to informed sources, the bitcoin fire may have spread from the stock market. On March 30, the National Internet Information Office released the first batch of 197 blockchains. The information service name and filing number, this news completely activated the market enthusiasm. On April 1st, the A-share market blockchain concept stocks rallied, and the stocks and other stocks were up, and the market sentiment of the blockchain rose. After the blockchain was successfully introduced, researchers from many brokerage companies including Guosheng Securities and Founder Securities used weekends to conduct roadshows and explored A-share market related concept stocks through conference calls. At the same time, the private road show was also full. Private equity believes that if the blockchain whirlwind of the A-share market is the blockchain of some listed companies in the beginning of 2018, then this wave is the state of industrial capital entering the positional battle. As the industrial capital enters the market, the enthusiasm of the market will naturally be ignited, and the top-ranking targets of the market capitalization will rise sharply. The total market value of the global digital currency will return above 170 billion US dollars, and the USDT off-market premium will be close to 2%. The market is hot. We also mentioned in yesterday's analysis that although the small currency has a large increase, it is not recommended for everyone to lay out. Now it is a moment for an elephant to dance. Pay attention to the drop of the small currency brought by the siphon effect. The current plate round Move clearly, pay attention to the rhythm.

BTC inverted flag formation has formed a perfect breakthrough. This long-lost big Yang line has also completely activated the popularity of the market. The moving averages are arranged in a long position. The macd indicator is diverging above the zero-axis, and the kdj indicator is diverging upward. Breaking through the boll online track and maintaining a strong feature, we mentioned that the pressure level at the break of $4,300 must be heavy. At present, the volume and price match perfectly, and it is bullish to $5,900. We are still ready for both hands. We take this big Yangxian line. Half of the position as the exit point, the break is to leave. 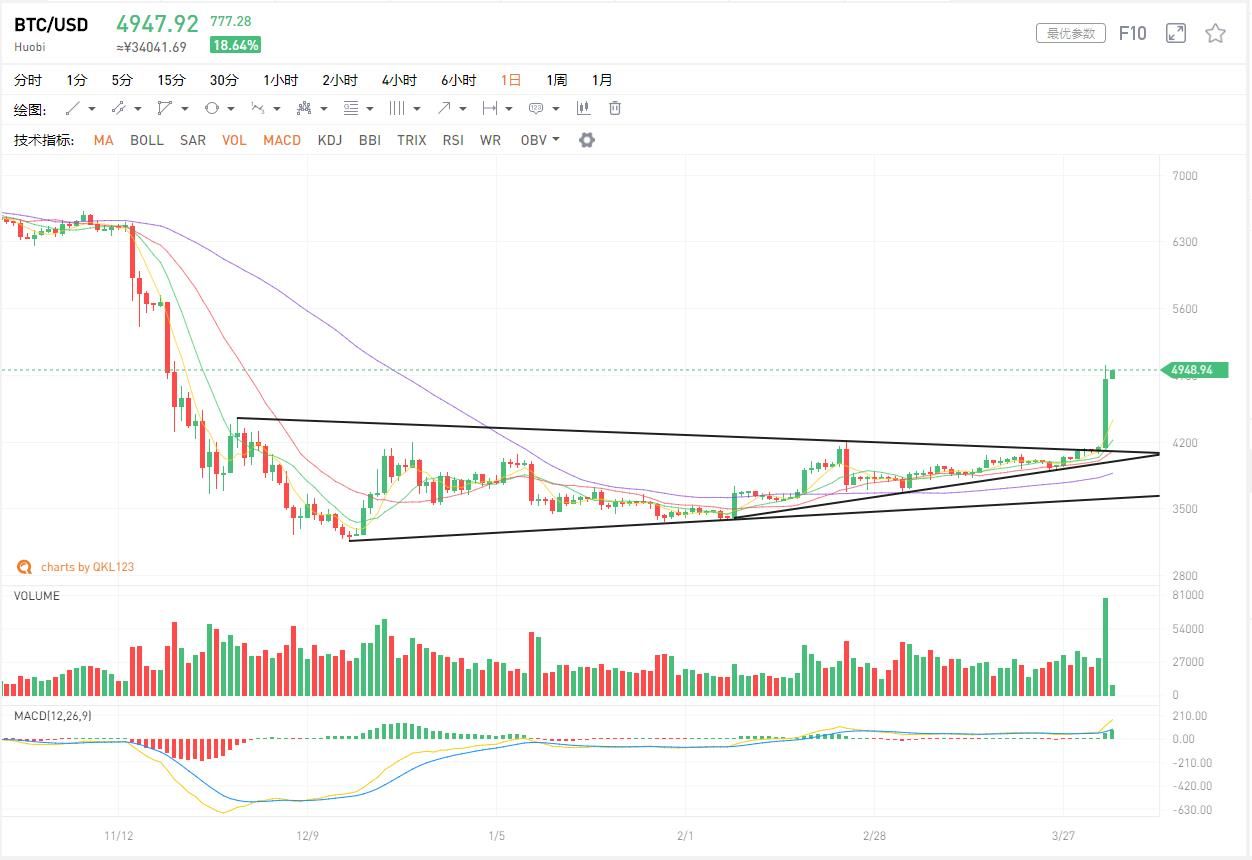 The start of ETH's current round is relatively lagging behind, so judging that the target of this round may be just a follow-up trend, it will not be the protagonist. The rise of platform coins in the near future is a real negative for the target. It has already exceeded $147. The pressure of 170 US dollars has not yet formed a breakthrough. Observe the observation that the breakthrough failure may return to the important support level of 127 US dollars, and it will leave if it falls below. 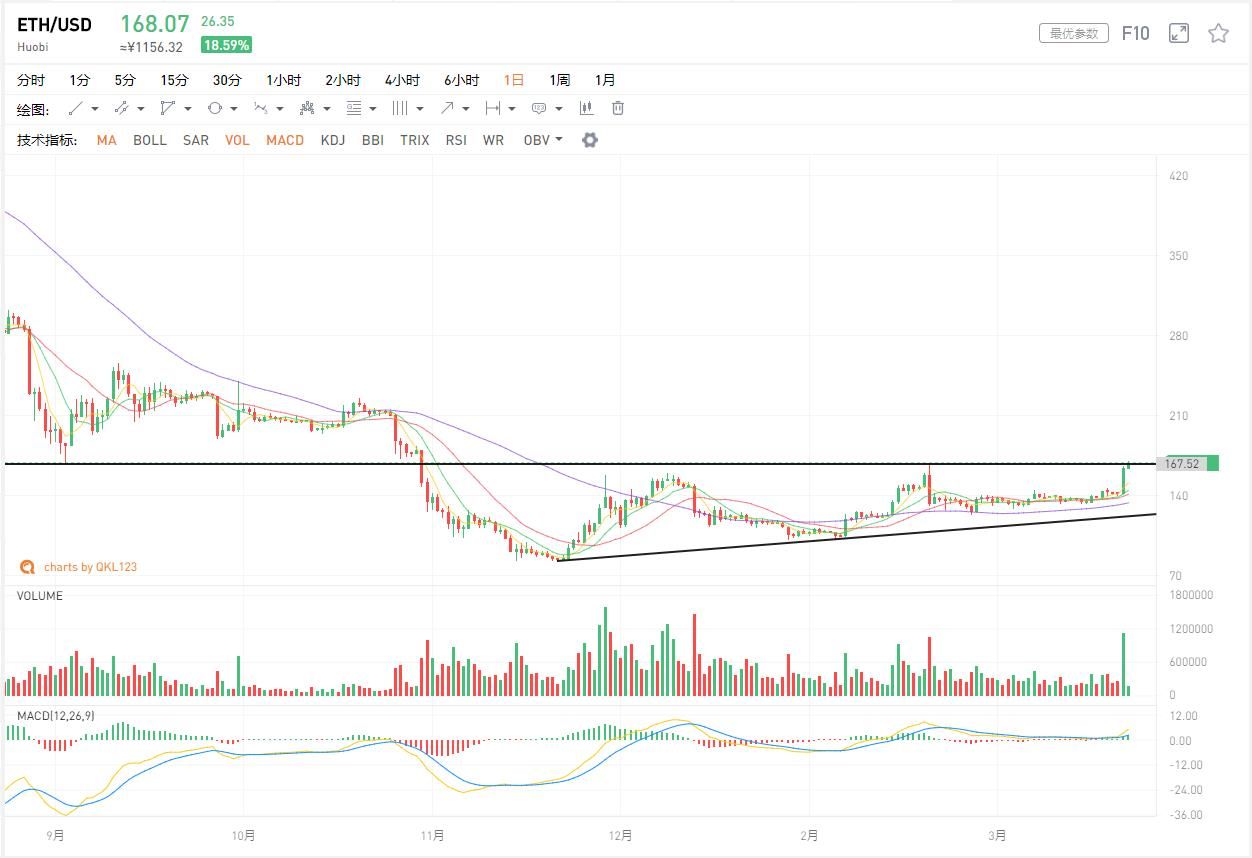 XRP mentioned in our analysis yesterday that we will choose the direction very quickly. We tend to go up. A big Yangxian line went up yesterday, and with the enlargement of the volume, the macd indicator returned to the zero axis. And the golden fork is diverging upwards, and the moving average starts to diverge upwards under the driving of the Yangxian line. The trend is upward, paying attention to the pressure at 0.41 US dollars. LTC used the big Yangxian line to regain the position of the fourth, and it seems that the position of the fourth is quite fierce. As we mentioned earlier, the target has been basically adjusted, and we believe that the market has a higher probability of choosing to go up again. The US dollar is actively doing more, and the market is also very strong. There is a big Yangxian line. At present, the support of the target is around US$75, and the pressure is around US$90. It is expected to fluctuate for a few days around US$75-90, effectively falling below The $75 exit is on the sidelines, and the break of $90 continues to be bullish to $110. 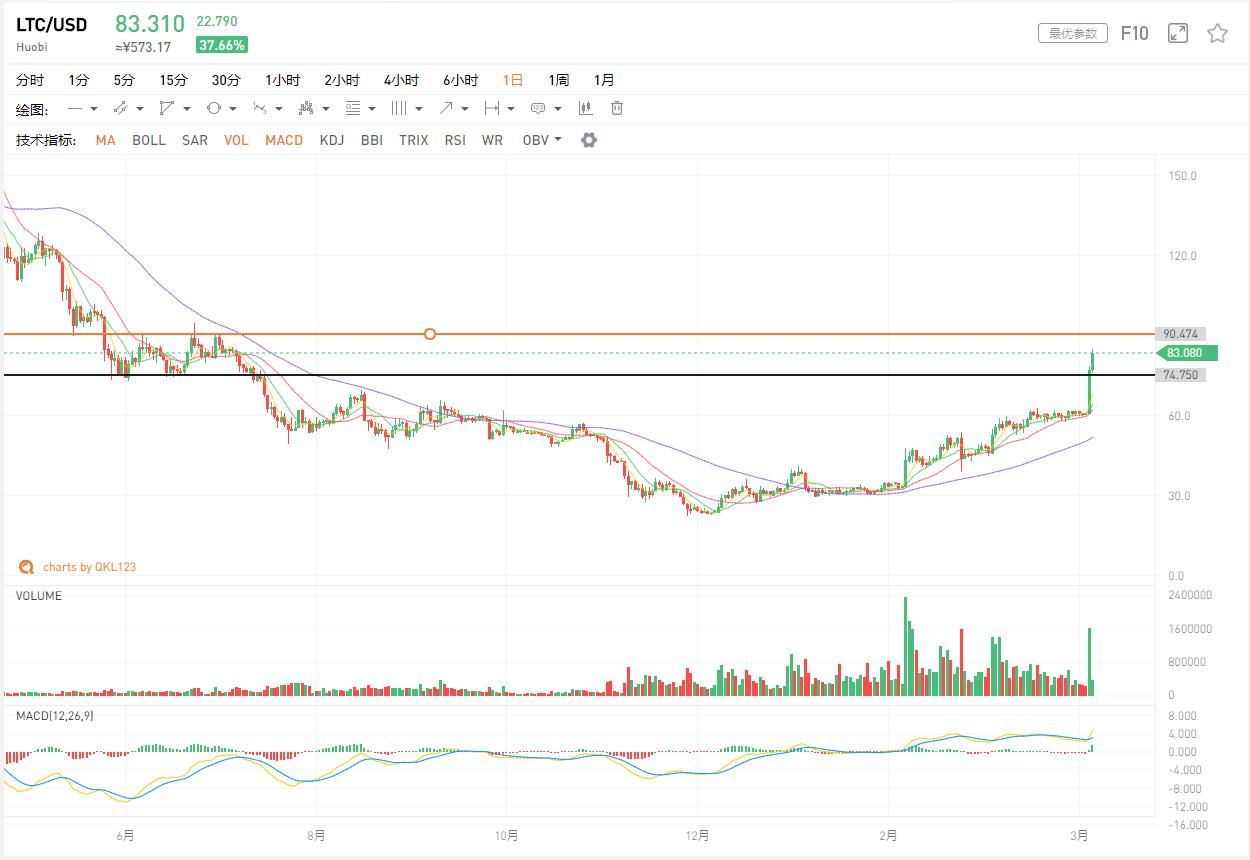 BCH has an amazing increase. After immersing for a long time, it finally ushered in a giant sun. The target is more optimistic. Its next target is at $410. The space is big enough, but it may face $310. Pressure, pay attention to whether the pressure point can pass smoothly, the lower support level is near 226 US dollars, the probability of falling below the support point is very low, reaching the point to pay attention to low suction. 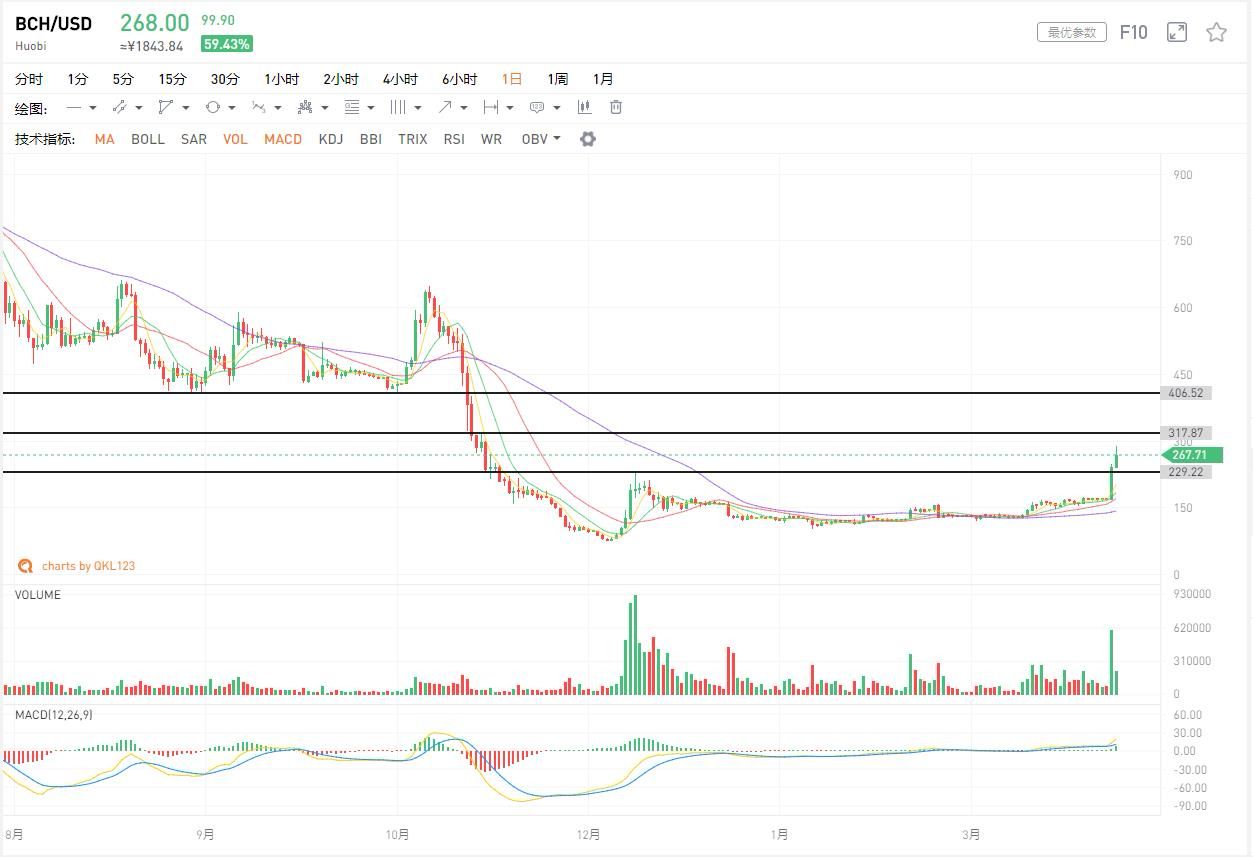 EOS faces a lot of pressure on the left side and may oscillate upwards, but the rhythm should not be too fast. Pay attention to the pressure of 5.8 USD above, the support level is 5 USD, and if it falls below 5 USD, you need to lighten up. You may step back. An important support level of $4.40. 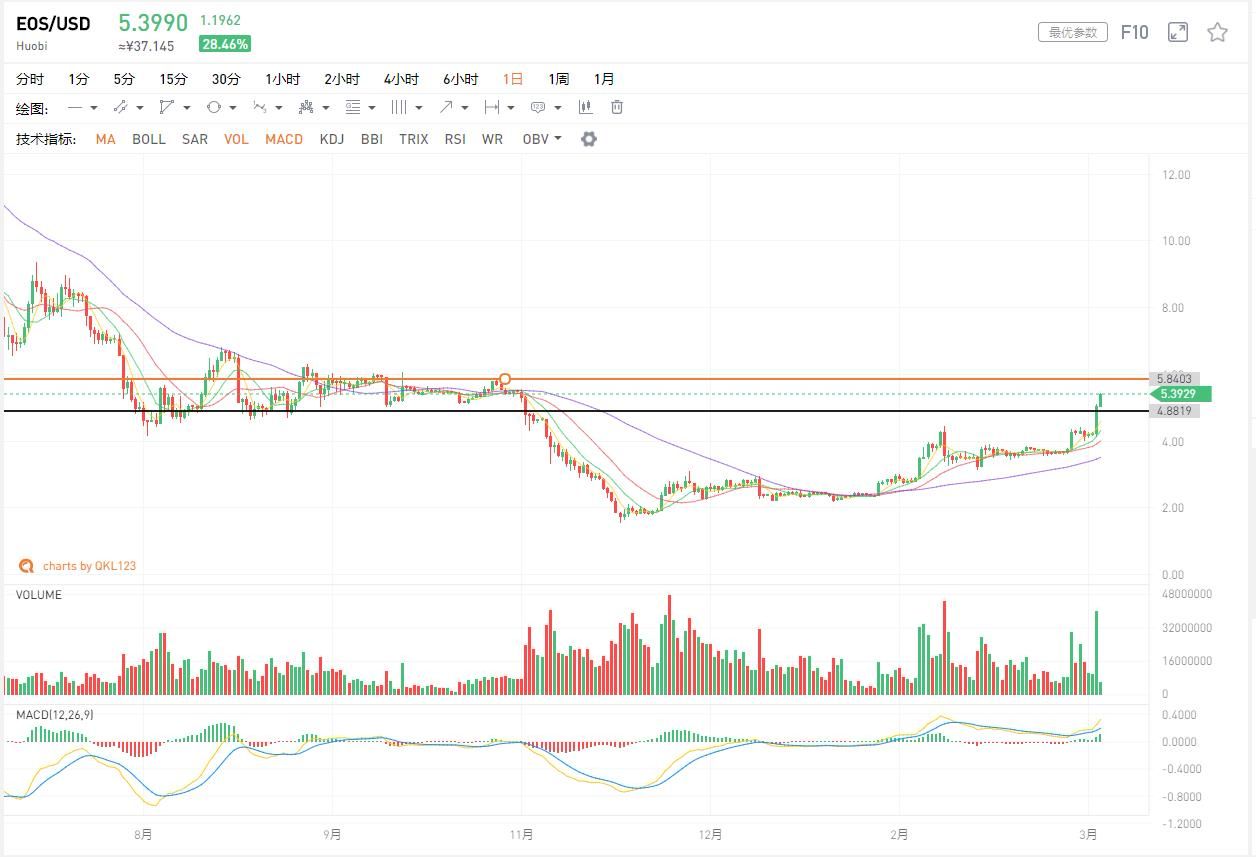 TRX has constructed a large head and shoulders. At present, the right shoulder has been basically completed. It has already reached the neckline at the bottom of the head and shoulders. Concerned about whether it can be broken. We think that the breakthrough is a matter of time. How can the target like this be possible? Missing such a feast, the macd indicator reached a strong area above the zero-axis, the moving average system diverged upwards, and the trading volume was effectively enlarged. After breaking the neckline position, it could actively do more, set a stop-loss position, and effectively fall below 0.022 US dollars. . 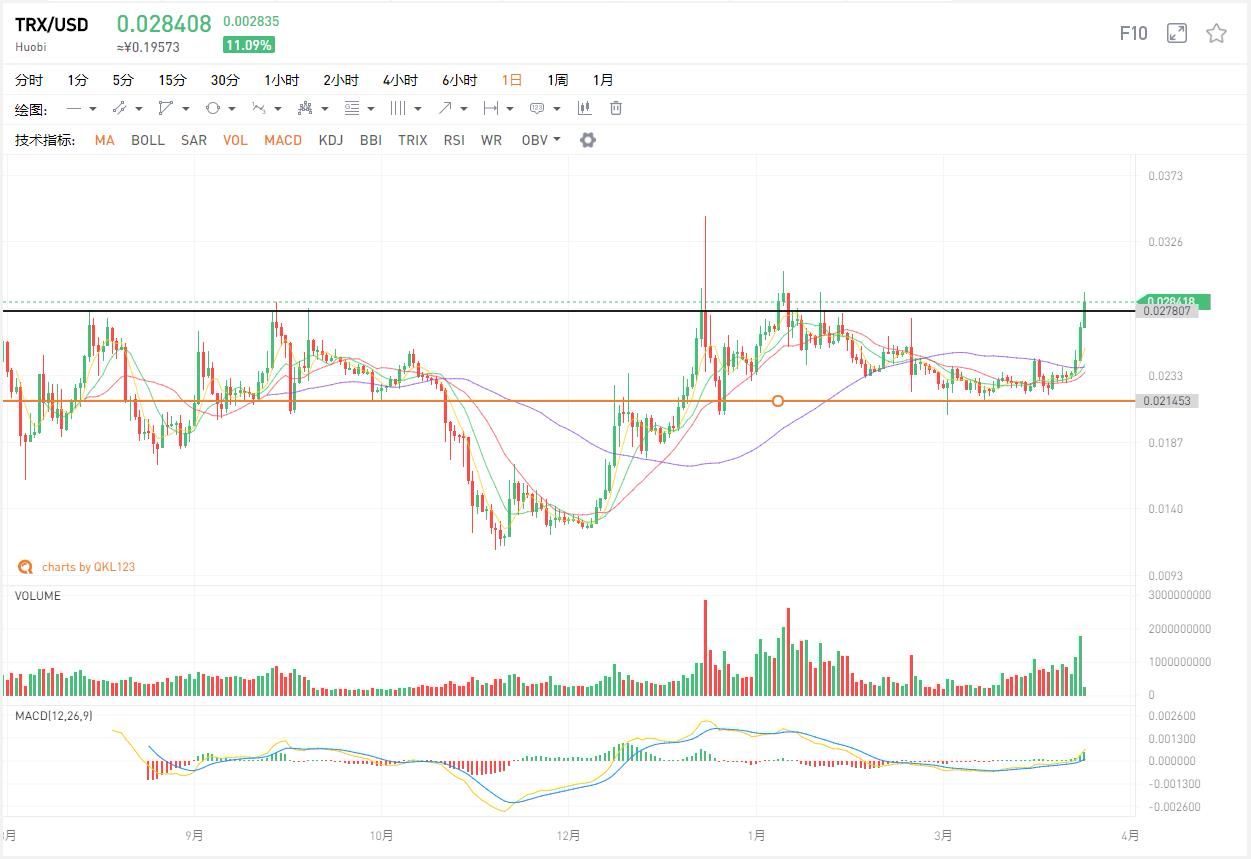 HT has fallen against the trend today. It has not yet broken below 5 antennas. It still uses 5 antennas as the signal of the target's strength. If it falls below 5 antennas again, it will reduce its position. If it falls below 2.4 US dollars, it will leave the market. It has not broken through 2.8 dollars. The pressure level, effective breakthrough of 2.8 US dollars of rising space will open, in the case of such a strong market, top did not follow the rise, has penetrated 5 antennas, the trend is weak, and pay attention to the second line of the fire currency preferred channel Target performance (mid-April). 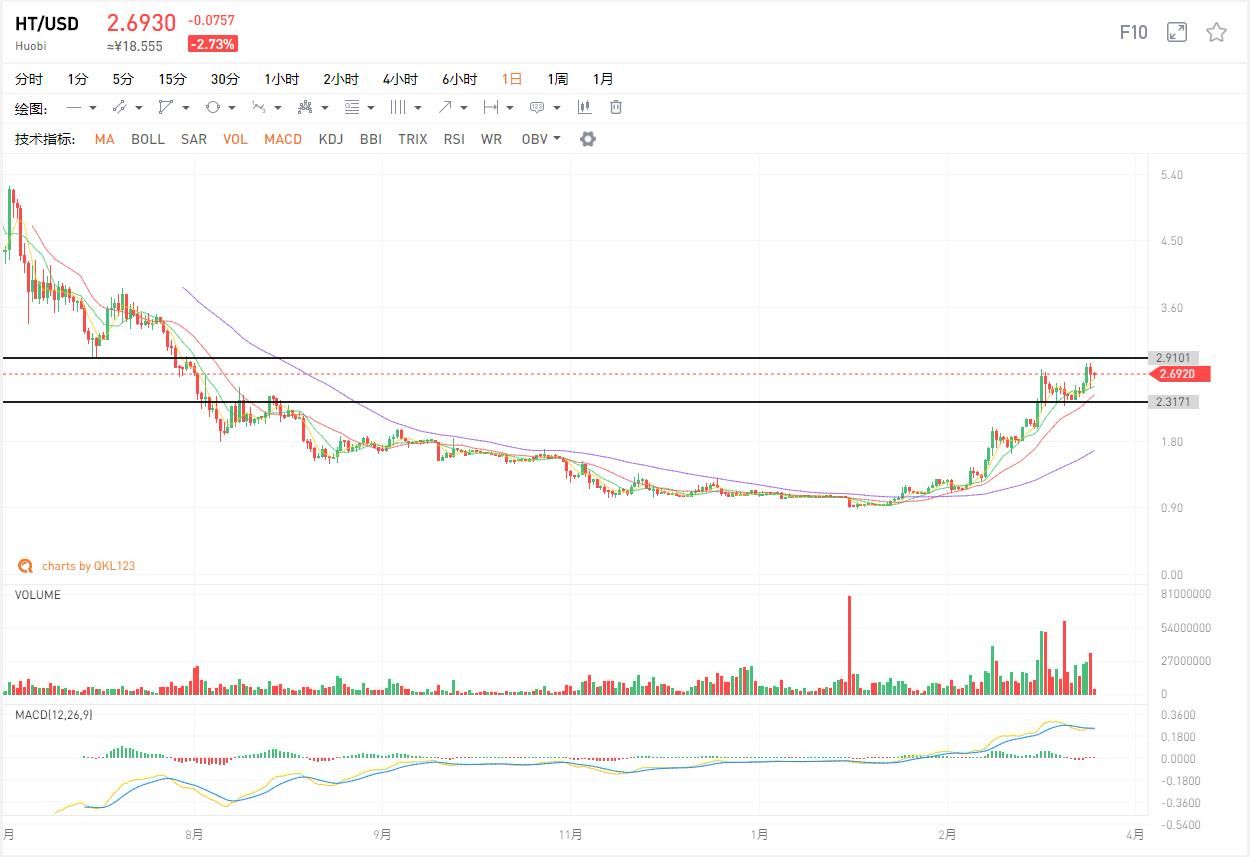 Chief economist of Wanxiang Blockchain: General Certificate can have the meaning of assets and liabilities

CEO of Calibra: Bitcoin is similar to digital gold and is completely different from Libra