Data behind the seven production-reducing coins: the average price of coins rose by 143%, and the mining revenue rose by an average of 77%

The general significance of production reduction is to control inflation and stabilize value, thereby promoting the stability of the blockchain network. There are also opinions that reducing production can make cryptocurrencies have attributes similar to precious metals such as gold, in exchange for scarcity for use value and storage value.

In addition, among the cryptocurrencies that will be reduced this year, BTC, BCH, BSV, ETC, DASH and ZEC are among the top 30 in market capitalization (ranked by CMC on February 10), which is significant in the "Eighth Eighth Effect" In the cryptocurrency market, changes in these head assets may also have a greater impact on upstream and downstream industries such as mining and trading.

BTC halved twice, the price of the currency rose significantly, and the number of transactions on the chain rose steadily 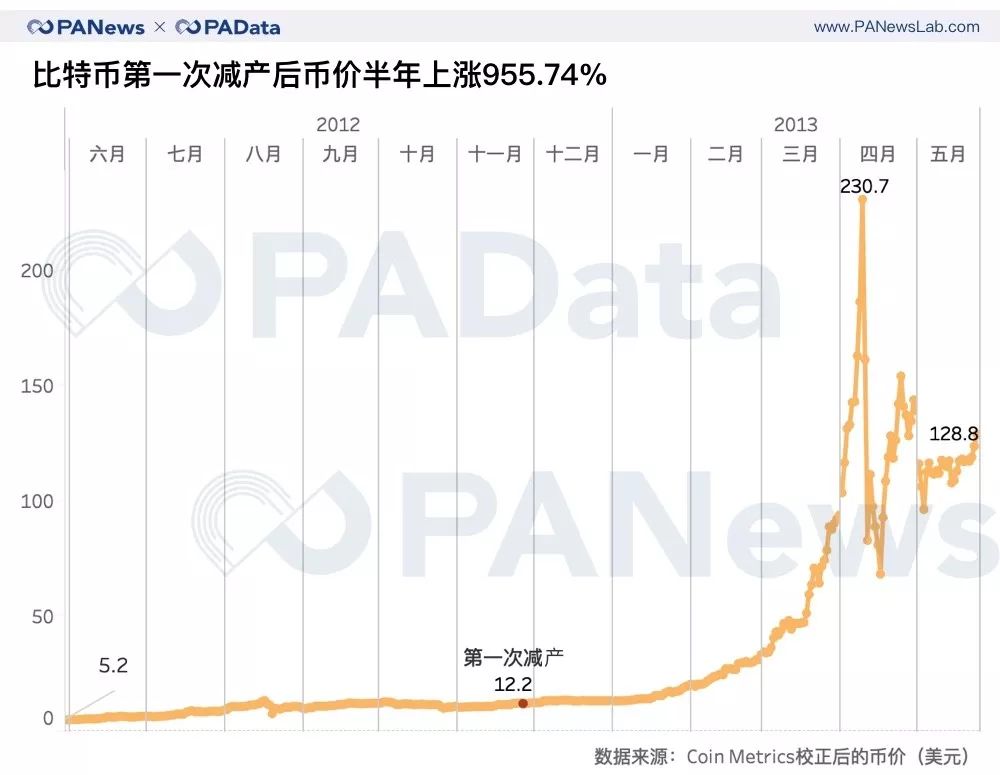 For the first time, the price of Bitcoin has risen significantly. But in the second production cut, the "halving market" was much milder. 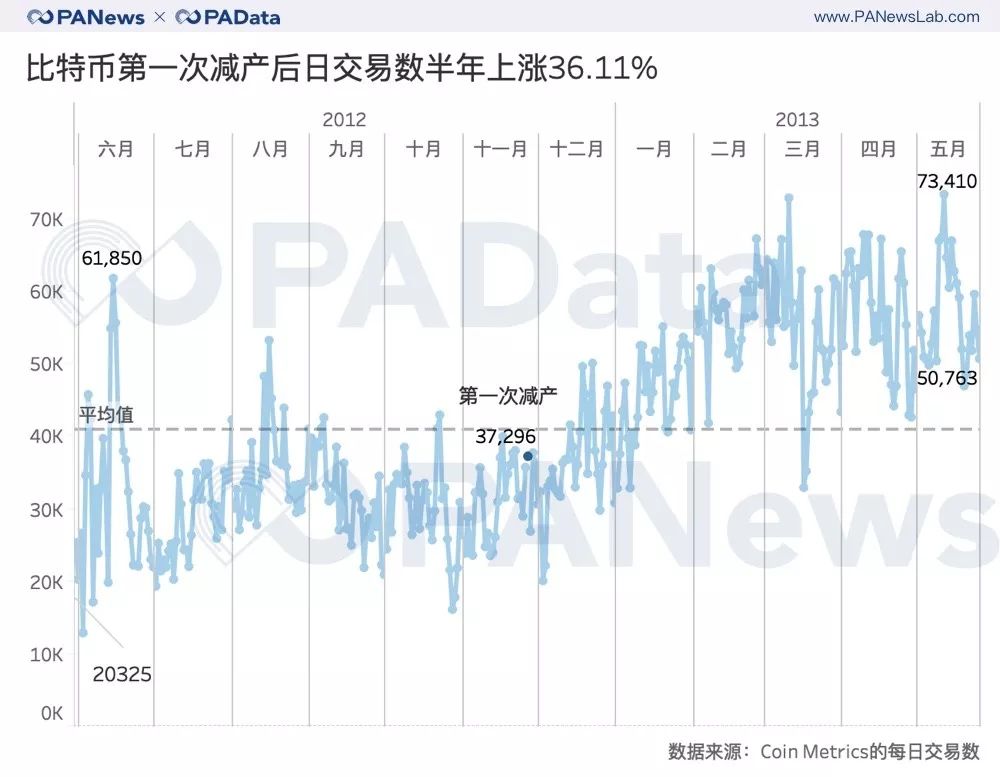 However, during the second production reduction period, the daily transactions of the Bitcoin network always fluctuated around the average value, and the half-year increase was also lower than the first half. The total number of on-chain transactions on the day of the second production reduction was about 220,800 times, which rose to 281,700 times after half a year, an increase of about 27.98%. 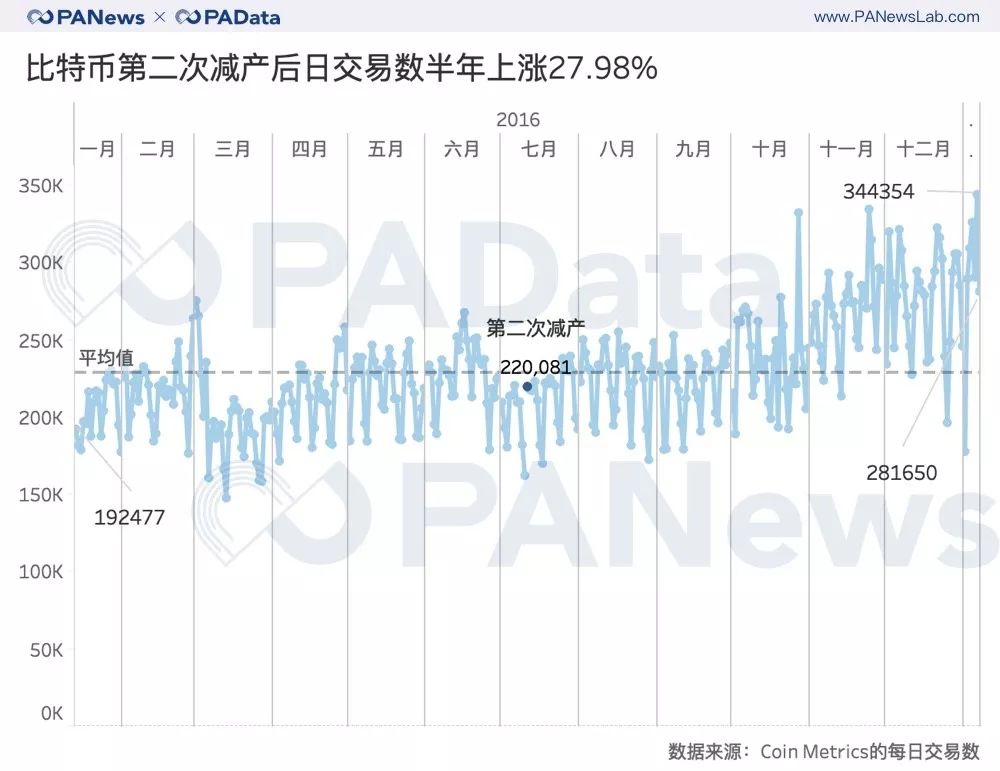 The second halving caused a 13% drop in mining profits

The reduction in production directly affects the mining income of miners. According to the statistics of BitInfoCharts, at the time of the first production reduction, BTC miners can earn $ 3,655 per T of computing power per day. During the first half of the production reduction, the miner's income was basically stable. After the reduction in production, the mining revenue has dropped significantly, from 3,655 USD / T to 1,778 USD / T, and the total decline over the three days is about 51.35%. But since then, mining profits have rebounded rapidly, rising by 53.43% in 180 days, up to 13352 USD / T, and the highest increase is about 256.31%. According to statistics, the average daily transaction fee for each transaction when Bitcoin was cut for the first time was approximately 0.0091 USD, which rose to 0.1195 USD in the first half of the year after the reduction, an increase of 1213.19% and a maximum increase of 1762.64%. 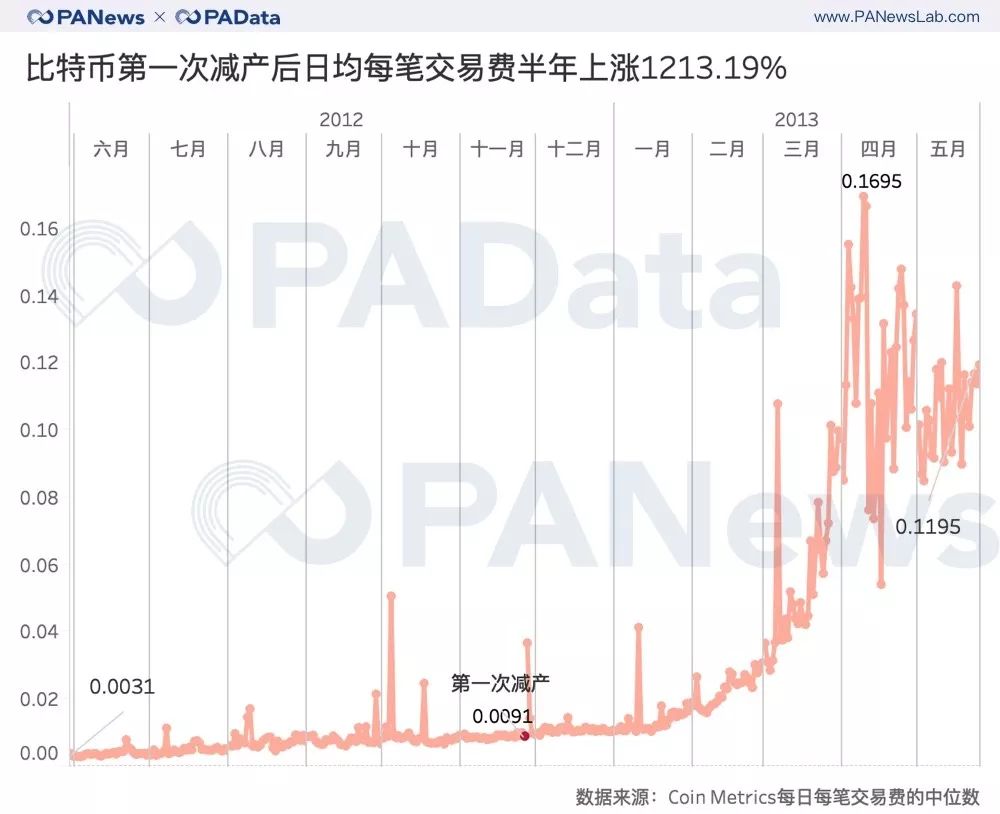 This year, the production price of currency has been reduced by 143%.

BTC will usher in the third halving this year, and DASH will usher in the sixth halving this year, but in addition, BCH, BSV, ETC, etc. are all halving for the first time. Although each cryptocurrency has its own characteristics, considering that many of the production-reducing coins are forked coins of BTC, and the current market value of BTC always remains above 60%, which has a strong impact on other cryptocurrencies, so BTC ’s The impact of historical output reduction may be of some reference. So, how has the mainstream production-reducing currency performed since entering the year of production reduction? What are the possible future trends?

Since entering the production reduction year, affected by the concept of "reduction in production", the currency prices of the seven major production reduction coins have all risen. From January 1st to February 5th, within a month, BTC rose by 34.27% to reach 9,628 US dollars. As of press time, BTC had reached the US $ 10,000 mark, and the upward trend was obvious. And the current increase is still lower than the previous two cuts in the first half of the increase. 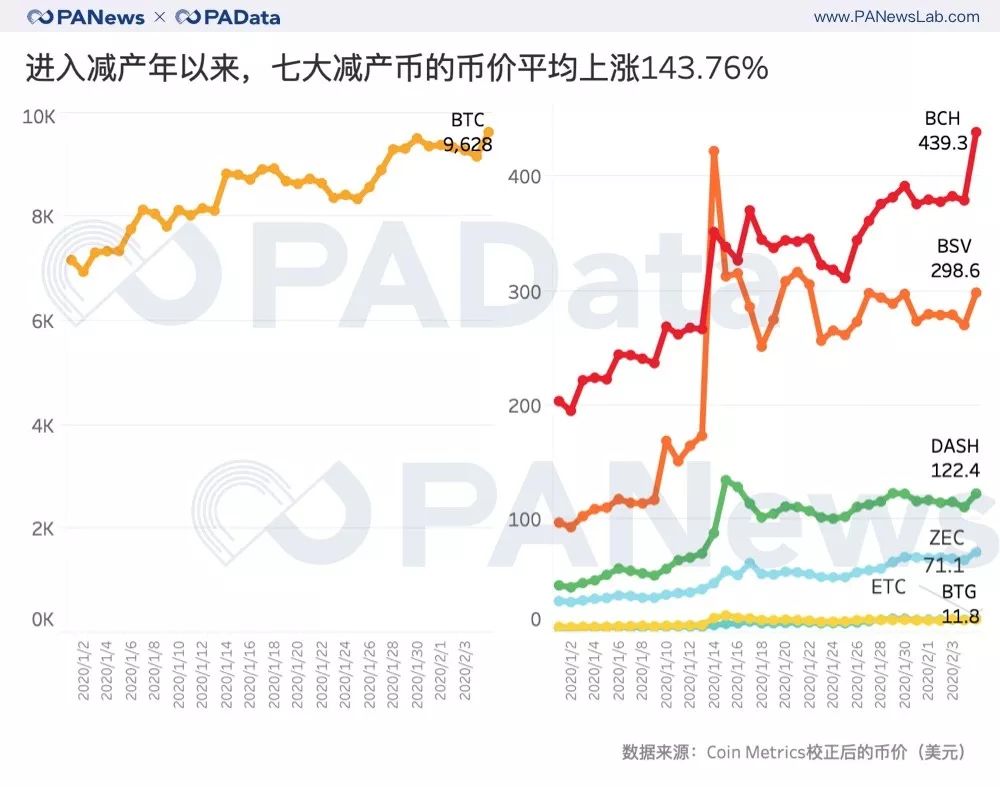 Although the currency prices are constantly rising, from the data on the chain, the current daily transactions are basically stable. Only BTG and DASH have a higher number of daily transactions on individual days, but they have immediately recovered to the average daily level. . 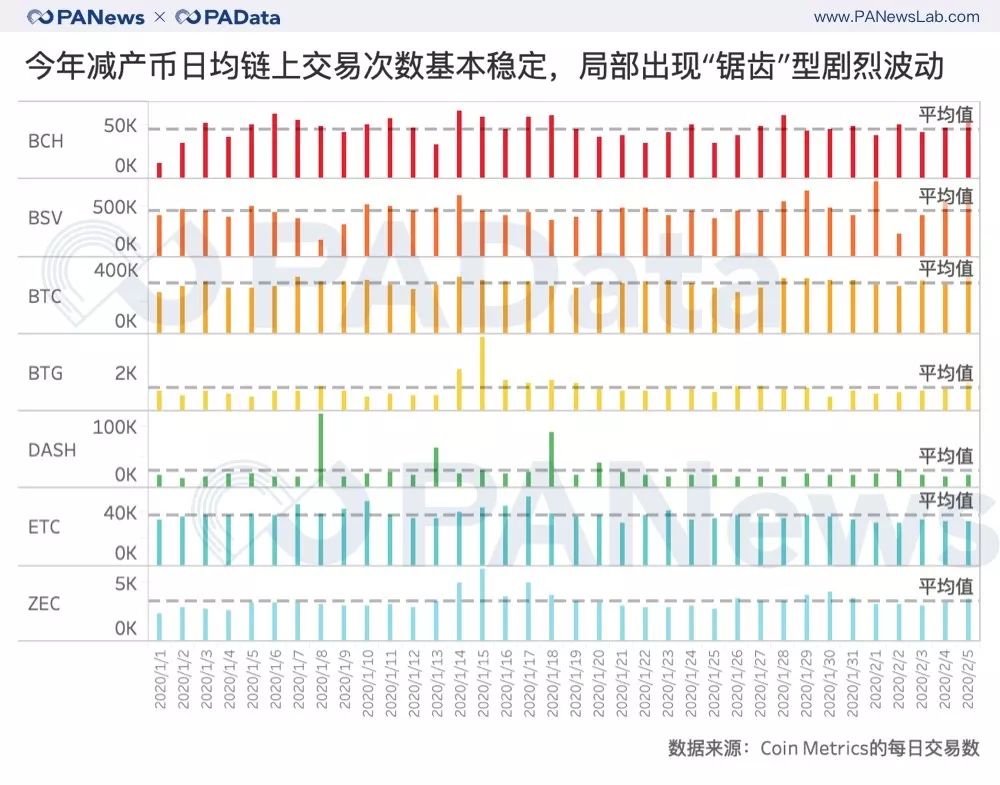 Judging from the average daily transaction fees, the average (median) transaction fees of the seven major production-reducing currencies this year have increased by 176.13%. Among them, BTC rose from 0.2815 US dollars to 0.6627 US dollars, an increase of 135.46%, the increase has exceeded the level at the time of the second production cut, and it is also much higher than the increase in the price of currency. 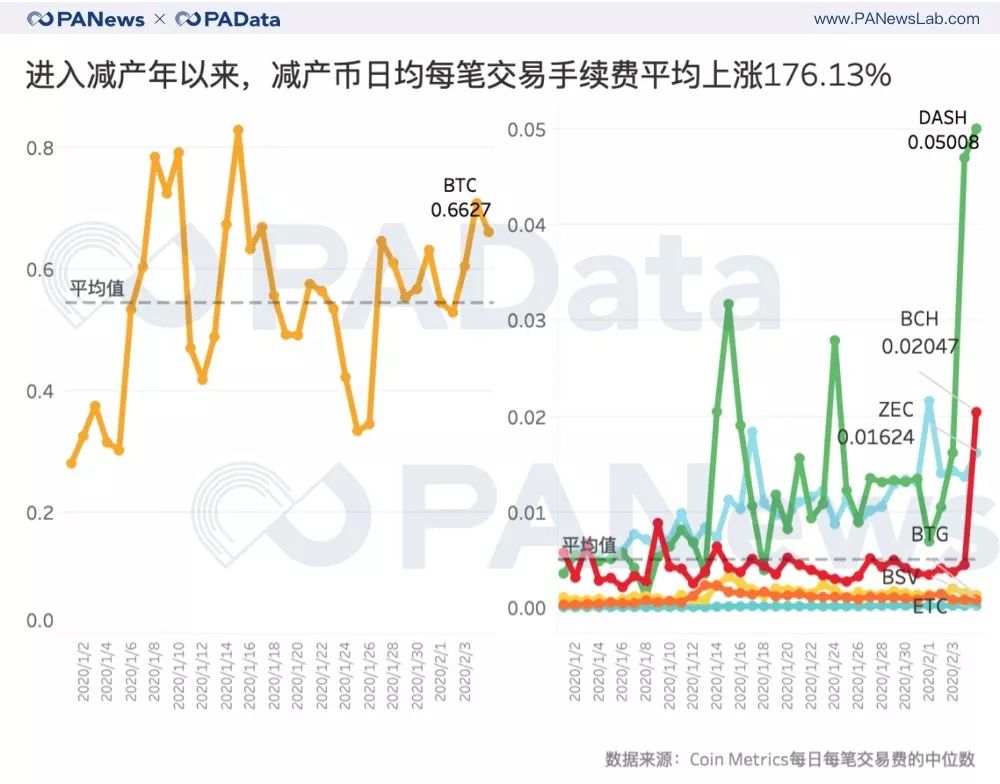 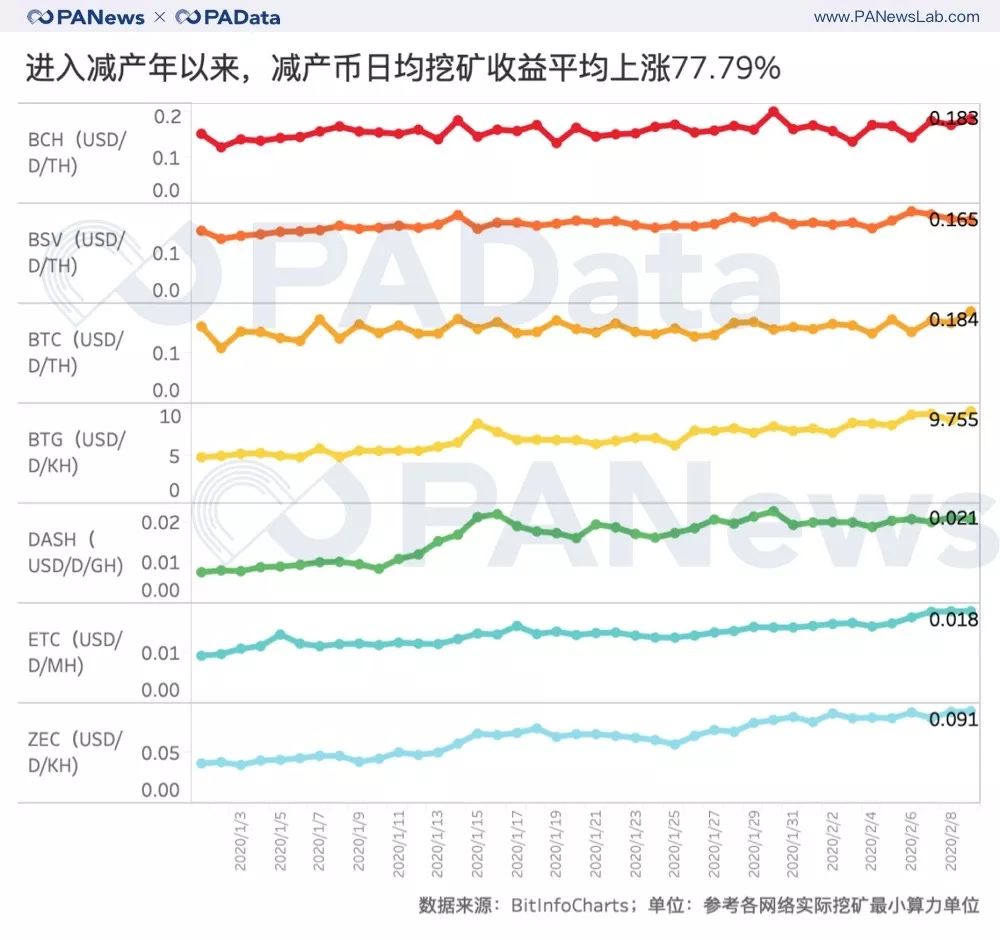 It is worth noting that after the second production cut, BTC saw a cliff-like decline in mining profits, and failed to return to the reduced production level within six months. However, the country is currently affected by the new crown epidemic. The three major ASIC miners such as Shenma Mining Machine, Bitmain and Canaan Jianan will have issued announcements to postpone production, delivery, and after-sales time. The computing power may mainly come from the stock market, and the limited growth of computing power may add more uncertainty to BTC's production reduction.