Communities are always defined by narrative and then by reality.

The core asset of cryptocurrencies is narrative. Early community participants often sell to others through word-of-mouth, rather than rigorous academic papers, lengthy product descriptions, or intensive technical documentation. Widespread communication will bring a wide audience, like-minded audiences will become loyal fans, loyal fans will have opinion leaders, and a thousand opinion leaders will bring a thousand different narratives. The narrative theme of Bitcoin has changed from the early "a peer-to-peer electronic cash system" to the "dark web hard currency" to the later "digital gold". "Application Platform" and later "Open Financial Platform", the narrative theme of Bitcoin and Ethereum advancing with the times has also nurtured the development and growth of the community, and it has become more and more diverse under the collective narrative of ten million coin holders Stories, increasingly network effects-this is where the community lives.

Robert Shiller put forward the concept of "narrative economics" in the past two years. Cryptoeconomics and encryption technology are important, but if you can't build exciting narrative content, you can't stand out from thousands of narratives and shouts And get the attention of the community. Over the years, the community's vast narrative themes include better Bitcoin, bigger roast cats, updated ICOs, faster Ethereum, more fun Cryptokitties, more compliant USDT, more localized Binance, The more decentralized Internet, the more global sovereign currency, etc., what will be the next narrative theme? How long is Mr. Market's memory cycle, and what is he sensitive to and numb to, and will the fiery theme come back?

If you can't condense the strategy into a slogan, it can't be communicated to the earliest people in the community.

Let's start with a slogan that is worth a lot of money-a slogan is a shortcut for the community to reach consensus . When we launched the oppressed people's revolution, we said, "Cangtian is dead, Huang Tian is standing." When we launched the hundreds of millions of peasant revolution, we said, "strike the tyrants and divide the fields." So what interesting slogans have appeared in the crypto world? Let's look at the two main lines of Bitcoin and Ethereum: 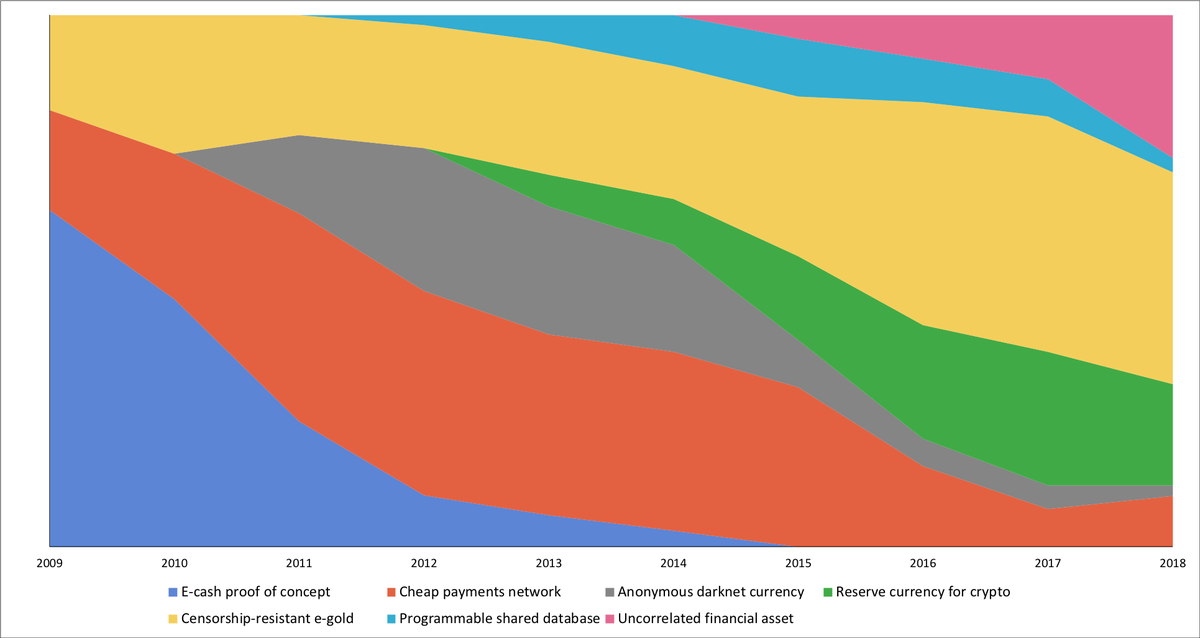 In the past ten years, our narrative about Bitcoin has been divided into the following topics:

Grin: Three non-explosive BTC2.0 (no pre-digging, no ICO, no investors)

XRP: The era of wild digital currencies is over, let us go hand in hand with top financial giants

Stellar: XRP is a cruel harvester, let us airdrop to people all over the world

Doge: Meme's virus spreads us all over the Internet

Ravencoin: knock down ASIC miners and make bitcoins that can issue assets

Tether: The stablecoin we all use

Binance: the value of the world's largest exchange

Dash: Fast and convenient for privacy, go deep into the grassroots for marketing

Decred: Bitcoin that can be governed on-chain

Recently, I saw another new bitcoin story in "Wang Tao: A Bird's Eye View of the Digital Asset Market Classification": "Energy Black Production-Bitcoin Anchored Energy. Mining machines have become the realization channel of energy rights owners, so mining machines All people are bound. How big an asset can be depends on how many people it can bind. Moutai is tied to many corrupt officials, thereby binding the bureaucratic system and binding everyone through the bureaucratic system. When an asset can bind all People, they will become bulls. "

In the past five years, our narrative about Ethereum has the following topics:

ETC: Ethereum that has never been tampered with in the parallel world, insists on being a POW Ethereum

EOS: Blockchain 3.0, Million Ethereum, the largest ICO in history, leveling the SEC to the outside world, taking turns to be the king inside

Tezos: Ethereum that can be governed on-chain

ChainLink: an off-chain data provider that everyone needs

Steemit: a content platform for everyone to make money

BAT: The Browser you Control

ICO: Great Leap Forward for All

From HODL to BUIDL: Memes and Distributed Networks, Part-1

Think of every competing currency as a scam

Wang Tao: A bird's eye view of the classification of digital asset markets

Data: Bitcoin and Chainlink have the most profitable investors in encrypted wallets with positive balances

CEO of Circle: The encryption field should have special regulatory rules instead of being incorporated into the existing financial regulatory system.

CPPCC members suggest: To help the construction of the "Five Centers", Shanghai should actively use blockchain technology