The top ten characteristics of the amaranth in the currency circle, how many of you?

Recently, a letter to the CNNS (Coin World) letter from WeChat and friends circle was on fire. After reading this letter, the first feeling is that the project side, the exchange is too human, and there is no bottom line to harvest the leek. Looking back, do you think that the young speculator who wants to blow up the building can't hate it? Use all the savings in the family, superstition, the so-called speculative teacher, blind pursuit of hot spots, borrowing loan sharks, full warehouse stud, and finally thunder, and forced themselves to a dead end. 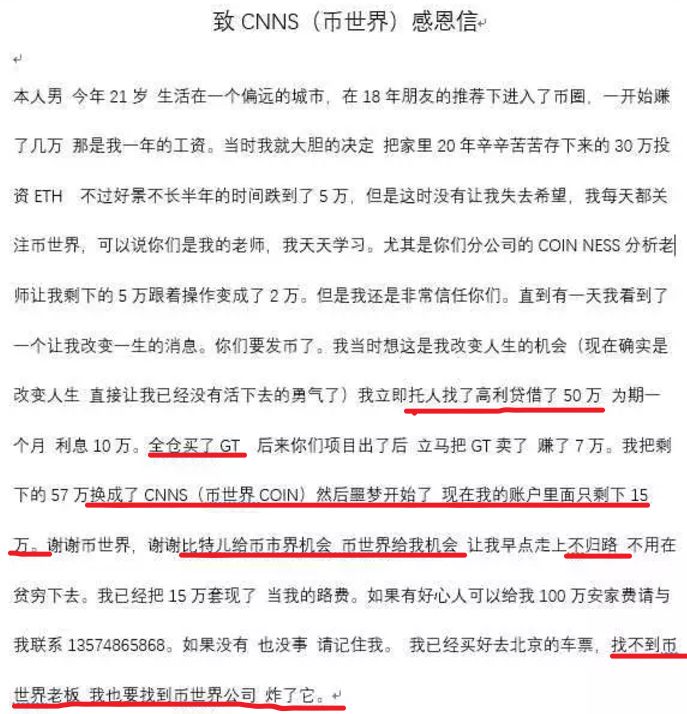 The greedy project party is shameful, and the person who is cut can also hate. In the old saying, poor people must have hateful things. Every scrambler has more or less the shadow of this young man, yes, that is the shadow of a green leek.

When many people mention amaranth, they feel that their personality is insulted. In fact, it is not necessary. Successful investors are not killed from the leek. As a growing amaranth, you can grow only if you recognize your own defects. To this end, I summed up the ten characteristics of the amaranth in the currency circle, and compare them one by one to see how many of them are in order to reflect on themselves.

Ten characteristics of the amaranth

1. Listen to the gossip

The basis of trading coins is basically a big V said, a friend of my circle revealed, a WeChat group said… Learning technical analysis is too difficult, if you don’t get it, you will not be able to draw a tiger, but listen to the news. How simple is it, just ask you to tell me the letter of a token, and immediately stroll, without thinking.

2, frequent trading, chasing up and down

"Ten thousand years is too long, only for the day and night." Value investment for most people can only be talked about. When I first entered the currency circle, I had a very naive idea. So many coins have skyrocketed and plummeted every day. I earn 5 points a day, and after 1 year, I am free. I really did this, trading 50 times a day, buying up and down, and then eating a month of instant noodles in the bedroom that month.

Affected by the big shackles, the Stud blockchain, the big cockroach may be pretending to be full, and we are really full. Full warehouse is like rape. When you can't resist, just close your eyes and enjoy.

When a certain currency rises, it is very tense. In particular, there have been several small rebounds recently. I am afraid that the profit will be retreated, and I will be anxious to shoot. Then I will miss ten times and one hundred times of coins.

I am also such a person. Fortunately, I copied the bottom of Bitcoin 3100. Many coins earned 3-4 times, thinking that I was a master of speculation. In the market environment of rising recovery, one buys up, and there are few misses, and Laozi is the best in the world.

What is the blockchain? What is a smart contract? It doesn't matter if you don't care about it, then you have a dream of counting money. Although the words are ugly, but this is the case, I used to enter because of the rich effect of the currency circle.

8, only know the token letters

BTC, ETH, BCH, these letters are known, what is the lightning network? What is POS? What is the big block? do not know.

I have a heavy currency, how do you sing old, you know a shit, you have not seen so many successful examples… The position determines the brain, has been brainwashed.

Congratulations, you have become a standard qualified leek in the currency circle!

Which segment are you in?

The strongest king. You are the king of the leek, the confidant of all the leek.

Eternal diamonds. The royal family in the leek has won the essence of amaranth.

Order silver. Familiar with the currency loop, consciousness awakened and began to understand and abide by the laws of the market.

Stubborn bronze . It’s only one step away from the leek, but it’s still stubbornly in the leek.