Bitcoin's secret history: 21 million is not the ultimate total of Bitcoin

"21" is a special number in the Bitcoin field, because the BTC network's mining reward will be halved every 21,000 blocks, and 21 million is still the final output of Bitcoin. For a long time, many people have tried to speculate on the meaning of Satoshi Nakamoto's choice of this number; it also gives, for example, 21 is half of the final answer 42 (from the bridge of the ultimate answer in the movie "The Galaxy Walk Guide") Blocks are generated in minutes, the rewards are halved every four years, and the reasoning and guessing are naturally generated. 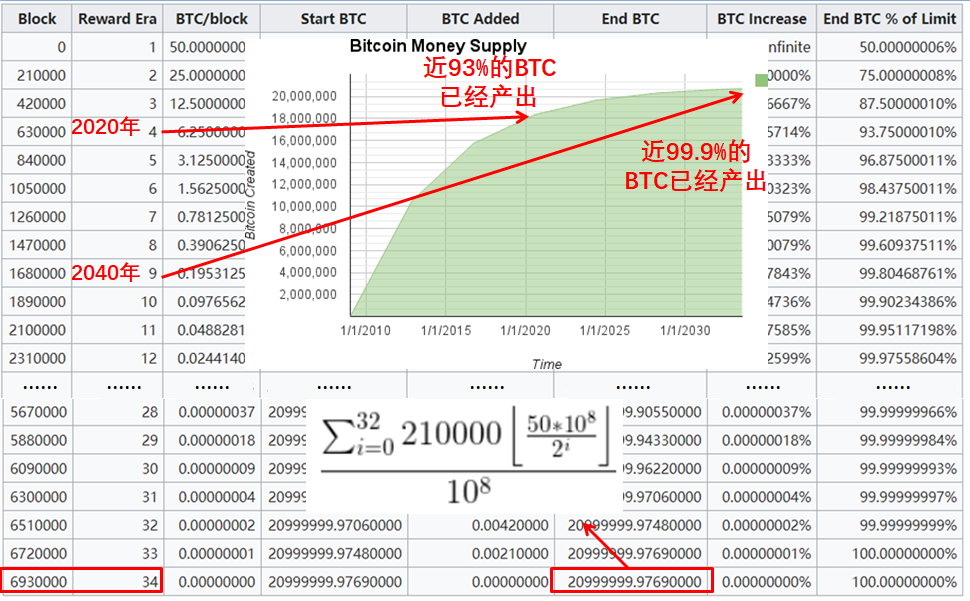 But in a strict sense, the total amount of BTC is not 21 million; just like Bitcoin will be mineless in 2040, the 21 million supply cap is only a rough statement. As shown in the figure above, nearly 99.9% of Bitcoin will be mined around 2040; however, until 2140, that is, after the BTC network has experienced 34 block reward halvings, Bitcoin will be considered to have ceased production.

Since satoshi is the smallest unit of Bitcoin, after 33 rounds of halvings, the block reward that has been reduced to 1 Satoshi cannot be divided anymore; so at the block height of 6930000, the network will stop generating new coins. The total amount will reach 20999999.97690000.

Blocks that have not claimed a full reward (picture from coinmetrics.substack.com)

Of course, this is only a theoretical value. If some miners deliberately receive less bitcoin lost in block rewards, the final total may have to be reduced.

According to the Bitcoin agreement, miners in a valid block can receive the mining remuneration specified in the agreement and the transaction costs included in the block; however, during each full node inspection, they will only pay attention to whether the miner has requested more than allowed The amount of bitcoin does not matter whether the BTC received by the miner is lower than its due amount. Theoretically, it is very irrational for miners to receive only part of the block reward. However, this has happened many times in history, especially around the block height of 162000. About 193 blocks have not applied for the full reward, and it is estimated that a total of 9.61884623 BTC will be lost (data from u / ZepCoin on Reddit Reply).

A reply from netnight midnightmagic on the Bitcointalk forum on June 8, 2011

Whether these miners are intentional or if we fail to claim the full block reward due to an error in the mining software is unknown; but midnightmagic must be intentional. The Bitcointalk user posted on the forum on June 8, 2011, stating that in order to pay tribute to Satoshi Nakamoto who had disappeared, he deliberately received less 1 satoshi block reward while digging block 124724; because "中Ben Satoshi is gone, and now 1 satoshi will be lost forever on the Bitcoin blockchain. "

Zhao Changpeng: KYC leaks are old news, but the saying is different.

Analysis: Of the 167 leading altcoins, only 6 have a higher return rate than Bitcoin in the past year.

SheKnows event preview: What will happen to the blockchain if the global economic crisis occurs?

Professor of Beijing University of Posts and Telecommunications: In blockchain technology, the real success should be the success of business model innovation

Researcher: The behavior of Bitcoin users will gradually shift from acquisition to protection of cryptocurrency researchers