The Cosmos Network is an ecosystem focused on the scalability and availability of blockchain solutions. Its core products are the Tendermint Consensus, the Cosmos SDK and Interblockchain Communication (IBC), which are designed to achieve "blockchain internet." Cosmos uses the Bonded Proof-of-Stake mechanism to allow interblockchain transactions to occur using the "Hub-and-Zone" model.

Tendermint Core: The Tendermint core is a ready-to-use blockchain engine with a practical Byzantine fault-tolerant consensus protocol of the same name. This core can be used to build public and private blockchains. The consensus mechanism provides immediate end-of-life and security, prioritizing security rather than activity.

Cosmos SDK: The Cosmos SDK is a toolkit that speeds up the build process for developers who want to create their own blockchain for their own applications. Interblockchain communication: Provide developers with more tools to build their own blockchain. The next component of the Cosmos project is to improve the interoperability of different chains so that transactions can be chained and layered. With regional combinations, you can trade freely across the IBC compatible chain in the encryption ecosystem. 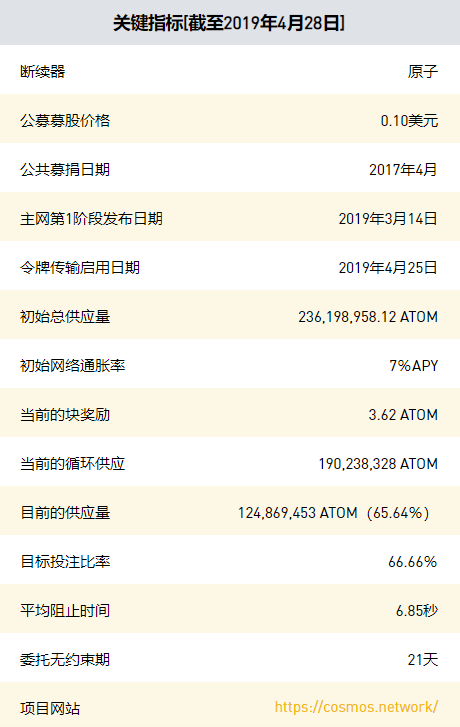 ATOM is the basic unit of Cosmos Hub and can be further subdivided into 1 million micro ATOM (uATOM).

What is the mission of Cosmos?

The Cosmos project aims to create an entire ecosystem around the blockchain run through the Tendermint BFT Consensus, making the blockchain easier to use, from providing the developer SDK to inter-chain communication (IBC) through the "Hub-and-Zone" model. The Cosmos backbone will be the first hub, and other blockchains and tokens can transmit information through the IBC. 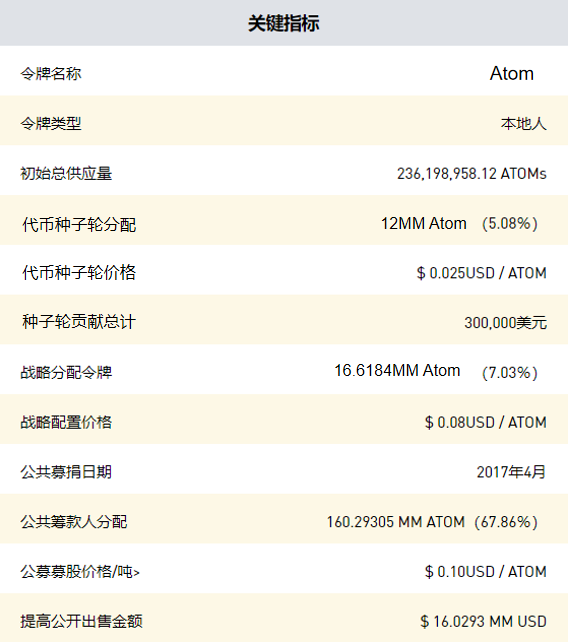 The public fundraising activity was carried out in April 2017 with a total value of approximately US$16 million in ETH, approximately US$0.10 per ATOM, accounting for 67.86% of the total token supply. 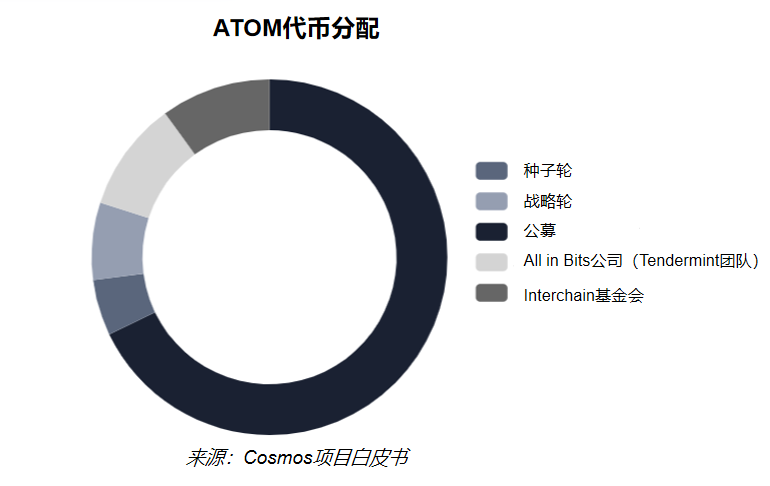 Token and funds use

The tokens held by All in Bits are dedicated to Tendermint's ongoing support, the construction of tools such as Cosmos-SDK, and the development of basic technologies for ecosystems. Tokens given to team members are non-transferable within 12 months, but can be used for commissioning and governance. The rest of the tokens held by All in Bits will be released monthly for 22 months after the release of the main network for 2 months (May 2019). The All in Bits team uses a multi-signature wallet to save the team's ATOM token assignment. The Interchain Foundation is a non-profit entity that encourages and supports open and decentralized networks, and therefore funds projects such as the sponsorship of the Game of Stakes testnet in Cosmos.

Token overview and use cases

In the POS certification system, ATOM can be regarded as a work token, and the user can put their ATOM together or delegate their ATOM to other validators participating in the verification.

Based on the delegate token share of a given verifier, each validator will have a certain percentage of "voting share", which translates into a new opportunity to package the new block and obtain the accompanying block reward, as in the POW consensus. Use the hash ratio to determine the relative probability of the next block.

The validator that gets the new block passes the block reward (minus the network tax of the spare pool) back to the principal, and the token binding of the principal helps to increase the total voter share of the verifier. As with pools in a PoW network, the certifier charges a fee for the work of summarizing the voting shares. The network tax will be used for the reserve pool and can be used to increase the security around the Cosmos Network.

As of the current writing time, the median commission fee for the active verification set is 10%.

The verifier not only has to compete for the cost, but also competes for uptime. At the beginning, only 100 validators were available at the start of the first year of the main network (which increased to 300 in the next 10 years), so a validator with high uptime was chosen as the generation verifier. To stay active, they must maintain a long uptime or they may lose their delegate token and certifier identity.

The network inflation rate is limited, with a minimum of 7% and a maximum of 20%, which is constantly changing; this change adjusts the block rewards to achieve a target network participation rate of 2/3 (66.66%). All Staking-trusted tokens take 21 days to “unlock”, so this part of the token cannot be sold immediately after Staking's commission.

ATOM is also used for chain governance, for example, token holders recently voted for a proposal to enable token transfer.

The project will also release or airdrop a secondary token, Photon, for transaction costs. At present, this token has not yet been finalized. In the long run, the activation of Photon tokens and the details of token usage will be determined by chain management.

Cosmos's milestones, whether coming or completed, can be found on the official website.

As of this writing, Cosmos's next milestone is to recommend support for IBC and to fully transfer governance to the entire Cosmos token holder community.

The original roadmap for the project from the beginning of 2017 can be viewed here. (Note: need to connect to the external network)

According to the disclaimer on the Cosmos website, “The development of the Cosmos project is mainly carried out by Tendermint”, which is a private group, but the development funds come from the Swiss non-profit organization Interchain Foundation. The full Tendermint team profile and personal background can be found on the Tendermint website.

Cosmos has several public code libraries, including open source SDKs, migration files from the testnet testnet to the mainnet mainnet. Since Cosmos runs on Tendermint, the Tithmint Consensus Github repository is included in the list of repositories below. (Data as of April 28, 2019)

1.Tendermint, the GO implementation of the Tendermint core (BFT Consensus), a total of 133 contributors, 7,214 submissions.

2. Cosmos-SDK, the SDK framework for building blockchain applications in the GO language, with 83 contributors and 5,392 submissions.

3. sdk-application-tutorial, a tutorial for building modules for the Cosmos SDK, with 19 contributors and 134 submissions.

4. Ethermint, using Cosmos-SDK to integrate Ethereum on Tendermint, a total of 5 contributors, 198 submissions.

5. Interchain Standards, a development library for cross-chain standards, with 4 contributors and 19 submissions.

Several projects have been established in the ecosystem of Cosmos and Tendermint. For example, projects such as Binance Dex, FOAM and Sentinel run on the Tendermint-driven blockchain. Other projects, such as the IRIS Network, have established services and support around the Cosmos system to make it easier to adopt in specific target areas. Click here to see a full list of the current 84 projects based on Cosmos. (Note: need to connect to the external network)

Cosmos' Inter-Chain Communication (IBC) needs to bind a certain amount of ATOM, then relay the evidence of the ATOM binding to the second chain, and then verify the evidence before releasing the corresponding token amount on the second chain. This makes it easier to create and publish tokens on other chains. IBC is compatible with fast-finality chains, which are blockchains with instant or near-instantaneous confirmation time, which complete transactions in a short time; however, with the help of “Peg Zones”, Using a POW chain without fast acknowledgment in the IBC, impose a “final threshold” on some blocks to assume that the transaction is actually final, similar to the recipient (such as an exchange) requiring the bitcoin deposit to receive a certain amount of confirmation To reduce "double flowers" or other attacks. This "pseudo-terminator" is transmitted back to the Cosmos ecosystem through this threshold using the peg area.

Although Ethereum's first peg area began in 2018, some projects based on Ethereum (such as Loom) have been announced to be compatible with Cosmos Hub.

The focus of the Cosmos community is on creating tools for developers to use their SDK. The team encourages local communities to provide local support in Asia, especially in the Chinese and Korean communities. The Tendermint team is primarily based in Berkeley, California and is also active in the San Francisco blockchain community. The Swiss-based Interchain Foundation also offers a unique approach to working with other blockchain projects to adopt/adapt to IBC standards. In summary, the common goal of teams, foundations, and communities is to increase blockchain interoperability and enable more dApps to work in a more cohesive blockchain ecosystem.

If reproduced, please indicate the source!

The most legendary bitcoin mining machine: once the moon landing hero, it takes 1 billion times the time of the universe to dig a block 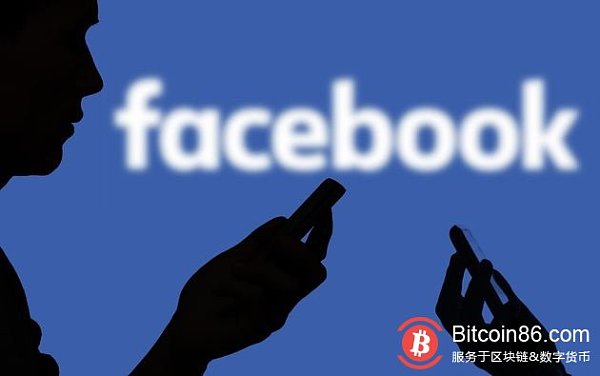