This article is the periodic work report of the "Key Steward" research group.

I. Asymmetric cryptography is the cornerstone of building blockchain applications

In the blockchain system, asymmetric cryptography is used not only for user identification and verification of operation rights, but also for digital asset address generation, asset ownership identification, and digital asset circulation. As shown in Figure 1, specifically, digital signatures based on asymmetric cryptography can construct public and private key pairs to identify users; can generate encrypted asset addresses based on public keys, and verify asset ownership with public and private key pairs; private key pairs can Operation signature, using the public key to verify the user's operation authority; you can also use the receiver's public key to encrypt the transmission data, and the receiver can use the private key to decrypt and read the data. 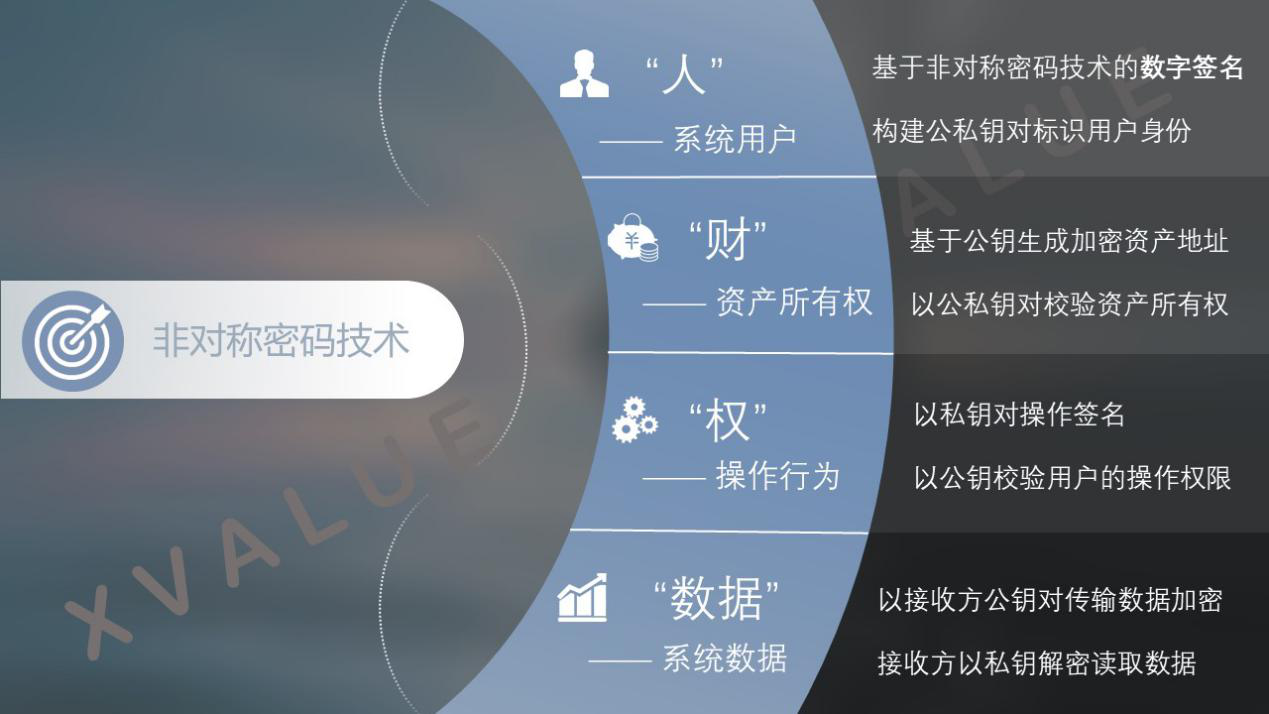 Figure 1 Application of asymmetric cryptography in a blockchain system

Distributed and decentralized trust are important characteristics of the blockchain system. These characteristics ensure that the blockchain system can reduce the threshold of trust and achieve higher system efficiency in the environment of multiple parties. However, the design and implementation of asymmetric cryptography itself is centralized, and it cannot effectively support distributed and decentralized systems.

At present, the asymmetric cryptographic algorithms used in blockchain systems use centralized algorithms for the calculation of private keys to public keys. The generation of public and private key pairs needs to be based on the complete private key, that is, between the private key and the public key. The relationship is 1 to 1, and the N to 1 relationship cannot be effectively realized. Therefore, asymmetric cryptography cannot effectively support the business collaboration of the same transaction under the participation of multiple parties, and it cannot implement native distributed management of "people", "finance", "rights" and "data" in the blockchain.

At present, distributed management of asset ownership, effective locking and custody of assets are basically implemented based on multi-signature and smart contract programming in the application layer at Level 2. Approval of operation permissions also need to be implemented through contracts. But these two methods are not supported by all blockchains, or have limited support capabilities. For example, BTC does not support smart contracts, and it only supports a maximum of 5 multi-signatures and a threshold of 3/5 on multi-signature; while ETH does not support multi-signature, it is necessary to write smart contracts to achieve similar functions. On the other hand, from the perspective of security, in addition to the implementation of the functions completed at the upper layer, in addition to considering the completeness of its own business logic, it is also necessary to consider attacks from the bottom of the system. .

If we transform the centralized asymmetric cryptographic algorithm into a distributed asymmetric cryptographic algorithm, which is referred to as the distributed key technology in this article, as shown in Figure 2, the existing private key generated by a user is transformed into a multi-key Each node independently generates its own private key shards, transforms the existing centralized computing process into a distributed computing process, and transforms the correspondence between a private key and a public key into a set of private key sets and a public key Key correspondence, then the original public key generation, signature, verification, and data encryption processes based on a single private key can be transformed to complete public key generation, signature, verification, and data decryption based on a set of private keys Process, asset custody, approval, etc. were originally located at Level 2, the business completed by the smart contract can be achieved by calling the underlying distributed key components located at Level 1, and the function of such distributed key components is atomic , Has the same password security strength. 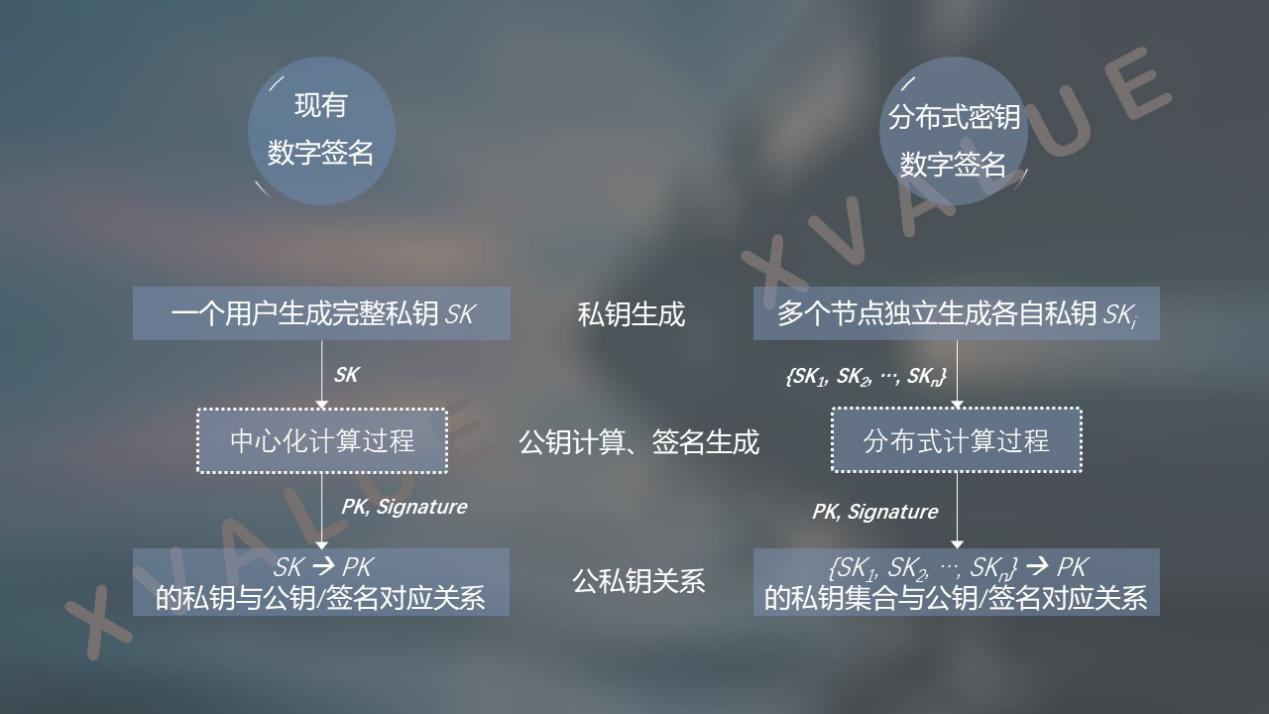 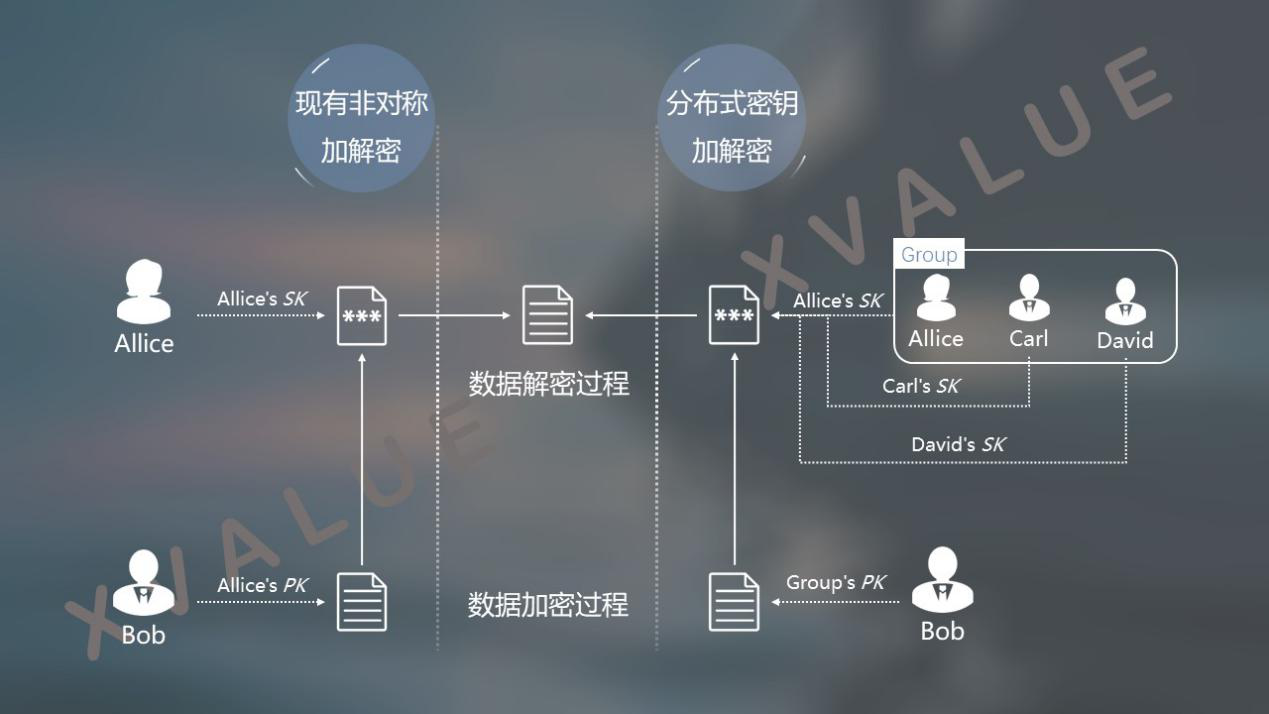 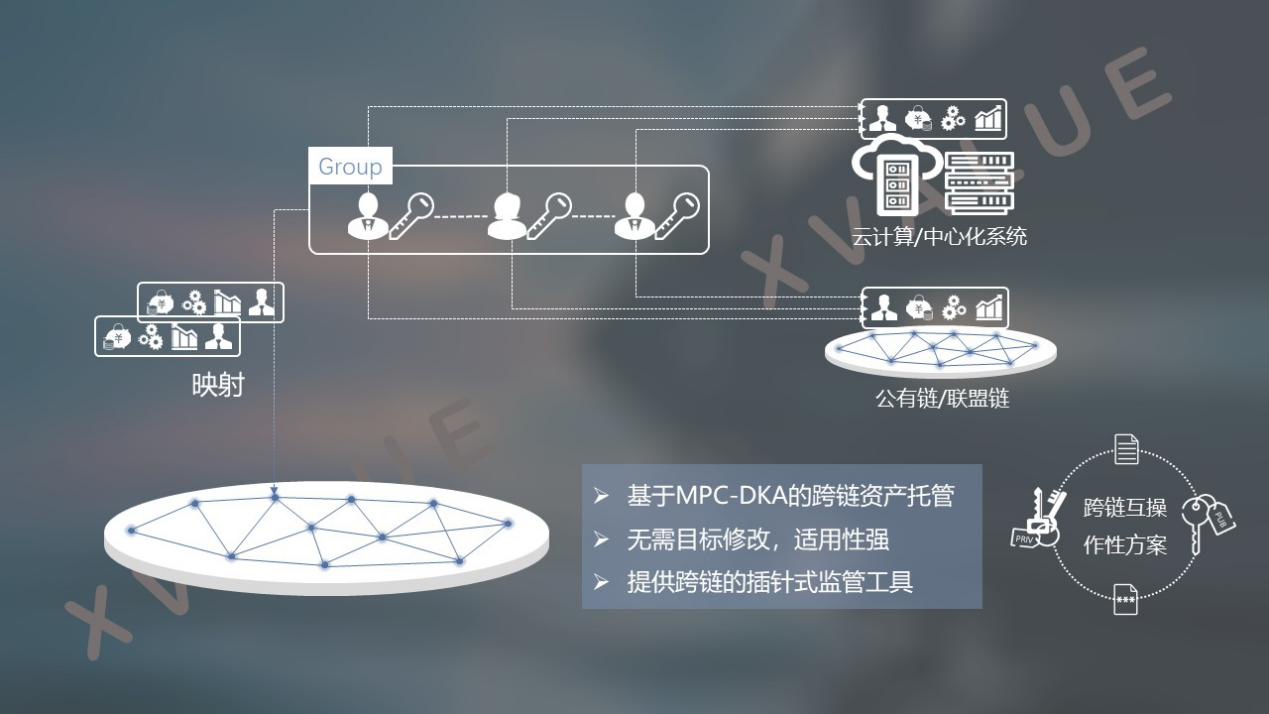 Based on the distributed key technology and the cross-chain interoperability scheme, remote management of "people", "finance", "rights" and "data" from different blockchain systems or traditional information systems can also be realized As shown in Figure 4, a cross-chain scheme based on a distributed key algorithm is constructed.

Fourth, the distributed implementation of asymmetric cryptography is a substantial breakthrough in promoting blockchain technology and application governance

In existing blockchain systems and information systems, the private key is the user's passport in the system, and no one can influence its behavior even under abnormal conditions. In this case, we can only rely on KYC, rely on the analysis of the data to find anomalies, and rely on the after-the-fact disposal of the abnormal situation. 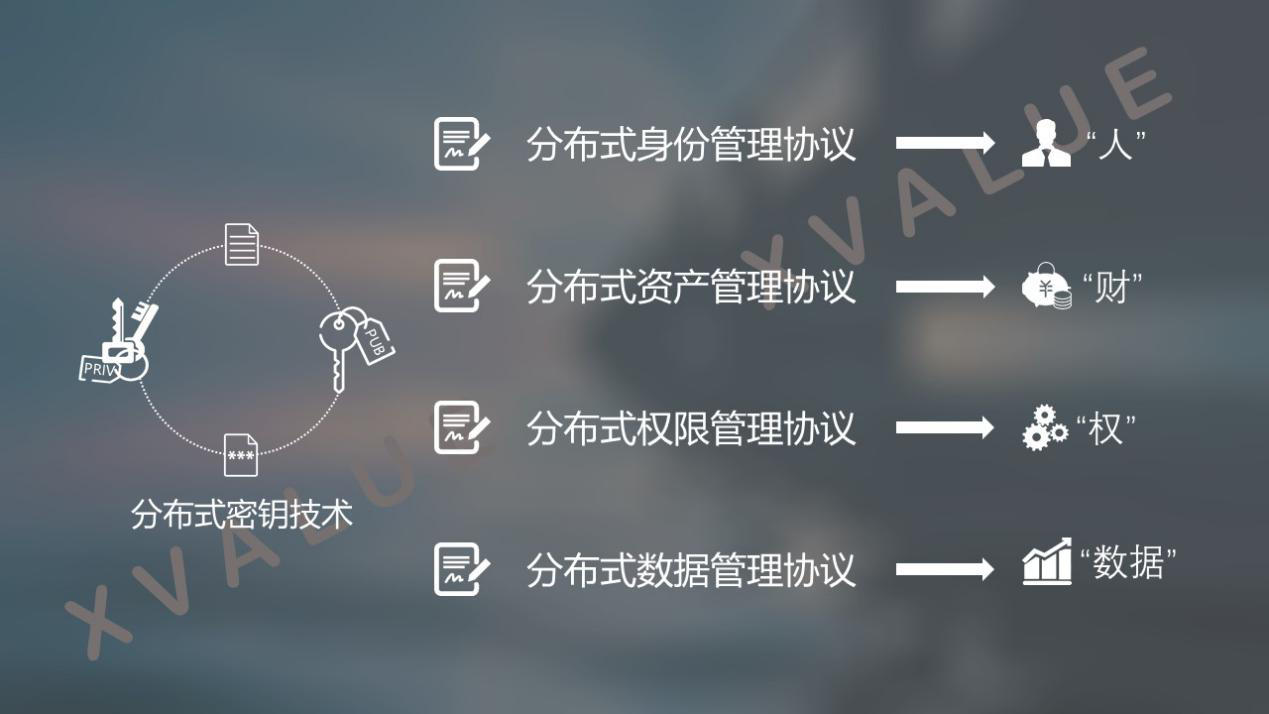 Therefore, the distributed implementation of asymmetric cryptographic technology is a necessary technical foundation to promote the substantial combination of blockchain technology and application governance, and to promote the development and promotion of the blockchain industry.

There are several ways for users to implement a binding relationship with a distributed private key collection.

Its advantage is that the distributed private key set corresponding to the escrow identity completely exists in the distributed system, and users do not need to care about its security. At the same time, in the use process, as long as the user initiates an operation request, the distributed system completes subsequent operations after accepting the request, and does not require the user's full participation.

Another implementation is that one or more private keys in the distributed private key set are held by the user. In this way, the user is both the principal and the trustee of identity hosting. The binding relationship between a user and a hosted identity is guaranteed by a cryptographic algorithm, which is a mathematically provable binding relationship.

The advantage of this solution is that it provides higher security for identity hosting. But in the use of signatures, users need to participate in the whole process.

Certain behaviors of users in application systems need to implement privacy protection. User identity hosting can provide a reliable privacy identity for users in the real world. Through the distributed key system, a decentralized distributed user identity hosting platform can be established. The distributed algorithms and decentralized features ensure that no entity third party can obtain the real world corresponding to the identity of the trusted user. Real user information.

At the same time, in the current real world, the government has clear regulatory requirements for some industries and some specific applications, such as finance, import and export, and customs. Supervision lies in being able to understand the macro data, make timely adjustments or, in special circumstances, have effective means of review to locate the source of the problem. This puts forward the requirement of layered management between privacy and supervision, that is, in daily use, users' behavior in the system should be protected by privacy, while being able to provide supervisory and auditing capabilities in a small range .

In an application system with a supervisory function, as shown in Figure 8, before generating an identity hosting system account, users can access the corresponding KYC system and complete the required identity authentication in accordance with the requirements of local laws and regulations. These KYC data will not appear in the identity hosting system or application system, so as to ensure its privacy behavior in the application system. At the same time, these data are encrypted and stored in KYC and authorized to access to specific parts, so as to meet the needs of supervision and audit. .

The basic logical relationships include:

(3) Specify the "and or" relationship of a distributed private key

(5) "AND" relationship between distributed private keys constructed by thresholds

Figure 11 When the number of private key shards and the number of business participants are 1: 1, a “YES or” relationship with a threshold is formed and a “YES” conclusion is formed

Figure 12 When the number of private key shards and the number of business participants is 1: 1, a "NO" conclusion is formed when there is a threshold "AND" relationship.

(6) Specify the "and or" relationship of a distributed private key

Figure 14 Specify an AND relationship of a distributed private key

Evaluating the system's operating status through historical record data, checking whether the business application complies with the specifications, discovering whether there are any abnormal operations and prompting related risks, is a post-hoc monitoring and post-correction method. For core and key business applications, business supervisors need to be empowered with prior approval.

The traditional method is to implement the approval operation of a business request with different permissions through the service flow, but it has the following disadvantages:

(1) The approval method of business circulation depends on the accuracy of the code's implementation of business logic, and there is a possibility of logic loopholes;

(2) The approval method of business circulation cannot form a valid voucher for the decision-making process. The approval process and the instructions submitted in the final system do not constitute a strict correlation, and cannot form a logical relationship that can be traced and cannot be tampered with.

The specific process is as follows:

(2) For operations submitted by the executor, if the supervisor needs approval, the supervisor will complete a valid signature on the operation instruction in a distributed manner, and the signature can be verified by a third party using the traditional public key method;

At the same time, both the regulated object and the on-chain assets may participate in the business applications of third-party blockchain systems. As a result, distributed key technology can be used to implement distributed control of user identities, account addresses, and operating instructions in other blockchain systems for supervised objects and on-chain assets. The pin-type supervision of the chain system provides real-time approval capabilities for users, assets, and operations in third-party systems.

For abnormal situations discovered after the audit, such as the illegal operation of some supervised objects and the takeover of related account assets, it is necessary to give supervisors an abnormal handling capability that does not require the supervised object to participate .

By adopting the threshold threshold setting through distributed key technology, supervisors can be given private key fragments that reach the threshold setting, thereby achieving emergency processing capabilities for specific assets under special circumstances . As shown in Figure 17, in this process, the supervisor can use the private key shards that reach the threshold when needed to complete the transfer of assets in a specific supervisory account, thereby locking related assets and avoiding continued violation operations. .

Anti-virus, how to win a…

Gu Yanxi: Migration from a…

Lakara: Signed an agreement with Guangzhou Financial Bureau to build a regulatory blockchain and digital supervision service platform for the small loan industry