Source of this article: Odaily Planet Daily , original title "In the lifetime, was it pitted by FCoin?" 》 FCoin, which once stirred the situation of the exchange with its own strength, ended eventually.

On the evening of February 17, the seventh day after the FCoin outage maintenance incident occurred, Zhang Jian, the founder of FCoin, released an announcement to unveil the "truth of the shutdown" of FCoin.

Zhang Jian mentioned in the announcement that he is facing the problem that the capital reserve cannot be cashed out by users, and it is expected that the scale of cashing out will be between 7000-13000 BTC (valued at about 68.6 million-127 million US dollars). Zhang Jian mentioned that he had decided to switch tracks and start again, and used the profits of the new project to compensate everyone for their losses.

One week ago (February 10), the FCoin Exchange temporarily announced an emergency shutdown maintenance announcement. In the following days, the suspension time was repeatedly extended, and the official team lost contact. Since then, Zhang Jian has provided a plan to withdraw coins by mail, and very few users have successfully withdrawn coins.

After the FCoin truth announcement, FCoin released the announcement change mail withdrawal process again, saying that the receipt of the verification code does not mean that the user can successfully withdraw, and must check the mailbox + assets before processing the relevant withdrawal request at the actual amount.

That night, after the blockchain data platform Chain.info tracked the asset flow of the Bitcoin wallet address that FCoin had disclosed, it was found that almost all funds in the address (about 9,900 BTC) subsequently flowed into other mainstream exchanges. Among them, the last large transfer occurred on January 30 this year, and 100 BTC flowed into the Binance recharge wallet address.

Was this New Year's Eve drama "helpless bankruptcy" or "premeditated"?

At the end of the FCoin Truth Announcement, Zhang Jian left eight big words of "lifetime, responsible to the end", but hardly anyone paid for this 3,000-word "small composition".

"I charged tens of thousands of USDT and 0.1 bitcoin from Huobi. The mine was not mined, and I bought 200 USDT of EOS during that period. Is it gone?"

There are numerous such messages in various rights groups. Individual investors have lost funds due to FCoin thunderstorms, ranging from a few hundred to thousands, and as many as 6 digits or more. Among those defenders whose funds have been locked, not only are old FCoin users, but also some new retail customers who have been on the bus because of the "700 million destruction". 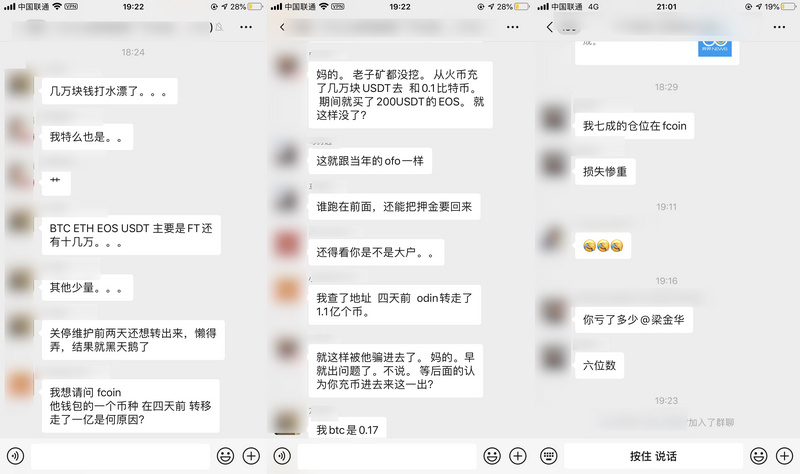 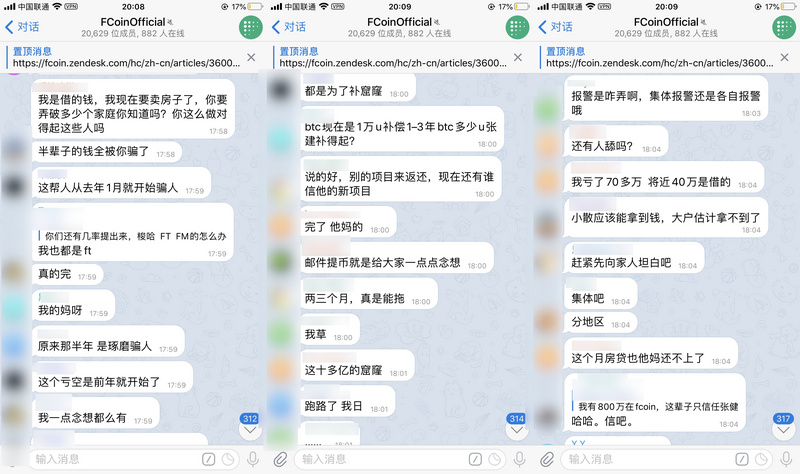 And shortly after Zhang Jian's announcement, a lawyer's interpretation was reproduced in various FCoin rights groups. In the screenshot, the lawyer explained that Zhang Jian had thought that he was going to run, and that he could scam the case after running. As a result, he acknowledged all the claims and successfully converted a criminal case into a civil case. do not know.

In response to Zhang Jian ’s statement that he can evade fraud and criminal liability, Odaily Planet Daily interviewed Lawyer Guo Yatao, a lawyer from the chain law team, to get a professional answer:

Strictly speaking, the above statement is not accurate.

First, there is a contractual relationship between users and Fcoin. Fcoin provides users with services related to digital currency transactions. If Fcoin is insolvent and there is a redemption crisis, on the one hand, investors who have coins in Fcoin will become their creditors, and Fcoin and Zhang Jian are debtors.

Secondly, the establishment of the crime of fraud requires the intention of fraud, the purpose of illegally possessing funds, the use of fictional facts or the method of concealing the truth. If FCoin and Zhang Jian were originally intended to defraud everyone of their coins, they are suspected of constituting fraud. crime;

Attorney Guo Yatao further interpreted that Zhang Jian currently issued an announcement indicating that he acknowledged investors' claims on them, that is, he recognized these debts. In this case, from the current disclosure , this incident is a civil dispute and does not involve criminal aspects.

"At present, who exactly this debt is also related to the nature of the company. If FCoin exists from the beginning to the end as a community and team, there is no company entity, then who is ultimately responsible for the loss of funds, then Who will bear these debts. What investors can do now is to unite as creditors and communicate with Zhang Jian as soon as possible to understand the situation and find a solution. "Guo Yatao said.

Large households, investors, and community members are unable to contact Zhang Jian, and the problem of cashing funds has already begun.

In fact, FCoin started its community-based operation as early as 2019. Today, how the huge amount of funds is gone, and the reasons behind the huge amount of shortfalls have not been disclosed in detail. To further verify the truth, we have to understand the real situation through Zhang Jian.

But Zhang Jian disappeared in the center of the boiling event, just as he did a few days ago.

The layout master admits that he has never worried about the platform's funding problem: "The platform's profitability last year is still very considerable, and the dividend from June 2018 to June 2019 was close to 100,000 BTC."

The layout master said that in order to safeguard their rights, the large households were fragmented and played their respective roles, and various small groups began to appear to seek their own interests.

There is also no contact with Zhang Jian, and there are early investors in FCoin, but they have seen the difficult reality of FCoin funds cashing out before the big ones.

Regarding FCoin's announcement that it could not be honored, Odaily Star Daily interviewed early-stage private equity institutions that invested in FCoin in 2018.

A private equity investor stated that only a small percentage of coins were received after FT was listed on the exchange. Most of the coins were locked on the platform, restricting withdrawals and movements. Later, the financial management of BTC and USDT also disappeared. , And has been unable to contact Zhang Jian.

In response to this claim, a core member of the community confirmed to Odaily Daily that this had indeed happened, but at the time it was considered to be an isolated incident.

FCoin thunderstorm or trigger domino in the currency circle

The collapse of FCoin is triggering the "domino effect" of the currency circle.

After the FCoin thunderstorm, Yubibao Fund of the ExinOne team first issued an announcement saying that due to the existence of some digital assets in FCoin wealth management accounts, Yubibao will temporarily suspend deposit and withdrawal. Also affected by the thunderstorm are many quantitative teams and borrowing arbitrage individuals.

"At present, there are three quantified funds that cannot be obtained." An industry insider described that the impact of the FCoin crash is bringing a chain reaction and affecting the currency circle.

Affected by the failure of FCoin to fulfill the crash, some quantification teams did have an impact.

Crypto analyst Tong Dong analyzed that FCoin's spot transaction rate is very friendly to the quantization team, and its default rate is even half cheaper than OK for a period of time.

According to Dongdong's analysis, common “quantity-protected and interest-guaranteed” (principal protection for investors in the payment), “low-risk non-guaranteed” (providing a certain percentage of insurance services) and “high-risk non-guaranteed” (platform The problem is that no compensation is paid to the client. The fund management fee is cheaper than the second one. Generally speaking, most people who invest in quantitative funds will choose the first one and the third one. And even this money, even from the mortgage loan, is very loss.

At the same time, the credibility of the centralized exchange has also been greatly questioned. Some voices said that the currency in the "unreliable small exchanges" should be taken away as soon as possible to prevent similar things from happening and fear of run-in.

The "original sin" of centralized exchanges: Is the reserve system realistic?

In this way, choosing an exchange is like a gamble. Doesn't a centralized exchange have the best solution? Perhaps the reserve system is a viable option in the short term.

The method of 100% reserve certification is to help users tie the hands and feet of the exchange.

However, as the current regulations on digital currency exchanges are still relatively vague, the current exchange reserve system can only rely on the exchanges' consciousness. When people are more and more concerned about the security of asset transactions, a sound reserve system is likely to become the vane of competition for centralized exchanges in the second half.

In addition, when darkness comes, the value of platform coins is often falsified first.

FCoin thunderstorms. Those who once toasted "FT 100, villas by the sea" woke up from their dreams and became the biggest victims of the FCoin incident today.

After this storm, the value of the platform coin, the supervision and security of the centralized exchange, are worth re-examining the players who remain on the field.

Smart Agriculture 5G test base Chengyang starts, will use blockchain and other technologies to help the development of smart agriculture