Recently, the Ministry of Agriculture and Rural Affairs has issued two working documents, one of which mentions blockchain technology.

Earlier, the pulse of the interchain has observed that in 2020, the central document No. 1 is still focused on the "agriculture, rural areas, and farmers" area. The difference is that this document ranks the blockchain before artificial intelligence and 5G. Further policy of the industry is overweight. The two documents issued recently by the Ministry of Agriculture and Rural Affairs are the implementation of the No. 1 document of the Central Committee. The documents also make further plans for the use of blockchain technology, and clearly propose the application scenarios of the blockchain.

On February 13, the Ministry of Agriculture and Rural Affairs issued and issued the “Key Points for the Quality and Safety of Agricultural Products in 2020”. The “Key Points” mentioned that in 2020, smart supervision should be vigorously promoted, and a smart agricultural security platform should be planned, using big data, Internet of Things, Modern information technology, such as blockchain, promotes innovation in supervision methods, and promotes the transition from traditional "man-to-man" supervision to online smart supervision.

This was further planned and implemented by the Ministry of Agriculture and Rural Affairs on February 5, after the official publication of Central Document No. 1 in 2020. "Accelerating the application of modern information technologies such as blockchain in the agricultural sector" proposed by the Central Document No. 1 has been more effectively reflected in these two documents. "The Essentials of Pesticide Management in 2020" puts forward the application scenarios of blockchain in traceability of pesticide quality; "The Essentials of Agricultural Product Quality and Safety in 2020" put forward the scenario of agricultural product quality and safety supervision. The document further promotes the integration of blockchain and agriculture from different perspectives.

In fact, before the No. 1 document of the Central Government, there were already documents that promoted "blockchain + agriculture". 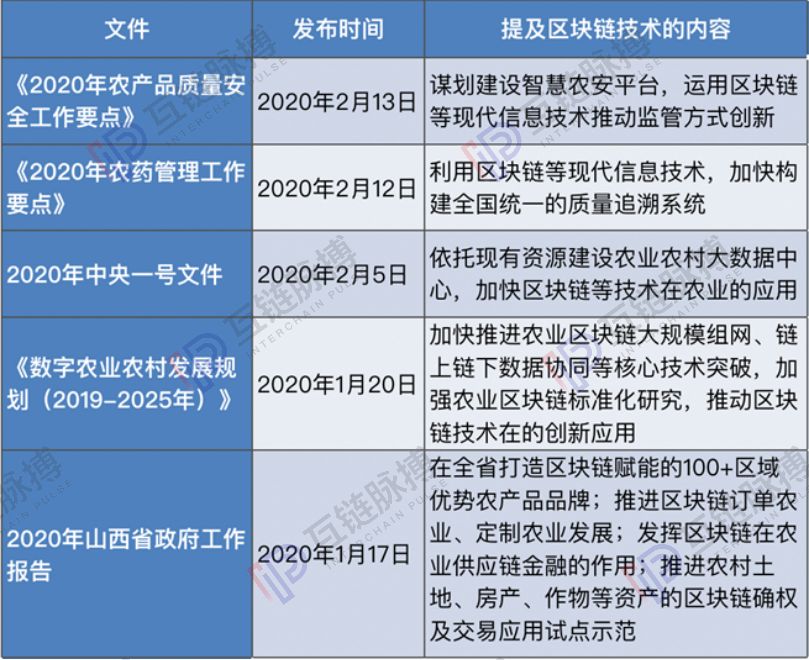 On January 20 this year, the Ministry of Agriculture and Rural Affairs and the Office of the Central Cyber ​​Security and Informatization Commission issued the Digital Agriculture and Rural Development Plan (2019-2025). Among them, accelerate the advancement of core technological breakthroughs in large-scale agricultural blockchain networking, on-chain and off-chain data collaboration, strengthen the standardization of agricultural blockchain research, and promote blockchain technology in agricultural resource monitoring, quality and safety traceability, rural areas Innovative applications in financial insurance, transparent supply chain, etc.

On December 25 last year, the Leading Group of Cyber ​​Security and Informatization of the Ministry of Agriculture and Rural Affairs convened a plenary meeting, which also mentioned the use of blockchain technology to promote the construction of digital agriculture, promote agricultural modernization with informatization, and 2020 Like the No. 1 central document, blockchain technology is listed before artificial intelligence and 5G.

Observing the above documents from the pulse of the mutual chain, the main combination of the proposed "blockchain + agriculture" lies in the traceability of quality and safety in the agricultural field and the financial supply chain of agriculture.

Giants at home and abroad are exploring "blockchain + agriculture"

In response to the policy documents, the application of "blockchain + agriculture" in China is also centered on the traceability of agricultural products. Mutual Chain Pulse counts the recent domestic blockchain applications in the agricultural sector. From December 2019 to the present, a total of 4 applications have been launched, of which 2 were launched by Internet giants Ali and Jingdong.

On January 7 this year, the smart vegetable farm project in Yinzhou District, Ningbo City, Zhejiang Province, which was jointly constructed by Ali, Citydo Group, and City Bank of Yinzhou, was officially launched. The project has realized cross-platform integration of systems such as visual information display of smart farmer systems, smart hardware, food traceability, online operations, and blockchain certificate storage. It is reported that the smart vegetable farm will be further improved in the future. It will use artificial intelligence, blockchain and other latest technologies to transform from manual supervision to digital supervision to realize smart supervision such as field appearance, license management, and food traceability.

The future application scenario proposed by the "Yinzhou District Smart Vegetable Farm" is exactly the same as "The use of modern information technology such as blockchain to promote the innovation of supervision methods and the traditional person-to-man The transition from supervision to online smart supervision is consistent. It can be seen that before the application of agricultural blockchain in China, there have been certain market seers and prophets before policy guidance, and corresponding exploration has begun.

These two applications are also aimed at the traceability of agricultural products, that is, the "innovative application of blockchain technology in quality and safety traceability" proposed in the "Planning" issued by the Ministry of Agriculture and Rural Affairs on January 20 this year.

It can be seen that not only the traceability of agriculture, but also the blockchain technology has further promoted the development of precision poverty alleviation fields related to agriculture.

In addition, the mutual chain pulse is concerned that foreign governments and enterprises, and even the United Nations are exploring the combination of blockchain and agriculture.

Prior to January 24, Covantis, a blockchain initiative project supported by Cargill and other global agricultural giants, selected ConsenSys as a technology partner, and ConsenSys will establish an Ethereum-based blockchain platform for international agricultural integrated enterprises. Supply chain brings efficiency and cost savings; On January 21, AB InBev, the parent company of beer brand Budweiser, adopted a blockchain-based solution to assist African farmers in providing evidence of their income.

News from January 11th, promoted by the United Nations Development Programme, and launched a blockchain cashmere application in conjunction with Toronto startup Convergence.tech. The company has completed a blockchain application trial that can help Mongolian nomads track and certify sustainable Cashmere.

It can be seen from the above applications that there are many domestic and foreign "giants" in the "blockchain + agriculture" application scenario. Based on the "giant" support, strong technical support from the blockchain, and policy support, I believe that the blockchain will definitely promote the digital transformation and upgrading of China's agriculture at this "decisive" moment in 2020.

How does blockchain bring new…