In mid-February, while people in the digital asset community were still hotly discussing where the price of bitcoin would go in the aftermath of a million, an announcement caught everyone's attention.

On the evening of February 12, FCoin issued a further announcement on the latest progress of system maintenance and the opening of withdrawal applications. The announcement denied the hacking of FCoin, saying that due to the loss of key personnel and severe damage to some systems and data, it could not be restored in a timely manner as planned, and the operation of applying for withdrawal by mail was opened. At this point, the topic of "FCoin running" has caused heated debate and speculation. Investors have also panicked. Some people even use our ChainsMap system platform to analyze the path of FCoin's on-chain asset transfer to speculate whether it is really "running."

Finally, on February 17, Zhang Jian, the founder of FCoin, responded positively, revealing the "truth." He recalled in the announcement that the cause of the unpayable event was data errors, decision errors, and a series of intermediate operations. In the end, the problems accumulated over time, the capital holes were getting bigger and bigger, and the risks were getting bigger and bigger. In the end, its cash reserves are no longer sufficient to meet users' demand for withdrawals. It is expected that the scale of non-payment can be between 7000-13000 BTC. Obviously, this is a huge fund hole.

Regarding FCoin, which used to be very beautiful, the trading volume was the fall of a phenomenon-level exchange that was the sum of several exchanges behind it. In the end, it was due to poor management or a planned "running road". We do not evaluate it. We Based on Beijing Chainan ChainsMap's data traceability system, let's take a look at the asset transfers in the last few days after FCoin's "incident" and the signs of this crisis that have previously appeared.

After FCoin communicated that internal key personnel lost contact with the outside world in the announcement and community, according to this logic, people have speculated that there might be an "infighting", that is, people with background permissions destroy the system, then what people care about next The question is whether this person has higher authority or even steals money? Just before and after Valentine's Day, the major hot wallets of the original FCoin in mainstream currencies have transferred to new addresses.

The ETH and related ERC20 tokens in the FCoin hot wallet are transferred to the address starting at 0x5a1b06.

FCoin's TRON coins and TRC20 tokens on the TRON chain were also transferred to the new address.

FCoin's wallet for EOS was also transferred to a new address.

But in the readme of the founder of FCoin since then:

In other words, the founder has control of the current new address. In this context, we can understand that the transfer of money completely transfers control to the founder's hands. The next question is, is the mail withdrawal really going on?

For investors, the most important issue is whether their assets can be taken back and how much they can get back. From the information disclosed by the founders, due to the huge gap, at least in the short term, most investors will not be able to get back their assets. So are there any "lucky people" who have successfully withdrawn coins?

Judging from the data on the chain, for some currencies, transactions with withdrawal characteristics do occur. Taking Ethereum as an example, the address beginning with 0x5a1b06 seems to play the role of a new cold wallet for FCoin, and the address beginning with 0x9b823e Transferred into Ethereum, this address then played the role of a withdrawal address, and transferred to some addresses, reflecting the characteristics of user withdrawals

Withdrawals of some ERC20 tokens including USDT are also taking place

However, the efficiency is really low. Basically there may be only a dozen or even a few. 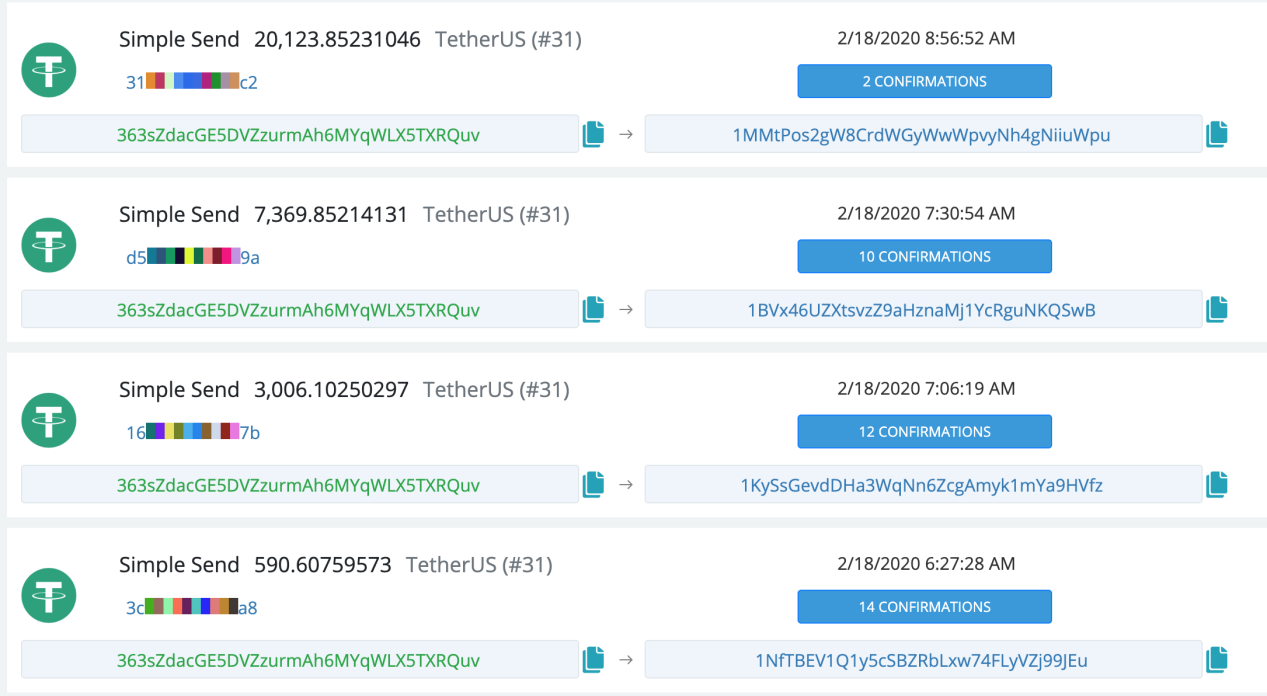 The same is true for OMNI USDT. The address of OMNI USDT that undertook the original FCoin will occasionally transfer to other addresses. Many address characteristics are indeed user recharge addresses of other exchanges.

However, once credibility collapses, reconstruction will be difficult. These operations have also been questioned by some investors as "self-directed and self-directed", not to mention so many people who apply for withdrawals, and why these people can get opportunities, it is not clear. It should be noted that the assets of the original FCoin transferred to the new address are not enough, and it is expected to be used up in the near future at the current pace. More investors still cannot obtain the assets deposited in FCoin in time.

So why did FCoin collapse suddenly, which seemed to come too suddenly? Before that, have there been any signs that we can see the emergence of some problems?

Back to 2018, the most brilliant era of FCoin, or the beginning of the crisis

In 2018, FCoin was born out of nowhere. The "transaction is mining" model has made it the most popular exchange for a time. The daily trading volume not only throws away Huobi, Okex, Binance and other exchanges, but also surpasses the latter. with. However, judging from the change in the total amount of bitcoin stored in the cold wallet 12rU7whLERNrkDb8bTe9VJJSKZvCXy7dj7, the crisis may have surfaced that year.

Through the ChainsMap monitoring system, we reproduced the change curve of the total amount of bitcoin in this cold wallet. It is clear that in the first half of 2018, it was indeed very hot. A large number of users recharged the exchange, and converged to the hot wallet and finally to this. Cold wallet collection. On July 22, 2018, the wallet ushered in a peak, with a total of 11,509 BTC, but since then it has shown a downward trend as a whole. After the first quarter of 2019, the bitcoin stock at this address is actually much less than the peak period. In its early 2000s, it was basically empty from September to October 2019, leaving only dozens of bitcoins.

Therefore, we can see that if there is a problem in operation, it may have appeared in the second half of 2018, which is also in line with the self-report of the founder of FCoin and the timeline of the FT price plummet.

So where did these coins go? Recently, it has been said that the bitcoin of cold wallet was directly mentioned in other exchanges, suggesting that it seems to be a long-planned large-scale asset transfer. This statement is actually not technically rigorous, because a slightly larger exchange will be a process where a user deposits coins, collects coins into a hot wallet, and then collects large amounts into a cold wallet for secure storage. Conversely, on the withdrawal of coins, it is also from the cold wallet to the hot wallet that functions as a coin, according to the recent amount of funds required, and then this hot wallet transfers to the corresponding address according to the user's withdrawal requirements. Of course, many of these addresses are Other exchange addresses, so it is not a special behavior for many exchanges to be transferred to mainstream exchanges on one exchange. You can also find that they exchange with each other when analyzing Huobi and Binance's coins, because the mainstream exchanges themselves gather a large number of user.

In fact, after FCoin went online, the users of early coin deposits came from Binance. Since then, a large number of users of Huobi and Okex have transferred assets to FCoin, which also reflects the huge attractiveness of FCoin's “transaction is mining” model and What's hot. After the FT price plummeted, a large amount of funds were turned into Bitcoin, USDT, etc., and it was logically normal for investors to transfer the currency back to the previous exchange.

From the point of view of the currency withdrawal behavior at the time, most of them were normal user withdrawals, so it was not ruled out that FCoin had already faced a large number of user withdrawals after the FT plunge at that time, combined with some other reasons, it caused its operational problems to begin to appear.

What is more noteworthy is that the remaining 2,000 or so Bitcoins in FCoin suddenly dropped sharply from September to October after there was almost no change in 2019.

Conclusion: Is your asset safe?

Centralization, opacity, lack of supervision, and being both athletes and referees are all the characteristics that today's centralized exchanges in the digital asset field are criticized. Unlike the mainstream financial field, assets are held by banks and transactions are provided by brokers. There are regulatory differences behind it. Centralized exchanges not only provide trading services, but also store assets. On-chain transactions, etc. are even more common for investors. Unfamiliar, in the eyes of most investors, seeing the bookkeeping number after logging in to the account seems to mean their ownership of the asset.

The story of FCoin once again tells us that in the field of digital asset trading, wealth management, and services, the assets of most investors are in a stage that is completely dependent on the trust of the relevant exchange brand. In addition, there is no transparent mechanism and supervision to ensure that relevant institutions are not Do evil.

On the one hand, we recommend that investors choose relatively large and well-respected institutions, especially those that have been regulated to engage in related businesses. We also recommend that if there is no need for transactions, financial management, etc. of personal assets, investors can transfer them to an independent wallet storage. At the same time, please also pay attention to the security of keys.

On the other hand, we also hope that leaders in the industry can come forward to establish corresponding self-regulatory standards and alliances, as well as introduce third-party supervision, and internally resist the offenders to force them to be eliminated.

Statistics: NYDFS has approved 18 BitLicense applications, and 8 have been issued this year IPA in Japan: Blockchain is expected to enter a stage of creating high added value