Original: Journal of Banking and Finance

Source of this article: Institute of Financial Technology of the People's Congress (id: ruc_fintech)

What is the investment potential of the blockchain? "Still Blockchain: How Does the Market react to companies involved in Blockchain? 》 (I am a blockchain too: How does the market respond to companies' interest in blockchain?) Uses a dataset of 713 companies from around the world for regression analysis, focusing on the market's response to companies that claim to be involved in Bitcoin, and this response Whether it is related to Bitcoin's market performance. The Institute of Financial Science and Technology of Renmin University of China (WeChat ID: ruc_fintech) compiled the core content of the article.

During the dot-com bubble, companies with ".com" in their company names averaged a 74-day cumulative excess return of 74%. The market's welcome to these companies reflects investors' positive sentiment towards technological innovation. Regarding the blockchain technology that has appeared in recent years, some people think that blockchain will be the next technological revolution, and some people think that blockchain is overvalued, which is more likely to be the next Internet bubble. With this in mind, we analyzed the market's response to companies that have announced their involvement in Bitcoin, and whether this response is related to Bitcoin's market performance. By searching for blockchain-related news headlines, we collected an international sample of 713 companies involved in blockchain technology. After calculating the logarithm of the return of each company (Ri, t = ln [Pi, t / Pi, t−1]), we use it to estimate the excess return (ARi, t = Ri, t− αi − βi ( Rm, t)) and cumulative excess return (CARi; T1, T2 = Σ ARi, t), and the following analysis was performed.

Descriptive statistics of the data 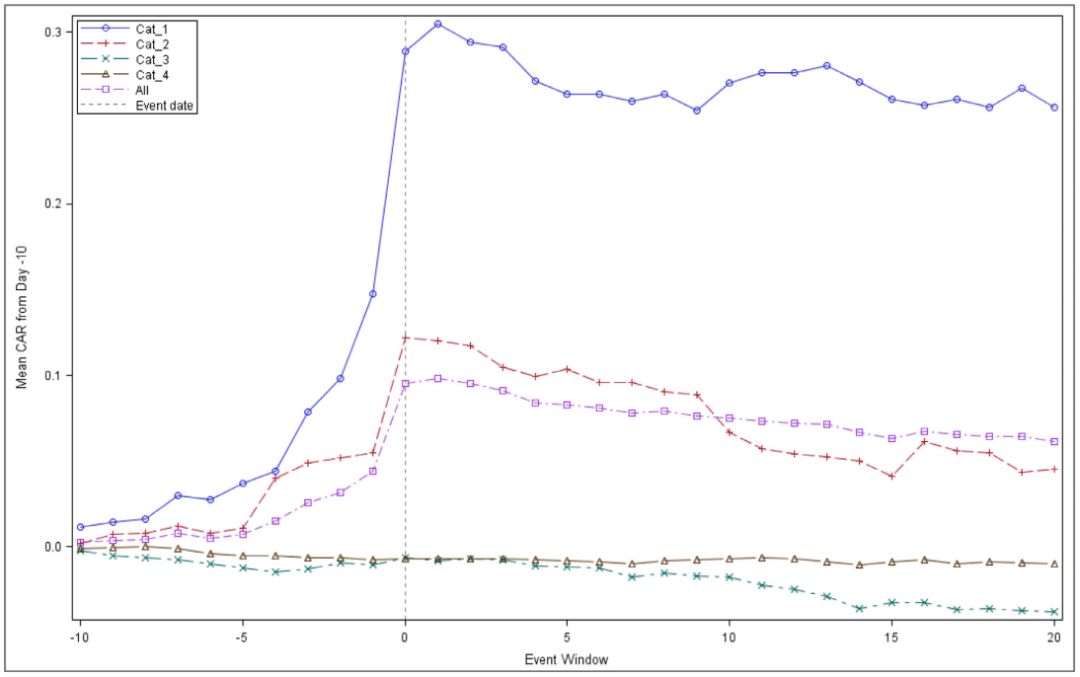 Relevance of blockchain companies and Bitcoin

We further analyze the relationship between blockchain-related announcements and Bitcoin price levels and returns. The following table shows the estimated amount of regression for the accumulated excess returns of blockchain-related companies 3 days, 11 days, and 41 days before the announcement date. We found that the Bitcoin price and cumulative gains over the past 30 days were significantly positive. This conclusion supports the assumption that when the bitcoin market performs better, the companies involved will generate higher excess returns . The significant negative correlation of company size further supports the assumption that small companies will respond more to the Bitcoin announcement. The 2017 variables are not significant, and the 2018 variables are significantly negative within two time windows, which is consistent with the expectation that the company's excess income will also decline as the price of Bitcoin declines in 2018.

Through regression analysis, we find that the company's size (market value) and the bitcoin price level during the announcement period play an important role in explaining the cumulative excess returns for each window period. So, if investing in all blockchain-related stocks before the blockchain appreciates, will it produce an excess return? To answer these questions, we constructed a series of equally weighted buy-and-hold portfolios and examined portfolio returns and Bitcoin returns based on the Fama-Franch five-factor model. The following table shows the time series regression results of the US portfolio by year under the framework of the Fama Francis five-factor model. In the first column, the overall alpha value of the sample is significantly positive at the 5% confidence level, meaning that a buy and hold strategy from January 2016 to July 2018 will produce a daily alpha value of 2.20 basis points. In 2017, the alpha value was significantly positive at the level of 1%, and in 2018 it was significantly positive at the level of 0.1%, but it was not significant in 2016 although it was positive. The significant difference in Alpha indicates that as the Bitcoin price trajectory attracted more investors' attention in 2017, holding a combination of these blockchain-related stocks is a strategy to generate excess returns, while the lower in 2018 The alpha value is in line with the downward trend of Bitcoin price. In the fifth to eighth columns, we added bitcoin returns as an additional variable to explain portfolio returns. Throughout the entire sample, Bitcoin returns were positive, although not significant in 2017 and 2018. Given Bitcoin's severe volatility, this may be due to the market's emphasis on long-term prospects rather than short-term performance. 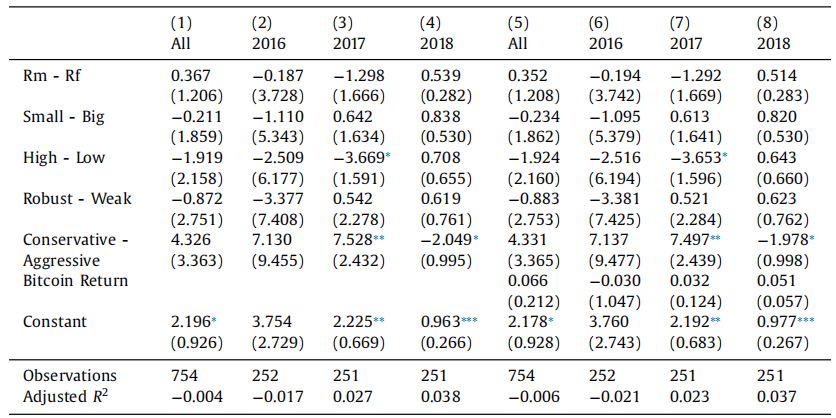 The following table shows the excess returns of the US portfolio by size. Columns 1 to 4 record the significant positive alpha values ​​of the first three quartiles, which decrease downward with the size category. Among them, the portfolio invested in larger companies did not show statistically better performance. In columns 5 to 8, we still introduced Bitcoin's rate of return and found that it was not significant.

In the era of the Internet bubble, there were no universal tradable assets that could be used to capture growth opportunities, not in the blockchain era. Considering that Bitcoin is a sign of the development of blockchain technology, we suspect that our findings indicate that Bitcoin's performance is related to the market's perception of the underlying technology. However, we also find evidence that there are potentially unknown variables that drive portfolio performance over time. It remains to be seen whether this relationship is limited to our sample or will continue to develop as the market taps into the potential of Bitcoin and blockchain.

The following is a screenshot of some reports

Lawyer Stephen Palley: ICO boom is just a flash in the pan and will not happen again