The content of today's interpretation is mainly divided into three aspects:

The first aspect is the beginning and end of the event of Fcoin;

The third aspect is some suggestions made by Shu brother personally.

First, the beginning and end of the Fcoin incident

Fcoin is an exchange created after the departure of the original Huobi CTO. After the establishment of the exchange, it launched a trading mining fire for a period of time. The trading volume once rushed to the top of the entire network, which brought huge benefits to major exchanges. pressure. When all the big exchanges also launched corresponding trading mining policies, the trading volume of Fcoin plummeted.

On February 10, the exchange Okex issued an announcement saying that it would destroy some OK platform coins. So OKB surged 33.07% in 24 hours. The destruction announcement is a huge stimulus for all exchanges, and of course also includes Fcoin. At 7 pm on February 10th, Fcoin also announced that all the platform coins held by the team were destroyed.

The most interesting is the announcement issued on February 13th, "Announcement on the Latest Progress of System Maintenance and the Opening of Withdrawal Applications." The most important of these is the second: due to the loss of key personnel of the team, and some systems and data are severely damaged. 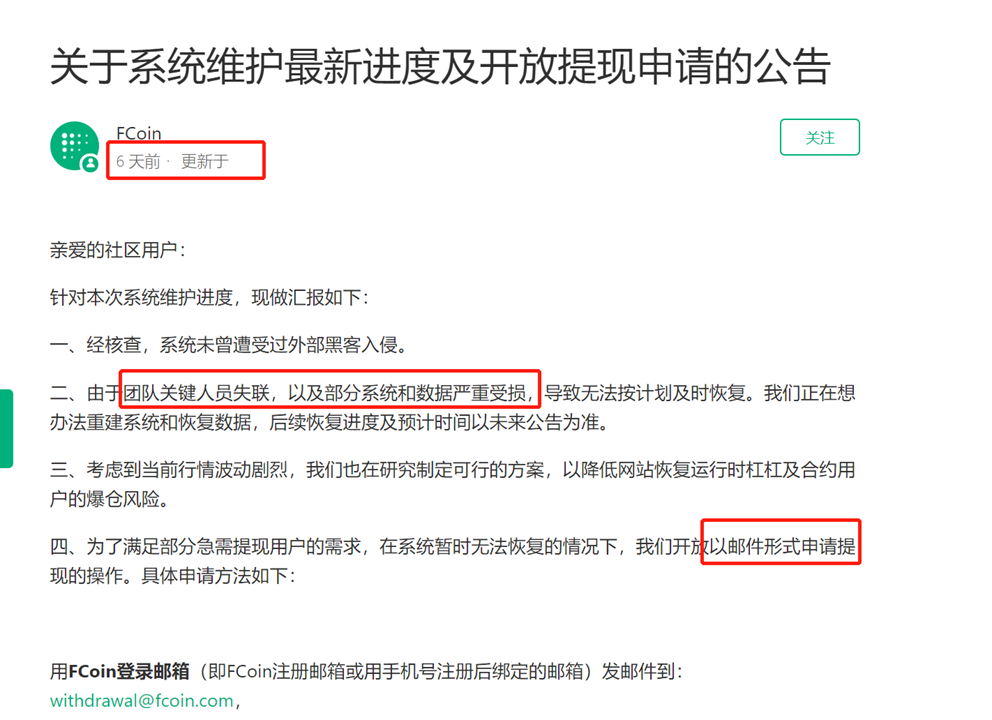 This is the picture above. Why should we emphasize this one?

Because there are rumors from the outside world, because the destruction of the platform currency held by the team led to damage to the interests of the team members, the key maintenance personnel logged in to the system background, deleted a lot of core data, and left. The announcement said: The key personnel of the team lost contact, and some systems and data were severely damaged. Instead , it seems to verify this rumor .

Only a few days later, Zhang Jian issued another statement, which denied the rumor. According to him, it is because of "the reason for the data error + decision error".

Although he denied the rumors, he did not explain why the previous announcement would say: the problem of missing key members of the team. Therefore, I personally believe that the data is wrong, financial issues, and I also believe that the team internal rumors are also true. After all, data errors and financial problems are long-term problems. The outbreak of system problems occurred shortly after the declaration. It should be to destroy the team's holding of platform currency.

After synthesizing the statements before and after, make the following inferences:

1. Rumors may be true because the team lost contact and data loss broke out after the declaration was destroyed.

2. Data errors + decision errors + inability to pay may also be true. After all, a new exchange is running wild because of transaction mining. It is normal to have financial and data problems.

3. The statement states that the withdrawal application can be made by mail. Do not be too optimistic and believe that it may be just that Fcoin is in order to circumvent the law. If you don't acknowledge that the account is running, this is fraud and you need to bear criminal responsibility; while admitting that the account is reviewed and withdrawn slowly by mail, it is only civil liability.

4. Because Fcoin is called "community management", who will be the subject of real civil liability may need to look at the legal interpretation further.

Exchange framework and cause of death

Therefore, a bank is actually a pool of funds, bringing everyone's money together and lending it out.

The structure of the exchange is actually exactly the same as that of the bank, and is divided into a wallet and a trading system .

The first piece is called a wallet.

Exchange boss's wallet, so what if the boss is dead? The wallet key is gone, the exchange's fund pool cannot be moved, and the exchange is almost complete. Last year, an exchange boss suddenly died. The members of the exchange team didn't know the private key of the wallet.

The second part is the trading system .

The transaction system has nothing to do with the wallet.

The trading system is essentially a matching system. That is, Zhang San wants to sell, Li Si wants to buy, the system matches these two together, and then it charges a certain procedure fee. Everyone finds that in this mode, the number of users needs to be continuously increased, and the user's activity is constantly increased. Only with a large user base, the fee charged for high user activity will be high.

1) The transaction system is for you, and the actual wallet is not directly related.

2) You only transfer your own assets from your wallet when you advance funds.

3) When the exchange wallet has no assets, the accounting system shows that you have assets, and you have no way to transfer the assets.

But then everyone found out that after issuing the platform currency, it can stimulate the platform currency price through various marketing activities, thereby stimulating a large number of users and a large number of transactions. For example, the "transaction is mining" model pioneered by Fcoin has caused a crazy influx of users and crazy transactions. As an emerging exchange, the transaction volume surpassed the old big exchanges in a short period of time and became the number one. That lucrative transaction fee has made the exchange crazy that the virtual platform coins issued by itself have become real gold and silver, and they can become hundreds of millions of dollars as long as you master the time. Therefore, there is a greater willingness to trade to do various things to stimulate the rise of the platform currency price. As shown below:

Because of this, various marketing mechanisms have emerged. Of course, the destruction mechanism is one of them, and the acquisition mechanism is also a solution to raise the price of currency. But all kinds of marketing methods have been done too much, but have not produced any actual value, the market may not always pay.

In other words, always walking by the river, how can we not wet shoes. There are always some routines to play, and one day I will play myself in. This Fcoin incident is actually a model. Of course, the platform will have a variety of death methods, let's summarize them:

Cause of death on the exchange

We briefly summarized a few reasons as shown in the figure above:

When the wallet key is forgotten or cannot be obtained, for example, the dead platform boss causes the entire platform to be unsustainable because of lack of funds.

Almost all exchanges have suffered hacking attacks. The most well-known death toll is the Mentougou Exchange.

When users come to the exchange platform to withdraw cash, and the platform does not have so much funds, it may cause problems on the platform.

Many funds and MLM disks were set up for the purpose of running the exchange. When they ran, the natural exchange died.

In view of the large number of funds and the death of exchanges or wallet software caused by MLM disks running away, we carefully analyze this issue.

First of all, the so-called exchange or wallet software they build is often just an app, not exactly a real matching system, but often just a page showing the rising currency price. Of course, even if there is really a matching ability, there is no trading depth. When they first set up the system, they were running.

We briefly summarize the reasons for running: As shown above, a brief summary is as follows:

1) The collapse of the economic model

The life cycle of a general fund disk is only 6 months to 24 months, but now its life cycle is also getting faster.

2) Sudden changes in the external environment

Some internal problems in the fund tray will also cause the prophets to donate and run away.

Some fund traders feel that they have a more secure income channel and may close in advance.

Sudden severe blows by the country will cause traders to fear leaving the game early.

Three or a few suggestions

So, in this situation, we make a few suggestions:

You stare at that point of interest or rebate, but others stare at your principal.

2) Try to choose the largest exchange

The larger the exchange, the lower the probability of death or running away, so the security factor will be a little more.

3) Funds should be dispersed

Don't store your funds in one place. Your own wallet and several large exchanges can be stored separately.

4) Try to have a safe and stable income channel

5) Fund transfer must be tested first

There are many viruses and Trojans on blockchain assets now. Don't save the private key on the mobile phone, mailbox, or network disk; copy it to a small note and put it in the safe. Confirm the address before the transfer, because your wallet address can be automatically replaced by a virus.

8) Don't trust the announcements of various platforms too much

Each project party has its own interests, so do not completely believe in the announcement, but have your own analysis and judgment.

So, we simply make a summary:

First of all, we talked about the event of Fcoin. As an emerging exchange that skyrocketed through “transaction mining”, the platform was shut down shortly after the announcement of the platform currency was destroyed, allowing countless users to lock in it.

Finally, we gave a few suggestions for investors in ordinary blockchain assets.

President of the All-Union Mergers Association: Based on blockchain technology, encourage private enterprises to repair credit

The founder of ICOBox fined $ 16 million has lost contact, and the company's agent has already left

The data shows that the real-time computing power of Bitcoin is 63.68 EH/s.