In this list, people have found various institutions. From Internet giants such as BATJ to traditional companies, from financial institutions to the judiciary, everyone is exploring the various applications of blockchain.

However, as soon as the filing list came out, the whole industry ushered in a round of crazy speculation. Some commentators have shouted that the blockchain industry will get a "right name". On the first A-share trading day after the list was released, the so-called “blockchain concept stocks” had a daily limit.

Calm observers began to appeal to the rational interpretation of blockchain information filing to avoid over-interpretation. Some practitioners pointed out that filing is only the first step for enterprises to carry out blockchain business.

After the currency bubble ebbs, the blockchain industry is returning to rationality. Only by supervising, cooperating with practitioners can we create long-term prosperity in the industry.

One and a half months after the implementation of the Regulations on the Management of Blockchain Information Services, on the afternoon of March 30, the National Network Information Office released the first batch of domestic blockchain information service filing numbers.

197 blockchain projects from 18 provinces, municipalities and autonomous regions across the country appeared on this list of filings. 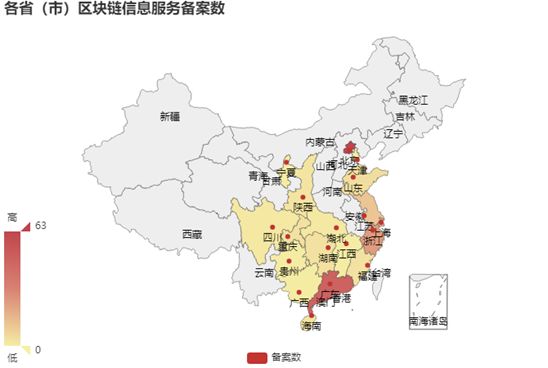 These blockchain projects present a distinct geographical distribution. Of the 197 projects, 165 are concentrated in Beijing, Guangdong, Zhejiang, Shanghai and Jiangsu. Among them, Beijing is the sole seller, and 63 blockchain projects have been successfully filed. From the project content, the first batch of 197 blockchain projects that have been filed for the project cover all areas where the blockchain has already landed. Among them, traceability, deposit, and BaaS (blockchain as a service) account for the most.

Among the main items of these filing projects, there are Internet giants such as BATJ, A-share listed companies, financial institutions, and judicial organs such as the Beijing Internet Court.

According to incomplete statistics, the number of A-share listed companies involved in the first batch of blockchain filing projects has reached 14, including Hailian Jinhui, Yijian, and Anne. Stimulated by the news, most of these stocks were daily limit on April 1.

Financial institutions are another major force in the "recording army."

Among the financial institutions, the banking department is also one of the focuses of attention on this filing list.

Zheshang Bank has entered into the filing list of five blockchain projects, making it one of the main companies in this project.

In addition to Internet giants and financial institutions, this list of filings has also revealed the blockchain ambitions of many traditional companies.

SF Express, Haier Electric and even Home Inns have appeared on this list of filings. The strange faces of these blockchain worlds have already begun to lay out the blockchain industry.

In addition, the blockchain information services of some administrative service agencies have also entered the first batch of filing lists.

The security chain is similar to the balance chain, and it utilizes the characteristics that the blockchain cannot be falsified, providing the parties with data solidification and certificate storage functions.

Looking closely at this list of filings, it is not difficult to find that Internet giants such as BATJ have long become a force in the blockchain world.

Among them, Baidu Super Chain is Baidu's self-developed public chain platform. It has multiple billing nodes and supervisory nodes in the world, and adopts its own "TDPoS" mechanism to reach a consensus.

The Baidu blockchain engine BBE is compatible with Baidu's self-developed superchain, Ethereum and super-books, and is a blockchain solution provided by Baidu's Baidu cloud.

As early as last June, the Hong Kong-based version of Alipay Alipayay launched a blockchain-based cross-border remittance service and realized cross-border transfers from Hong Kong to the Philippines. At the press conference, Ma Yun said: "This may be the project I have been most concerned about in the past six months."

Despite the differences in the main business, BATJ did not miss BaaS in the layout of the blockchain. This field has become a battleground for BATJs.

"BaaS services are mostly based on the alliance chain, do not issue coins, do not target C-end users, and there is almost no policy risk. More importantly, Internet giants are now in the cloud service field, and they are gradually paying attention to the industry Internet. The BaaS services for B-ends are in line with their development direction," one analyst pointed out.

In fact, not only BATJ, but also foreign technology giants have long been in the BaaS field. The BaaS concept was first proposed by Microsoft and was integrated into Microsoft's cloud service platform Azure in November 2015. And the old technology giant IBM, also launched its own BaaS platform in 2016.

“Record is the only way for most domestic blockchain practitioners.” Lecheng, the head of an Internet enterprise blockchain project, told a blockchain reporter.

"But there is no need for the outside world to interpret this too much." Le Cheng said, "We understand that the blockchain filing, similar to the company's industrial and commercial registration, website domain name filing, is just the basic work of the blockchain enterprises to conduct business."

“The website of the website has a list of the blockchain projects. Some media said that this is the symbol of the “synonym” of the blockchain industry. Some people also played the banner of “receiving the government”, which is an over-interpretation of the news. "He says.

The website also clearly stated in the announcement: “The filing is only the registration of the relevant information on the main blockchain information, and does not represent the recognition of its institutions, products and services. No institution or individual may use it for any commercial purpose.”

"We even noticed that some companies that appeared on this record list had previously issued coins and even been questioned 'cutting the leeks', and the reputation is not good." Le Cheng said.

“The promulgation of the first blockchain information filing list is an important step for the regulatory authorities to strengthen the supervision of the blockchain industry content.” Zhang Cheng, a lawyer from Jincheng Tongda Law Firm, expressed his opinion on a blockchain.

In his view, the supervision of the blockchain industry by the regulatory authorities can be divided into three parts – financial regulation, content regulation and technical supervision.

Financial regulation has already begun. As early as December 2013, the central bank and other five ministries issued a Notice on the Prevention of Bitcoin Risk for Bitcoin.

On September 4, 2017, the seven ministries and commissions including the People's Bank of China issued the “Announcement on Preventing the Risk of Token Financing”, calling for the suspension of ICO and the domestic Bitcoin exchange. This is also an important measure of financial supervision.

"The Regulations on the Management of Blockchain Information Services, which was introduced this year by the Internet Information Office, is part of the content supervision." Zhang Wei said.

According to the requirements of the “Regulations”, the blockchain information service provider shall indicate its record number in a prominent position such as the Internet station and application program that it provides external services.

“This is similar to the supervision of social media such as Weibo by the website. For example, based on blockchain technology, if the operator (such as a node) is responsible for this, it will be regulated.” Zhang Wei told a This blockchain reporter.

In addition, Zhang Wei believes that the introduction of the blockchain information filing list has also played a certain role in the demonstration of blockchain enterprises.

"This is the beginning of the content supervision of the blockchain industry. The introduction of the list of records clearly states that blockchain technology companies should file for filing as long as they meet the requirements of the main body," Zhang said.

Consistent with Lecheng’s point of view, Zhang Wei also called on investors to look at the list rationally.

"The Regulations on the Management of Blockchain Information Services" is very clear. 'Record is only the registration of information about the main blockchain information service, and does not represent the recognition of its institutions, products and services.'" Zhang Wei said "That is to say, this list cannot be used as an investment reference, or even as a basis for legality of other parties in the record."

“The blockchain concept stocks have collectively increased daily limit, which is obviously the investors in the secondary market, and they are speculating with the announcement of the filing information,” said a blockchain industry practitioner.

He believes that if the blockchain industry wants to avoid becoming a tool for capital speculation, it must still do things in a down-to-earth manner.

Only then can the blockchain be able to name itself.