Bitcoin's Secret History: How Much Bitcoin Satoshi has

Rather than who is Satoshi Nakamoto, some people, including the founder of Digital Currency Group Barry Sillbert, think it is more important to focus on how much Satoshi Nakamoto holds and whether he will sell it in large quantities. Imagine that in the era when Bitcoin can be mined with CPU, the GPU gentleman agreement still exists, the blockchain rewards have not started to halve, and there are few miners, the number of Bitcoins that Satoshi Nakamoto can mine must be considerable.

According to a 2013 analysis by Bitcoin blogger Sergio Demian Lerner, this value could be 1 million. His rationale is that the hashrate of the Bitcoin network has been at a very low level in 2009, which is about 7MH per second, which is equivalent to the monopoly level of only one miner; and this level of computing power is 14 days before Bitcoin was launched. The hash values ​​are almost the same. Based on the above logic, Sergio believes that the entire network during this period is likely to have only one miner, Satoshi Nakamoto.

However, the claim that Satoshi Nakamoto had been mining alone for the first 14 days of Bitcoin was questioned by most members of the community; many people stood up and said that they remember participating in mining during this period. The Hash faction has also mentioned in the previous stories. Satoshi Nakamoto's active contact with members of the cryptography mailing group at the beginning attracted a group of early supporters for Bitcoin; therefore, the Bitcoin network reached the block height At 70, the first miner Hal Finney other than himself was ushered in.

To further prove his point, Sergio again posted more convincing arguments on his blog a few days later. He tracked the data called ExtraNonce, part of a coinbase transaction, and came up with the chart below. According to the description of the article, as ExtraNonce changes, it will affect the block header information upwards along the merkle tree. After Sergio's mapping, it was found that the slope of ExtraNonce increases with time and many slopes have similar gradients; this represents to some extent that all black lines belong to a single miner, and this miner is likely to control nearly a hundred Ten thousand bitcoins. 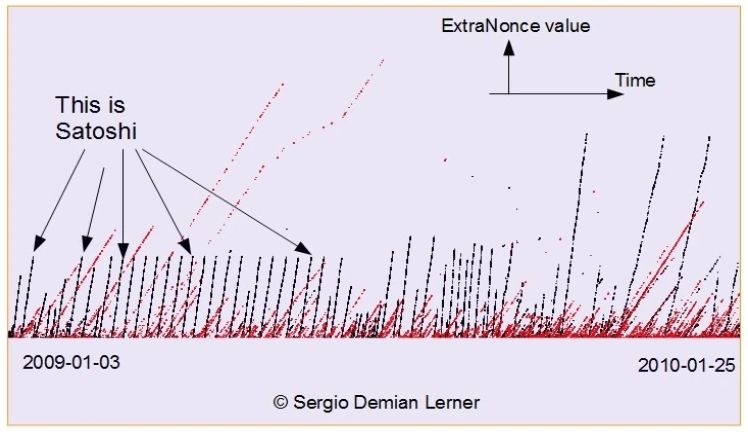 As the saying goes, there is a picture with truth, although it is difficult to understand and evaluate whether the gradients of the slopes are really consistent and there is no overlap, and the parties also said that they cannot be 100% sure that the blocks represented by the black dots are all Satoshi Nakamoto; but the images themselves Is very persuasive. To this day, a large number of people still think that Satoshi Nakamoto may hold millions of Bitcoins.

After reviewing Sergio's analysis in 2018, BitMEX Research, known for publishing rigorous investigation reports, also agreed with the blogger's point of view, but only valid until August 2009. Before August, 22 slopes did have similar heights and slopes (approximately 4 ExtraNonces were added to each block); however, the situation changed after August. As the slope of the slopes increased, the gap between the two began to change. width. Therefore, the judgment of the naked eye is not necessarily the truth of the truth. The dominant miner (most likely Satoshi Nakamoto) may dig out less than 1 million Bitcoins, and 600,000 to 700,000 are more objective Estimate.

But whether it is 1 million, 600,000 or 700,000, it is not a small amount; if calculated according to the current bitcoin price, Satoshi Nakamoto is already a proper billionaire.

Xiao Lei: Blockchain is the next Internet dollar super system, and the only US opponent is China

Opinion: We are still in the speculative phase of the encryption industry, and the bubble burst has not yet arrived.

Bitcoin smashed 19 times at the $10,000 mark in two months, and may not see 4-digit bitcoin again after this time.