Abstract: The market changed rapidly, the altcoin fell sharply, bitcoin fell below the monthly trend line, the market shifted into a deep adjustment, and the panic mood increased, but the intensity of off-market capital inflows did not weaken, and the possibility of short-term fluctuations Larger. Today, the Hurun Global Wealth List announced that a total of six rich people in the crypto asset industry are on the list, but the wealth of crypto asset holders has not been considered, which may be just the tip of the iceberg in the crypto asset industry.

The Bitcoin strength index was reported at 83.94 points, with a 24-hour rise or fall of + 2.84%. The relative performance of altcoins in the entire market has obviously weakened; the Alternative sentiment index is 41 (previous value 44), and the market sentiment is expressed as fear; ChaiNext USDT is off-market The discount premium index was reported at 101.48, with a 24-hour rise or fall of + 0.09%, and the intensity of OTC fund inflows increased slightly.

Today, the Hurun Research Institute releases its annual Hurun Global Wealth List. According to statistics on January 31, 2020, the number of entrepreneurs with billions of dollars in the world reached a record 2816, an increase of 346 from last year. Among them, 6 entrepreneurs in the blockchain and crypto asset industries are on the list. They are Zhao Changpeng, founder of Binance, Zhan Ketuan, co-founder of Bitmain, Xu Mingxing, founder of OKex, Chris Larsen, founder of Ripple, Li Lin, founder of Huobi, and founder of Coinbase By Brian Armstrong. Four came from crypto asset trading platforms, one from a mining machine manufacturer, and one from a blockchain technology company.

From the perspective of wealth distribution, Bitcoin is mainly distributed in the balance address of 10-10000 BTC. Among them, 10-100 BTC address balance accounted for 24.45%, 1000-10000 BTC address balance accounted for 26.86%, the latter concentrated the organization's holding address. In particular, the top hundred wealthy addresses are mostly cold wallet addresses of trading platforms or trustees. This can indirectly indicate that a large number of crypto asset traders or holders will place their assets on trading platforms or custodians instead of using private keys to save them.

After the BTC shock converged, it changed its course downward, and the downward adjustment range exceeded expectations, and the market panic increased. On the daily line, Bitcoin fell below the 30-day moving average and continues to fall. If it cannot be repaired to more than $ 9,600 in a short time, it will be mainly adjusted in the near future. At present, there are more than 70 days before the halving of Bitcoin, which is expected to further cash in, only after the market has fully adjusted.

Today, the SEC will review Wilshire Phoenix's Bitcoin ETF application again, and the market may be affected by the news. Although the current market is less likely to pass, it does not rule out the possibility of good news. The market may experience large fluctuations in the short term, and try to avoid fluctuation risks.

ETH has fallen sharply, there has been a panic disk, and the volume can be released more obviously. It has not fallen below the 30-day line. There will be a certain rebound in the short term, mainly linked to bitcoin.

LTC fell below the 5-day line again, but the W-type went into the M-type, but did not fall below the previous low, and the short-term linkage of the Bitcoin range fluctuated.

EOS was relatively resilient yesterday, but today it made up for losses, and the amount of kills could be more obvious. It did not fall below the lows of the previous few days, and was mainly based on short-term linkage.

Yesterday evening, most of EOS's super nodes passed the proposal to reduce the inflation rate to 1%, which may be one of the reasons for the resistance to the decline yesterday. However, the destruction of more than 34 million EOS was good, and it did not change the downward trend of EOS.

The 200-day moving average on the BTC station is expected to increase by halving. BTC is expected to emerge from a wave of rising prices. There will be a certain amount of upside in the near future.

Wait for stabilization, wait and see. 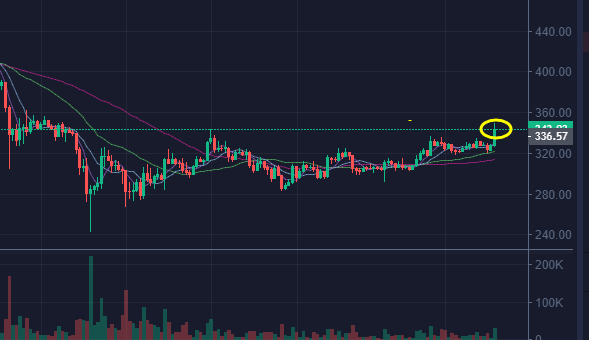 An investor filed a lawsuit against up to 12,000 accused for alleged illegal activities such as cryptocurrency fraud

FCoin Community Committee: has in-depth communication with Zhang Jian, or will restart FCoin

Huang Lei, China Academy of Science and Technology Development Strategy: 5G will accelerate the integration and development of technologies such as blockchain