On February 20, 2020, the official Filecoin blog updated the latest project roadmap. According to the project timeline shown in the roadmap, the deadline for the first phase of the Filecoin testnet will be postponed to April 17, 2020.

The second phase of the test network originally scheduled from February 24 to April 24 was also adjusted to April 20 to June 12, and the main window startup window period was postponed to June 15 in the second half of the year. Until July 17.

So far, this highly anticipated project is the fourth delayed project schedule and launch date. Even Filecoin, which contains the "Golden Key", will inevitably be criticized and complained by some followers.

To this end, the official FileCoin team also explained the main reasons for this delay in the blog:

(1) Due to the impact of the epidemic, many Chinese miners were unable to resume work on time and were therefore unable to participate in the second round of testing on time. Some members of the Chinese community also told Protocol Labs that they hope to extend the second phase of testing to 2 to 3 weeks until most miners can safely rework. Due to the safety of miners and the importance they attach to their opinions, Protocol Labs decided to postpone the second phase of testing. (From the current results, the second stage was delayed by 6 weeks)

(2) Protocol Labs believes that the most important standard for Filecoin to go online is stable security, which is the significance of the current testnet and another important reason for the delay. According to the current feedback results of the test network, Filecoin's network cannot fully guarantee its stability. In order to ensure the security of going online, it takes some time to repeatedly test and verify.

The deadline for the first phase was postponed to April 17, and the second phase and the mainnet were postponed accordingly.

The epidemic is just an "excuse" for further delay?

Regarding the cause of the epidemic mentioned by the Filecoin team, it is true that some domestic companies have not yet started construction. The deployment of mining pools and mining equipment is undoubtedly affected, and more than 70% of the nodes in Filecoin are concentrated in In China, it seems that it is indeed difficult for most nodes to participate in the test, and the delay is reasonable.
But in fact, after the news of the delayed progress of the Filecoin project was issued, the domestic community was almost a one-sided complaint.
Some users complained to Beep News,

"The futures and spot of the Filecoin mining machine have been sold for several rounds, but the benefits of Filecoin mining have not been seen for a while, can you complain?"

Some users also told us,

"The resumption of domestic enterprises is good. The overall rate of resumption in the eastern region has reached 70%, and the area of ​​Zhejiang has even recovered to more than 90%. The impact of the epidemic on miners and nodes is actually not great. The Filecoin team took the epidemic as a reason for it. Far-fetched. "

From a factual point of view, the repeated delays of Filecoin did cause "complaints", and many people used the epidemic as a reason not to buy it.
So what is the real reason for Filecoin's delay? What exactly is the Filecoin team busy with? In response to these issues, Beep News consulted the first person in IPFS mining, Feilco CEO Xie Dabao.
Xie Dabao believes that the epidemic is indeed not the main reason for Filecoin's delay in launching this time, but to say that the Filecoin team used the epidemic as an "excuse" is indeed a bit heavy.
Xie Dabao summed up to us the three main factors that delayed the projects he analyzed :
(1) Filecoin is still in the first stage of the testnet. At this stage, the Filecoin team has a very important and time-consuming task, which is to achieve the interoperability of the two clients of go-filecoin and lotus.
(2) The economic model of the token and the data structure of the certificate have not been finalized. It will take a lot of time to determine these contents.
(3) The audit of the code also takes at least two months to complete.
Filecoin was the earliest implementation of two client implementations, one was go-filecoin and the other was lotus. The reason for the two versions of the client is that when there is a problem with the code of one client, the other client can still run normally, ensuring that the entire Filecoin network will not be paralyzed by a single client implementation error. .
"There are precedents for the reliability of this model, the most typical example of which is Ethereum." Xie Dabao explained, "Ethereum also contains two nodes, which are Go-ethereum based on Go and Rust-based Parity. "

"The appearance of Parity makes up for many of the problems in the original go-ethereum. It can be said that the security and stability of Ethereum today is inseparable from this mode of operation. The Ethereum team is currently working on building Ethereum 2.0. There are up to eight implementations. "

Filecoin officials have clearly stated in the past that after the first stage of testing, they hope to enter the second stage of the testnet with multiple secure, high-performance and interoperable Filecoin implementations.
In order to achieve this goal, Filecoin also launched two other client implementations in addition to go-filecoin and lotus-forest and fuhon. The four implementation methods have followed up at the same time, which is almost unprecedented in all blockchain projects that have not yet launched the mainnet. This fully shows that the Filecoin team puts the security of the mainnet first.
Now the first stage of the test is just to complete the mutual communication and unified standards between the two versions of go-filecoin and lotus, which means that the test of interoperability between multiple versions and stability will still be very important in the future. Huge workload.
So even after repeated delays, Filecoin's current roadmap is still marked as "tentative." 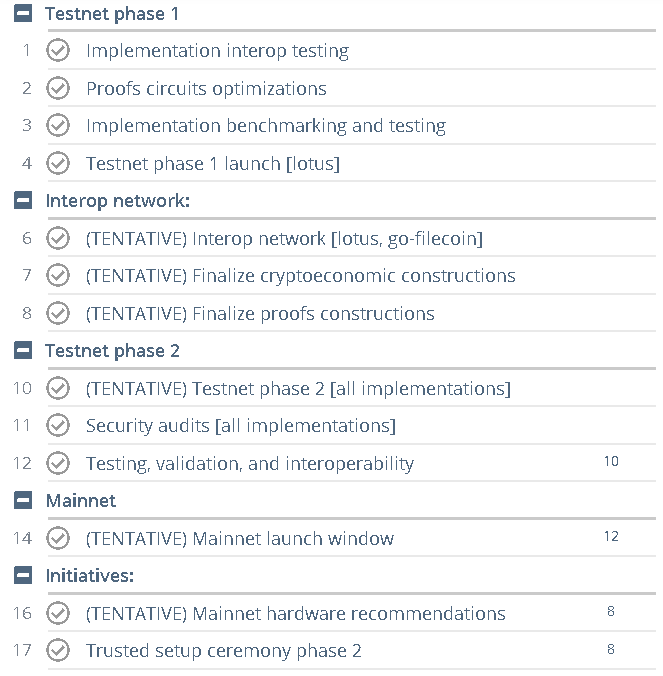 In the latest project route table, there are still many stages in the "tentative" state
In addition, Xie Dabao also mentioned that "the workload of proving circuit optimization has also contributed to the extension of the first phase of the test network."
Currently, Filecoin uses GPUs to complete zk-SNARK zero-knowledge proofs. Xie Dabao pointed out that the GPU's optimization speed is still relatively slow, but Filecoin's team hopes to reduce the GPU's proof generation time to 1/2 of the original through circuit optimization.
"With the project as the starting point, these code updates, tests, and performance leap forward are moving in a more stable and positive direction. So to a certain extent, this delay seems to be somewhat affectionate. That's fair, "Xie Dabao concluded.

Will FileCoin be delayed again?

For Filecoin's repeated delays, many followers have gradually been worn out of their patience and expectations, but many people are still confused about whether Filecoin will regenerate the delay in the future. In this regard, Xie Dabao also expressed his views to us:

"You can see from the development log of the main developer of the lotus client that Filecoin-related code is updated frequently. That is to say, the official team's development tasks are also very heavy, especially between the two versions mentioned earlier. Interoperability. And the crucial token economic model will not be finalized until April 17 before the second phase begins. "

Xie Dabao said that the bugs not yet found in the code and the economic model of the token are very large variables. Combined with the time nodes in the roadmap, the standard is still "tentative". It is not impossible to postpone it later. of.
"The conclusion of the first phase of the testnet in April is very important, because after the second phase is opened, the testnet is already in a relatively stable state. There will not be too many new features at that time, and the code will not change. It will be very large, and the progress of the entire project will be basically determined. "
As a group expecting Filecoin or investing in Filecoin mining, people like Xie Dabao who have a moderate attitude towards Filecoin's current status are not in fact the majority.
Miner Wang Yu (pseudonym) revealed to Beep News,

" This delay has caused the most complaints from the miner community, and many miners can't sit still. "

Wang Yu pointed out that at present, the test network of Filecoin has more than 3PB of data. In other words, as of now, there are hundreds of thousands of servers running, and a large number of mining machines have also entered the state of preparation. But now the project has been postponed again, and the interests of miners who have invested in real gold and silver have been directly damaged, and naturally the biggest grievances.

From Wang Yu's beep News, I also learned that a considerable number of miners bought mining machine products as early as 2018 and 2019, but at that time, the test network was not yet online. Can I mine or not? Any gains are still pending.

By the end of 2019, Filecoin officially requested to add a GPU for zero-knowledge proof calculations, and later stated that it no longer supports 1GB sectors and instead supports 32GB sectors.
In terms of FIlecoin's official series of operations, the earlier mining machines may have been eliminated in large numbers. If the mainnet line is prolonged or there are some variables in the middle, the number of eliminated mining machines will only increase. Before a large number of miners participate in mining, they face the dilemma of scrapping mining machines and making it difficult to recover costs.
Wang Yu said helplessly,

"Including myself, many miners have been impatient for this period."

From the current roadmap, it is inferred that miners want to officially participate in Filecoin mining, at least until the mainnet window period in June. As for the stability of the mainnet, I am afraid it will take longer.
Xie Dabao also mentioned in the analysis of what variables Filecoin may have next,

"June to July is a process of gradual accumulation of computing power. Before that, the miners couldn't let go. So for the miners, Filecoin's behavior this time should really be condemned."

Opinion: UAE will become the next superpower in the field of encryption

Li Lihui: China's current underlying mechanisms such as the consensus mechanism and smart contracts in the blockchain lack independent ownership