Hidden in the dark jungle of the blockchain world are a group of hackers with strong technical expertise, as well as a group of early ringgits who made a lot of money from investing in Bitcoin.

In theory, if the big guy only revealed his on-chain address, there is nothing he can do about the hacker's technical strength, but if the big guy's off-chain identity is also found out, a long-planned theft case will also begin .

This Twitter ID user, zhoujianfu, was quickly locked down as Josh Jones after claiming to have been stolen. He has a very prominent identity, once the second largest creditor of the largest exchange Mt.Gox, and Mentougou has 43,768 Bitcoin.

Almost at the same time as his Reddit post, everyone knew his real identity. It can be seen that this big man is not low-key in the online world, and it is a well-known fact that he has a large number of cryptocurrencies, not to mention a high-tech hacker.

Therefore, the hacker may have been following him for a long time.

Graphic dismantling: where the stolen assets of the killer whale account go

The theft of 1,547 BTC is the largest personal hacking case in recent years.

According to the victim, his address on the BTC chain was 1Edu4yBtfAKwGGsQSa45euTSAG6A2Zbone.

According to the address provided by the victim, CoinHolmes quickly locked the relevant address of the hacker, carried out targeted tracking and analysis, and finally drew a visual path transfer panorama: 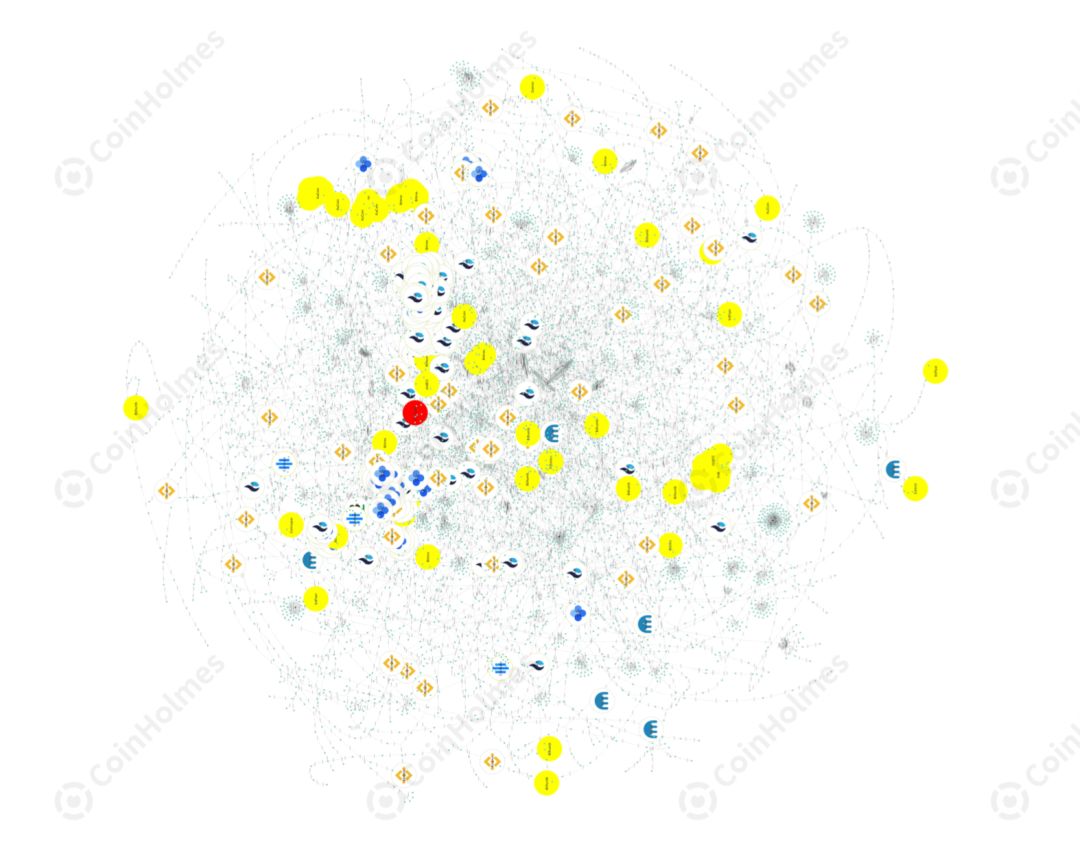 As shown in the figure, the method of the hacker's transfer of funds on the chain is very professional and complex, so that after the use of visual tools, it has no clear hierarchy and context. Bitcoin itself has a complex UTXO system. Based on this, hackers used a large number of accounts to diversify and transfer funds, and even enabled the obfuscation system. The operation was as fierce as a hacker, as if hacking into a dark jungle.

By following up and analyzing the stolen BTC assets of the killer whale account, PeckShield security personnel discovered that after stealing 1,547 BTC, the hackers quickly cut and dispersed the funds for small amounts. The purpose of the hackers doing this is to use the complexity of the Bitcoin UTXO change system to diversify accounts and funds in large quantities, increasing the difficulty and time cost of tracking. The hackers distributed funds to seven main addresses within a short period of time. The funds of each address are as follows:

Taking the address starting with bc1qre5 as an example, PeckShield used its digital asset visualization tracking platform CoinHolmes to draw its asset flow transfer diagram. From the figure below, we can see that the funds on the address are cut in each transaction and transferred to a large amount of funds. The address will continue to split in small amounts along the forward direction.

Funds are confused with other transactions

Through the analysis of the 1,547 BTC that the hacker dispersed and stolen for a short time, we can already see the professionalism and complexity of money laundering by the hacker. But after completing this decentralized operation, hackers are still further trying to make asset tracking extremely difficult through more complex obfuscation systems. 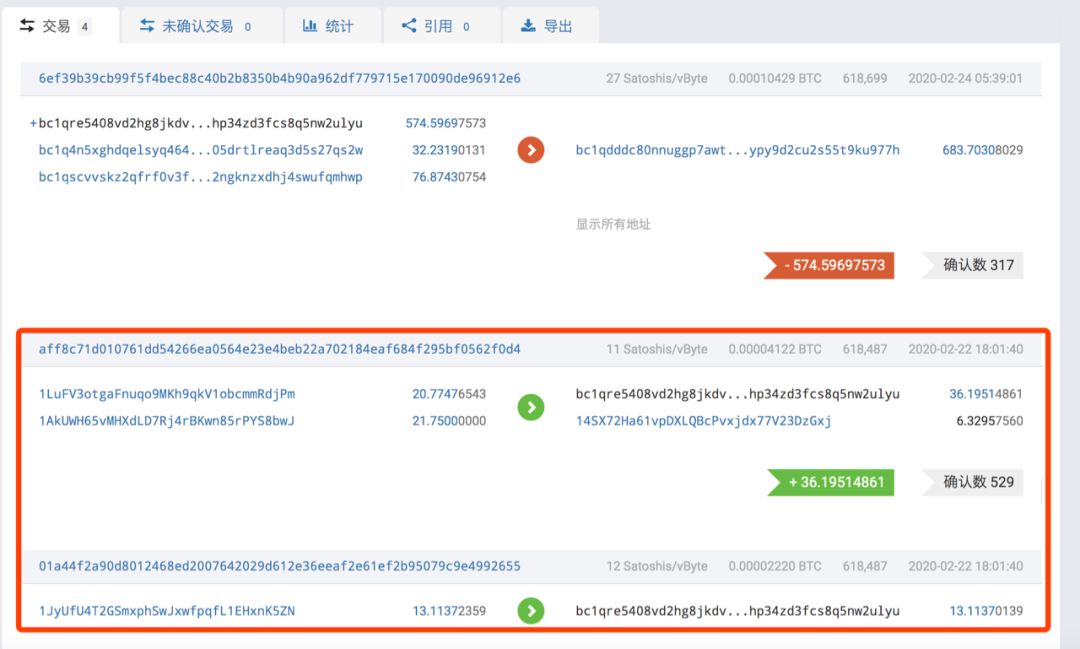 Bitcoin mixing is not a new concept. It originated from the dark web. Hackers or criminals mixed the acquired BTC to avoid being tracked.

Specifically, coin mixing involves a large number of inputs and outputs in a transaction, chaotically breaking up the transaction information, thereby making it more difficult to find out the correlation between input and output. Although the bitcoin address itself is anonymous, the related transaction data is completely open and transparent. Through the transaction address association and analysis of the data, it is possible to track on the chain and lock the identity behind the address.

Part of the funds flowed into the exchange

PeckShield security personnel statistics found that from the incident on February 22 to February 26, in just 4 days, hackers shared hundreds of addresses to transfer funds, and the deepest level reached 20 levels. In the process of fund splitting and transfer, a small amount of funds have flowed into the exchange. Relying on the massive address tags tracked on the CoinHolmes chain and real-time machine learning algorithm updates, even the newly generated addresses of the exchange can be accurately and real-time analyzed. According to PeckShield statistics, there are currently 11.19 BTC inflows to Bittrex exchange addresses starting with 1LZVz7 through multiple transactions.

The key path flow into the Bittrex exchange is shown in the above figure. As mentioned earlier, before the flow into the exchange, hackers have adopted a mixed currency approach. Therefore, PeckShield security personnel judged that some funds may not have been directly transferred to the exchange. , But was cleaned in a way similar to off-site OTC.

In addition to some of the funds flowing into the exchange, as of now, most of the stolen funds are still in the hacker's address, and PeckShield is also locking in monitoring the further movement of target funds.

PeckShield has reason to believe that this time the hacker should be a professional and skilled hacker gang.

The gang has done a lot of work from the selected target to the on-chain + off-chain tracking and breakthrough for a long time. This seems to be a wake-up call for some of the early profitable bigwigs who invested in cryptocurrencies. Don't be blind when you make money. Someone is staring at you all the time.

Although the asymmetric encryption private key system has blessed personal accounts, with the current on-chain defense engineering that computer computing power is almost impossible to break, personal private key management is actually off-chain behavior, and hackers can use users to use some of the old ones on the Internet. Rough habits make breakthroughs, and this SIM card attack is one of them.

If you only know the on-chain address, hackers trying to crack the user's private key need to go through several generations of reincarnation for hundreds of millions of years. Once the user's on-chain address and off-chain identity are numbered, the way the hacker performs the attack is also There are undoubtedly tens of thousands more possibilities. 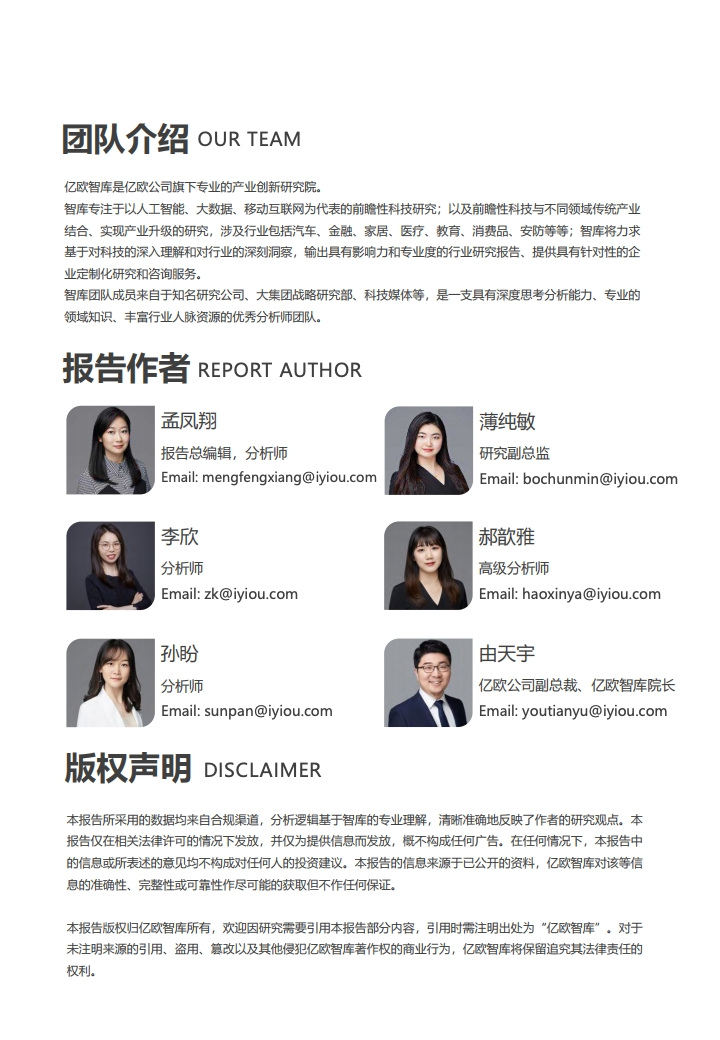