Currently, BigTech worldwide is accelerating the layout of the blockchain. For blockchain, Microsoft has its own clear definition, and believes that blockchain is a transparent and verifiable system that will change people's views on the exchange of value and assets, the execution of contracts and the sharing of data. It also considers this technology to be a shared, secure transaction book distributed over a computer network, rather than being kept by a single provider. In the layout of the blockchain, Microsoft builds technical barriers through its own technical advantages on the one hand, and builds a blockchain enterprise ecosystem through external cooperation on the other, and provides blockchain services for enterprises. This article analyzes the development history, business layout and layout reasons of Microsoft Blockchain. Microsoft is the earliest technology giant to lay out a blockchain. It first introduced Blockchain as a Service (BaaS) and decided "All in Blockchain"; its blockchain layout is based on Azure cloud services According to the latest data from the research organization Garter on blockchain cloud services, Microsoft's blockchain cloud services are topped by five technology giants including Alibaba Cloud, Amazon, Google, IBM and Oracle.

Development history: Based on Azure cloud platform, the earliest launch of BaaS services 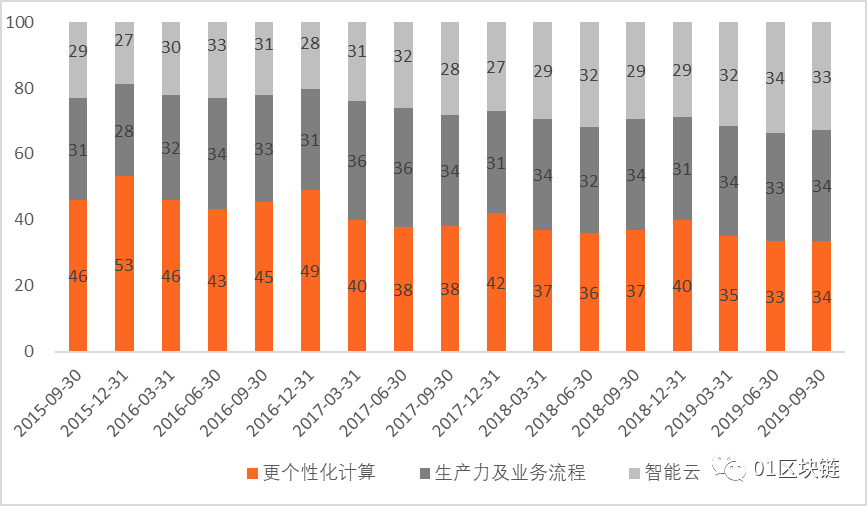 Source: Wind, Zero One Think Tank Blockchain has occupied an important strategic position in Microsoft's business layout. In 2015, Marley Gray, then the head of Microsoft's financial services technology strategy, mentioned that in order to support the development of the blockchain, Microsoft bet on almost the entire cloud service. In 2018, Microsoft CTO Kevin Scott said in an interview: " Microsoft decides on All In blockchain. " 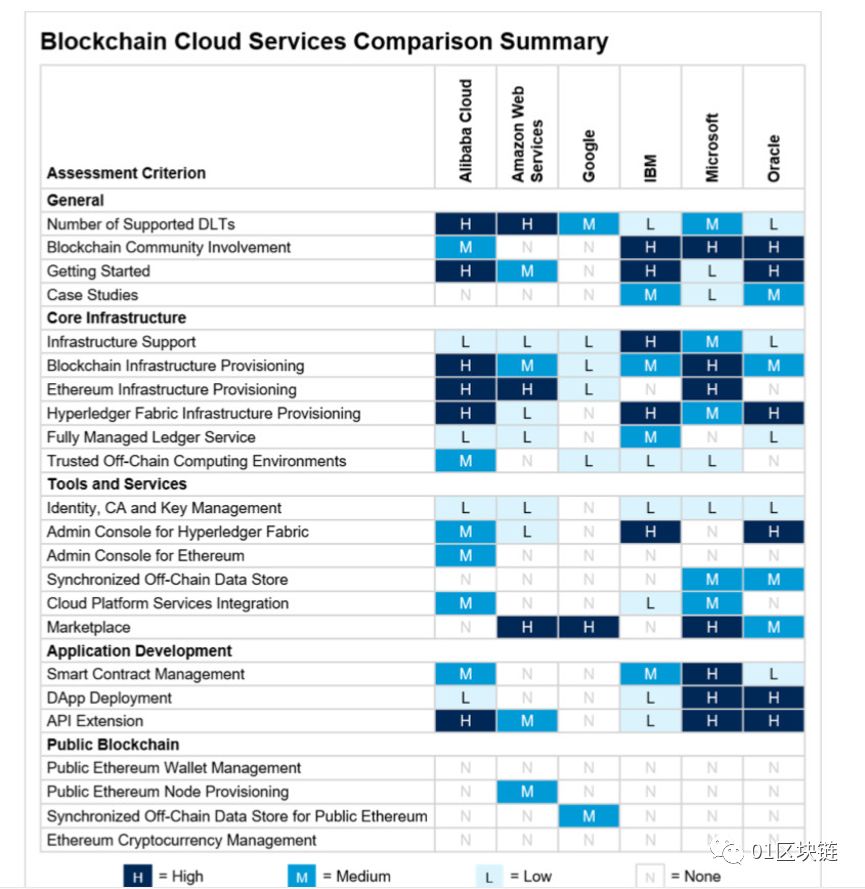 Gartner believes that on the blockchain cloud service, Microsoft's advantage is that it is one of the founding members of the enterprise Ethereum alliance. It has a high degree of support for Ethereum technology, but it does not support the Hyperledger Fabric technology architecture and has no set controls To manage infrastructure components.

Table 1: Comparison of the advantages and disadvantages of the blockchain cloud services of the six technology giants

In 2014, Microsoft began accepting bitcoin payments, and users of Windows 10 systems in the United States can use Bitcoin to purchase applications, games, and more. In November 2015, Microsoft launched the Blockchain as a Service (BaaS) platform based on Azure cloud services, becoming the first technology giant to launch BaaS services. Azure BaaS is based on Ethereum. On the Azure cloud platform, applying blockchain technology provides partners and developers with a "one-click cloud-based blockchain development environment", enabling them to quickly create public cloud-based, private Cloud and hybrid cloud blockchain environments.

Among them, the Bletchley platform is a window for Microsoft to provide BaaS services. It is an open blockchain platform driven by the Azure cloud platform. The blockchain work platform Azure Blockchain Workbench is also structured on Azure BaaS, which can simplify the application development of developers and make the creation of blockchain applications easier.

Microsoft mainly provides services for enterprise customers, but instead of developing its own public or alliance chain, Microsoft develops enterprise-level blockchain solutions based on Ethereum, Quorum, and Corda. Currently, based on the Azure cloud platform, Microsoft's blockchain products include Azure Blockchain Services, Azure Blockchain Workbench, Azure Cosmos DB, Azure Blockchain Tokens, and Logic Applications . Microsoft's blockchain service types can be summarized into three types: deployment and hosting, rapid development, and enterprise-level requirements. The purpose is to help enterprises solve problems related to blockchain applications and provide end-to-end solutions. Deployment and hosting provide customers with Baas services. It takes a lot of time for customers to establish and manage the blockchain network. Microsoft can help customers quickly deploy and manage the blockchain network. Rapid development is assisted by providing different tools and middle tiers. Customers open the connection between different components and services; while enterprise-level requirements are to help customers import blockchain services while realizing the standards of different industries and the internal security requirements of the enterprise. Figure 4: Microsoft product and service layout

Source: According to the public information of the Zero One Think Tank. In addition to using its own technical advantages to provide blockchain solutions and build technical barriers, Microsoft also actively engages in external cooperation and strives to build a blockchain service ecosystem. In January 2017, Microsoft announced three ongoing strategies at its Global Partner Conference, one of which is to build a blockchain ecosystem with partners and customers. Currently, Microsoft has hundreds of thousands of global ecological partners and tens of thousands of cloud partners. The annual growth rate of cloud solution providers has exceeded 200%.

Table 2: Incomplete statistics of Microsoft's cooperation in the blockchain field

Source: Zero One Think Tank based on public information

At present, Microsoft cloud services have formed a whole industry chain layout from IaaS (VM, Storage, Network) to PaaS (AAD, SQL, Media, VSOnline) to SaaS (Office 365, Machine Learning). According to Canalys' 2018 global cloud service market ranking, Microsoft's cloud service market share ranks second in the world, second only to Amazon, but the annual growth rate is much higher than Amazon, exceeding 80%, and the potential for cloud service development is huge.

Utilizing its comparative advantage in cloud services, Microsoft can greatly reduce the development and deployment costs of blockchain applications, and it can effectively promote the expansion of blockchain to more areas, which will have an important role in building an enterprise service ecosystem for Microsoft.

The pace of supervision is close: India has drafted a currency violation, and the US exchange has taken the initiative to remove the token.

One article at a glance: the 10-year trough and glory of blockchain

Grayscale Managing Director: Bitcoin's status as a storage value and digital gold has been solid