Today is a rare occasion on February 29. Let us first talk about the situation of global financial markets. The last week of February was also the darkest week in the global financial market in recent years. US stocks fell more than 12% in a week. On February 27, US stocks had the largest one-day drop in more than 8 years. In fact, not only US stocks, Germany , Japan, Britain, France and other securities markets fell more than 10% this week. The main reason is that the epidemic has a growing trend in Europe and the United States, and the number of new cases abroad has surpassed the domestic increase for many consecutive days. For developed countries in Europe and the United States, the potential impact of the epidemic on the economy will be directly reflected in financial markets. Gold first hit a new high as a safe-haven asset this week, but then fell by nearly 5%. It can also be seen that the normal relationship between hedging and risk-seeking has been broken, and the global epidemic escalation and new news from Turkey and Russia are aggravating the market Panic.

The heroes look back at the trend of bitcoin this week. If it is necessary to associate bitcoin with the global market, then this adjustment is a joint adjustment, which is normal. However, I personally think that although the linkage between Bitcoin and the global market is there, it is not the main one. The decline in U.S. stocks has expanded in the past two days, but Bitcoin has shown signs of stabilization before other markets. It is expected that the panic in the global stock market will ease next week. Situation, and Bitcoin may rebound ahead of the market next week.

Then, let ’s talk about the 120-day line (8370). The bull-bear dividing line. Heroes always like to use the moving average indicator to write something, because most leeks can understand it. There are many uses for technical indicators. Factions are very complicated to say, but if we perform some calculations behind them, they can be explained using a practical indicator. This is like using your phone or computer. The logic behind the work involves all aspects, but only the visual The window will appear before your eyes.

The figure below shows the crossover boundary of the 90, 120, and 144 moving averages (near $ 8,370). The 90-day line is a long-term moving average. The meaning can be roughly understood as the average price of BTC purchased in the market within 90 days. The 120-day line is also the same, indicating that the average price of BTC purchased within 120 days. The Fibonacci series moving averages that heroes like to use. Last year, we successfully used the 144, 233 and other Fibo series to accurately predict the market. Of course, these are probabilistic. Don't treat them as It ’s amazing, just use it as a reference. The 120-day line has generally become the bull-bear dividing line in the currency circle, and has obtained multiple verification results in the recent one or two years. Once it breaks through the 120-day moving average, it can be judged that the staged market has started. Bitcoin successfully stabilized the 120-day moving average on January 13, 2020, and the cumulative increase over the following one month reached about 30%. This adjustment is currently stepping back to the 120-day moving average, and then also coincides with the 90 and 144 moving averages, so if you must give a point judgment, the heroes think that the big cake has a chance to stabilize here, so it is also in yesterday ’s article Here, this point is used as the intervention point of the secondary layout . As long as it is not shocked for a while, the probability of opening the Mavericks market in March is very high. 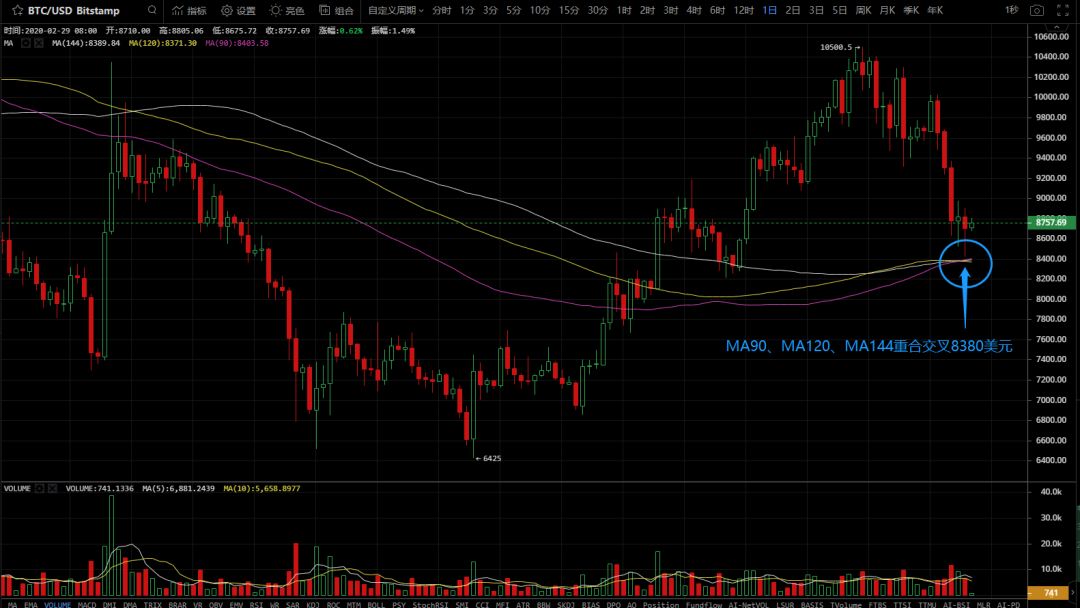 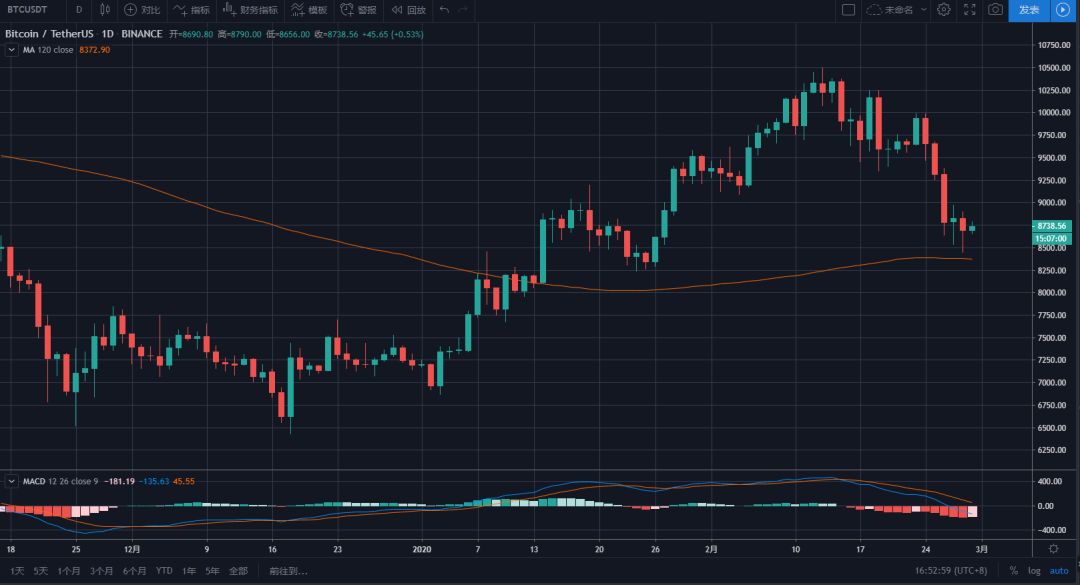 Today's analysis: After the pin was inserted last night, it was close to the point mentioned in the article. The overall idea of ​​the heroes is that BTC will stabilize near the 120 moving average ($ 8,370) to create a shock platform, and let the chips change hands at this position. , Grinding around the 120-day moving average, grinding next week will have a rebound performance. The recent operation is to maintain a bargain-hunting strategy, buy a little last night, buy a little today, buy a little tomorrow, and raise funds in this range. Tomorrow will enter March, we are looking forward to the market in March a little more. Short-term support: $ 8,370, pressure: $ 8,900.

ETH: The overall decline in the mainstream echelon is not too big. The recent upward fluctuations have been suppressed by MA30 ($ 235). The recent shocks around this point have been mainly repaired. After the MA30 breaks, it is judged to be stronger. Short-term support: $ 200, pressure: $ 235. EOS: The pins were inserted near the bull-bear divide for three days. There are also some signs of stabilization here. The MACD on the hourly line has diverged. If it breaks through the short-term suppression of US $ 3.65, it will take a wave of rebound, and you can stay concerned.

ADA: Bitcoin hit a new low yesterday, but many mainstream currencies did not reach new lows. ADA also hit the US $ 0.046 and linked back to draw back. In the short term, it will be mainly shocks. It can be distributed in batches at this price. Short-term support: $ 0.046, pressure: $ 0.052.