The profits of the Anne shares, which frequently change the performance, become a "mystery."

According to the statistics of the Shanghai Stock Exchange and the Shenzhen Stock Exchange, the disclosure of information about the blockchain concept stocks was mostly concentrated in January 2018. At that time, cryptocurrencies and blockchains were also in a hot stage. Prior to this, Xiamen Anne Co., Ltd. (stock code: 002235, hereinafter referred to as "Annie shares") has already targeted business opportunities.

According to the Securities Daily, in June 2017, Anne (002235.SZ) joined 12 companies including Xiaomi Technology to establish the first domestic copyright blockchain alliance; Anne Han CTO Hao Han said that Anne has been committed since 2016. Studying the combination of digital copyright business and blockchain technology; in November 2017, Anne shares participated in the Hyperledger Superbook Summit and announced a partnership with Superbook Fabric.

In 2018, the concept of blockchain began to be a big fire. As it was the first batch of blockchain concept stocks, the stock price of Anne shares (002235.SZ) rose sharply in advance. According to the data of Oriental Fortune Network, in January 2018, the stock price of Annie (002235.SZ) rose from 6.83 yuan to 10.99 yuan in two weeks, an increase of over 60%. At that time, there were only 4 blockchain concept stocks with A shares rising more than 50%, and one of them was Anne.

This time, in the "Net Letter Office" filing list, Anne's copyright blockchain is in the list, the main body of its filing is Beijing Edition Family Technology Development Co., Ltd., which is a wholly-owned subsidiary of Anne (002235.SZ) .

First of all, Anne's copyright blockchain can solve the problem of infringement and evidence collection in the copyright industry. Guosheng Securities analyst Song Jiaji told Odaily Sunday that the copyright blockchain of Anne can deposit the work and can be used as evidence in the future. According to the Xinhua News Agency, in June this year, the Hangzhou Internet Court publicly pronounced a case of a dispute over the infringement of the information network communication rights, and confirmed the legal effect of the electronic data using the blockchain technology for the first time.

However, the question of the right to the right, that is, to whom the work belongs, the blockchain is not actually recognized by the copyright agency. Yue Zhanfeng, director of the China Press Copyright Service Center, said that the current application of blockchain copyright confirmation is mainly in the aspect of technical deposit, and has not been fully recognized by the national copyright registration agency, and is not a true copyright registration.

Furthermore, the blockchain can solve the problem of infringement monitoring. After the blockchain platform builds the copyright content data pool, once the new work is registered, it can compare the other platform data in the data pool to monitor whether the work is stolen. However, only the platform's data pool is large enough to truly monitor the entire network, and the blockchain can play its role. According to Song Jiaji, the larger application of Anne's copyright blockchain is to deposit certificates. For infringements, it can only rely on common technologies such as crawlers, and does not establish its own unique copyright database.

Many “hot spots” attempts under the pressure of profit: lottery, VR, internet of things

According to the official website, Anne shares (002235.SZ) is a comprehensive enterprise group with Internet application and service business as its main field and direction.

On May 16, 2008, Anne shares (002235.SZ) was listed on the Shenzhen Stock Exchange. The main business is the R&D, production, sales and comprehensive application of commercial information paper. However, after three years of listing, the paper business of Anne (002235.SZ) has been declining and has fallen into losses. Under the tremendous pressure of survival, Anne's shares (002235.SZ) began to seek transformation, develop new business outside the main business, and tried different concepts such as lottery, Internet of things, VR:

These areas are once the custodian, but if it is not the tornado that has passed away, it is not yet ushered in the future. The stock price of Anne (002235.SZ) has also improved because of related concepts. For example, the stock price rose by nearly 30% in one month at the end of 2012. However, the prosperity brought about by these concepts is only temporary, and there is not enough profit behind it to support it.

Later, due to the ban issued by the regulatory authorities, the lottery business of Anne (002235.SZ) was suspended from sales in March 2015 and has not been restored so far; the Internet of Things business has quietly disappeared from the company's main business. 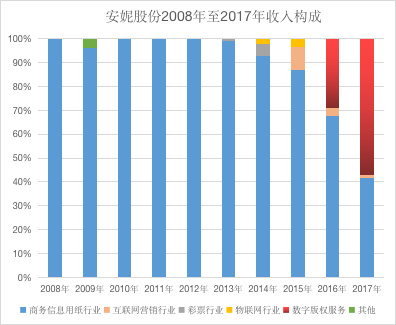 (The composition of Anne's shares since 2008, the data comes from the flush of iFinD)

Anne's shares (002235.SZ) seem to recognize this problem, so they began to vigorously lay out the digital copyright business, and in 2017 successfully set the concept of "blockchain +" to digital copyright.

Being questioned by the media, "performance is a mystery"

According to the Securities Market Weekly, the listing performance of Anne's shares (002235.SZ) has been a "mystery" and often frequently revised performance.

According to the statistics of the securities market weekly, between 2008 and 2016, Anne's shares have issued a revised announcement for 7 years.

The 2017 financial report has also undergone several revisions, and the performance is a mystery:

Frequent revision of the performance report violates the relevant provisions of the Stock Listing Rules, and those who violate the rules will inevitably be punished. The Odaily Planet Daily survey found that in July 2010, the Shenzhen Stock Exchange had publicly condemned or notified the Annie shares (002235.SZ) and related responsible persons.

However, Anne shares (002235.SZ) does not seem to learn the lesson, repeat the same mistakes. Due to the large difference between the estimated net profit and the actual net profit in the 2017 annual results forecast, Anne shares (002235.SZ) failed to fulfill the relevant information disclosure obligations in a timely and accurate manner. In September 2018, the Shenzhen Stock Exchange issued a disciplinary action against the director of the company (002235.SZ) and the chairman and general manager of the company, Zhang Jie, and the chief financial officer Xu Zhiqiang.

Combined with the history of its past frequency "hot" hotspots, this time Anne's shares (002235.SZ) into the blockchain, had to question the original intention.

If a listed company wants to “snap” the blockchain concept to drive the stock price up, it is not destined to be a long-term solution. In the past two days, the stock price of Anne (002235.SZ) soared more than 20%. However, from a historical point of view, there is no profit to support the trend of rising “蹭” concept, which is destined to be difficult to maintain. In January 2018, Anne's shares rose 60% in two weeks because of the blockchain concept, but the gains failed to continue, followed by a sharp retreat of 40% and continued to fall by 6% in February.

"The blockchain big cow" Anne shares: has always been the first hand

"The blockchain is copyrighted, but commercialization is a bit desperate."

Federal Reserve Chairman: Libra is being studied and will maintain high standards in consumer protection and regulation