Mathematics genius Wei Dai and Hash Cash inventor Adam Back are the cryptographers who actively contacted Satoshi Nakamoto for the first time; James A. Donald, who we are going to introduce today, was the first to contact Satoshi Nakamoto on the Cryptography mailing list. People who exchange discussions. 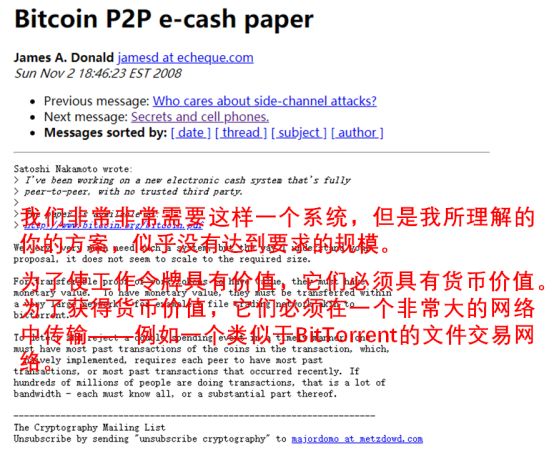 Screenshot from: James A. Donald's response to Satoshi Nakamoto in the cryptography mailing group on November 2, 2008

The Canadian liberal, who has frequently appeared on the mailing list since July 2002, raised questions about the Bitcoin system in less than 40 hours after Satoshi Nakamoto published the white paper. In James ’s view, to make Bitcoin valuable, it must have a very large transmission network like currency, such as a transaction system like BitTorrent; but from his current understanding, Bitcoin does not seem to handle large-scale transactions. Capacity and difficult to expand.

At the same time, James believes that the bitcoin system's data storage and broadband requirements for node operators may expose the network to government attacks.

"If some companies are issuing new coins, this model may be less vulnerable to attack than a single company. But the government usually chooses to attack financial networks. As I write this, the attack is still underway, a large number of Financial companies are declining. As a small currency issuer, we should reduce data and broadband requirements as much as possible. Because the smaller these requirements, the stronger the system's resistance and the less likely it is to be attacked by the government. "

However, Satoshi Nakamoto at the time did not think that expansion and broadband demand would become serious problems; he simply responded to James's questions with simple payments to verify the SPV solution and that broadband demand was no longer a limitation with the development of technology. Screenshot from: Hal Finney's response to Satoshi Nakamoto in the Cryptography Mail Group on November 7, 2008

It is also worth mentioning that James also put forward a quite predictive view in this email-Bitcoin should be a settlement system, not a payment system. He explained: "Bitcoin should have a bookkeeping layer, support the most transactions with the smallest space, and provide anonymity. It is a chaumian digital currency based bookkeeping coin. Then we can either base on the bookkeeping currency or chaumian coin Establishing a layer of privacy on top of it, just like the U.S. banking system prior to 1915 separating accounting coins and banknotes (issued by banks) … this way you can reduce transaction costs and support micro-transactions. ”Interestingly, James The idea proposed here is to some extent the same as the current Bitcoin network's off-chain expansion solution, the Lightning Network, which has the same purpose.

After the first contact, in the next half of the month, James also questioned Satoshi Nakamoto about the longest chain principle, simple payment verification, bitcoin exchange and so on. Perhaps as Hal Finney said, Satoshi Nakamoto's thesis only describes the key concepts and some data structures, and does not explain the other various rules and the verification process in detail, making it difficult for everyone to fully understand the system. So not only James, but also members of the mailing group, including Ray Dillinger, head of algorithm research at nE12, and Jonathan Thornburg, RTI International project leader, have raised questions about the Bitcoin system; Satoshi Nakamoto also responded patiently.

Screenshot from: November 8, 2008, James A. Donald discusses with Satoshi Nakamoto in the Cryptography Mailing Group

But questioning does not mean disagreement. Most of these crypto enthusiasts who asked Satoshi Nakamoto showed interest in the Bitcoin system. When James continuously asked serial questions to Satoshi Nakamoto, he also said frankly that the latter has designed a solution that can provide most people with fast and irreversible payments through the Internet without political intervention. It is very attractive; it is also a big step in the field, but the problem lies in the details. And he kept asking Satoshi Nakamoto and asking questions, just to let him complete those unspecified blind spots.