Under the epidemic situation, the domestic blockchain epidemic prevention application broke out in February.

According to incomplete statistics from the Interchain Pulse Institute (IPRI), in February 2020, a total of 42 blockchain applications were disclosed worldwide, of which 26 were epidemic prevention applications, accounting for up to 61.9%.

Judging from the geographical distribution, 37 blockchain application projects disclosed in China increased by 27.6% month-on-month. In comparison, the overseas market is rather deserted. In February, there were only five blockchain application projects disclosed abroad, including two in Japan and one each in Russia, France, and the United Arab Emirates. From the perspective of the main types of projects, of the 42 projects in February, the number of private enterprises was the largest, followed by government departments and universities. According to the statistics of the Interlink Pulse Research Institute, of the 42 application projects, 14 are private enterprises, and 7 are government agencies and 6 are universities. 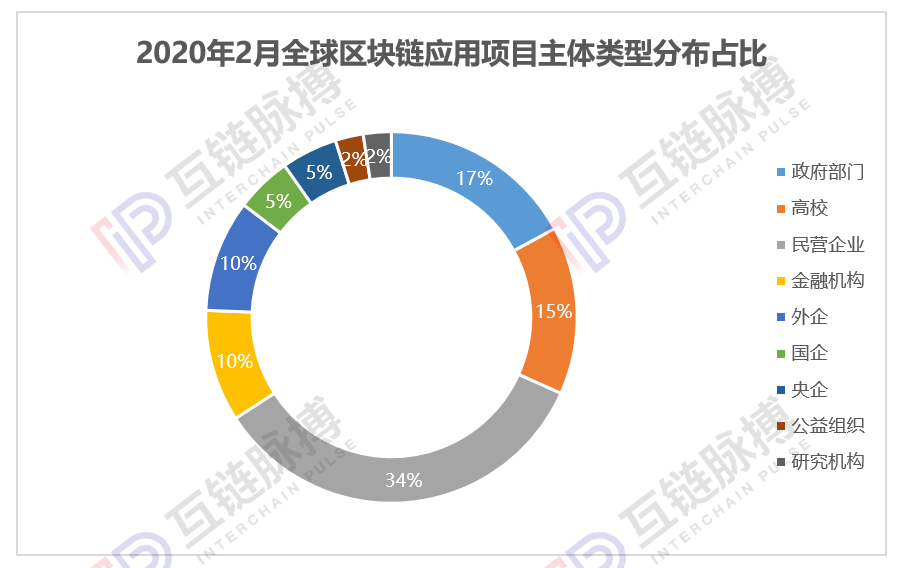 From the perspective of industry distribution, the blockchain application projects disclosed in February covered 12 areas. Among them, medical and government applications are the largest, accounting for 24% and 19% respectively, followed by the three fields of corporate services, finance, and public welfare, with projects accounting for 14%, 14%, and 12% respectively. The remaining 17% of the projects are located in 7 fields including real estate, construction, supply chain finance, and trade.

In the medical field, Xi'an Jiaotong University has urgently developed a free online health consultation, consultation and "New Crown" virus risk screening system for the Second Affiliated Hospital of Xi'an Jiaotong University. Donghua Software has established a health file and health data sharing platform based on blockchain technology, which solves the problems of comparing data of patients with the same symptoms between hospitals and sharing horizontal information about patient treatment.

In addition to epidemic prevention applications, there have also been some other applications in the field of government affairs. For example, the Ministry of Finance of the People's Republic of China has launched a national PPP comprehensive information platform based on blockchain and other technologies; Aerospace Information Co., Ltd. has launched a smart government affairs integration commercial registration second approval system in Huicheng District, Huizhou City.

Quantum chain developers, Beam Foundation and others jointly publish a solution paper based on MimbleWimble to achieve privacy assets