The recent Ethereum Denver is an important event in the crypto digital currency circle. In addition to everyone keen to discuss the new hot spots DAO and NFT in 2020 (but according to Kojima, 90% of the topics are in DAO and only 10% are in NFT). There are also Many DEFI projects have appeared, such as:
DeFiat: Committed to quickly using fiat currency to purchase any ERC20 token (currently only a few ERC20 tokens can be purchased directly in fiat currency) UpsideDAI: Afraid that the stablecoin itself still has volatility? This project helps you hedge the risk of fluctuations in DAI We often think that DEFI is the new place for ETH's value to fall , but from the second half of 18 to 19, the overall trend of ETH seems that the market does not quite accept the value in this direction. What is the problem?

There are some clues from the above projects:

I have no intention to offend the project participants. As a believer in the blockchain, I also know that the entire encrypted digital market relies heavily on such various types of innovation, but I always feel that the focus of technical bulls when setting up new projects is still in How to serve the limited needs of existing coin circle users.
And the ceiling of this market is too obvious. If from the perspective of a product manager, a good product is not a sufficient product, it is also a failed product.

If the entire encrypted digital currency world is considered as an independent world, then there is no doubt that DEFI is the financial system in this world.

There have been many points of view before (maybe I have a similar point of view), DEFI does not have enough users because the financial system is not yet perfect, whether it is speed or experience, etc., are not comparable to the traditional financial system in reality, so as long as we continue Iterative improvement, speed up, and experience will attract more users .

But in fact, just as the tenfold good theory mentioned in Peter Tier's "From Zero to One", if it is to achieve the same function and goal, it must be ten times better than the opponent (traditional financial system). DEFI is obviously an unattainable standard. It takes some time to equalize, let alone ten times better.

As far as the current development situation is concerned, aside from the performance experience, from a functional point of view, DEFI as a cryptocurrency's financial system is already very complete . We can casually list some familiar targets: 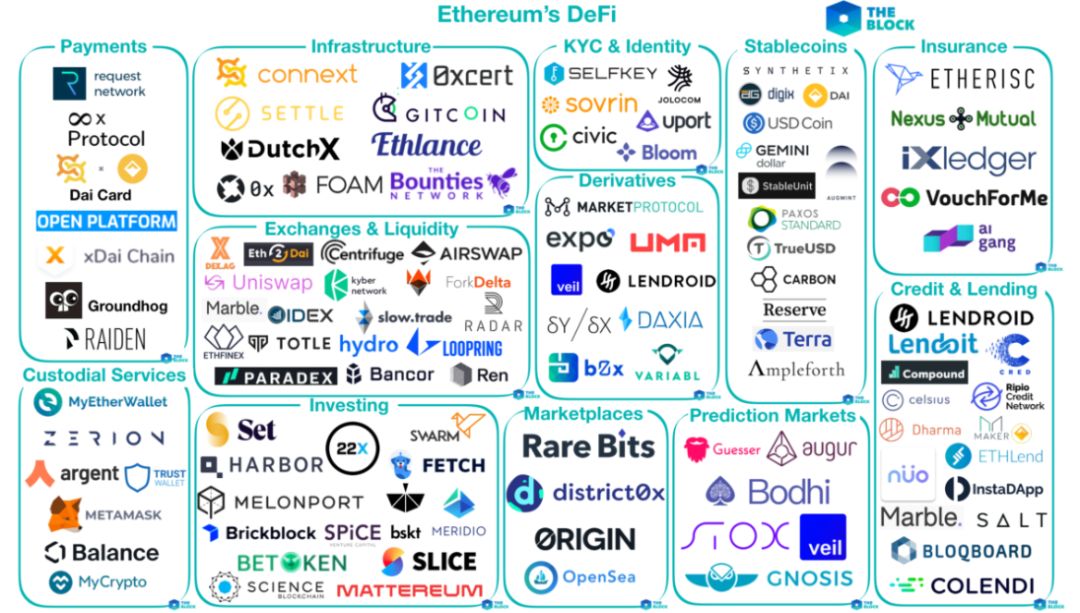 The above is a classic DEFI map made by The Block a year ago. It can be found that some projects are dead or have changed, but the basic framework and field have been formed.

Therefore, what is more important now is not to optimize a local function, but to find a key breakthrough that can bring more user traffic-out of the circle.

In my opinion, DEFI has to go out of the circle. As mentioned above, the road that "people have me better" is not accessible, and the only one left is "people have me."

Specifically, there are two refinement directions:

Start from the blind spots of the traditional financial system

Traditional finance is not everything, there are strong needs in some areas but they have not been met, and good innovation has always been the biggest advantage of the currency circle . Let us look at two cases:

One is the recent hot lightning loan . Some hackers used the lightning loan to loan 10,000 ETH and in 13 seconds, they made a profit of 51 BTC through continuous calls of multiple contracts. Although things themselves reflect security holes in some of DEFI's protocols, we can interpret other important information from them.

In this case, I will look forward to seeing the Lightning Loan Portfolio open up a corner from traditional finance and let DEFI penetrate.

The second case is a project called Centrifuge, which is still in the pilot phase.

However, although this solution solves a liquidity problem in traditional finance, the process of asset authentication and the conversion of real assets on-chain into NFT tokens still require the participation of many traditional institutions . This may not be perfect.

From the above two interesting cases, we can find that the existing DEFI can already form a lot of closed loops with applications, and the functionality of the infrastructure is complete.

We can use chainlink as the oracle to call whether it is traditional data information or on-chain contract information, or we can use the ERC1155 protocol of enjin to create various NFT tokens to meet the needs on the chain.

Everything is ready, only a blind spot in traditional finance, finding and cutting in, will bring DEFI a new world.

Enter from the payment field 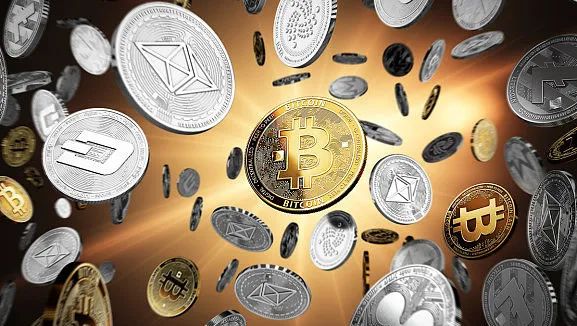 Perhaps, stablecoin? Unfortunately, it seems that stablecoins do not solve this problem well.

Let's take a look at this dining car that appeared on ETH Denver-Denvor Taco Truck. 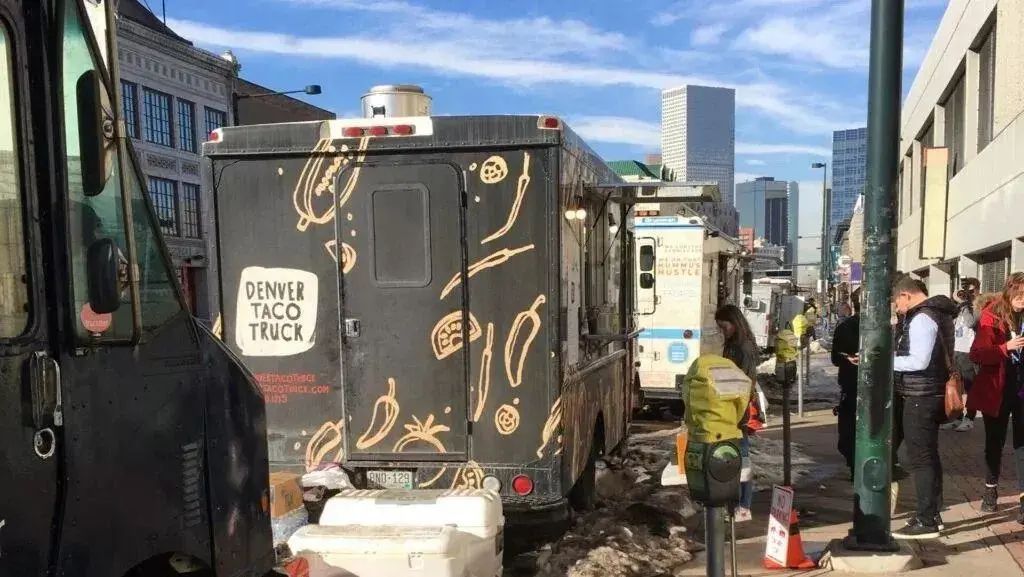 At the conference site, this dining car provides lunch, but you must pay through BuffaloDai, which is a customized version of the DAI for the conference, which can be used to pay for various types of conference-related activities, including the purchase of lunch.

The end result was that 60% of the payments were successful, and 40% failed, and had to resort to traditional credit cards. The experiments in such a group of geeks who are keen on cryptocurrencies can only reach such a level. It is conceivable that what will happen if it is extended to a wider range.

Objectively speaking, we must admit that there seems to be no particularly successful case in the payment field. Maybe in small countries such as Venezuela where the exchange rate collapses, there is a certain degree of applicability, and there are cases where people in some regions can't use bank accounts to switch to BTC, but these are too small.

As we simulated in the previous currency game (click on the blue text to read it) , it is not so simple to successfully become a widely accepted currency. What is needed is more than technical support. Rather than relying on DEFI, cryptocurrencies require a powerful group of spokespersons to fight for their rights.

Everyone in the circle understands that the most convenient point of smart contracts is that they can call each other to achieve various novel effects. Geeks are constantly creating useful module contracts in anticipation of an Iron Man combination. But how can we maximize the effect of such a combination? Here I want to emphasize that I call it the hidden rule of sight.

Let's take a lightning loan as a case. Lightning loan itself means that it only needs to complete the lending, use and return of funds in one block, then there is no need for any collateral. If the return is not completed in the same block, then the transaction is actually invalid, which means that the initial lending is also invalid, and there is no real capital loss.

Then the problem comes. After the contract is called, after the loan, the transfer of funds is used to stimulate another contract. Do n’t you need to wait for the block confirmation?

After consulting some technical people, I got the answer: the contract call does not need to wait for block confirmation. In my opinion, this is the golden key to open the product of Lightning Loan.

Indeed, all the rules of the blockchain are open and transparent, but in fact there are some hidden rules hidden in many details, and these rules may be the key points in determining whether they can exert their maximum effectiveness.

It reminded me of Slay the spire, a well-known card game on steam.

There is a card in the game that says if the opponent tries to attack you, you gain 3 power (power is used to increase your attack power). I didn't realize its importance at first, but when I found out that this card matches the turn-based game system, after repeated use, the power will be raised to a very high level, and even the opponent can be killed in one shot.

Therefore, in a field like DEFI that relies on a combination of hands to attack the world, it is not enough to just know the rules. It is also necessary to find hidden rules that have been ignored by others and cooperate to get higher damage .

Is DEFI the future?

I can only say that my expectations are, after all, he has brought us a lot of freedom and convenience. Even though DEFI cannot fully represent the future financial system, one thing is certain that DEFI's various component modules will always exist, and geeks will constantly assemble new "lightning loans" from them.

In the future, it is possible that DEFI will not function as it is today, but will appear in a form of open finance that we better recognize, and all its constituent components will not be absent .

Do you expect such a future?

Mars Finance is determined to host the Global Blockchain Developers Conference and is expected to invite 1,500 technology professionals to participate in Beijing on August 20/21.