This article was exclusively published by the author "Clear Air" authorized by Babbitt Information, please do not reprint without authorization.

I. Proposal and modification of the currency flower model

In 2017, Morten Bech, head of the Bank for Payments and Market Infrastructure Committee of the Bank for International Settlements, and Rodney Garratt, an economist at the University of Santa Barbara, California, and Rodis Garratt, BIS technical adviser, published the "Central Bank Cryptocurrency" and first proposed the "flower of money" conceptual model (Figure 1) This model not only reflects changes in currency attributes and classifications brought about by some payment innovations, but also distinguishes between two types of CBDC that may appear in the future. Bech et al. Used the flower of money drawn by the Venn diagram to use four ellipses to divide the four key attributes of money: the issuer of the currency (issued by the central bank or other institutions), the shape of the currency (tangible or electronic) The universality of currency (general use or limited access), currency transfer (whether centralized or decentralized, point-to-point). It shows the logical relationship between different currency types and proposes the main attributes of the central bank digital currency (CBDC). In the figure above, the yellow boxes represent peer-to-peer payments, the blue boxes represent central bank issuances, the green boxes represent electronic forms, and red replaces general versatility. According to the Venn diagram, the intersection of two regions indicates that they have common elements (commonality). The retail CBDC is the only currency type in Figure 1 with four main attributes: central bank issuance (central bank liabilities), electronic form, and universal And peer-to-peer (decentralized) payments (cash-like). Wholesale CBDCs are not universal because they are only used for interbank settlement transfers. 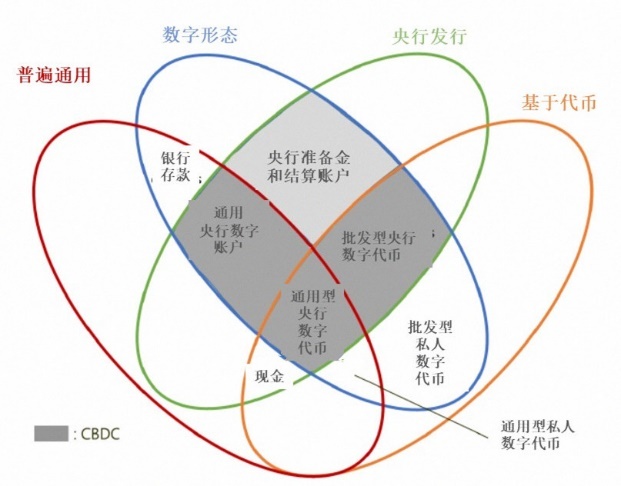 Since then, with the advancement of the research on digital currency of the central bank, I have gradually realized the disadvantages of DLT technology and blockchain in the application of currency payment and clearing. The "decentralized" technology of private cryptocurrencies such as Bitcoin cannot adapt to the digital currency of the central bank. In the application scenario, the recognition of the characteristics of the central bank's digital currency has also shown a tendency to maintain a technology-neutral path. Figure 2 is a modified currency model of Bech in 2018. The general-purpose (retail) CBDC still has 4 main attributes. The type of currency, and decentralized or centralized payment technology is no longer the main attribute of CBDC. Instead, token-based or account-based replacement is used as a monetary attribute, that is, verifying the currency or verifying the identity of the account holder during transactions. As an important measure to ensure the safety and integrity of the CBDC. The Swedish electronic krona solution has account-based and value-based (token) considerations. In addition, Bech et al. Also proposed some other important design features of CBDC, such as universality (created, issued and redeemed within 7 * 24 / day), anonymity, transfer mechanism (point-to-point / through third party), interest-bearing (counting Interest / non-interest-bearing, interest rates can be set to different levels), holding use limit, etc.

It has been more than two years since the creation and modification of the currency flower model. "The Chinese side has been in the hole for several days, and the world has been thousands of years". The development of CBDC has shown a rapid development trend. According to BIS, more than 60 central banks around the world are separated by one year The survey showed that about 40% of the central bank's research and development of CBDC has entered the stage of experimental or conceptual demonstration, and another 10% has entered the project pilot. Emerging market economies have shown stronger incentives and are more likely to issue CBDCs. Choosing which type of CBDC is more suitable for your own national conditions is a question that every country (region) that wants to issue will have to consider. International organizations have drafted some design and development guidelines, organized international experience sharing, and entered the important agendas of international organizations such as IMF, BIS, and WEF. The WEF has released a white paper, "The Central Bank's Digital Currency Decision Maker Toolkit", which provides a general framework for the design and issuance of different types of CBDCs by monetary authorities in various countries. In the latest quarterly issue, BIS announced the pyramid chart of the CBDC. Based on consumer needs, the retailer's design plan for the CBDC was determined.

Figure 3: Pyramid created by Auer and Böhme in 2020

"We use the 'CBDC Pyramid' graphic to represent the research methodology, which reflects consumer needs on the relevant design choices of the central bank. The plan forms a hierarchy where lower-level design decisions are used as subsequent higher-level decisions Foundation. "(Auer and Böhme, 2020)

The left side of the pyramid chart lists consumer demand for retail CBDC and related features, and the right side is the choice of CBDC design solutions based on these needs and features.

Retail CBDCs should first be as safe and easy to use as cash, otherwise consumers can choose other alternative payment schemes. For this demand, what kind of structure does the CBDC design need to solve? Is it a direct, indirect, or hybrid CBDC, that is, whether the CBDC is a direct or indirect liability of the central bank, or as a direct liability of the central bank, but it is handled by the private sector. KYC and retail business combined. The article by Auer et al. Analyzed the pros and cons of the three CBDCs, stating:

"Compared with direct or indirect CBDC architectures, hybrid CBDC architectures have both advantages and disadvantages. As an intermediate solution, it may be more flexible than indirect CBDCs, but at the cost of increased central bank operating infrastructure difficulties. On the other hand , … Because the central bank does not directly interact with retail users, it can focus on a limited number of core processes, while intermediaries are responsible for other services, including instant payment confirmation. "

The second layer is that consumers need a retail CBDC system that is flexible and robust, that is, to prevent technical problems such as network attacks and system failures. The corresponding choice is traditional centralized control or DLT technology. Its efficiency and single point The degree of protection of faults varies. It is important that the technical route selection is based on the infrastructure. If you choose a direct CBDC, it is not suitable to apply DLT technology:

"Current DLT cannot be used for direct CBDC, except in very small jurisdictions, because data throughput can be large. However, DLT can be used for indirect CBDC architectures, as many wholesale payment systems have a number of transactions that are comparable to existing districts. The number of transactions on the blockchain platform is comparable. "

The third and fourth tiers are consumers' requirements for privacy protection and universality of the CBDC. They must meet the information protection requirements of consumers holding the use of CBDC, and meet the requirements of laws and regulations on customer notification and anti-money laundering. . There are two options: account-based and token-based. The former needs to directly verify the identity of the holder. In some countries or regions, there may be insufficient universality. The latter is to indirectly verify the holder by verifying the authenticity of the CBDC. Identity (the holder should pass different degrees of identity verification before acquiring a CBDC to be able to hold a wallet, etc.), has relatively large versatility, but there is the possibility of lost funds and poor anti-money laundering compliance.

From the flower of money to the CBDC pyramid, BIS claims to be a "pioneer of central banks' response to digital innovation" and strives to adapt to this constantly and rapidly changing world. It does not want to lose its leadership position in the international payment industry. It is true, but whether it is really open Embracing the arrival of CBDC, but not necessarily. BIS President Carsten said in the latest BIS quarterly report: "An important issue in the work of the (BIS) BIS Innovation Center is whether the currency itself needs to be redesigned or whether the focus should be on improving the provision and use of currency. In terms of methods. "It reflects that BIS is more inclined to improve the international monetary and financial system than to reform. The decentralized approach that CBDC may adopt has brought a shock to the traditional central bank's business model, and it is bound to affect the existence of BIS as a "central bank of the central bank". Therefore, it must strive to grasp the direction and development path of international CBDC R & D. From the end of last year to this year, through the establishment of an innovation center and the establishment of a CBDC R & D team with six central banks, etc., they have established their leadership in the international research and development of CBDC. Like the currency flower model, the CBDC pyramid does not have much innovative exploration in theory. It is a summary of the current R & D practices of central bank CBDCs. Based on this, a corresponding logical relationship is established between the requirements of the CBDC and the design features. Some of the ideas and methods proposed, such as determining design characteristics based on requirements, balancing technology choices with CBDC governance, etc., have certain guiding significance for the research and development of most central banks at an early stage. Coin Research Institute Report: XRP is the "best diversified" digital asset, diversifying investment in altcoin or not a security strategy

Member of the Party Group of Fuzhou Municipal People's Government: Building the Intelligent Center of Digital Fuzhou and the New Engine of Digital Economy Development

Cardano founder: cryptocurrency is a powerful match against currencies such as the euro and the dollar