Abstract: As a token of a peer-to-peer currency system, Bitcoin has the attributes of both risk assets and hedging assets: in the early days, similar company shares played a role in stimulating community or project construction; currently it has certain hedging attributes, but the market The fluctuations are like stocks and are affected by the ecological development of their own projects. For a short period of time, Bitcoin fluctuates within a range, and Ethereum is converging, and it may change. 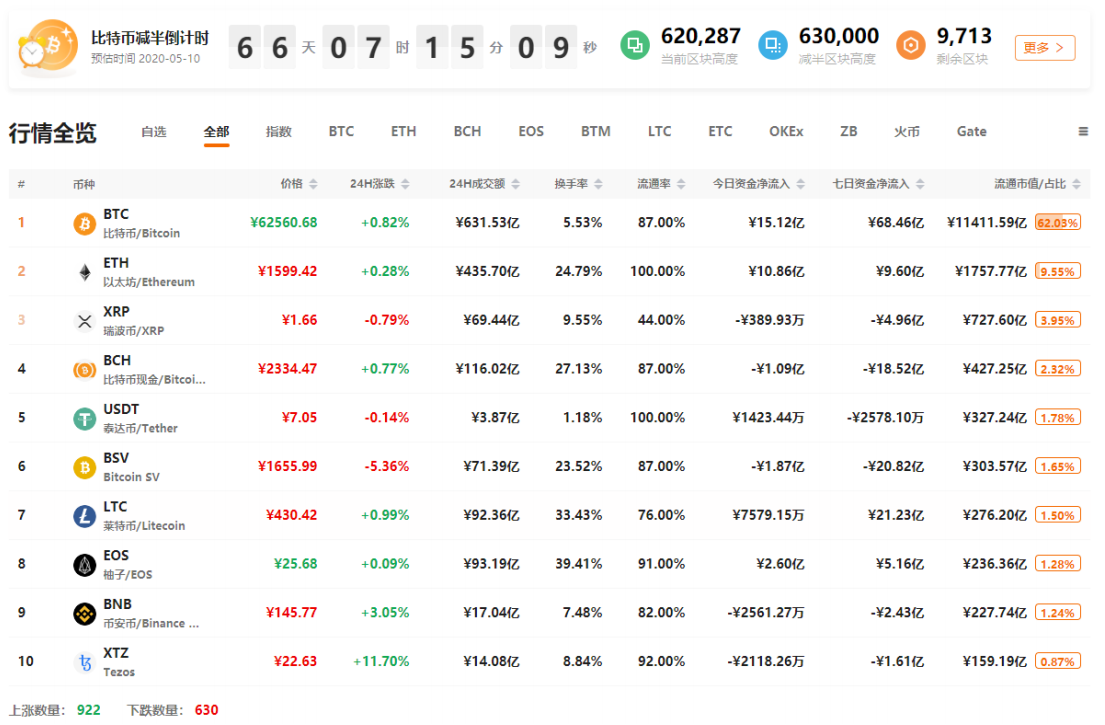 The definitions of safe-haven assets and risk assets are relative. Generally, a class of assets with relatively small market prices is called safe-haven assets, such as gold, the US dollar, the Japanese yen, and government bonds of some major economies. And stocks and financial derivatives usually have large price fluctuations and are usually considered risky assets. According to BuyBitcoinWorldWide, in terms of the U.S. dollar price (the actual purchasing power of the U.S. dollar is declining), the 30-day volatility of the yen, yuan, gold, and bitcoin is generally 0.3% -0.5%, 0.2% -0.4%, 0.5% -1%, 3% -6%. That is, from the perspective of market price performance, Bitcoin is still far from the definition of safe-haven assets.

Bitcoin is essentially a token of a decentralized currency system and has some of the characteristics of stocks and gold. In the early days of Bitcoin development, it was just a community project maintained by a small number of people. Tokens played a role similar to company equity financing and equity incentives: supporting project development and motivating early participants. Gradually, with the development of Bitcoin's payment scenario, trading market, and project ecology, more and more people around the world accepted Bitcoin, and Bitcoin has evolved into a risk asset based on open source code and global consensus.

For more than a decade, Bitcoin's market value has continued to rise and price volatility has continued to decline. At present, the market value of Bitcoin is as high as 11400 trillion yuan, and the volume is close to 2% of the market value of gold. Although Bitcoin still has strong speculative attributes, this does not prevent Bitcoin from being considered as digital gold, because Bitcoin and gold have many similar characteristics, especially the anti-inflation hedging attribute, or in some extreme cases As a safe haven. Historically, the Cyprus crisis, the abolition of large banknotes in India, and the severe inflation in Nigeria. The changes in the Google trend of Bitcoin and the apparent price premium in these regions are all manifestations of seeking Bitcoin as a safe haven in the region.

For many people in the world, Bitcoin is still an unknown thing, mainly because Bitcoin is far from their actual lives. On the one hand, because the infrastructure related to bitcoin payment or use is not sound, and there are still many functions that need to be improved in technology development; on the other hand, the attitudes of countries around the world to bitcoin have also limited the use of bitcoin. There is a competitive disadvantage in alternative payment instruments. However, as a hedging tool, Bitcoin can make up for some of the shortcomings of gold, such as lower inflation, portability, and near-infinite severability. As the saying goes, "buy gold in troubled times", for ordinary investors, at least one more choice. 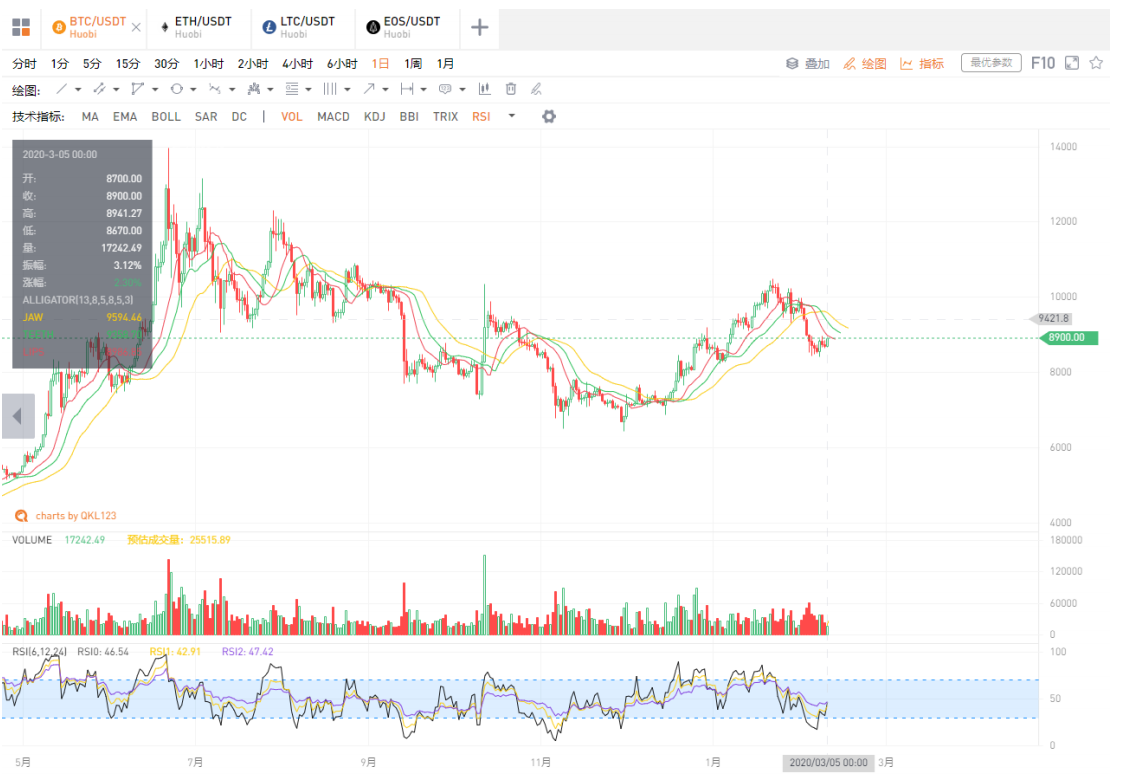 BTC went from US $ 8,600 to US $ 8,900 again, the volume could shrink relatively, and the long and short positions remained deadlocked. From the four-hour K line, the RSI departs from the oversold range, the crocodile indicator has a tendency to narrow, and the market has gradually stabilized, but the short-term shock may continue.

Recently, the trend of ETH has converged in a triangle. Although the move is similar to the high point in mid-February, it is less likely that the main force will play again after receiving chips at this position, and it is more likely to change upwards in a short time. .

LTC and ETH move similarly. The 4-hour K-line crocodile indicator is closed to eat, and the long and short are exhausted. It may change in a short time. 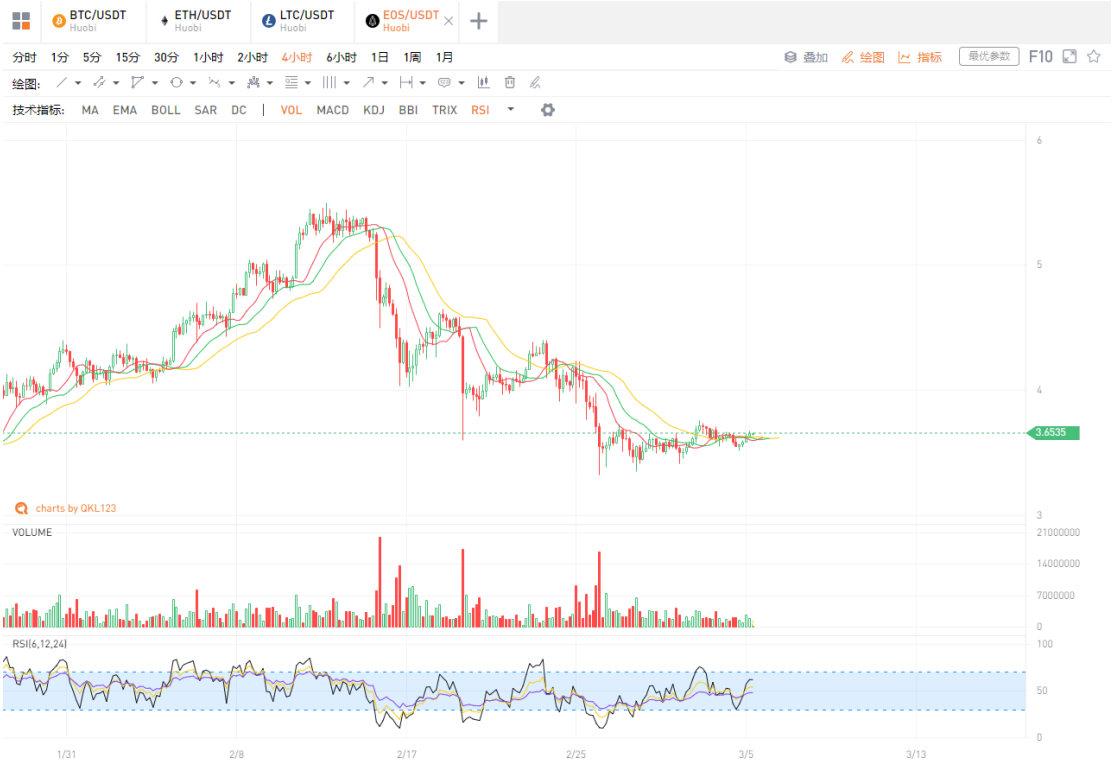 EOS linked with BTC may continue to explore today. If it breaks through the previous few days' highs, it can be used as a starting signal for the broader market.

There may be a short-term change in the market. Small positions attract low and sell high.

Ripple CEO: The cooperation with MoneyGram will have a far-reaching impact on the encryption market than Libra