The epidemic of the new crown virus that is spreading across the world affects the global economy. Even the most robust and stable US stocks have continued to fall, creating the largest weekly decline since the financial crisis.

On March 3, the Fed announced an emergency cut of 50 basis points, reducing the target range of the Federal Reserve Fund's interest rate to 1% -1.25%. Chairman Powell said the rate cut was to help the US economy remain strong. The Fed took action because it felt the economic outlook was at risk due to the outbreak.

Maybe people who do n’t play U.S. stocks will think that all of this is far from themselves, but in fact, as written by Liu Cixin ’s science fiction novel, “At first, no one cared about this disaster. The extinction of a species, the disappearance of a city, until this disaster is related to everyone. "

With the development of the global epidemic, even President Trump did not dare to declare it "under control", then which inflection point will the global economy take? US stocks, gold, US Treasury bonds, BTC, how do ordinary people need to allocate investment?

From the perspective of risk, we can roughly divide assets into three types: risk assets, hedging assets and risk-free assets.

According to the MBA think tank's interpretation, risk assets: assets that have the ability to earn in the future, such as dividends on stocks, and interest on bonds. But the future returns of risky assets are uncertain.

Safe-haven assets: refers to a class of relatively stable assets that will not fluctuate too much in price as the market changes, such as gold and the US dollar. Common safe-haven assets are the US dollar, gold, and the often overlooked Swiss franc and yen.

Risk-free assets: Assets that have no uncertain future returns. Its standard deviation is 0, and the actual rate of return will always equal the expected rate of return. Strictly speaking, absolutely risk-free assets do not exist, so they are not in the scope of our main discussion today.

Differentiating which investment targets belong to risk assets and which are safe-haven assets is of great help to our investment allocation. It is also very important to judge the correlation between asset ups and downs.

For the next analysis, we first need to distinguish the difference between asset attributes and currency attributes:

Fundamentally speaking, U.S. stocks and U.S. Treasuries are assets, and resources controlled by enterprises or individuals during the transaction process are an obvious economic benefit.

Gold and BTC were initially positioned as currencies. They mainly exchanged money. Payments had monetary attributes. Later, both of them turned into investment assets with more asset attributes.

Then U.S. stocks, gold, U.S. Treasury bonds, and BTC are all assets. Which of them are risk assets and which are safe-haven assets? 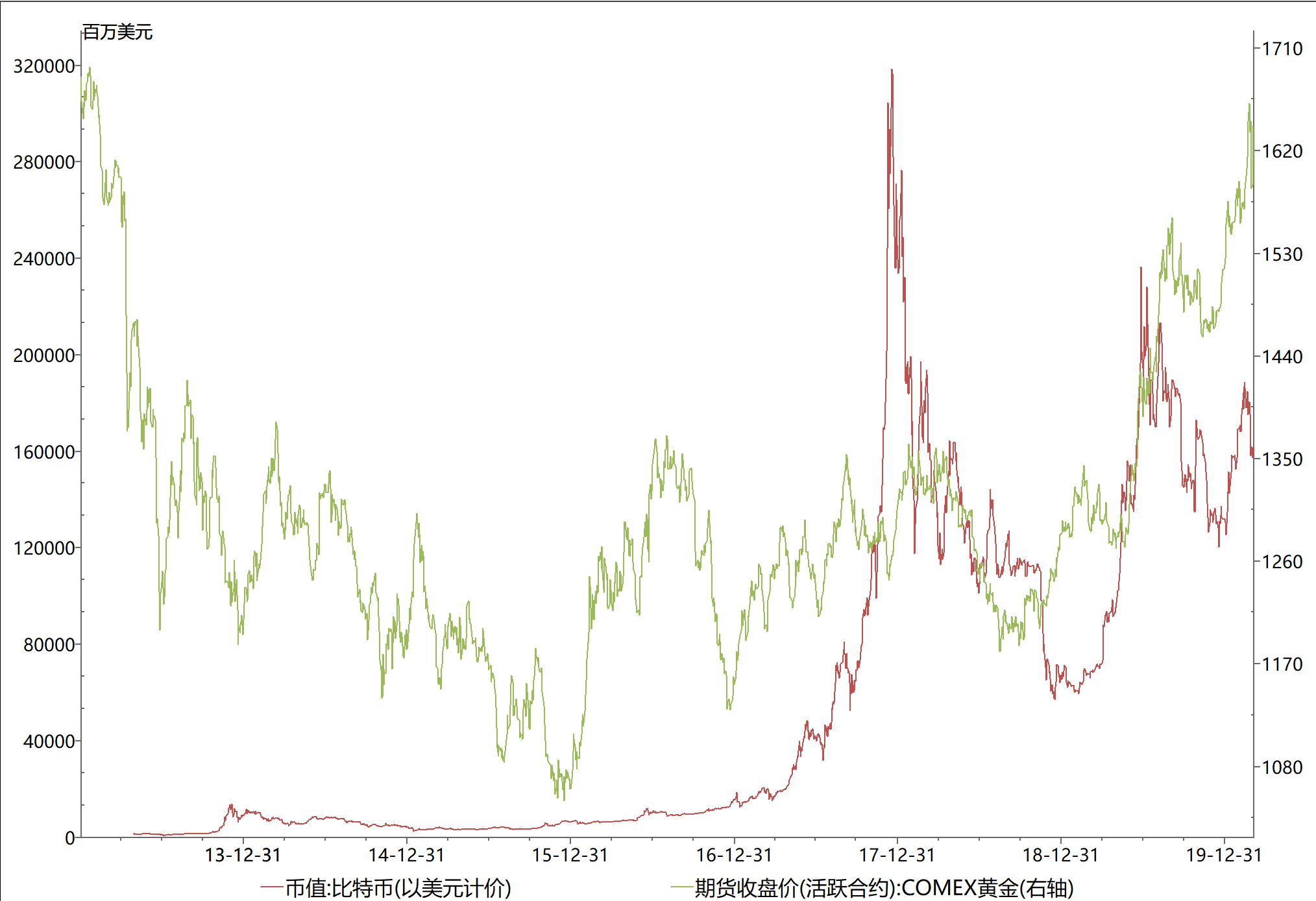 This is the rise and fall of gold and bitcoin from 2013 to 2020. It can be seen that the early bitcoin price fluctuations were very large, and there was no correlation with more stable safe-haven assets such as gold. 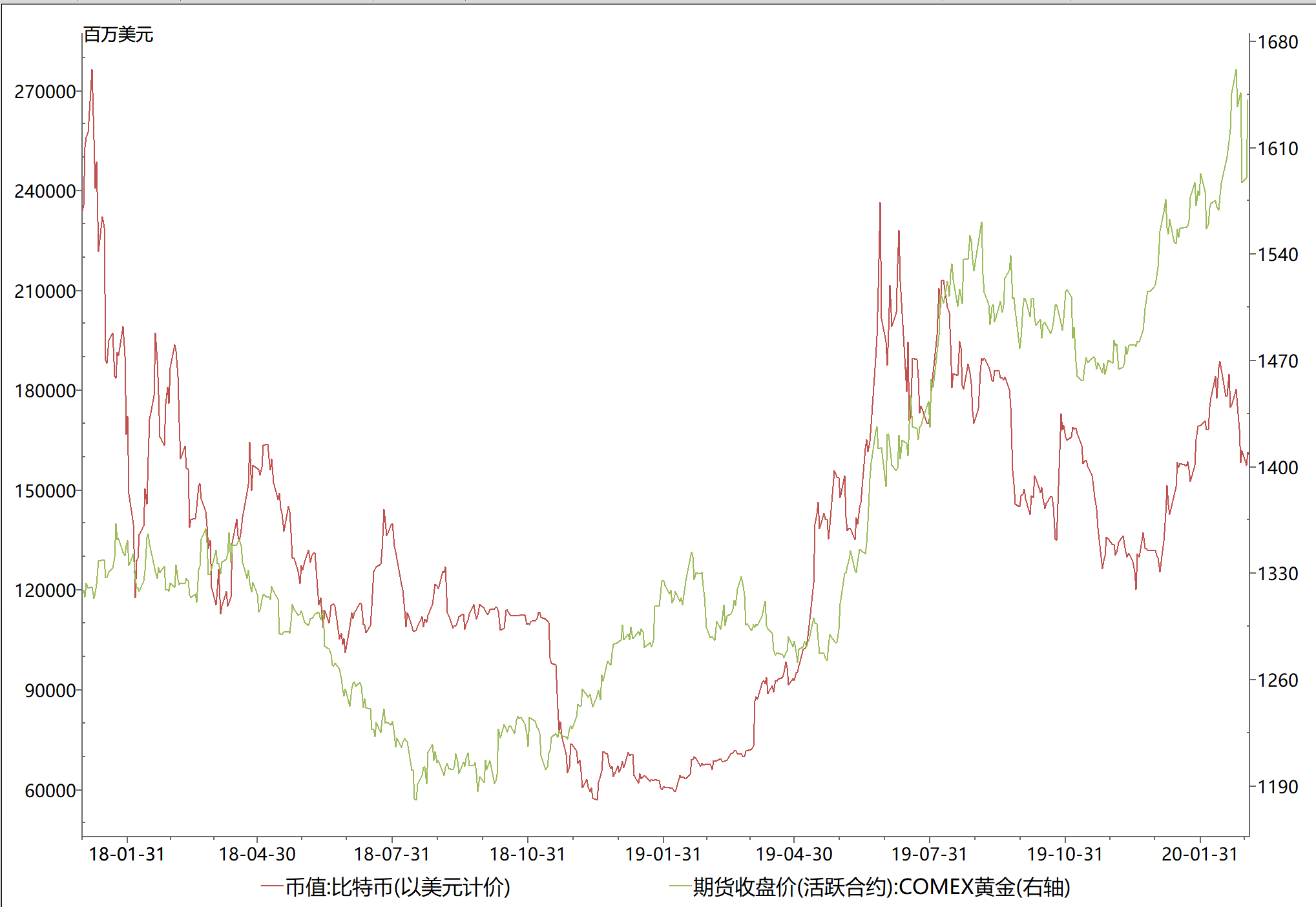 Recently, BTC and gold have fallen at the same time. It can be speculated that global panic has intensified. Both gold and bitcoin are not as demanding as cash flow, and everyone withdrew funds.

In general, the rise and fall trend of the same type of assets is positively correlated, and the trend of risk assets and hedging assets is negatively correlated. It can basically be judged that early BTC is a risky asset class, but currently BTC may During the transition period of the transformation of insurance assets, the proportion of risk attributes> hedging attributes.

Some people may say that bitcoin has the same risk asset properties as U.S. stocks. Does it rise when U.S. stocks rise? We need to analyze this further. 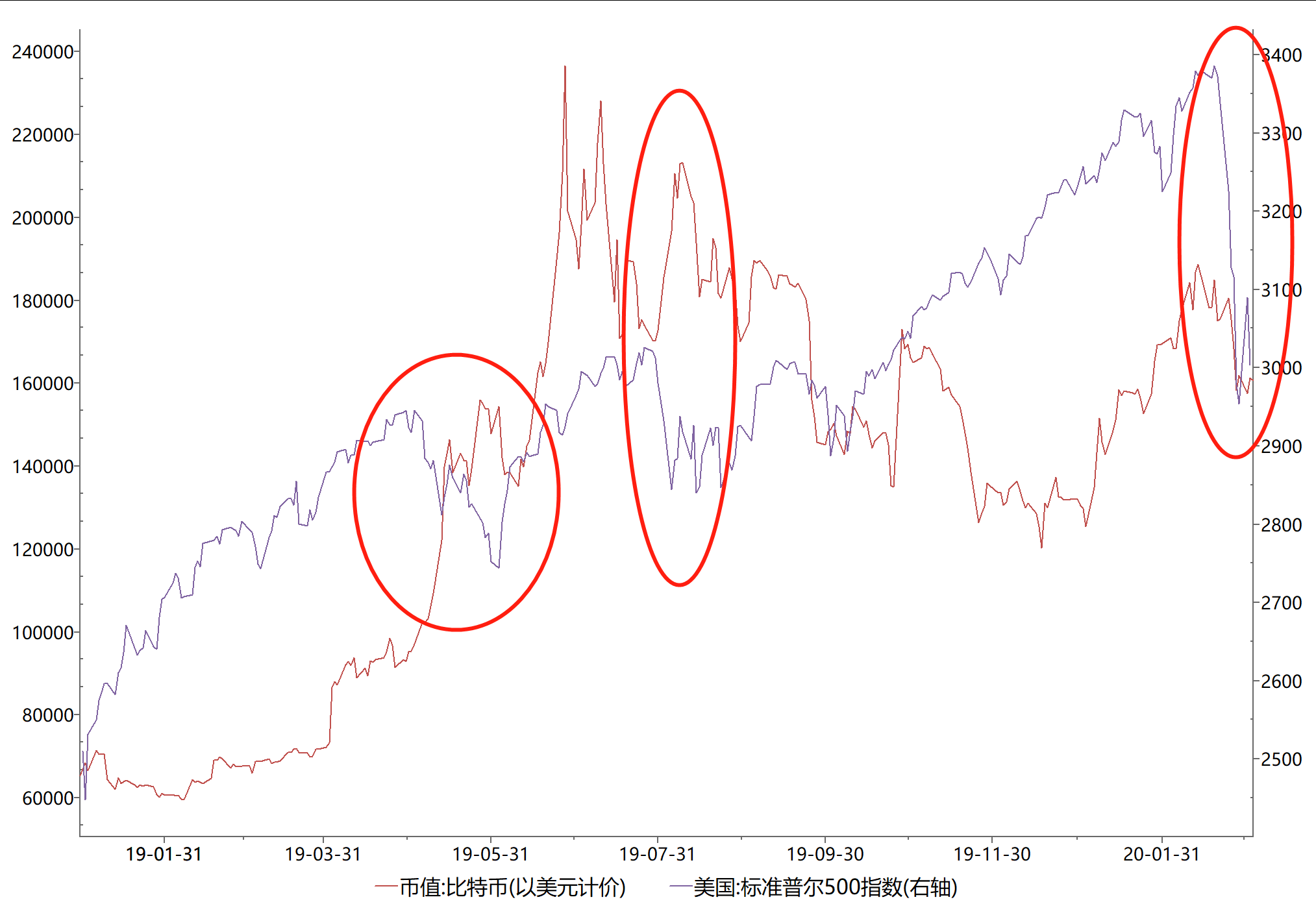 The megatrends are up, indicating that both types of risky assets have performed strongly during the year, with good returns. But if you look closely at the April-June 19 and July-August 19 (the first two red circle areas in the picture), Bitcoin has a negative correlation with the rise and fall of US stocks, not to say that the same type of assets Should the trend be positively correlated?

The reason is that although they are the same type of asset, the influencing factors between the targets are not related.

From this perspective, objective analysis shows that there is no obvious correlation between US stocks and Bitcoin, and the factors that determine them are very different.

But sometimes it seems to be relevant. For example, from January 2020 in the picture above (the third red circle area), U.S. stocks and Bitcoin have fallen almost at the same time. It is speculated that this is due to the panic caused by the epidemic. And for risky assets like US stocks, both are negative news, so both fell at the same time.

The conclusion is that although Bitcoin and US stocks are risky assets, there is no correlation between the underlying.

What about the correlation between Bitcoin and gold?

The main influencing factors of gold: the actual interest rate of the global economy, market panic, the trend of the US dollar, war and political shocks, inflation, and the relationship between supply and demand of gold. 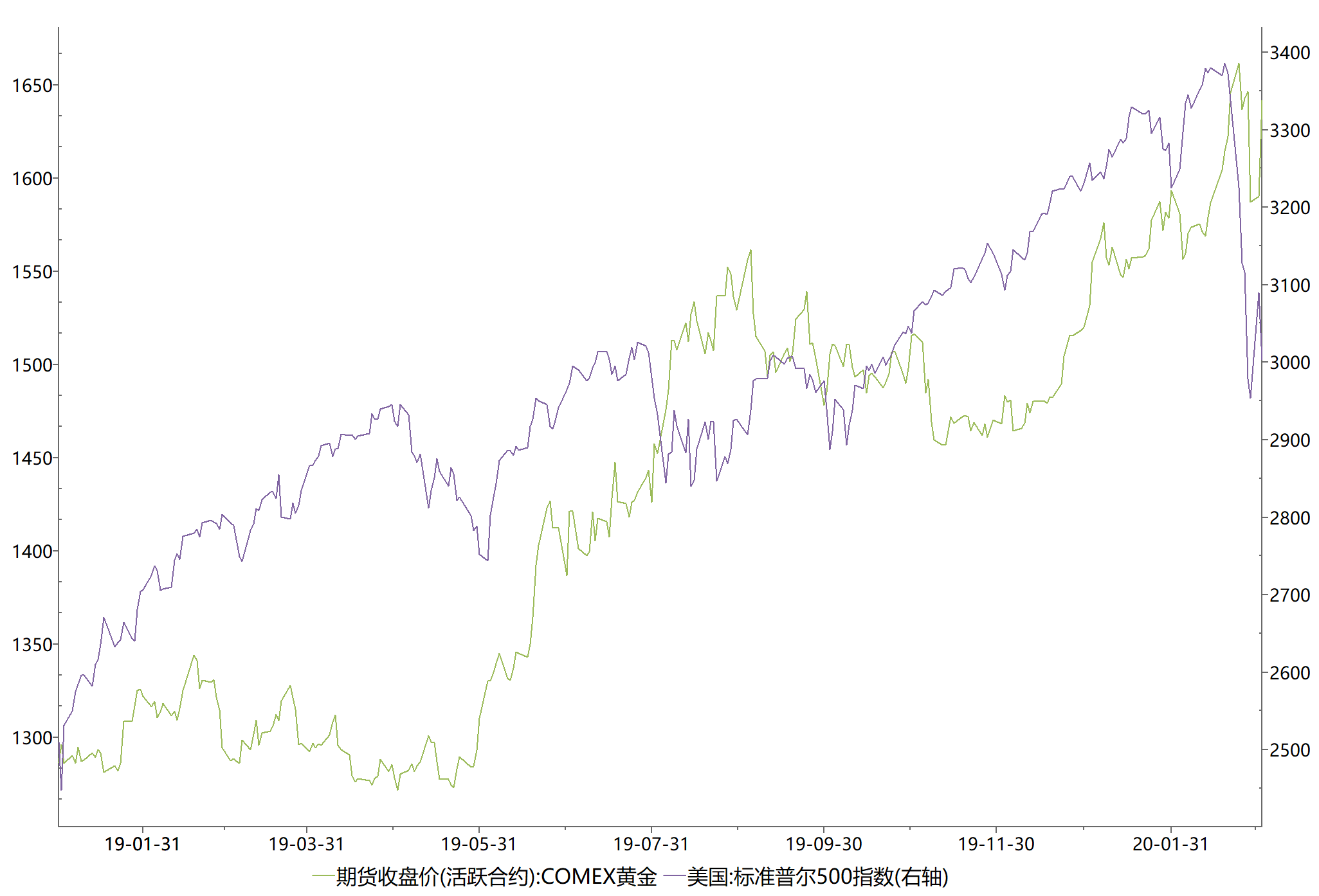 According to the comparison between the ups and downs of gold and U.S. stocks, we can see that the two lines almost show a symmetrical pattern. When U.S. stocks fall, it is often due to negative information that leads to increased panic and increased risk aversion, so gold goes up, but not Gold will rise when all US stocks fall. Here also during the epidemic, gold and U.S. stocks fell and rose almost in the same period. The main reason is that panic caused the withdrawal of funds (or increased cash flow demand), and then rebounded, which is still a special case. 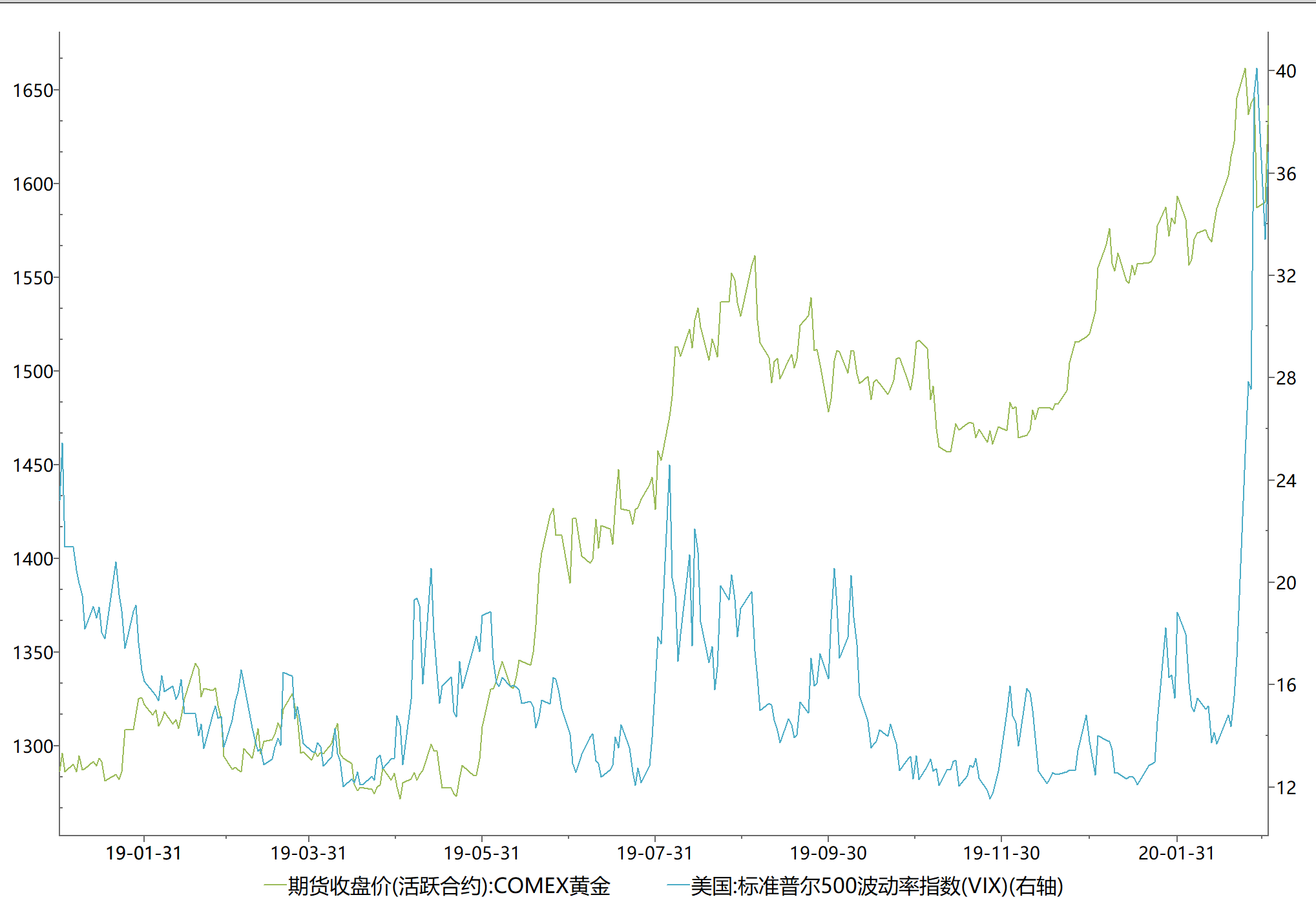 Let's look at the rise and fall of gold, which is also a safe-haven asset, and U.S. Treasury bonds: 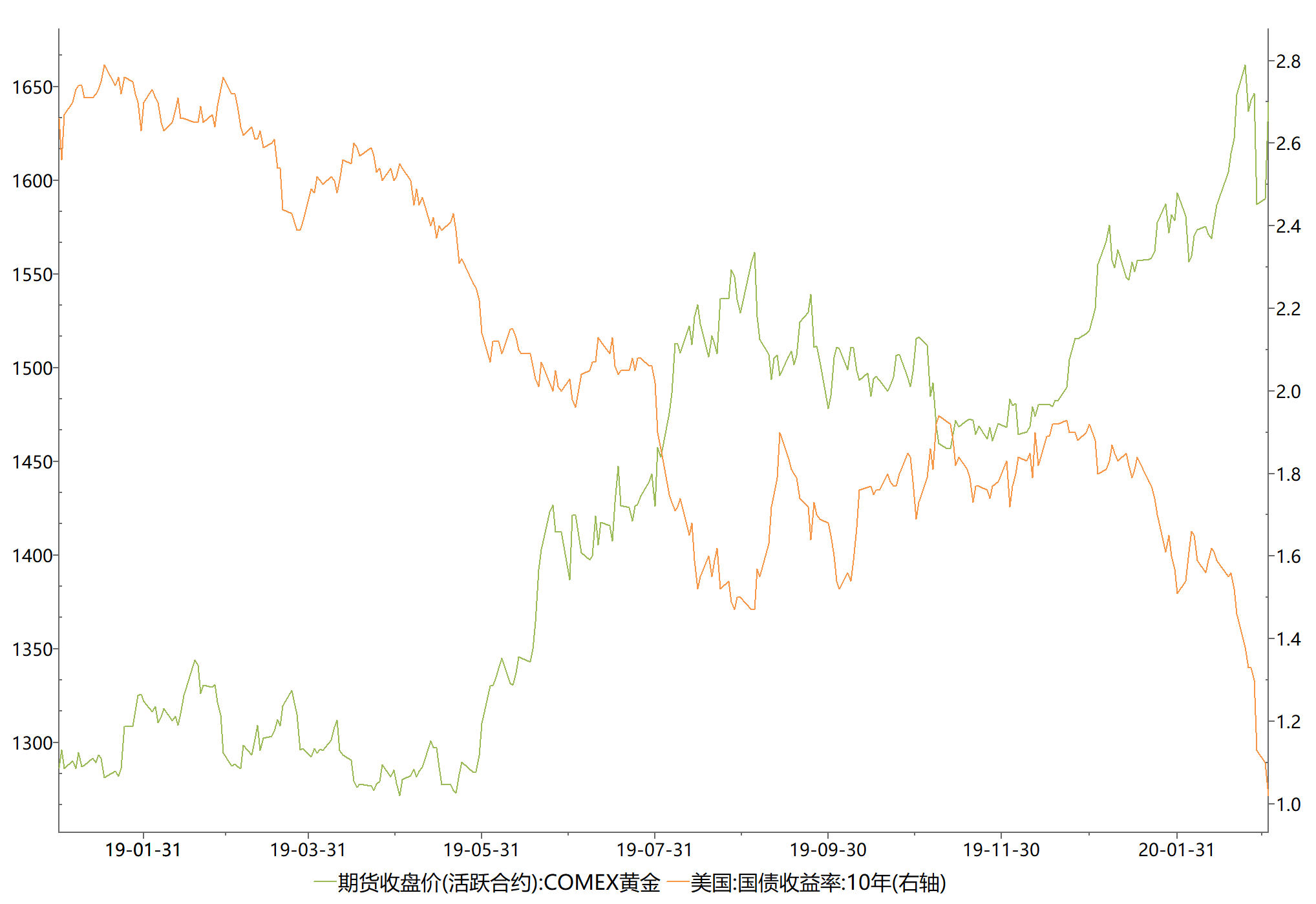 Earlier we mentioned that the same type of assets, the trend of ups and downs is positively correlated, and risky assets and negatively hedged assets are negatively correlated. However, there is an important supplement here. Most of the time, it is not a single factor that affects the market, and different factors have different results for each investment target. For example, the trend of the US dollar will affect both US stocks and gold, but the weight of this influencing factor may be different in the two targets; the epidemic factor has a greater weight in all assets, but the results and degree of each asset It's different …

Therefore, when analyzing the correlation between the rise and fall of U.S. stocks, gold, U.S. Treasuries, and BTC, the following prerequisites need to be noted:

1. Each subject has its own influencing factors;

2. The same influencing factors have different effects in different periods.

Now the market panic is more serious, bitcoin fell, US stocks fell, gold rose, and US Treasury bonds rose. If panic continues to rise, gold is likely to rise in the long run. Only after the epidemic situation is resolved can we tend to buy risky assets, while the prices of risk-averse assets may fall.

The main risks are the uncertain development of the new crown pneumonia epidemic and the looser global monetary policy than market expectations. Investing in any kind of asset requires careful consideration of many factors, and you should not make decisions based on a single indicator.

The macro data may be more complicated. If investors are only interested in Bitcoin or other cryptocurrencies, it is recommended to pay more attention to the linkage between Bitcoin and 2020 halving currency , which may be more targeted at grasping investment opportunities:

Co-founder of the Litecoin Foundation: Most Bitcoin buyers have a bachelor's degree, and a large portion have a master's degree