China's banking industry has landed dozens of blockchain applications, who is providing technology for financial giants

The combination of banking and blockchain is on the fast track.

In terms of size and influence in the financial sector, banks are big brothers. Mutual Chain Pulse has sorted out nearly 30 blockchain projects of more than 20 banking institutions such as state-owned commercial banks, professional banks, joint-stock commercial banks, and found blockchain technology service providers for these projects.

The reason why blockchain can be favored by banking institutions is because it can solve the two key problems of reducing costs and improving efficiency in the industry.

For example, banks have previously consumed a lot of human and financial resources to maintain the capital database, and the management of distributed accounting and collective maintenance through blockchain technology can effectively reduce the cost of database maintenance. For example, in cross-border payment scenarios, point-to-point through blockchain technology This method can facilitate the rapid completion of cross-border payment settlement between the two parties, while improving efficiency and ensuring the security of transactions.

In addition, the blockchain also has a certain effect in terms of supervision. Putting user information and transaction records on the chain can effectively help banks carry out supervision and reduce risks such as fraud and money laundering. 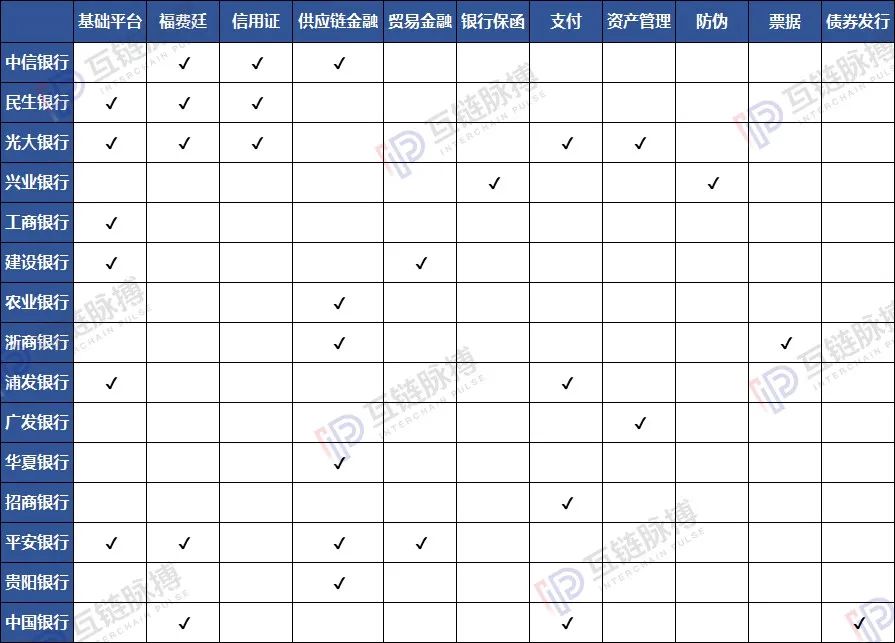 In addition to basic platforms and supply chain finance, banks also attach importance to the combination of blockchain and payment services.

Technical supporters: Native blockchain companies account for most of the cloud, and FunChain takes the lead

At present, banks use and develop blockchains in multiple business fields, some of which are based on their own technical teams and platforms, but rely more on the support of professional technology companies.

Mutual chain pulse statistics The technical supporters of the above-mentioned banks' vigorously developed projects show that the current development of blockchain business by banks is different from other major industries that rely mainly on BAT and other major manufacturers. The main technical service providers of the bank's blockchain project are native blockchain enterprises such as Cloud Elephant, FunChain, and Bobby.

This is because financial institutions develop blockchain business, which not only has extremely high requirements on system performance, security, operation and maintenance in terms of technology, but also requires enterprises to have certain financial system R & D and implementation capabilities.

"In terms of technology, the bank's blockchain project requires higher availability, especially operability, such as fault recovery in the shortest time possible through a high-availability architecture; system exceptions and exception operations are eliminated through system monitoring and privileged operations. So this poses greater challenges to the R & D, implementation, operation and maintenance capabilities of the blockchain technology service providers. "Those in the industry who participated in the bank's blockchain project have introduced the pulse to each other. Not only that, in the financial field, such as privacy protection and security, it is required to support national secrets, data isolation, etc .; in terms of operation and maintenance, it supports automatic operation and maintenance, and in addition, it requires support for node failure recovery in milliseconds. Projects in the non-financial field will not have special requirements for the above, and relatively focus only on system stability.

Based on this, native blockchain enterprises have become the main technical supporters of banks.

At the same time, as a blockchain enterprise, its main business is to provide blockchain solutions for enterprises and government agencies to meet the commercial needs of enterprise applications in such aspects as performance, security, privacy, reliability, operation and maintenance. Compared with other types of companies, native blockchain companies have more enterprise resources to fully support banks and meet their technical and business requirements.

According to statistical data, the dimensions of the number of service banks and the number of projects providing technical support are compared. Among the native enterprises that banks rely on, Cloud Elephant Blockchain and FunChain Technology are at the forefront.

And these two blockchain technology companies, in addition to the basic platform field, have served several banking institutions respectively. In the remaining business areas, no direct competitive relationship is currently formed.

The services provided by Yunxiang Blockchain for the banking industry are mainly concentrated in Forfaiting and Letter of Credit. 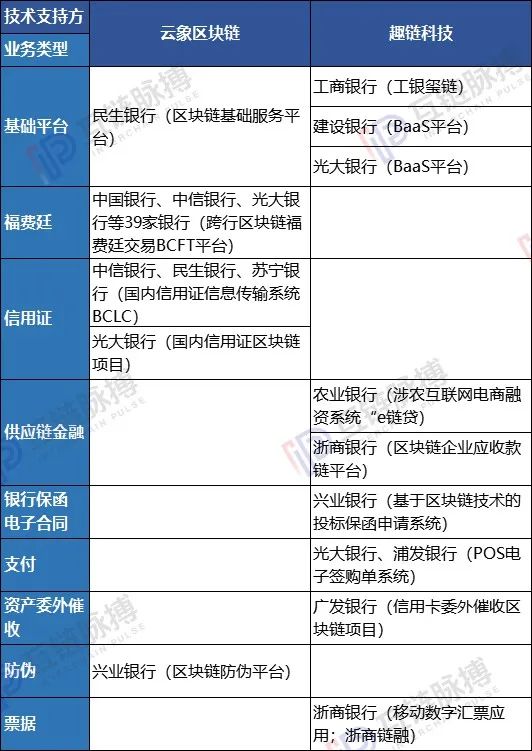 Before the launch of this platform, CITIC Bank, Bank of China, and Minsheng Bank also launched the Domestic Letter of Credit Information Transmission System (BCLC) in 2017, which is also technically supported by Yunxiang. It is reported that the blockchain platforms under the two business scenarios of Forfaiting and Letter of Credit belong to the blockchain trade financing platform jointly developed by these three banks.

In addition, the mutual chain pulse is concerned that in October 2019, Everbright Bank, which is the core node of the blockchain Forfaiting Trading Platform (BCFT), is also in the field of letter of credit. But instead of participating in the domestic letter of credit information transmission system (BCLC), in July 2019, based on the technical support of the Yunxiang blockchain, the development of the "Domestic Letter of Credit Blockchain Project" began. 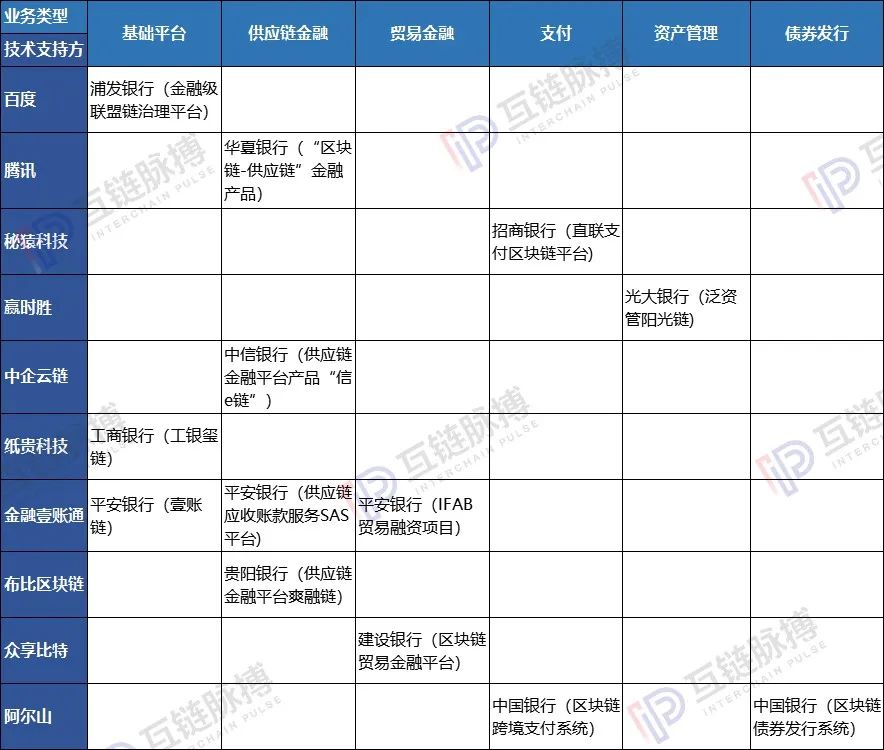 In addition, Aershan helped Bank of China launch two systems of blockchain cross-border payment and blockchain bond issuance; Ping An of China is based on an independently developed one-account chain, which has been launched in the areas of supply chain finance and trade finance. The supply chain accounts receivable service (SAS) platform and the IFAB trade financing project were introduced.

In fact, by looking at the bank's business layout and its project technical supporters, you can learn from the side the most active banking institutions in the blockchain field.

According to incomplete statistics of the inter-chain pulse, the current layout of China Everbright Bank is more extensive. It has six blockchain projects distributed in the fields of basic platform construction, forfaiting, letter of credit, payment, and asset management. Except for asset management, the launch of the blockchain-based ubiquitous capital management Sunshine Chain was co-sponsored by IT financial service provider Wintime Win. The other projects of China Everbright Bank are made by Yunxiang Blockchain and FunChain. Technology provides technical support.

Ping An Bank currently has 4 financial industry blockchain applications, and most of them are based on the one-account chain independently developed by the group's brother units.

According to industry sources, ICBC is also based on its own technology and is conducting a blockchain layout.

In terms of the number of applications, China Everbright Bank, Ping An Bank and other joint-stock commercial banks are relatively leading. If viewed from the time dimension, Postal Savings Bank and Minsheng Bank were the earliest. In 2016, they launched a blockchain custody business system and a blockchain underlying platform. In 2017, more joint-stock commercial banks were promoting application development.

Podcast host Trace Mayer: Bitcoin will reach $21,000 at the end of the year 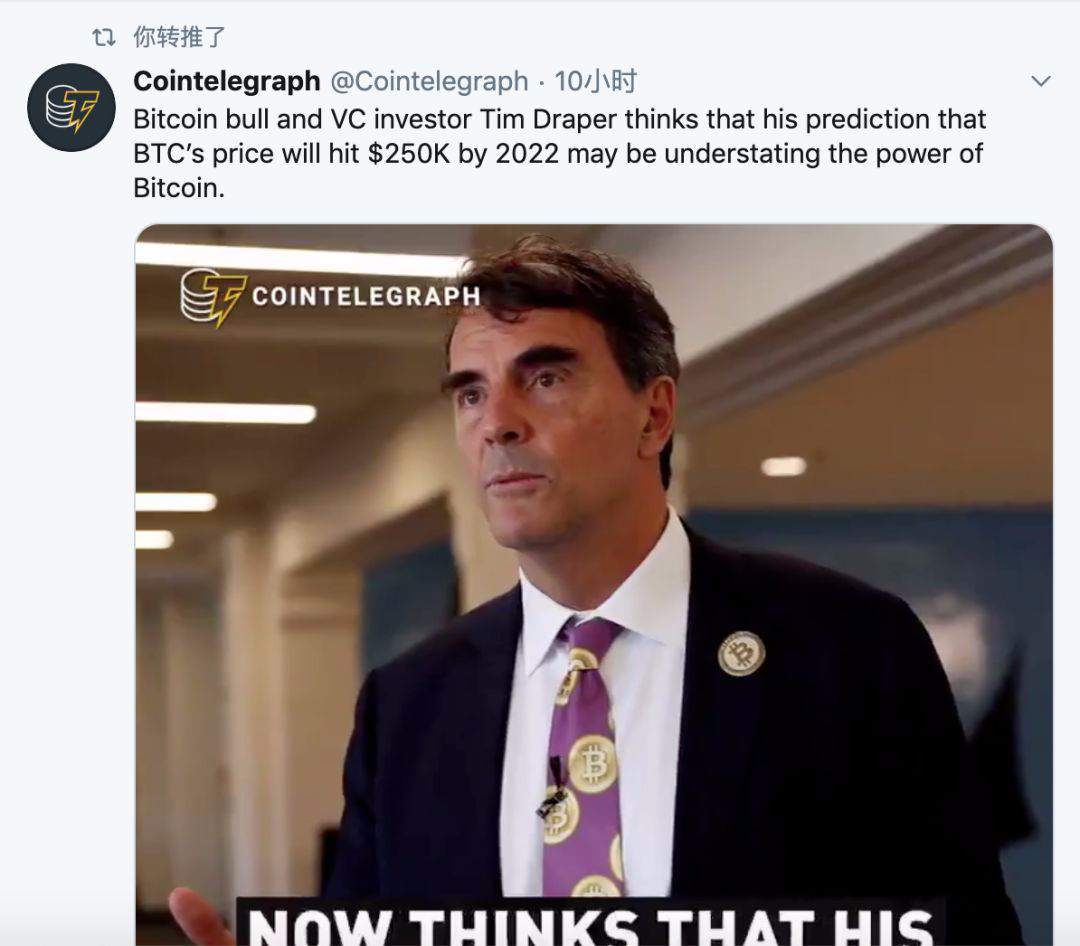