BitUniverse data shows that in the past 48 hours, the crypto market has been hit hard, and the entire market has plummeted.

Bitcoin dived high, and once fell to US $ 7,837 during the session, with a maximum drop of 14.6% in 48 hours. "Bitcoin's fall" also topped the Weibo search today. The mainstream currencies, including ETH and BCH, experienced a maximum decline of more than 20% in 48 hours.

Coin Coin data shows that the entire network has sold out more than 500 million U.S. dollars in the past 24 hours, and more than 36,000 investors have become "victims" of selling out.

The "halving market" that had been highly anticipated before was also ridiculed: the original halving market refers to halving prices and halving assets.

Market resumption: Bitcoin's biggest one-day drop in half a year

Throughout the day, the price of Bitcoin has been consolidating around $ 8,700. However, starting at 20 o'clock, the market turned sharply, and once within four hours, it fell below the important support level of $ 8,400. In the end, Bitcoin closed down 7.84% on the day, the biggest one-day drop in nearly half a year (since September 25, 2019).

In the investment group, some investors shouted: Bitcoin is backing up to pick us up, leverage stud, and it will not fall any more.

However, the downtrend has not stopped there.

BitUniverse data shows that at 7 am Beijing time today, Bitcoin dropped to the $ 8,000 mark, and the three major exchanges have all maintained this important mark. But at 12 noon today, Bitcoin fell again, falling below the $ 8,000 mark. As of press time, as of press time, the Bitcoin price was temporarily reported at $ 7,889, with a maximum drop of 14.5% in 48 hours.

The weakening of Bitcoin has also driven down other cryptocurrencies. In the past 48 hours, the mainstream currencies, led by ETH and BCH, have fallen by around 20%.

Since the decline of Bitcoin on February 13, so far, Bitcoin has fallen by 25% in the past month, and only 12% of this year's cumulative earnings remain. Earnings of other mainstream currencies are also not optimistic this year. Prior to the strong "half and three silly", only BSV still maintained a yield of 103%, and the revenue of ETC and BCH shrank sharply. 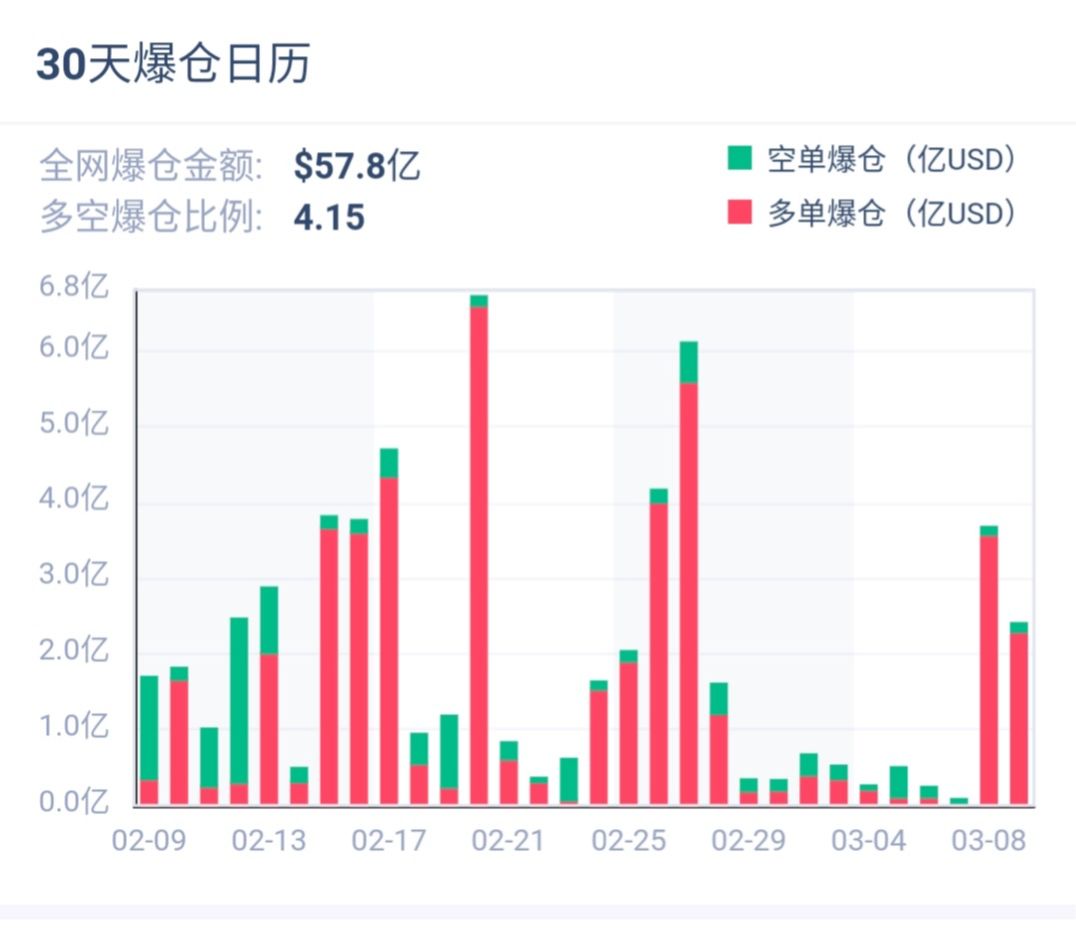 From the past 30 days, the total net short positions in the entire network have reached 5.78 billion US dollars, and the ratio of long and short positions has reached 4.15. The long losses have been severe.

Causes of the plunge: outbreaks,

With the market plummeting, all investors have a common question: Why did Bitcoin start falling again?

(1) Cause of message surface

Odaily Daily News combed and found that from the news, there are three possible causes: PlusToken sell-off funds, crude oil prices plummeted, and the global economic flooding under the influence of the epidemic.

Earlier this morning, cryptocurrency analyst ErgoBTC tweeted that the decline in BTC was due to the sale of Bitcoin by the PlusToken team. "In the past 24 hours, PlusToken has transferred approximately 13,000 bitcoins directly to mix services (for money laundering)." The so-called Bitcoin "hybrid service" refers to allowing users to mix their tokens with other tokens, thereby enhancing privacy and making blockchain browsers unable to track them. "Hybrid services" usually use exchanges without KYC certification. Users can exchange Bitcoins in their hands for other tokens and transfer them to different wallet addresses to avoid tracking. "Hybrid Services" are also considered illegal activities in connection with dark web transactions.

ErgoBTC's words are not groundless. In fact, as early as March 6, PeckShield issued a warning.

According to data from CoinHolmes, a digital asset visualization tracking platform owned by PeckShield, starting at 12 o'clock on March 6th, Beijing time, the funds on PlusToken's running funds 15Z1sT and 1CkuKa began to change again, and 13112 BTCs were scattered to several addresses by small cut In China, it may flow into the exchange later or sell through OTC OTC.

It now seems reasonable that PlusToken's sell-off of BTC caused the price to plummet. After all, in December 2019, they had sold 790,000 ETH, which caused the ETH price to severely fall.

Another possible factor is the plunge in crude oil prices.

According to the Associated Press, Saudi Arabia started an oil price war on Saturday. On the one hand, it announced price cuts, which drastically reduced the price of crude oil sold to markets such as Europe, the Far East, and the United States. The discount rate was the largest in more than 20 years. On the other hand, increasing crude oil output, Saudi Arabia privately informed market participants that it would increase if necessary Production even reached a record level of 12 million barrels per day (this month's output was 9.7 million barrels per day).

As soon as the news came out, crude oil futures suffered an "epic plummet." Brent crude oil futures fell sharply and opened lower this morning, with the opening price falling 25% to $ 34.52 / barrel; WTI crude oil fell more than 33% to $ 27.59 / barrel, a drop more than the largest drop in the 1991 Gulf War.

"If you look at BTC as an asset class, compared to global real estate, bonds, stocks, and commodities, it is the smallest asset, the most volatile, and the highest risk premium. Therefore, if there is a bit of trouble in the international community, it will affect It has an impact, especially the oil price war waged by Saudi Arabia last Saturday, which caused crude oil to plunge 30% at the start of the night.

BTC was first affected because of its highest level of risk premium attributes, and some panic selling is understandable. Li Zhe, a partner of Clipper Coin Capital and conflux community ambassador, told Odaily Planet Daily.

The last reason everyone felt recently was the release of water from the global economy under the influence of the new crown epidemic. Bitcoin has not been the "hedging" attribute that people have expected.

According to the World Health Organization, as of 17:00 Beijing time on the 8th, the number of countries and regions outside China affected by the new crown pneumonia epidemic has reached 101.

Under such circumstances, the global economy has been hit hard, and the market lacks incremental funds, and neither the stock market nor the currency market can be spared. As early as two weeks ago, U.S. stocks and European stocks suffered a panic plunge. The Dow even hit its largest one-day drop in two years on February 25. At 8 am Beijing time today, the US S & P 500 index futures plunged to 2819, triggering trading restrictions.

"Because of the global outbreak of new crown pneumonia, almost all asset classes, stock markets, bond markets, crude oil and even gold have plummeted. This is a very rare phenomenon, which may stem from the pessimistic expectation that the market will weaken demand due to the epidemic and then global deflation. BTC, as a risky asset, is also difficult to stand alone, "explains Lorry, industry research director at Amber Group.

dForce founder Yang Mindao said: Financial markets are all connected, and everyone is equal in the face of liquidity. In fact, digital currency assets such as bitcoin are more sensitive to liquidity, and the transmission path is very short.

Bitcoin should test the arguments of 2009 through the economic crisis, this time is a better opportunity. From observation, Bitcoin can avoid the risks and geopolitics of capital-controlled countries, but it is obviously powerless to face global liquidity risks.

At present, many digital currency hedge funds, positions and stock positions are fully linked. Under the current circumstances, the funds of US stocks will flow to cash and US debt.

This is the same as many people do n’t understand why Buffett has a long-term account of 20-40 billion U.S. dollars. The allocation of cash and U.S. debt is investment-oriented. The financial crisis revolves in 7-10 years, and can basically be 30 each time. The asset value of this part of cash can be calculated, and the annualized value of this part of cash should be about 8%. Adding the cash income, the total return is 10%.

In addition to the news, there are also many indicators on the technical side that indicate a plunge.

Odaily Planet Daily has reported that due to the strong sentiment before, the major exchanges USDT have an emergency situation. Things must be reversed, and short counterattacks are also reasonable.

"This round of halving the market is a leveraged bull. Persistently long and high rates. The spot USDT has been borrowed repeatedly. It has been said before that in the absence of incremental funds, it is impossible for most people in the stock game. Make a profit. "Lorry said.

BlockArc CEO Su Ye also agreed with this view, saying that this year is a typical leverage bull. "Everyone has 10,000 yuan in their pocket, and they buy it with 10 times the leverage of 100,000 yuan. The characteristic of leverage cattle is that it is consumed quickly. Once there is no incremental funds, it is easy to rise and fall quickly."

OKEx trading big data shows that BTC leverage ratio reached 32.9 at one time. After several days of decline, the current long / short ratio of BTC leverage has dropped to 5.59.

NewsBTC analyst Aayush Jindal believes that BTC has previously formed a bearish trend, with resistance at the $ 9,200 line, and the resistance level meets the 4-100 MA, putting greater pressure.

However, BTC's failure to break through the $ 9,200 and fall below the important support level of $ 8,700 has already signaled the coming of the plunge.

For panic investors, the most important concern at the moment is: Will there still be a bull market? When does the currency price rebound?

Li Zhe is very optimistic about this. He said: "The epidemic situation will end, and after the dispute, there will always be peaceful development. The downward return on the asset side will also continue to force the central banks of various countries to release water. The long-term optimistic pattern remains unchanged."

"I think the bull market will come after all. Breaking through $ 20,000 is only a matter of time and needs short-term adjustments." Suye is also optimistic about the market outlook. . "

He added that after the bull market, the necessary and sufficient conditions for attracting off-market incremental funds-a touching story. Bitcoin's ten-year story is over. This is the biggest crisis and a new story is needed. The next story may revolve around the DeFi golden age that started after Ethereum 2.0, or the global payment of digital currencies brought by Libra, DCEP, etc.

Lorry is relatively pessimistic. From a technical perspective, he believes that the probability of this round of halving the market has peaked. The next step is to consolidate and find out. "Whether there will be a bull market this year is still determined by BTC's long-term supply and demand relationship."

OKEx analyst Iwamatsu believes that because Saudi Arabia's crude oil extraction costs are significantly lower than other countries, we may see crude oil prices below $ 30 / barrel later, and Bitcoin may continue to fall.

He added that it is still necessary to continue to observe the subsequent trend of oil prices and whether its impact on multiple markets can be digested. "In the past few weeks, we have been able to clearly observe that the property of bitcoin as a risk asset has been emphasized by the market, and this property will continue in the short term. In the medium and long term, bitcoin as a non-interest-bearing asset will experience lower interest rates and lower holding costs. There may be returns in a reduced environment. In addition, there are fewer and fewer asset classes with still stable returns in the market, and many funds will pursue excess returns by tolerating greater risk. "

Finally, Yansong also gave some support and resistance levels for investors' reference: the strong support below is near $ 7,500, and the pressure level above is the 120-day moving average, which is $ 8,330.

Getting started with blockchain | Is lightning network without consensus mechanism guaranteed, is it really safe?