Abstract: The international oil price has suffered an epic slump due to the double bearishness, exacerbating the panic in the global capital market, the global stock index linkage fell, and Bitcoin has not been spared. Although Bitcoin is classified as a commodity, Bitcoin is relatively independent of oil and has its own cyclical changes. In the short term, Ethereum and other signs of stabilizing rebound may drive the market to rebound. 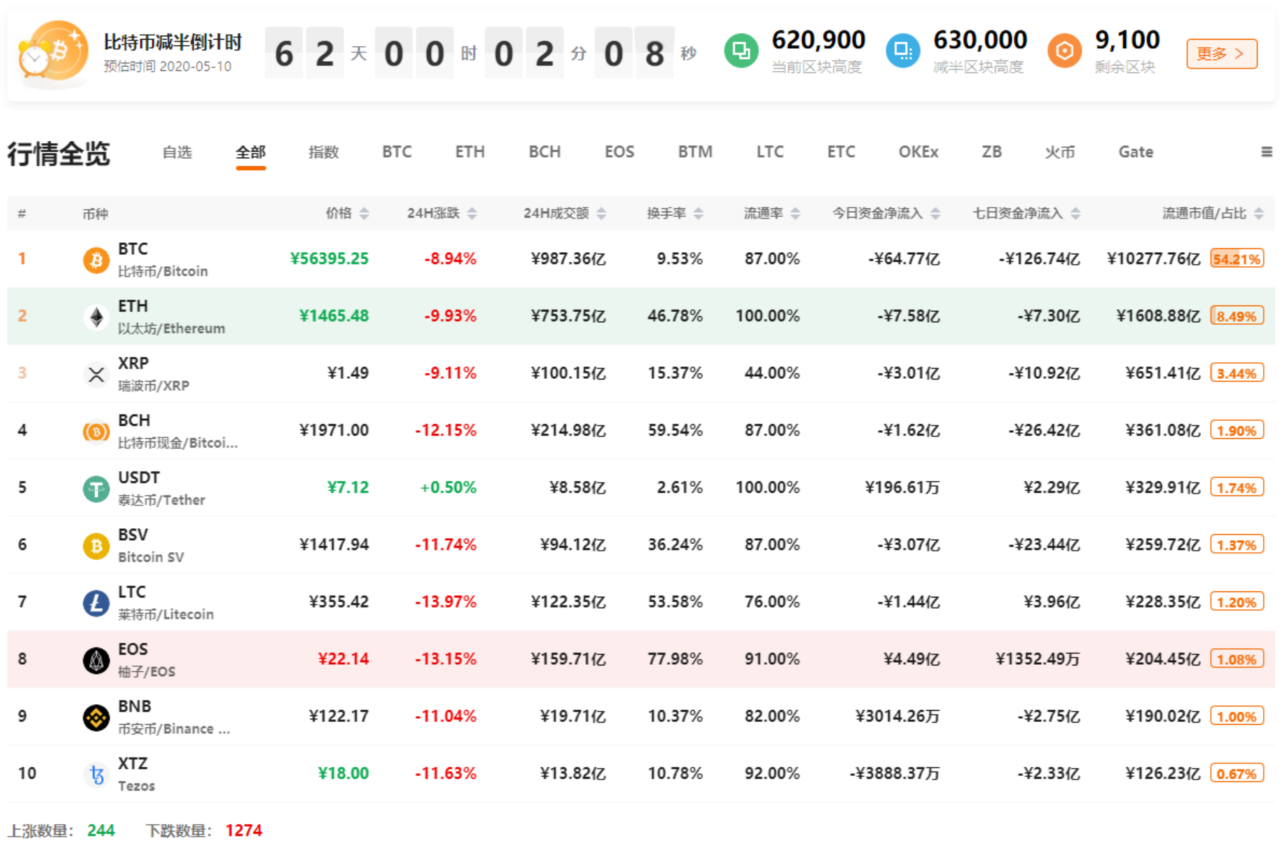 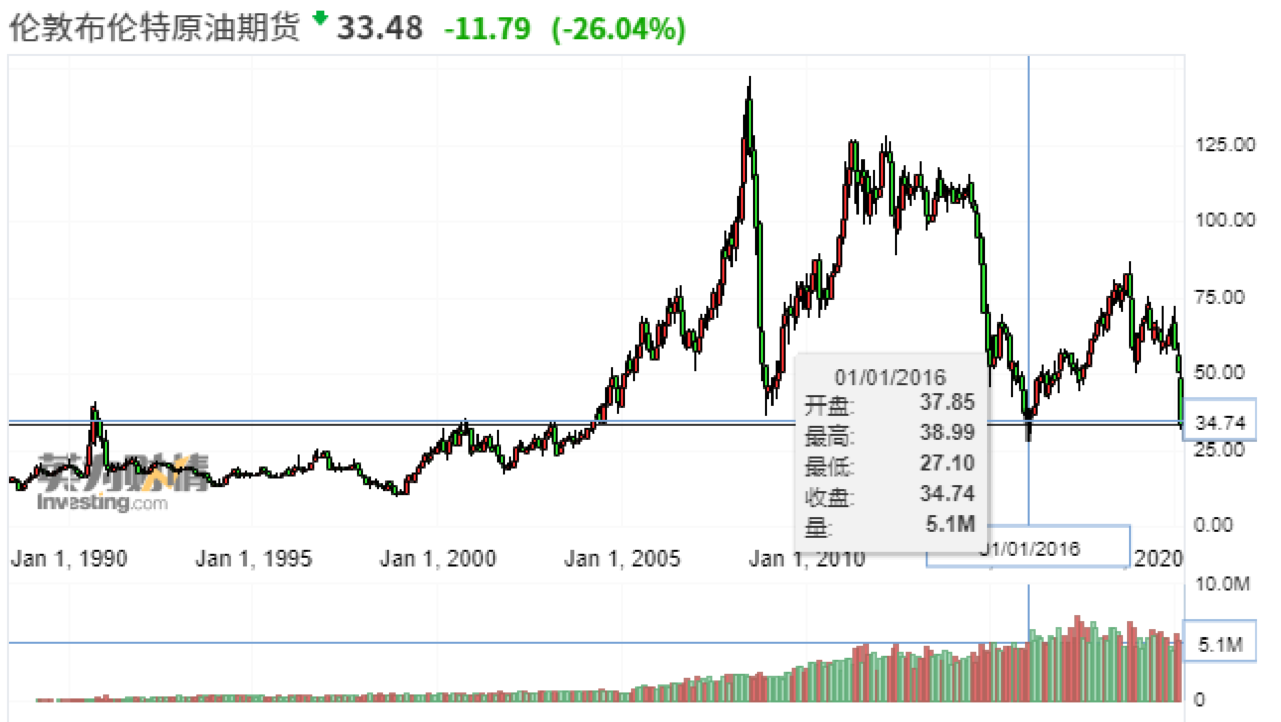 At the OPEC + Vienna meeting last Friday, in order to cope with the downside risks of the current global epidemic, the oil producing countries should have “united together” to deal with the oil crisis caused by the downturn. However, in the face of the sudden increase in output reduction quotas and the extent of production cuts, Russia did not buy it and went away, leading to the failure of the production cut agreement. To make matters worse, Saudi Arabia spearheaded a market war on Saturday: First, the price of crude oil sold to foreign markets was significantly reduced, and the discount rate reached a new high of nearly two decades; second, it was prepared to increase crude oil production. Production will increase significantly. Affected by the double negative, oil prices plummeted after the market opened today. Brent crude oil and WTI crude oil fell by about 30%, the largest drop since the United States launched the Iraq war in 1991.

Today, more than 2,200 new cases of new coronavirus have been diagnosed abroad, of which more than 60% have been added in Italy, and more than 100 have been added in France, Germany, Norway and the United States. At present, there are still many uncontrollable factors in the spread of the global epidemic, coupled with the stock market crash in the past few weeks, the panic surrounding the capital market has not dispersed. The epic decline in the price of oil this time has further aggravated market panic, stock index futures have fallen sharply, and gold has experienced high levels of short-term fluctuations. Although A shares are generally optimistic about the capital market, they have also experienced significant declines. Even the relatively independent Bitcoin has not been spared.

Many people have classified bitcoin as a commodity, but using statistics found that there is no obvious correlation between crude oil price and bitcoin, and a weak negative correlation has been shown in the past decade. Moreover, bitcoin and crude oil have their own cyclical fluctuations: Brent crude oil futures prices recorded their lowest point in less than a decade (less than $ 30) in January 2016, and Bitcoin as early as January 2015 Bottom point; although both had a sharp rise in 2016, Bitcoin and crude oil recorded their highest points in nearly five years in December 2017 and November 2018, respectively. From the perspective of volatility, the volatility of bitcoin has gradually decreased in recent years, while the volatility of crude oil has increased significantly, the former has been significantly lower than the latter, which indicates that bitcoin has gradually matured as a new class of assets.

In short, this big drop in Bitcoin is likely to be affected by the panic in the capital market and is not directly related to the plunge in crude oil.

Yesterday to date, BTC has continued to decline in volume. Under the influence of market panic, a large amount of net outflow of funds, panic disk components are relatively large. Waiting a short time for the Air Force to run out will rebound.

Bitcoin fell below the 200-day moving average again, and has deviated from the long-term trend. Various indicators support long-term fixed investment. Although the daily RSI has entered the oversold range, you need to wait for stabilization, and then you can intervene in small positions to gain a short-term rebound.

Judging from the four-hour K-line, the volume of ETH at $ 200 is relatively obvious. At present, there are signs of stabilization and rebound, which will drive the broad market to rebound in a short time.

The trend of BCH is similar to that of BTC, but it has fallen back to the level when the market opened in April last year. If it is broken, there may be another bottom. Looking at the strength of Bitcoin's rebound in a short period of time, if the rebound is not strong, the downside risk will increase. 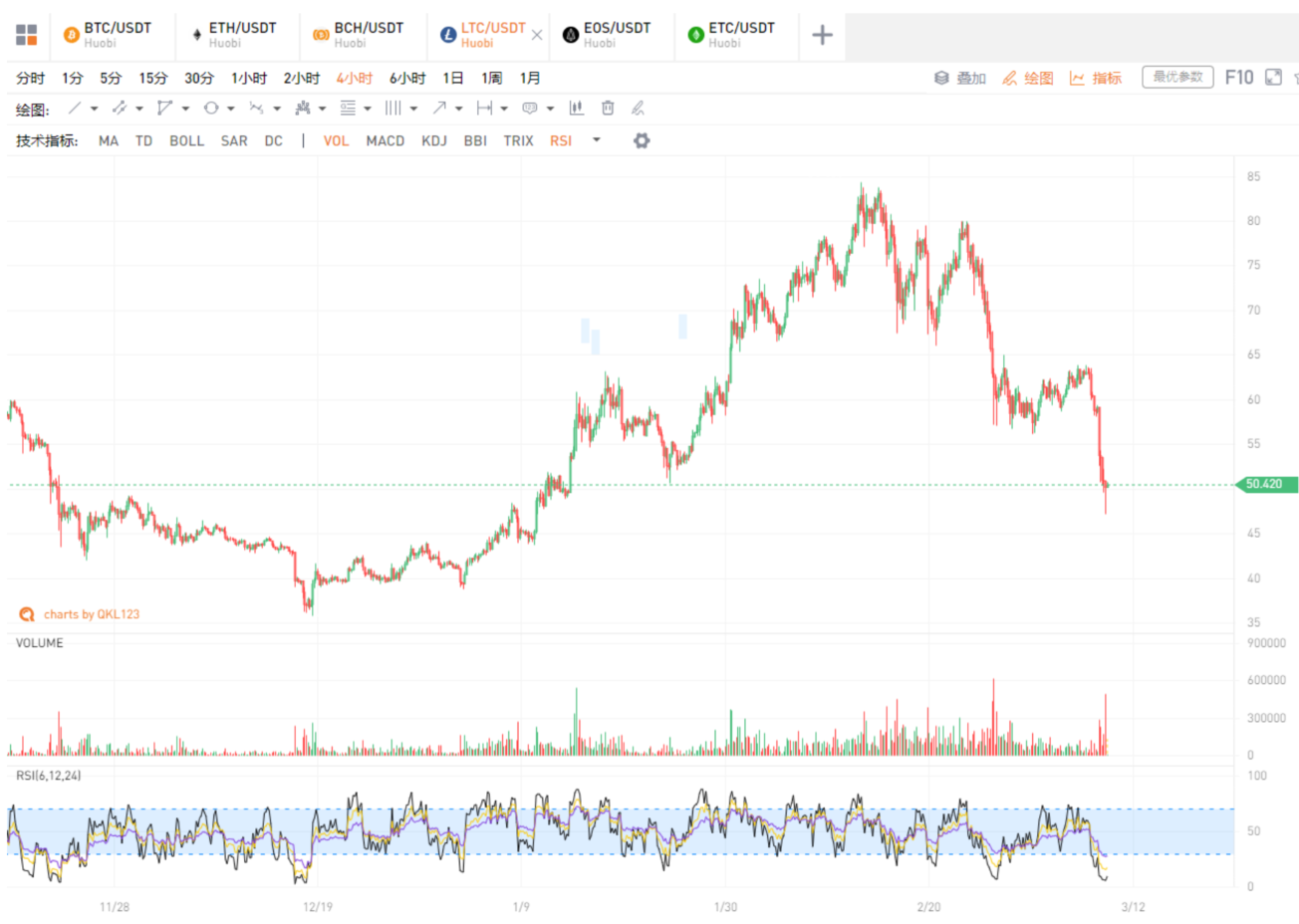 The decline of LTC is large. At present, a four-hour hammer-shaped K line appears at the bottom, and there are signs of stabilization for a short time. The number of kills this time can be slightly reduced compared to the end of February, indicating that the air force is depleted, and the short-term linkage rebound is mainly based on the upper pressure of 58 dollars. 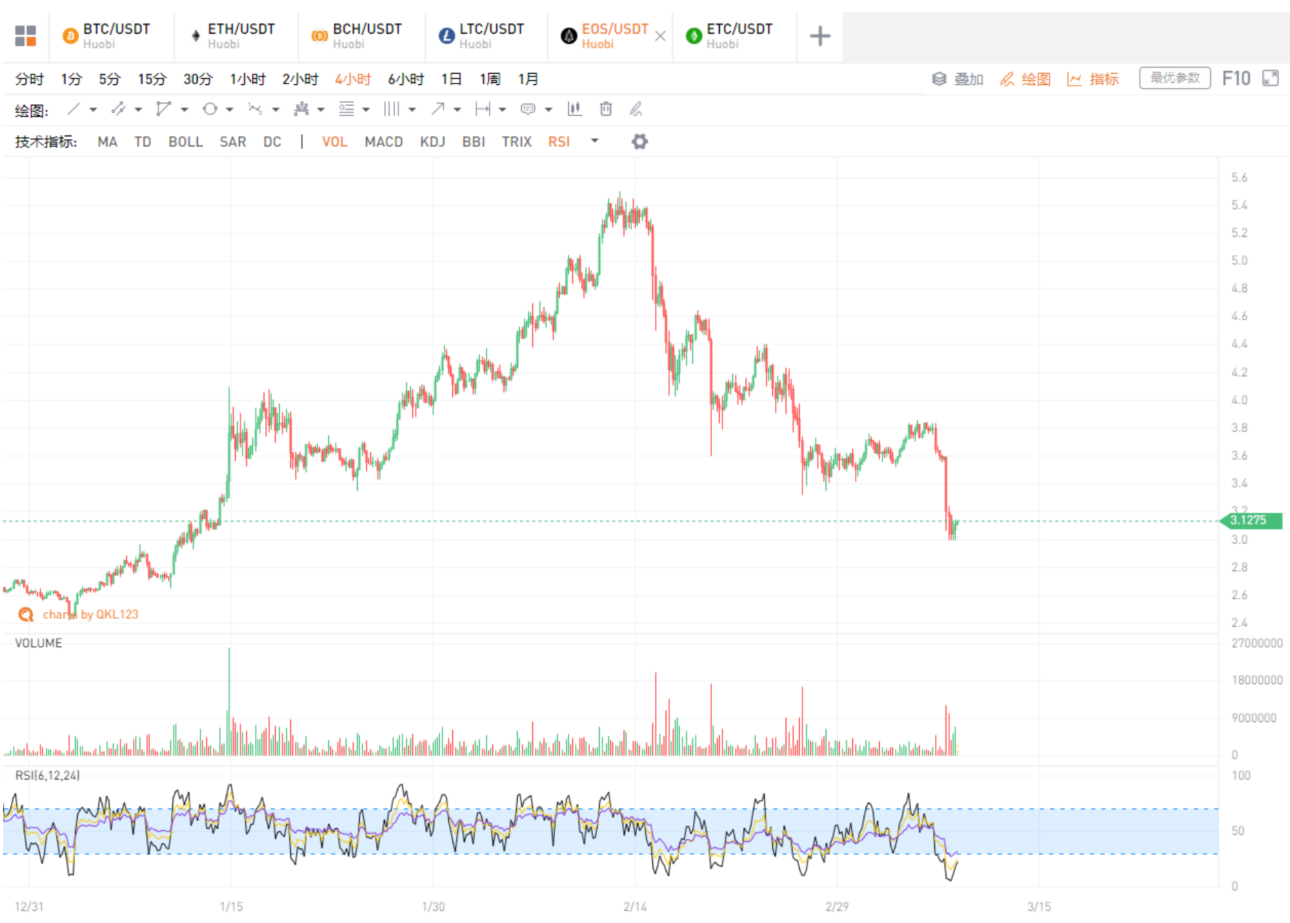 Since the beginning of the decline on February 15th, EOS has experienced four significant volume increases, and is currently returning to the level before the January volume increase. For the main force, the current price is a relatively ideal range for pulling up, so after the stabilization and rebound this time, the main force may re-engage. But follow-up depends on whether Bitcoin can stabilize. 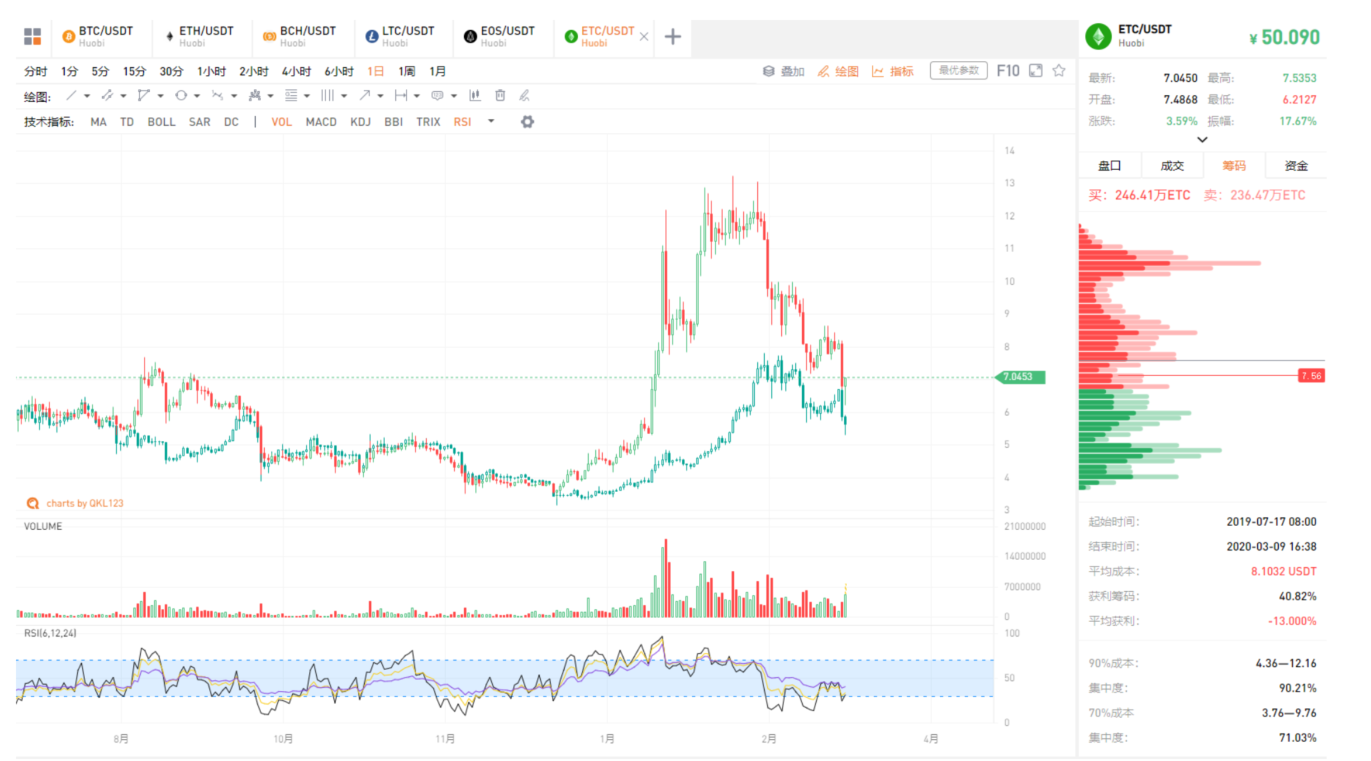 At the end of last year, ETC started to rise in a wave earlier than ETH, mainly due to the positive impact of recent production cuts, and its increase was significantly higher than ETH. However, near the high point of last month, the main force has a relatively obvious heavy volume shipment action. The recent continuous decline is large, the trend tends to stick to the ETHK line, and the short-term weak linkage is mainly ETH.

The long-term trend of BTC is still in the next one to two years, and it is expected to usher in the crazy bull market. It is now a good time to vote. The smart contract platform leader ETH, altcoin leader LTC, DPoS leader EOS, BTC fork currency leader BCH, and ETH fork currency leader ETC can be configured on dips.

BTC fell to the 200-day moving average, and the halving is good, and there is room for further release. The relative prices of other assets are relatively low, and they are involved in batches.

IOTA releases details of 2020 roadmap, focusing on privacy and scalability