Source: a chain of blocks: ratchet Pisa
In March 2020, the currency market shook: Bitcoin encountered a "Black Monday", and within two days, the price of the currency dropped by 16%. The global capital market is down, PlusToken hits the market to cash out … Many people are starting to look for reasons for the decline in Bitcoin.

Today, the global economy is facing huge challenges. In an unpredictable market environment, Bitcoin has failed to become a safe haven, but has been hit even harder.

It seems that the myth of Bitcoin's "safe-haven assets" may have been shattered, and it has become a completely high-risk asset.

Some people ridiculed and said that a good halving market originally meant that the currency price was halved.

In the early hours of the previous day, the price of Bitcoin was still above $ 9,000, reaching its highest point in a week. But after 10 pm that day, the price of bitcoin started to drop rapidly, once approaching $ 8,000.

At noon on March 9, Bitcoin continued to fall, falling to $ 500 within an hour and a half, dropping to $ 7676, which was the lowest point in history in the past two months.

In two days, Bitcoin's decline was as high as 16.4%. As a result, the news of "Bitcoin's fall" made it on the Weibo hot search list.

More than Bitcoin, almost all mainstream digital currencies have fallen in the last two days. ETH, BCH, LTC and other currencies fell within two days, even more than 20%.

"The two consecutive days of decline have triggered investor panic, and the funds on the floor are withdrawing step by step." A coin circle investor told a blockchain.

Alternative.me data shows that the currency market fear and greed index reached 17. This represents extreme panic in the market and many people are selling assets.

"From the K-line, bitcoin weekly is about to have a death cross, the probability of a fake death fork is very small, and Bitcoin may continue to fall in the future." Digital currency analyst Wang Kai said.

In his opinion, throughout March, Bitcoin still faces huge downside risks. "Several major events may lead to bad news recently, such as China's '15 .15 'party and the US House of Representatives hearing on March 25."

Recently, global markets including the stock market, gold, and futures have been in sharp fluctuations, and digital currencies represented by bitcoin cannot be kept aloof.

"During the high-risk period, Bitcoin is not a good hedging tool. In fact, it has fallen more than many risky assets," Robini, a professor of economics at New York University and a "doctor of doom", said on Twitter today.

In the painful decline, some investors began to ridicule: Could it be that the so-called halving market, not the output halved, but the currency price halved?

"The most immediate reason for the currency market's plunge this time was the shipment of PlusToken traders." Wang Kai told a blockchain.

In 2019, PlusToken, a digital currency wallet carrying a brick arbitrage banner, ran. It is reported that PlusToken's funds involved in the case amounted to more than 20 billion yuan and more than 3 million users, which was called "the first capital disk of the currency circle".

In July 2019, PeckShield, a blockchain security company, analyzed PlusToken's wallet addresses and found that these addresses co-existed 72,708 bitcoins with a market value of more than 700 million U.S. dollars.

"Once these bitcoins flow into the exchange, they will have an inestimable impact on the digital currency market." Wang Kai said.

Just on March 5, the assets on the PlusToken chain changed.

According to PeckShield data, on the morning of March 5, PlusToken began to transfer assets. The value of 13,112 bitcoins worth 120 million US dollars was transferred from bitcoin addresses starting with 15Z1sT and 1CkuKa, and dispersed into several small addresses.

"These bitcoins may flow into exchanges in the future or be sold as OTC OTC transactions," said PeckShield security personnel.

It turns out that PeckShield's predictions came true.

Foreign cryptocurrency analyst ErgoBTC also believes that the sharp drop in the digital currency market was caused by the sale of Bitcoin by PlusToken traders.

ErgoBTC monitored that within 24 hours, PlusToken directly transferred about 13,000 bitcoins to mix services. 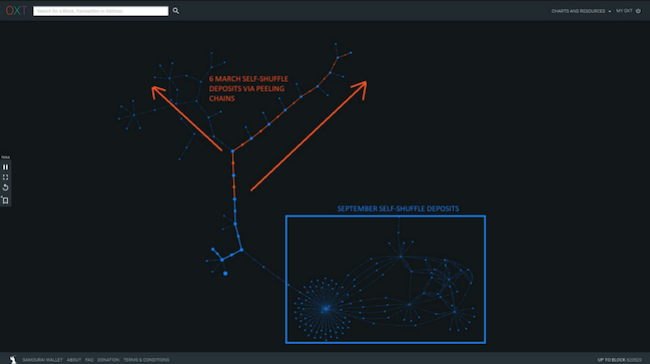 Mixed currency is a means of money laundering in the currency circle. The Bitcoin black money to be monitored is mixed with other Bitcoins to escape supervision and cover up the flow of funds.

"Now every bitcoin exchange is monitoring PlusToken's bitcoin to prevent them from realizing." Wang Kai said, "The purpose of PlusToken mixed currency is to avoid exchange supervision and cash out."

In fact, since August 2019, traders of PlusToken have been selling digital assets in bulk.

In December 2019, PlusToken transferred 790,000 ETH in the same way, which directly caused the total market value of the digital currency market to plummet by $ 12 billion.

In addition to PlusToken hitting the market, another factor that caused the digital currency market to plummet may be the plunge in international crude oil prices.

According to Bloomberg News, Saudi Arabia started a full-scale oil price war on March 7, announcing a significant reduction in crude oil prices, and released news that crude oil production is about to rise sharply.

As soon as the news came out, the crude oil market experienced an "epic plunge."

On the previous trading day, the benchmark for international crude oil markets, Brent crude oil futures prices, plummeted by 10%. After opening this morning, the price plummeted another 31%. Crude oil futures suffered a sell-off, the biggest drop since the United States launched the Iraq war.

"The global capital market is liquid. Compared with the crude oil market, the digital currency market is small. When an earthquake occurs in a large market such as crude oil, it will inevitably affect small markets such as digital currencies." Wang Kai said.

During the plunge, various incredible rumors also appeared in the currency circle.

Yesterday, a quick screenshot said that according to CNN, a Bitcoin whale named Film died of new crown pneumonia. Rumors have it that he has joined hands with Chinese bookmakers, and his loss of contact has caused panic among Chinese bookmakers, who have started to sell bitcoin on a large scale.

A blockchain survey found that foreign media, including CNN, have not released this news. But this rumor caters to the general public and is widely spread within the currency community.

In fact, in the first two months of 2020, the currency market has been in ups and downs.

But this is also a turning point.

It was found that when the U.S. stock market plummeted, Bitcoin lost its hedging function that had been talked about in the past.

"It is not difficult to see the trend of the currency market and U.S. stocks, and the bitcoin price is basically positively correlated with U.S. stocks," said Wang Kai.

The sudden outbreak of new pneumonia caused a large number of Chinese companies to suspend work and disrupt the production rhythm of global manufacturing. In late February, the epidemic began to spread globally, and the global economy was directly affected.

In the past month, the Dow Jones index of the U.S. stock market has fallen by nearly 5,000 points, and the interest rate on the US 10-year Treasury bond has hit a new low since 2016. The prices of investment products such as gold and oil have fluctuated sharply, and the global economy is in great uncertainty.

"In the future, if you look back at the first few months of 2020, you may think that this is a turning point in the times." Some investors expressed emotion.

As mentioned earlier, compared to the stock, gold, and futures markets, the currency market volume is smaller and the impact on uncertainty is more obvious.

As a result, in the beginning of February, players in the currency market were still convinced that the price of bitcoin had halved, and the price would continue to rise. One month later, everyone began to sell bitcoin in panic.

In the coin circle forum, bitcoin holders and multi-armies began to scold the "air force" for sucking blood. One long man cried and complained about the ruthlessness of the currency circle: "One million positions were sold out, what should I do next?"

"Shoring makes money, and gains more experience, and everyone has a better tomorrow." Someone teased.

"In the end, they will inevitably become leeks." He said.

In 2020, the global economy will face an eventful autumn.

Bitcoin was born in the financial crisis of 2008. Satoshi Nakamoto believes that when the crisis comes, it is a reliable safe-haven asset.

But now, this consensus is being broken.

"Bitcoin will continue to fall, and the aftershocks of the capital market will continue." A digital currency analyst said that Bitcoin's prospects are not optimistic.

Can Bitcoin, which has an…