Since the birth of BTC, it has been a mystery for most people. Is it about to burst the speculative bubble or the mainstream currency of the future? Maybe a commodity of the future? How to determine whether its price is reasonable and whether its price trend is reasonable? Technical analysts on platforms such as TradingView, Twitter, Telegram, etc. are divided on the price trend of BTC. Currently, the average transaction price of BTC on major exchanges is $ 7,900 each. Some predict prices will drop to around $ 5,000. However, bulls believe that in the next May, we will witness the price of each BTC surpassing a high of $ 13,000.

Existing valuation models and their limitations

Among those models based on the basic attributes of BTC, the "Stock-to-Flow" model proposed by planB based on the concept of future issue scarcity attracted the attention of BTC enthusiasts. Later, through further research in this field, especially Nick's proof of the co-integration relationship between flow and price, the rationality of the model was further verified. Assuming that its independent variables are constant in the future, it can accurately predict the range of future price changes estimated by the model. 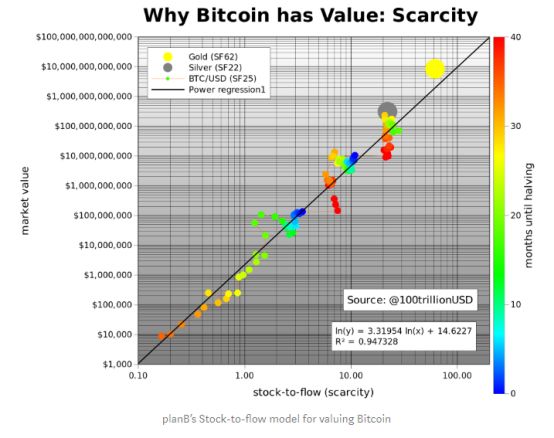 Although I am personally impressed with this model and would consider using it when trading in a large time range, it is not used for swing trader for less than one quarter The best tool for trading. In the extreme bull market phase, you can see that the actual price of BTC is more than four times the price predicted by the model, and blindly following the forecast may cause the account to shrink by as much as half in the bear market phase of BTC. So the range of residuals given by the model is too large. 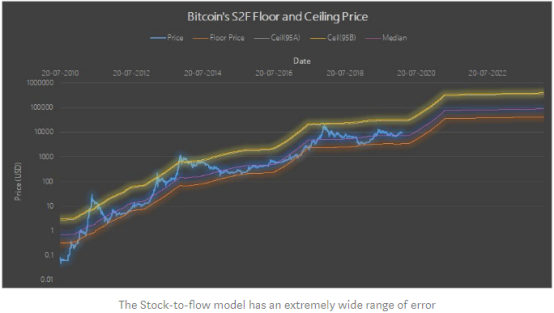 This model also cannot evaluate other Proof-of-Work (PoW) digital currencies, such as Litecoin, BCH, ZCash, Monero, etc. However, since they have been occupying market share in the past 24 months, it can not be seen that these digital currencies should be priced at 0 just because they are PoW digital currencies, so we need to better explain their valuation.
Finally, the model assumes that BTC mining will continue until the final block is mined in 2142. In this case, the value of BTC will tend to be infinite. However, if mining stops suddenly before 2142, BTC traffic will drop to zero. If this happens tomorrow or five years from now, will the price of BTC surge to infinity in a short period of time? The obvious answer is no. If this happens, its price is expected to drop significantly due to this black swan incident.
This model proposed by Charles Edwards attempts to value BTC based on energy costs. It is a more practical valuation tool than the "Stock-to-Flow" model, because the early end of BTC mining may cause the price of BTC to drop significantly instead of pushing it to infinity. This valuation method can also be used for Evaluate other PoW digital currencies and their BTC trading pairs. For example, by valuing BCH in USD, the value of BCH / BTC in Satoshi can be obtained. However, like the "Stock-to-Flow" model, the "Energy-Value" equivalent model is too smooth to be sensitive to price changes. In extreme bear markets, the price of BTC was 60% lower than the model price in 2011 and 2015, and was 45% lower than the model price in the same situation at the end of 2018. Because the model cannot yet convey a more consistent bottom price, it also leaves room for further modeling based on production costs.
One of the shortcomings of the "Energy-Value" equivalence model is that it ignores the inclusion of capital expenditure (CapEx) as part of BTC mining costs. Capital expenditures for BTC mining include the cost of purchasing mining equipment, setting up mine infrastructure, and regulatory / legal expenses. In addition, in addition to electricity expenditures, operating expenditures (OpEx) will include labor expenses and pooling costs, which the model ignores.

The model was proposed based on data released in November 2013, and at that time ASIC miners had just come into view. In addition, the model also assumes that people tend to use the most efficient miners (for obvious competitive reasons), so in this model it is assumed that ant miners are used.
The data related to the cost and rating of the antminer currently in use is obtained from the antminer website, while the corresponding old data is obtained from e-commerce websites such as Amazon or Alibaba.

The life of ordinary mining machines is about 2-3 years, so we use the depreciating balance depreciation method to make depreciation adjustments to their purchase costs. In addition, in most cases, newer miners will be introduced before the end of the service life of the previous model, so the effective cost of the previous miner depends on the amount of BTC it mined before it was replaced, which is also called Depreciation method for production units. For example, S3 has been in use for about 153 days (July 2014 to December 2014), during which an average of 0.97 BTC was mined. Therefore, its effective purchase price is $ 299 / 0.97 = $ 308.24. It is worth noting that this model assumes that the entire mining network has the same time between the old and new releases of all models of mining machines. The model shows that the price of BTC is approaching its production cost. This matches what BTC creator Satoshi Nakamoto mentioned in his white paper.
The introduction of more efficient mining equipment can reduce production costs, and if the overall reward is halved, the cost will double.
Currently, the cost of mining one BTC is approximately $ 7,577.51. Assuming that the network hashing power remains the same, and with the launch of the S19 Pro, when the next block reward is halved in early May 2020, this cost is expected to be $ 13,964.11.

Predicting prices with the CoP model

The BTC mining cost mainly lies in the cost of mining equipment and its efficiency-this accounts for almost 70% of the total cost, and only 30% of the mining cost is due to operating costs, which are mainly due to the operating equipment electricity Consume.
By regression of previous data to predict the effective cost (Hashrate * Efficiency * Cost) and network hash rate of future ASIC miners, the cost of mining BTC can be estimated. Please note that during this period, the cost of electricity is assumed to be constant, and the efficiency of mining equipment has not improved in any paradigm. This is the same as the situation where FPGAs were replaced by ASICs at the end of 2013, resulting in a leap in efficiency and cost reductions. different.
The chart below shows the exponential increase in the cost of ASIC miners and the network hash rate, indicating that the price of BTC is expected to rise in the future. Extending the CoP model to other PoW digital currencies

To test the effectiveness of this cost-based model, we apply it here to other PoW digital currencies. If the model can reliably analyze the price of BTC, it should also be feasible for other PoW BTC tokens.
The following are the results of the analysis of BCH by this model. 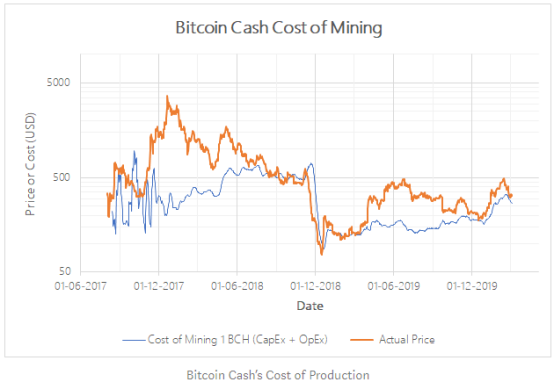 The CoP model is useful for pricing PoW digital currencies. It also helps to use BTC to measure the value of these alternative investment vehicles. If the price of the token is much higher than its CoP, it is expected to be in a local bubble and will therefore decline in the near future. We saw this on BCH in late 2017.

Comparing CoP models with indices of other assets

There is some confusion in the industry about the relationship between BTC prices and stock markets, commodities, currencies and energy indexes. Some analysts claim that BTC is more similar to rare metals, such as gold, and that the price of BTC should rise if the stock market collapses or the main fiat currency collapses. BTC's critics doubt the validity of BTC's hedging effectiveness and believe that if the world enters a recession, the price of BTC will fall, while another group speculates that BTC is an asset that is completely unrelated to the main investment instrument and its price The rise will not be affected by changes in large-scale markets.
The CoP valuation model can also inspire the analysis of the combination of BTC's production costs and major market indexes.

Information development: The application for the blockchain filing has been submitted for publication, and the blockchain business has generated revenue and is advancing

John McAfee: Don't hate Bitcoin, but Bitcoin is not the future of cryptocurrencies

KPMG report: Blockchain is expected to attract more attention from financial technology investors, especially in the field of microfinance