Source of this article: Caiyun Blockchain

Adaptive Capital partner and on-chain analysis expert Willy Woo said that according to his model, the "regular" forecast is that the price of Bitcoin will reach $ 135,000 in the future. However, if there is a major trend reversal and the price of Bitcoin falls to the $ 1,000 range, it will test "the most powerful Bitcoin mining machine that can continue to operate."

$ 1,000 Bitcoin, the ultimate test for the strongest Bitcoin miner 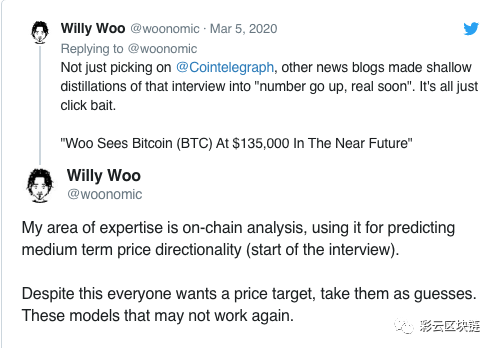 In the latest episode of the Keizer report, Bitcoin supporters and show hosts, Max Keizer interviewed Willy Woo. Woo warned of some extremely bullish price predictions for Bitcoin enthusiasts who don't have certainty. In addition, he gave his opinion on the worst case scenario for Bitcoin.

He said, "If the price of BTC drops to a low of $ 1,000, it will test the last most powerful Bitcoin mining machine that can continue to operate." He also added that by then, the network will be very vulnerable, Extremely vulnerable.

If we only have a few miners left without an adequate hash rate, the cost of a country or individual attacking the Bitcoin network will be very low. At a certain price, this thing is unjustifiable to a large opponent.

Keizer and expert analyst Willy woo believe that Bitcoin will eventually "win" in the face of the currently unbelievably dismal market. Woo explained that he used the flow of funds on the blockchain to understand the true direction of the market.

He also said that on-chain analysis can give insight into whether miners are selling coins, the flow of capital, and other indicators, so that he can understand the way the price moves.

In fact, Woo's bullish tweet indicates that he thinks the correction in the market is over and we are back to the bull market.

So, how much will Willy woo see the price of Bitcoin in the next six, nine and twelve months? He reminded Keizer that he could not know exactly the price movement, but could determine the price direction. He says:

We can do other models that try to choose the highest price. For example, you can choose 35 times the cumulative average of prices. In fact, this is to select all the highest prices in Bitcoin's 10-year history as data reference.

When he was forced to make price predictions, he mentioned that keep in mind that Bitcoin's super bull market could last about four years, "the most optimistic guess is that it will exceed $ 100,000."

For the upcoming Bitcoin mining reward halved, this will halve the mining reward. "What's important is that Bitcoin's inflation rate has fallen below that of gold," Woo said. He continued:

Digital scarcity is more perfect … Gold is not actually scarce, we have found gold on the asteroid belt of the universe … Bitcoin is absolutely scarce in mathematical game theory … Someone will eventually figure out how to mine gold on a large scale, which will cause the price of gold to collapse.

Keizer asked if we will see Bitcoin transition from value storage to transaction medium in the future as people start using encrypted digital currencies. "If I can buy a house with Bitcoin, then I'll go." Woo believes this will happen. However, he reiterated that it will not be soon. Its market value needs to become bigger first. Bitcoin is only one sixth of the trillion dollars, fiat currency is 90 trillion dollars, and real estate is 220 trillion dollars.

Keizer added that the market value of gold is $ 7-8 trillion, and once bitcoin has gained a market value corresponding to gold, we will be in the expected price range of about $ 400,000. Woo replied: I think we will have to wait 7-10 years for this.

Woo can't provide accurate price predictions for any speculative asset, and Woo reiterated that his analysis should not be considered investment advice.

Bitcoin may be as high as $ 130,000, but it may also be reduced to $ 1,000. Everyone must decide for themselves the future value of Bitcoin, and first do their own research.

Theft of blockchain assets is not a violation of rights, and industry autonomy helps promote regulation.