The debate over whether Bitcoin is a "risky" or "hedged" asset has never stopped in the past few years. In other words, does Bitcoin perform better when investors in traditional markets are scared and seek protection of safe-haven assets such as U.S. Treasuries; or whether Bitcoin can be more effective when investors risk seeking and investing in assets such as stocks Big returns? We believe that the answer to this question is important to the role of Bitcoin in multi-asset portfolios and the adoption of digital assets by more institutions. The difficulty in answering this question is that Bitcoin has a short history and has neither experienced the US recession nor experienced periods of high inflation. To answer this question, we conducted a more in-depth study of the safe-haven period (stock market declines since 2011). Our finding is that during these declines, Bitcoin's price performance was still good, but well below its daily average return. Based on the 2 standard deviations of the price change in the stock market on the day, we find that Bitcoin is positively correlated. However, our observation is that in the past year, Bitcoin has become more and more a safe-haven asset, especially in day trading in response to major macroeconomic events.

As an asset, Bitcoin is still in its infancy (launched on January 3, 2009). Reliable price data cannot be traced too far-one year later in March 2010, the first online exchange was launched. However, it was not until the end of 2010 that Mentougou achieved a daily trading volume of several thousand dollars. In view of the uneven trading data in 2010, we will use the trading situation in early 2011 as the start of the study.

Bitcoin has not been tested

Because Bitcoin has been around for a relatively short time, it has not encountered various economic conditions in the United States. The Great Recession that ended in June 2009; the S & P 500 Index reached a low of 676.53 on March 9, 2009. These events occurred in the early stages of Bitcoin and well before the establishment of a Bitcoin online exchange. The highest annual inflation rate since 2009 is 2.39%. Since its inception, Bitcoin has enjoyed the benefits of US economic growth and low inflation.

Acting as a hedge when the stock market falls

Because the sample period does not include periods of inflation that may indicate that hard assets such as gold are performing well, nor periods of recession that indicate that safe-haven assets such as U.S. Treasury bonds are performing well, we turn to other risk representatives in our research, mainly US stock market. By evaluating the price performance of bitcoin when the stock market falls, we can understand the performance of bitcoin's risk aversion, even if the trend of the entire stock market continues to rise. The US stock market is represented by the S & P 500, which is one of the most commonly used references in the US market. We use the price of iShares core S & P 500 ETF (IVV) to represent the benchmark index. Because of its low tracking error, we prefer SPDR S & P 500 Trust ETF (SPY) and Vanguard S & P 500 ETF (VOO). We acknowledge the slight drawbacks of using ETF prices for relative index prices (there are premiums and discounts on NAV), but we hope to replicate more practical experience in portfolio management.

We define a decline as a fall of more than 5% from a high to a low. Although "market correction" is generally defined as a high-to-low drop of more than 10%, this definition will leave few events to analyze. The chart below shows the highs and lows of the S & P 500. 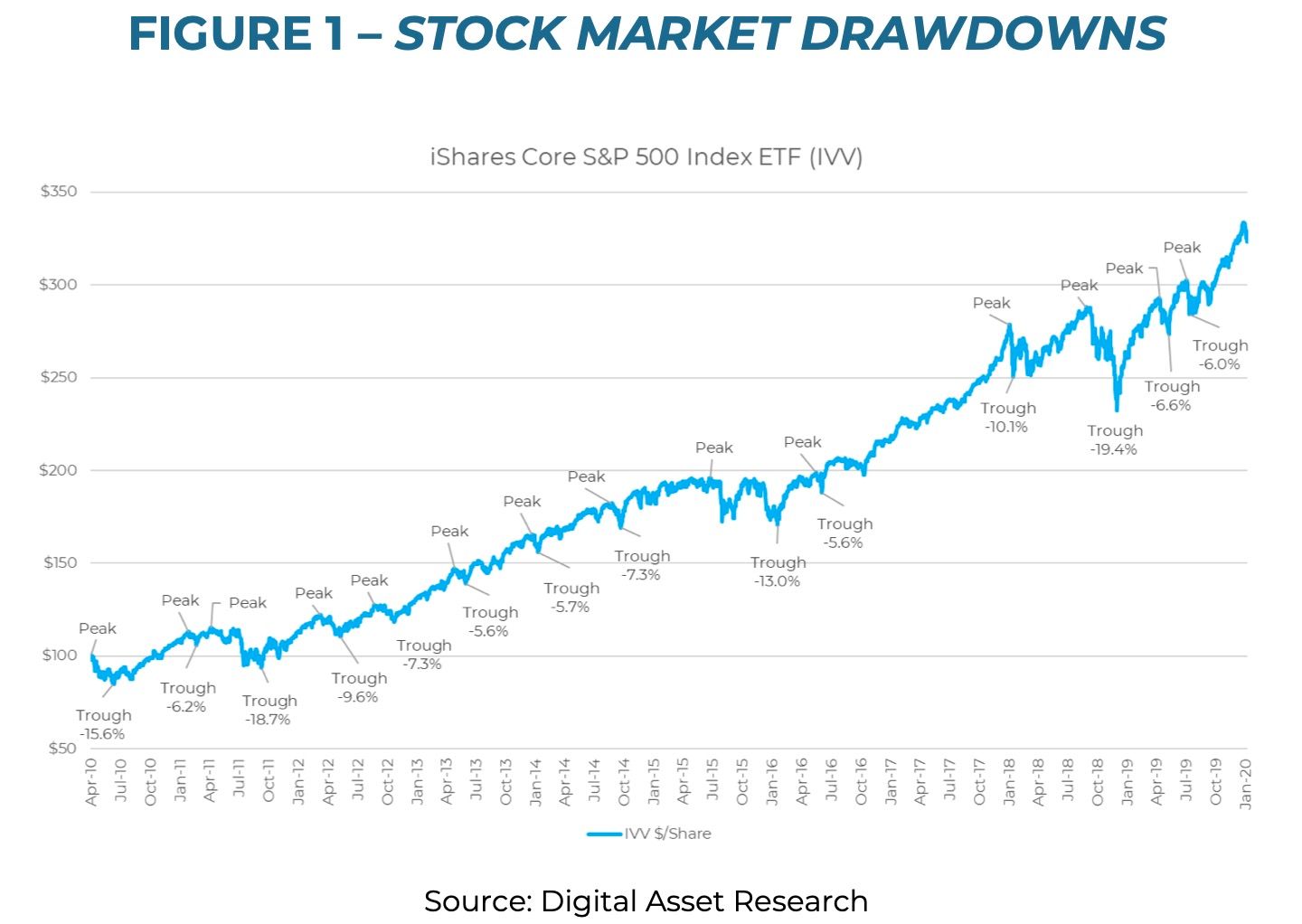 By plotting the logarithmic price of Bitcoin and the cumulative decline in the S & P 500, we can better understand the price change of Bitcoin during these events. 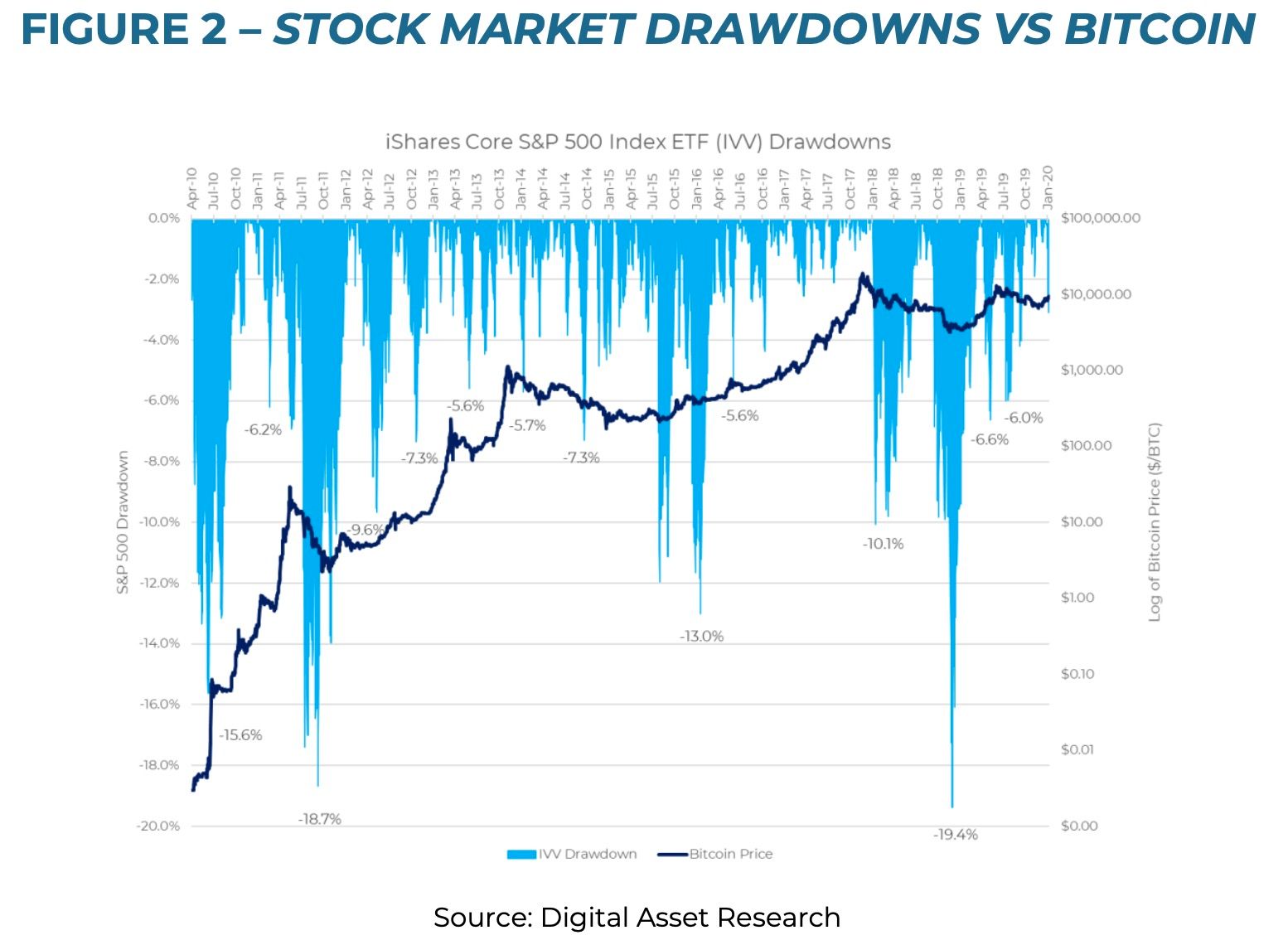 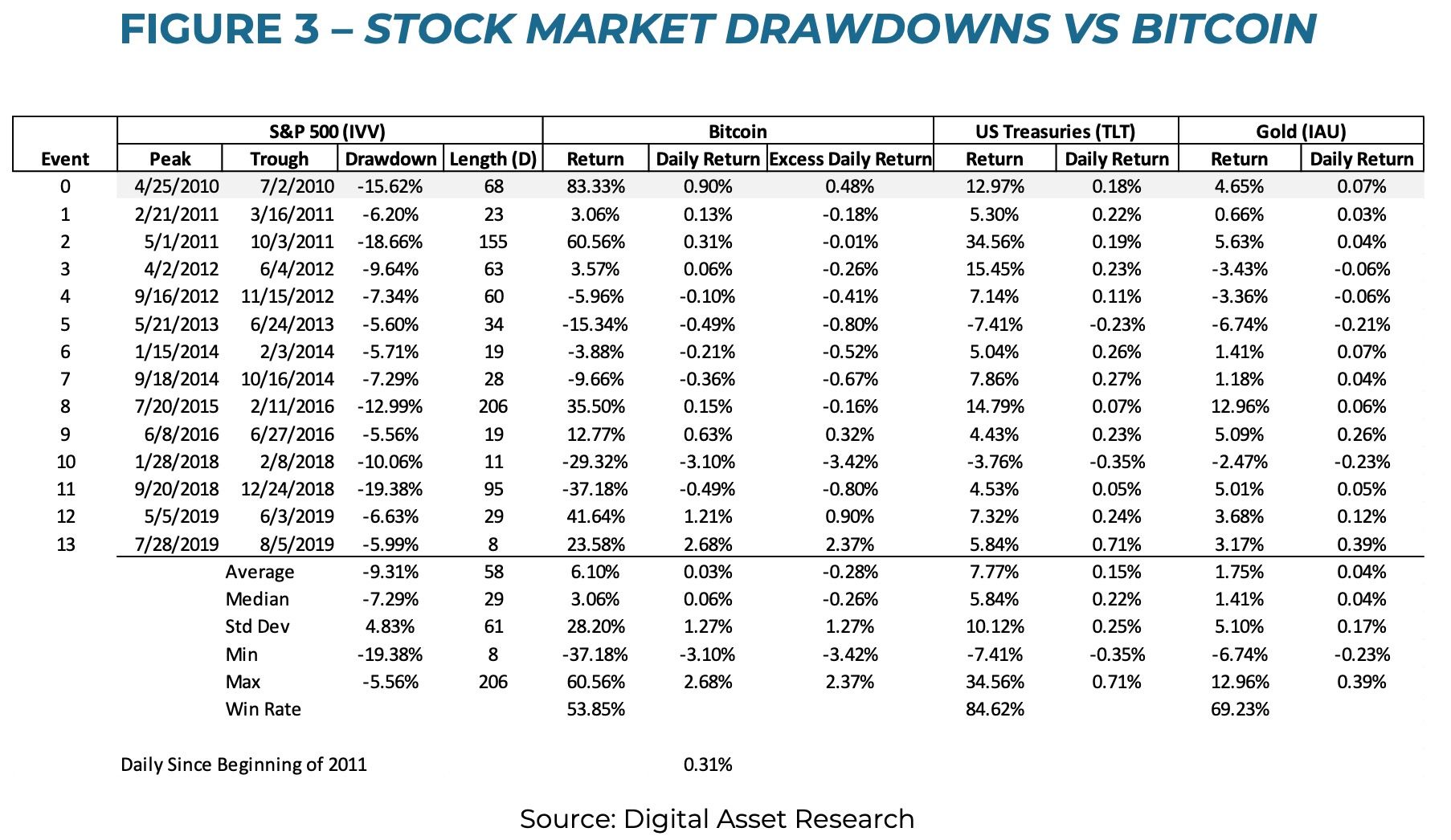 We can draw two conclusions from the analysis. The first is that the price of bitcoin performed well in the risk-aversion event caused by the stock market decline. The average return during these declines was 6.10% and the median was 3.06%.

However, if we look at the daily price gains (these events vary in length), the results become even more confusing. Among those risk-averse events, Bitcoin's average and median daily returns were 0.03% and 0.06%, respectively. Both are far below the geometric average daily yield of Bitcoin of 0.31% since 2011. Our conclusion is that under the circumstance of risk aversion, Bitcoin still has positive returns, but these are much lower than the daily average returns of Bitcoin.

We also think it's important to look at the net win rate of these events-the percentage of times that Bitcoin has made a positive return during a stock market decline. The net win rate for these types of transactions is 53.85%, which is slightly more than half the time. We believe that Bitcoin can be a means of hedging, but it is not abnormal.

Finally, observations on the large fluctuations in the price of the stock market in a day show that Bitcoin is positively correlated with this risk factor.

The research and analysis of the multi-day drop shows that Bitcoin usually still has a positive return during the hedging event, but it is far lower than the daily average return that Bitcoin usually shows. In addition, hedging is not always reliable, it is only slightly effective half the time. When the price rises or falls significantly, we also see the same change in the price of Bitcoin, which means that there is a positive correlation between price and hedging. However, it is interesting to note that over the past year, we have found an increasing reliance on Bitcoin as a safe-haven, especially in day trading. Maybe the increasingly accepted regulated futures of CME or Bakkt make traditional macro investors use this tool, or Bitcoin traders may have more awareness of macro events. We still believe that Bitcoin's price trend continues to be largely influenced by asset and industry-specific events, which is a good thing for a portfolio of multiple assets.

Start-up members of the Bitcoin Foundation: The US Congress is well aware of the difference between Libra and Bitcoin

The panic and greed index today is 37, and the panic increases.