At low tide, I knew who was swimming naked.

Bitcoin has fallen below $ 5,000, a drop of more than 40%, and the data shows that Bitcoin has become one of the biggest assets in this round, second only to oil. Tesla, which recently resonated with Bitcoin, also fell by 40%. 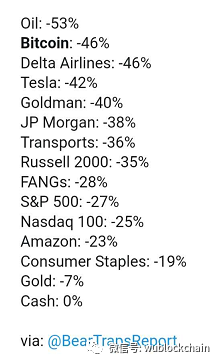 Why did Bitcoin fall below $ 5,000? Wu said yesterday that the blockchain has made a detailed analysis: " Don't expect Bitcoin to halve again in the global crisis of epidemic spread! ".

The core reason is the global spread and exacerbation of new crown pneumonia, which in turn leads to cash being king, withdrawal of cash from speculative products, and reluctance to speculate. It can also be seen from the above figure that cash is the only asset that has not fallen at present, and investors naturally vote with their feet.

Will Bitcoin rebound in the future?

There are three reasons to support the rebound:

1. Some data show that the dips started one after another, 76% of coinbase users are buying, and the number of user addresses holding 1btc reaches a new high;

2. China announced that the new crown pneumonia has passed its peak, showing the controllability of the epidemic. Looking at China's time, European and American countries will also pass the peak in 2 months, when the world economy returns to normal;

3. When the world economy returns to normal, the halving of Bitcoin will bring a wave of positive sentiment.

For miners and mining machine manufacturers, if the current currency price and total computing power are maintained, only half of the mining machines such as S19, S17, and M30S will be able to recover the original cost after being halved. It is generally unfavorable to the mining industry, because the halving market is combined with the plummeting currency price, and the number of new miners who will be deployed before the flood season will be significantly reduced.

Is there a chance? There are also.

In early 2019, when Bitcoin plunged to $ 3,000, many mines were shut down, and some basic second-hand mining machines such as Ant S9 were almost cleared as scrap iron and cabbage. Thousands of mining machines. After a few months, the price of the currency quickly rebounded. They sold the mining machine and sold it, and immediately made dozens of times of profit.

The currency circle has never been short of speculators, and greed is still the right rule when others panic.

Guosheng Securities: Blockchain technology innovation is significant, and it is expected to be supported by both policies and funds.