On March 17, China Decoration Construction released a news report that its blockchain technology service platform tried its application for the first time and landed on the scene, and went online through the platform and issued its first loan. It is worth noting that Wang Cheng, the chief technology officer of China Construction Engineering, released this news, not Fang Yushu, the company's previously designated head of the blockchain, which is Shanghai Yege Information Technology Co., Ltd. ") CEO.

There are many indications that the "honeymoon" of the construction and information of the pigeons is ending.

The construction of Zhongzhuang Construction and the information of the pigeons in the blockchain field also contributed to the surge in the stock price of the former. From RMB 5.14 in May last year all the way up to RMB 12 in mid-January this year, an increase of 130%.

On August 18, 2019, SINOMACH and Yange Information signed an agreement to jointly establish a blockchain financial platform. The road of cooperation between the two companies has begun.

The pigeon information is a blockchain technology company that was established on October 15, 2018.It was established less than one year after signing the contract with China Decoration Construction. It is a junior in the blockchain industry. It is not known why Zhongzhuang Construction puts so many technologies ahead, and the blockchain technology companies with rich application experience do not use it, and choose to cooperate with the pigeon information.

On October 23 of last year, the Securities Times published a report interviewing the director of China Decoration Construction, Yu Guitian. Yu Guitian praised the pigeons and said: "The relevant person in charge of the company's blockchain platform (Fang Yushu) and the team in the block The field of blockchain has been deeply cultivated for many years. On June 21, 2019, he won the first place in the first Yangtze River Delta Blockchain Application Innovation Contest …. The relevant person in charge of the blockchain platform and the team have strong blockchain technology strength and will give The company promotes the construction of blockchain and digital currency research to provide important resources and technical support. "

The best performance of a honeymoon is "get married and have children".

Zhongzhuang Construction and the pigeon information first decided to have children. On November 8, 2019, China Decoration Construction announced that the company and Yange Information Technology signed the "Agreement on the Joint Establishment of a Blockchain Financial Platform" to jointly fund the establishment of a limited liability company with a registered capital of 10 million yuan. Construction holds 51% of the equity of the joint venture, and Yange Information holds 49% of the equity of the joint venture. The name of this joint venture is Shanghai Zilian Technology Co., Ltd. (hereinafter referred to as "Shanghai Zilian").

But today, the task of giving birth is considered complete, but the gene has been "mutated." According to the company's investigation data, China National Construction Engineering actually held 95% of the equity of Shanghai Zhuanglian through its wholly-owned subsidiary China Construction Intelligent Chain, and Yege Information only accounted for 5% of the equity. Far from the 51:49 mentioned in the announcement (this difference is not explained by China Decoration Construction). 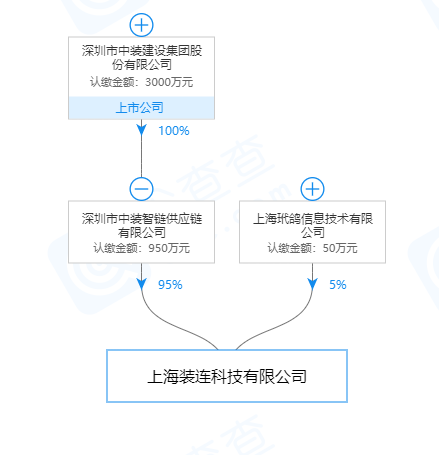 And the "marriage" of the two sides has not moved as of March 18, 2020. Interestingly, on February 8 this year, 玳 Dog Information 玳 Dove Information unilaterally announced that it has recently completed a ten-million-yuan financing led by a listed company's construction. However, the industrial and commercial information shows that the pigeon fund information has not completed this financing, and its registered capital is still 722.9131 million yuan.

No matter whether it is a formal announcement by a listed company or the disclosure of the pigeon information, there is no explanation. Where is the good financing?

Fighting left or right or betrayed?

On the other hand, SINOMACH is laying out its own blockchain.

In terms of employment, on January 17, the board of directors of CSIC announced that it had appointed Wang Cheng as the company's deputy general manager, chief technology officer and general manager of CSIC. Wang Cheng has been working at Tencent since July 2000. He has been a programmer, project team leader, technical director of Tencent Network, and assistant general manager of Tencent Network. In February 2008, he founded Lantu Travel. From May 2017 to August 2019, he served as the vice president of online business and R & D at Shenzhen Ailu.

In February of this year, the company also said that the IT center has nearly 40 technology development employees, and the company will actively introduce related technical personnel under the coordination of the chief technology officer.

These two projects attracted the attention of regulators, and the Shenzhen Stock Exchange specifically asked. In replying to the inquiries of the Shenzhen Stock Exchange, China National Construction Engineering explained the use of two investments worth 154 million yuan. Simply put, IDC is used as a hardware facility for cloud computing, and cloud computing is used as a resource facility for blockchain. IDC and cloud computing will provide basic capabilities for the platform development of the company's blockchain business.

Nowadays, most domestic blockchain technology companies do not have their own original research technology, which is usually based on Bitcoin, Ethereum, Super Ledger Fabric, and recent technologies such as DAG and Coda. Domestic companies with strong technical strength will reconstruct the underlying architecture, P2P protocol, encryption algorithm, privacy protection, etc. according to actual applications, which is costly and time-consuming. But if it can be used, two or three technicians can get it with open source technology in one month, and the cost is not high.

SINOMACH recruited troops and started investing in the underlying facilities and even hardware, which cost over 100 million yuan, which means that SINOMACH has to build its own complete blockchain system.

This layout is embarrassing for the pigeon information.

Many insiders of the blockchain circle revealed to the pulse of the mutual chain that the underlying technical strength of the pigeon chain is not strong, focusing on the application layer. According to the information provided by the company, more than a dozen related software copyrights and patents have been obtained. However, the inter-chain pulse was queried at the State Intellectual Property Office, and only one patent was applied for the pigeon information, which is still under application review and has not actually been obtained. In addition, this patent is an application layer patent, which is used to calculate the repayment ability of vehicles operating in the financial industry, and cannot directly contribute to the decoration business of China Decoration Construction. All this means that the substitution of the pigeon information is relatively strong.

In addition to the technical level. Zhongzhuang Construction was punished by the Shenzhen Securities Regulatory Bureau for the information on the pigeons. On March 13, SINOMACH officially received a warning letter from the Shenzhen Securities Regulatory Bureau. The reason was that on November 1, 2019, SINOMACH responded to investors' questions about participating in the central bank's digital currency on the Shenzhen Stock Exchange Interactive Exchange platform. A positive answer was given. That night, the People's Bank of China clarified the rumors through the Shanghai Securities News and China Securities News.

The rumor said that the central bank's digital currency working group met with Fang Yushu, CEO of Luge Information in Shanghai, and conducted in-depth communication on the development, access and testing of digital currency in the field of building decoration. Afterwards, Fang Yushu explained to the media: Ge Ge and teachers of colleges and universities, senior executives of financial institutions, and of course relevant experts of the central bank, have discussed technical and business practices, but have not met. The news was not released by the pigeons.

However, from the perspective of the logic chain, China National Construction will verify the investors' questions and confirm with the pigeon information, and then tell the investors that it is true.

On March 18th, Mutual Chain Pulse inquired as a investor and cooperated with China Construction Engineering. A person from China Securities Construction Securities Affairs Department said that foreign investment is a relatively important issue. In line with the principle of being responsible to shareholders, the company is carefully evaluating its investment in the pigeon information. At the same time, he also said that after the arrival of Wang Cheng, the company's own blockchain team will be strengthened. Regarding the inconsistency between Shanghai Zhanchain's equity allocation and the announcement, the person said he would need to know more about the situation.

The insiders of the pigeon information revealed to the mutual chain pulse that the cooperation between the two parties is going through the process, and the two parties are also discussing the members of the board of directors, which may complete the business changes in the near future.

It remains to be seen how this will end. However, whether it is the construction of the equipment or the information released by the pigeons and the actual situation, it is irresponsible to the public.

Deputy Director of the National Cryptography Administration: Promoting the stable development of the commercial password industry and promoting the integration of new technologies such as passwords and blockchains

CEO of CryptoKitties Development: The open ecosystem of the blockchain has not received enough attention

DCH will be officially launched on August 8, 2019 at 8:08 pm MXC Matcha Exchange IEO