Editor's note: The original title was "Satoshi Manmoto | Who is behind the development of Bitcoin?" 》

1. Who funded the development of Bitcoin?

2. After the new crown virus war, Bretton Woods-style reforms may overthrow the dollar;

3. Mathematical statistics prove that Stock-to-Flow will affect the price of Bitcoin;

1. Who funded the development of Bitcoin?

This is a report from the BitMEX Research Institute, which compiles a list of major organizations and individuals who fund open source Bitcoin and Lightning development. According to the data collected by Block, Blockstream and Lightning Labs are the largest contributors to open source Bitcoin development, and as far as Bitcoin Core contributors are concerned, Chaincode Labs is currently the largest development funding owner. Overall, the availability of funds, transparency, and degree of allocation among financial supporters are healthier than in the past. Prior to the new crown virus attack, some economists and currency officials were still controversial about whether the dollar-based system could continue into the 2020s.

A worrying issue is that U.S. monetary policy (the actions taken by the Federal Reserve to expand domestic employment and maintain price stability) has repercussions in various countries around the world. Whenever currencies depreciate against the dollar, they often increase inflation . Although exporters of raw materials or manufactured goods may become more competitive, consumers will feel pressure to increase prices of imported goods. Another factor is that many commodities such as oil, copper and gold are denominated in US dollars, while producer countries including Russia, Brazil and South Africa are at the mercy of foreign exchange markets.

The "Quantitative Easing" (QE) script was developed by former Federal Reserve Chairman Ben Bernanke, who was awarded the title "Helicopter Book" for his claim to "invest heavily in the financial system when necessary." In the months of 2008, from August to December, the size of the Fed's balance sheet doubled to more than $ 2 trillion. Over the next few years, this number has doubled again, to over $ 4 trillion.

The US Central Bank, led by current chairman Jerome Powell, has made an unprecedented commitment to purchase bonds in unlimited quantities to support the market, while resuming the quantitative easing policy emergency loan program of the 2008s, the new The move could quickly swell the Fed's balance sheet to more than $ 8 trillion.

Such capital injections would only help bankers and wealthy people with little to no benefit to the lower and middle classes, resulting in a campaign similar to the occupation of Wall Street after the 2008 crisis. Outside the United States, central banks in various countries may have greater willingness to get rid of the impact of the United States on the global monetary system while fighting the new crown virus.

"One of the biggest challenges today compared to 2008-2009 is that the state of cooperation is very low," Truman said. The new global monetary system is highly unlikely to see a global scale like the Bretton Woods Accord. Some countries participate in the agreement.

3. Will Stock-to-Flow affect the price of Bitcoin?

The author assumes that he wants to use data analysis to prove that Stock to Flow is invalid. It is assumed that Stock to Flow will not affect the price of Bitcoin. Of course, in the end, the hypothesis will be overturned and a valid theory will be reached. 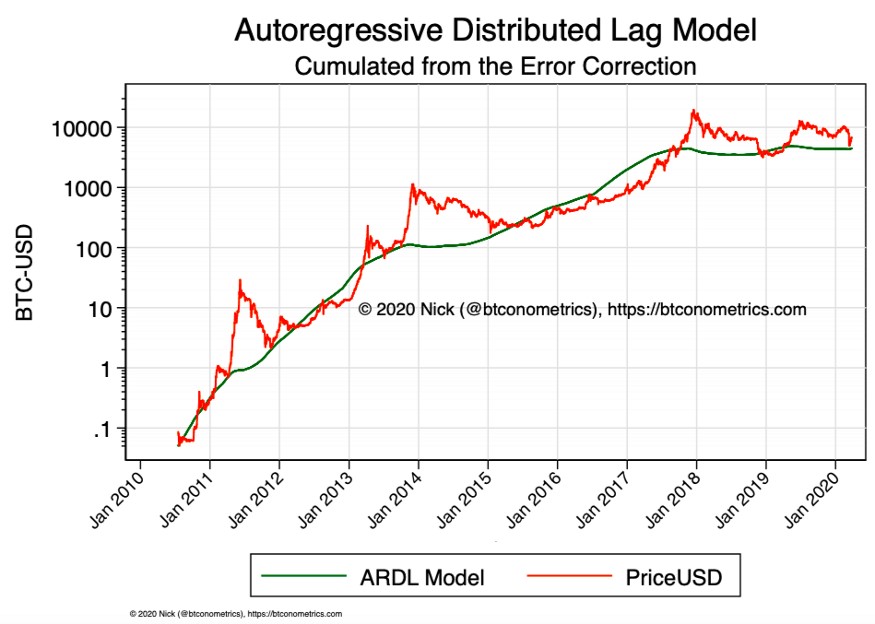 The boundary test of the level relationship in the ARDL model provides very strong evidence to refute the null hypothesis and concludes that Stock to Flow does have a significant impact on the price of Bitcoin in USD.

Since the coefficients of the long-term parameters are significantly lower than the OLS parameters, further research is needed. Future research should focus on improving the ARDL specification, including adjustments to confounding variables or adjustments that may affect intermediary variables (such as difficulty adjustments).

Cryptium Labs is one of the developers and main bakers of Tezos, and they recently wrote an article about zero-knowledge technology Supersonic SNARK in an attempt to detail the technology into a higher-level description. It is indeed relatively advanced, and the details are not described one by one. It requires a certain mathematical foundation for the reader. The full text consists of two parts, and only the first part has been released.

PCP (Probability Testable Proof) and the more general polynomial IOP have very good characteristics, that is, only a few evaluations of certain polynomials are sufficient to determine the truth of the statement to be proven. However, there is a stumbling block: the prover must send the entire polynomial to the verifier (resulting in lengthy proofs, which is an undesirable attribute for SNARK), or the prover must perform the verifier evaluation in some way. SNARK uses cryptography to send only a short promise of the polynomial, not the entire polynomial. Although this comes at the cost of relying on cryptographic assumptions now, this greatly reduces communication between the prover and the verifier.

The article is very long, bringing together many stories, coincidences, and fanatical cultural worships of bitcoin design and currency history related to the number "0"

Bitcoin is the singularity of the global economy: the ultimate monetary center of gravity-the index devourer of circulating value in the world economy, the epitome of time and the zero point of money.

Historically, precious metals have been the best currency technology in terms of five key characteristics of currency: severability, durability, portability, recognizability, and scarcity. Among monetary metals, gold is relatively scarce, so it has become a more reliable way to store value and outperform other currencies in the market. Free markets are a distributed computing system. They continuously absorb all human inter-subjective views of the world within the scope of objective reality based on people's general needs and available capital supply. In this case, verifiable scarcity is the best representative of currency authenticity: ensuring that currency does not depreciate over time.

Assuming "new gold" is found in the crust, assuming it is evenly distributed across the entire earth's surface, as far as these five currency characteristics are concerned, it can be completely comparable to gold (and it is more scarce). The dynamics of the free market will cause it to be The currency is chosen because it is closer to absolute scarcity, which makes it a better means of storing value and spreading price signals. If we can force everyone on the planet to speed up the mining of gold, the supply of gold will soon soar. Unlike Bitcoin, it is impossible to guarantee a permanently fixed supply of any form of currency-to our knowledge, absolute scarcity can only be digital.

Just as the number zero enables our digital system to scale and perform calculations more easily, currency also enables economies to scale society by simplifying trade and economic calculations. In short: scarcity is critical to the use of money. Zero-growth terminal money supply represents "perfect" scarcity, which makes Bitcoin almost like the "perfect" currency technology that humans once had. Absolute scarcity is a major currency breakthrough.

All in all: Bitcoin's invention represents a discovery of absolute scarcity or absolute irreproducibility, just like a heliocentric or other major scientific paradigm shift. Absolute scarcity is a discovery. In a world where Bitcoin already exists, it is no longer possible to successfully launch the system through workload proofs due to path dependence. As long as this consensus mechanism is used, Bitcoin cannot be copied or destroyed by another crypto asset.

A true "Bitcoin Killer" will require a completely new consensus mechanism and distribution model. Implementation under the supervision of an unprecedented organized human group: To date, no idea has been developed to meet these requirements. Just as there is only one type of analog gold, there may be only one type of digital gold. For the same quantifiable reasons, digital systems from scratch became the dominant mathematical agreement, and capitalism surpassed socialism, and the absolute scarcity of Bitcoin supply will continue to surpass all along its path to global dominance Other currency agreements.

Numbers are the basic abstraction that governs our world. Zero is the vanishing point in the field of mathematics. In the field of interpersonal competition and cooperation, money is the dominant abstraction that governs our behavior. Money naturally becomes the most tradable thing in society, including communicating with others and our future self. Scarcity is a characteristic of money, it can keep the value of money in time, and allow us to trade with our future self in exchange for the lost opportunity cost (if we do not decide to hold money, we can use other ways to trade money ). As productivity increases, scarce money generates value. For these reasons, the most scarce technologies will exhibit sufficient currency characteristics (severability, durability, recognizability, portability) and often turn into money. Simply put: relatively scarce money wins. In this sense, zero in mathematics is zero, which is an absolute scarcity of money. It was an amazing discovery, like a window into nothingness.

Ripple CEO: 99.9% of all XRP transactions have nothing to do with us