In this report, we show how the "black Thursday" price plunge has led to a reduction in the depth of the digital currency order book.

When the price slump begins, as traders scramble to sell their assets, market orders can quickly destroy limit orders placed on the order book. Traders usually do not have time to readjust their positions, which may cause the market sell order to quickly swallow the market, leading to a decline in BTC prices.

When looking at the order book data for Black Thursday, we noticed the following: 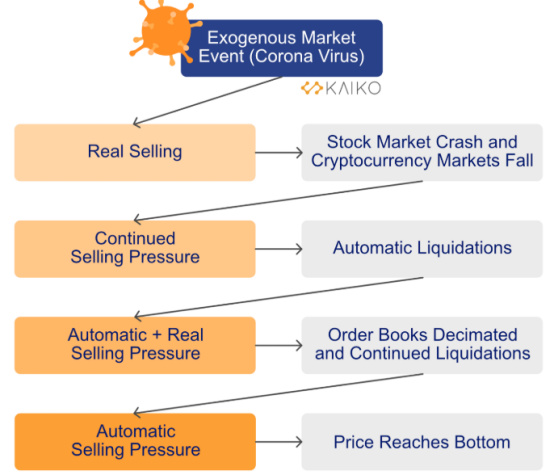 The chart above shows how a truly exogenous market event leads to an endless feedback loop of falling prices, and what we call "Automatic Selling Pressure" exacerbates the situation because of automatic clearing and orders The reduction in book depth has led to further price declines.

During a period of sharp price declines, market orders are much more risky, because price recipients may receive a "bad order," meaning that the order is filled at different prices depending on the number of transactions in the order book. When the selling pressure increases, the market sell order will flood the entire order book, thereby destroying the depth of the order book and driving down asset prices.

Ultimately, the "depth" of the order book can have a significant impact on asset prices. In fact, the higher the liquidity on the order book, the more difficult it is for market orders to push down (or push up) prices.

However, no matter how deep an order for an asset is, a price collapse like March 12 will be exacerbated by the crypto industry's consolidation and overlapping supply and demand flows.

The price of the asset less reflects the "true value at the point in time allocated through the market-based price discovery process", but more like the product of an endless feedback loop triggered by automatic clearing and reduced LOB depth.

We plotted the average 10% buy / sell depth per hour for 6 exchanges from Coinbase, Bitfinex, Bitstamp, Bittrex, Gemini and Kraken. The first and second crashes are marked in the graph to show how the average depth dropped sharply between March 12 and March 13. To better understand how the price plunge affects the order book, we took a closer look at the BTC / USD order book on Coinbase. We first plot the average hourly transaction depth (bidder and inquirer) from March 10th to 15th. 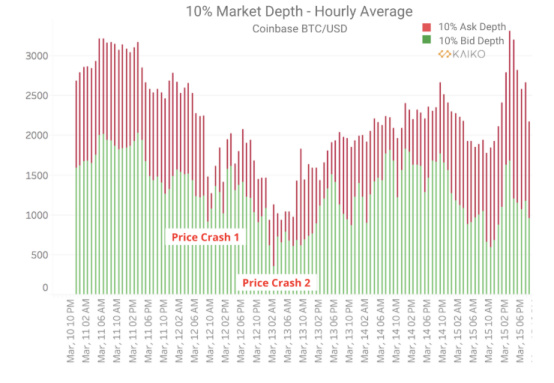 We can determine the impact of two price crashes on the average hourly market depth. Compared with the first plunge, the second plunge caused the average number of transactions on the order book to drop significantly over a long period of time, which may be longer. As prices began to fall around 10:30 AM, we observed a sudden decrease in the market depth of the Coinbase order book. After the first price crash, the 10% market depth was less than 1/4 of the trading volume before 10:30 AM. As market makers readjusted their positions, the market's depth quickly rebounded. 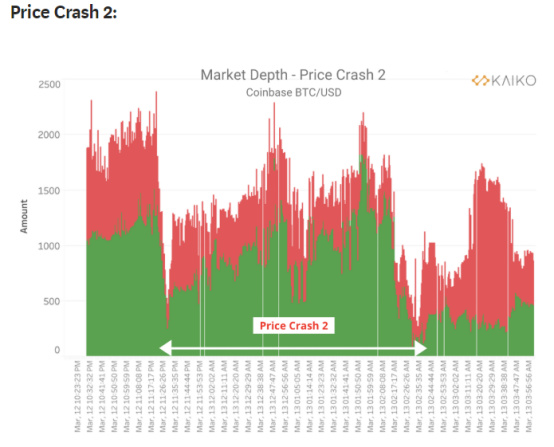 In the early morning of March 13, the price of BTC rose rapidly, which is why the purchaser's purchase volume increased sharply at 3:00 in the morning.

In order to further study how the price plunge affects the order book, we need to carefully study the bids and enquiries near the middle price. We calculated bid and inquiry orders at a 2% distance from the median price, as they are the prices most likely to be executed when the market moves. 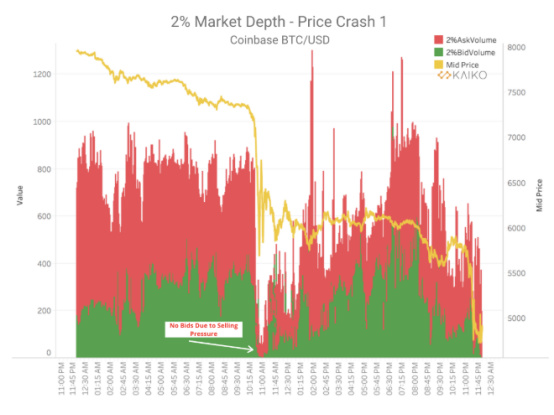 The result is very obvious. The above figure shows that as the price plunge starts (yellow line), the bid order in the order book is completely cleaned, that is, there are almost no bid orders. The results showed that the bid order was executed immediately and there were not enough limit orders to match the selling pressure from the price recipient.

When there are no bids near the middle price, the price will be further lowered because market orders will be filled at a lower price level.

The 2% market depth chart above can be further explained by the bid spread, which is a common indicator of market liquidity, that is, the difference between the best ask price and the best bid price. The narrowing of the spread indicates that the market is more liquid and the order book has sufficient depth. If fewer market makers place limit orders, the spread may widen significantly.

In volatile markets, spreads often widen, which indicates that prices are changing rapidly. From March 12th to 13th, the spreads of all BTC / USD markets widened significantly, causing orders to be filled at a price level far from the middle price.

The spread did not return to the level before the plunge but continued to fluctuate in the next few days, which indicates that market makers are still worried about another large-scale sell-off. We plotted a simulated average hourly price drop for a $ 50k sell order, calculated using a snapshot of the original order book. In the exchanges shown in the figure above, the initial decline in the price of mobile markets such as BTC / USD was lower, hovering between .01-.1%. On March 12, we saw the slippage climb more than 10 times. A few days after the price slump, the slippage was still much higher than the average, indicating that the depth and spread of the order book were still volatile.

The order book reveals the inner workings of the market crash, which can help explain how prices enter negative feedback loops triggered by real and automatic selling pressure. By charting market depth, spreads, and price declines, we show the devastating impact of price crashes on traders and the market as a whole.

Andreessen Horowitz: Bitcoin may become the most commonly used currency for network influencers in the next decade 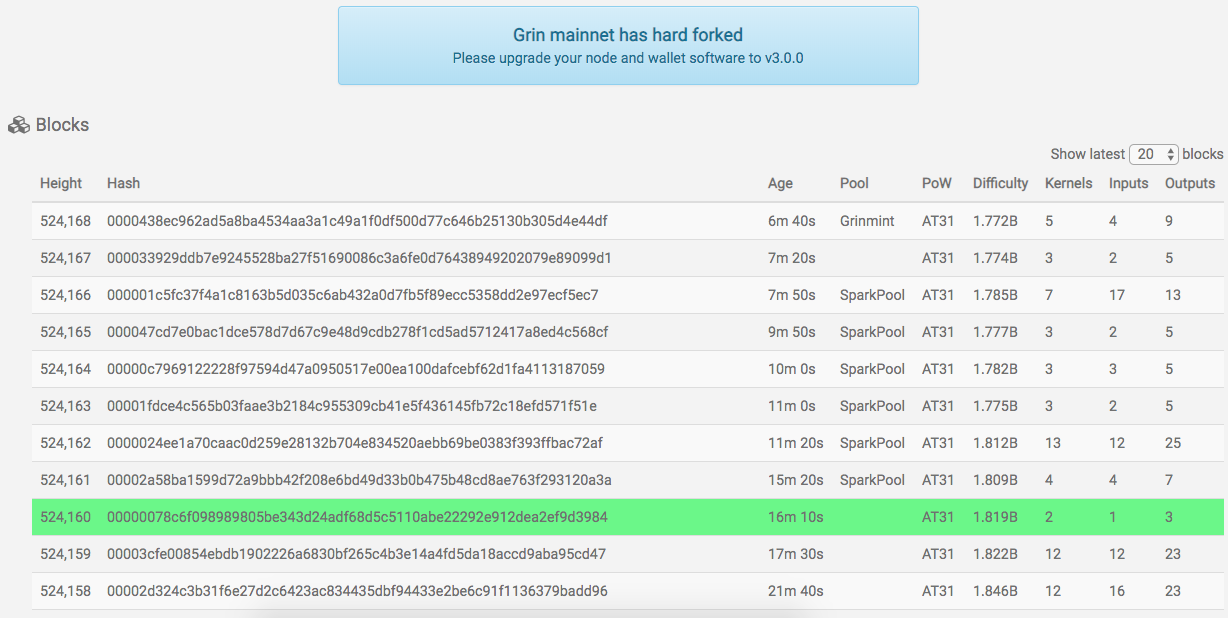