When the global financial crisis broke out in 2008, the Federal Reserve quickly acted to launch the first round of currency expansion through quantitative easing, which is also a signal to financial institutions that the central bank will be the final buyer.

In order to stimulate bank credit during the crisis, the Federal Reserve lowered the benchmark interest rate from 5% to 0%. We must know that sharply reducing interest rates is a good way to motivate financial institutions.

In March 2020, interest rates returned to the 0% level, and the fourth round of quantitative easing began-the Fed will provide $ 4 trillion in liquidity to stabilize financial markets. The liquidity provided by the Federal Reserve affects the global market, and the effects of printing money and cheap credit can be seen everywhere from stocks to real estate.

Whenever the economy slows down, financial institutions know that the Federal Reserve will definitely lower interest rates and promise to buy their bonds, and that was the case in 2008. The financial industry is so dependent on printing money that when the interest rate exceeds the threshold of 2%, capital markets begin to be under pressure.

Looking back now, will the same strategy work as the signs of a global recession become more apparent? 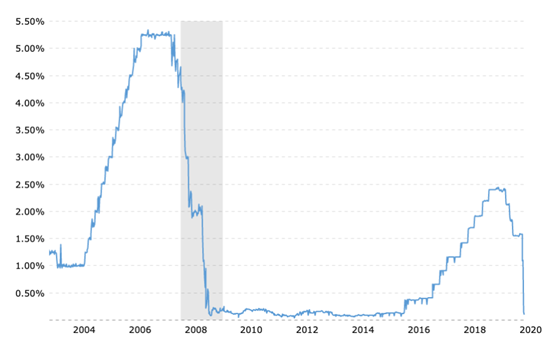 Because the Federal Reserve has implemented its monetary policy too lightly in the past ten years, the effect of this policy has been getting worse and worse.

Not long ago, after the United States announced a new round of quantitative easing and interest rate cuts, the capital market continued to decline. This is very unusual. It can be said that market participants have sent a rare signal that the continuation of the same monetary policy will not have a significant effect on the laid-off economy.

By March 25, the US Senate had passed a $ 2 trillion economic stimulus package. In other words, both the fiscal and monetary policies to rescue the economy have been used, and the Fed can only wait for market response. And this will bring great opportunities to Bitcoin.

The global economy has evolved into what it is today because the original economic boom was artificially extended by cheap credit. In the Bitcoin economy, no entity has the power to print money.

Economic sentiment is purely the result of supply and demand. As the Austrian school claims, the economy has its own ups and downs. Fighting this natural cycle will artificially prolong the ascent cycle, and when the collapse comes, it will bring disaster. This seems to be what is happening in the current economic market.

Bitcoin's basic economic framework can only be changed if the public agrees, and the probability of this happening is very small. With the economy in chaos, the Fed's inability to intervene further creates a perfect opportunity for assets like Bitcoin because it does not rely on the authorities to operate and thrive.

At the end of 2018, U.S. stocks ended with a year-on-year decline of 6.6%, while Bitcoin fell 73% from the beginning of the year. At that time, some people said that Bitcoin had reached the end of the bear market and should be ready to take off.

In a weak economy and everyone is cashing in, it is unlikely that retail or institutional investors will deploy Bitcoin. The retail industry needs cash to survive, and financial institutions are more willing to use relatively secure investment vehicles.

Over the past month, Bitcoin has shown a positive correlation with the S & P 500 Index (US economic barometer). Two weeks ago, this correlation reached an all-time high of 0.6, which means that bitcoin fluctuates synchronously with the stock market 60% of the time.

This does not mean that Bitcoin has lost its chance.

Under crisis, ZF will often be given more power than before, and they will not give up this power. As more and more people realize this, Bitcoin, as a decentralized payment protocol, will find a new life in this case.

From the current situation, Bitcoin will also experience a long period of price suppression. But this is still a hedge against high inflation in the future, which is rare, because many existing assets have no such effect, and this will become one of the incomparable advantages of Bitcoin in the near future.