On March 12, Bitcoin experienced a historic plunge, with a single-day drop of nearly 50%, but it was unexpected that the number of stable currencies USDT under the Tether had an explosive growth. Not only USDT, other stablecoins, such as USDC and Binance's stablecoin BUSD, are constantly increasing their offerings. What happened? What causes this in the market? What kind of impact will this additional issue have on the market in the end? The rhythm in the text for the introduction of the thinking of crypto traders, and the history of additional issues and price records, for your reference.

According to a report in March, the market value of USDT assets recently exceeded $ 6 billion and has increased by $ 1 billion in the past two weeks alone. In an industry valued at less than $ 200 billion, such capital inflows are clearly staggering. In addition, other stablecoins: PUSD, USDC, BUSD, etc. have also issued tens of millions of dollars. 1) What drives the demand for stablecoins?

2) How will the increase in the supply of stablecoins affect the development of Bitcoin?

1. "Mainly from Asia" OTC traders are seeking to acquire USDT. Although Sam did not elaborate on this assertion, it is a well-known fact that Chinese users use USDT to buy cryptocurrencies, because currently there is no legal currency deposit channel, and USDT is currently the fastest way to enter. Some also said that USDT is a great way to transfer funds around the world, and some people don't like to touch Bitcoin transactions.

Sam wrote that all of this "pushes up (the price of USDT), which in turn pushes up supply, and so casts so much (USDT)." 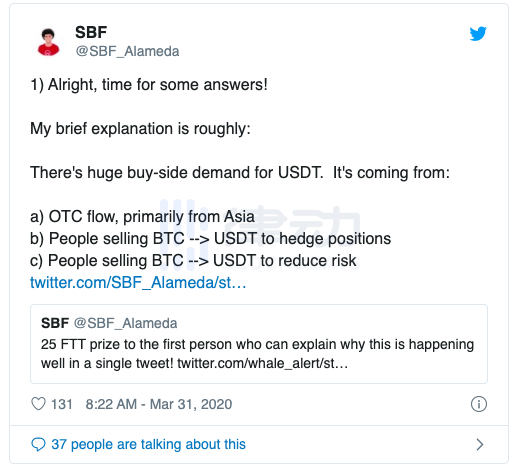 Although most of USDT's demand is seller's demand rather than investors' desire to buy BTC with stablecoin, the growing demand for "USD" in the blockchain world may drive the crypto market in the future.

As CryptoSlate previously reported, Charles Edwards, a digital asset manager, said in January this year that "the market value of Tether has changed significantly in the past 1.5 years, which has caused the price of Bitcoin to rise." It was learned that this view seemed to be confirmed when BTC rose to a high of $ 10,500 in mid-February. In addition, according to the understanding of the rhythm, before the BTC plunged from US $ 6,000 to nearly US $ 3,150 in November 2018, the BTC collapsed, the circulation of USDT dropped by hundreds of millions of dollars; in addition, Tether also minted before rising 330% in 2019 Hundreds of millions of dollars in stablecoins.

The record level of USDT minting we have seen indicates that Bitcoin may soon record a record rise. Fundamentally speaking, this makes sense; although there are few such detailed stories about people eventually returning by replacing USD with USDT, fiat currency entering this industry through stable assets should eventually become a bitcoin price Catalyst because USDT holders will use these USDTs to buy BTC or other digital assets.

This article is translated and organized by rhythm, on behalf of the original author. Cryptocurrency prices fluctuate drastically, and market trading risks are extremely high. The rhythm reminds investors to exercise caution and pay attention to asset safety.