"Diamonds last forever, one will last forever." Like diamond's ad, lettering on the Bitcoin blockchain can achieve similar results. For example, the only words left on social media will disappear due to the company's failure or the failure of the computer room. The vows carved on the stone will gradually be flattened by the sand and impact; however, it is distributed by tens of thousands of nodes worldwide and 100 + Eh / The bitcoin network jointly maintained by the hash power is not the same. The information stored on it cannot be modified, and it will remain on the chain forever, becoming an indelible memory.

We all know that Bitcoin is essentially a distributed database system, so people have found some special ways to enter information other than transactions on it; such as using the coinbase parameter, using the OP_RETURN opcode, or transcoding the Bitcoin address And so on. Among these people, Satoshi Nakamoto took the lead in leaving messages on the blockchain. On January 4, 2009, he left the headline of the day ’s headline on the genesis block, “The Chancellor of the Treasury is preparing for the second emergency bank financial assistance”; until now, we are still on the chain Find this trace of Satoshi Nakamoto. 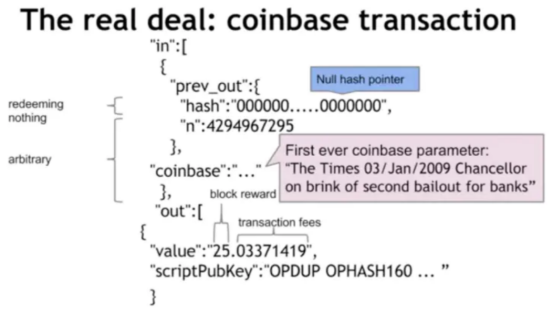 On January 4, 2009, Satoshi Nakamoto wrote a CoinBase message on the genesis block

Because of these characteristics and precedents, over the years, people have used a variety of information coding methods to leave a variety of content on the Bitcoin blockchain. There are boring, suspicious, purely angry, and romantic … … even memorable. Gradually, leaving messages on the Bitcoin network has become fun and romance for cryptocurrency lovers. Colorful miners leave a declaration of love on the Bitcoin blockchain on May 8, 2014

The widely circulated message is a sentence left by the founder of the fish pond, the colorful angelfish, in the coinbase transaction at block height 258692-"hand of the child, old with the child. Godfish to Dongdong". The domain enthusiast gave the message to his fiancee at the time as a new wedding; and even more rare, the beneficiary of this transaction was an address starting with "1LoveYoU". Shenyu said in an interview, "I didn't buy a diamond ring at the time, so I took this block as a diamond ring, because I think this may be more eternal. As long as the Internet exists and human civilization exists, this vow will never disappear."

However, compared with Xiu Enai, cursing information is more common in blockchain messages. According to incomplete statistics, words that begin with F appear thousands of times on the chain, and appear as often as Satoshi Nakamoto. It is also worth mentioning that in addition to text messages, many people will digitally doodle or sign on it; through the website Masses from the Mines, we can see the paintings left by fans on it.

Just like Satoshi Nakamoto's original intention to create Bitcoin, in a decentralized blockchain network, no matter how boring, rough, deep, or even sensitive the topic or information, it can be permanently stored on the chain without review and exemption Removed.

The Standing Committee of Hunan Provincial Party Committee held a meeting to emphasize the promotion of the deep integration of modern technologies such as big data, artificial intelligence and blockchain with social governance innovation