The reason why Bitcoin is fascinating, in addition to its own decentralized characteristics, as well as the background and timing born of the financial tsunami, may also be related to various interesting news circulating on the Internet. For example, we will tell today the story of self-redemption with the help of Bitcoin.

Around 2014, a netizen named Daurgothoth described his depressive life in the recent period on Reddit. He said that in the past few years, his extreme distrust of American politics, the public education system, and the centralized economy have plunged him into depression and anxiety. Combined with the education system, it makes people very depressed, anxious, and easy to become paranoid. Not to mention how ridiculous and dramatic the political environment is now. " 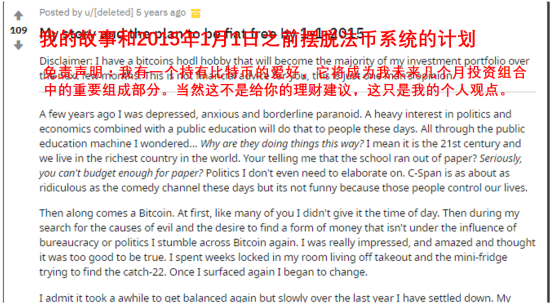 Fortunately, Daurgothoth seems to have found a new direction after encountering Bitcoin. At the beginning, Daurgothoth, like many people, did not spend much time to understand Bitcoin; but when he was looking for a currency form that was not influenced by bureaucracy and politics, he discovered Bitcoin again and was deeply affected by it. attract. According to Daurgothoth, since learning about and owning Bitcoin, he no longer fears the ignorance of the world and those crazy powers. Bitcoin is the ultimate weapon in the mind of this netizen who is eager to burn the Federal Reserve and destroy the Capitol. But then Daurgothoth also frankly, this is just his desire to change the world when he was young.

Although the idea of ​​trying to defeat the government system gradually dissipated as an adult, Daurgothoth still didn't believe in these centralized systems, and the emergence of Bitcoin became his exit to find new ways. To this end, in the second half of the article, Daurgothoth made an imagination of a "zero-fiat world" and set up a Flag, demonstrating his determination to completely escape from the fiat currency system before January 1, 2015; "I will accept Bitcoin, I will pay my bills with Bitcoin, I will invest in Bitcoin, and stick to my Bitcoin investment … strive to achieve a pure Bitcoin revenue stream next year. "

Daurgothoth's ambition and story have been endorsed by many netizens. Sovereignlife said that in his opinion, Daurgothoth was young and idealistic, but 65-year-old Sovereignlife agreed with his views; while netizen ferretinjapan comforted Daurgothoth not to be hurt by bad reviews and encouraged him to stick to his own ideas.

But Daurgothoth's story ends here. In the end, if he insists on his own ideas and how his “zero-fiat life” is going, everyone has no way of knowing it; because shortly after posting this post, Daurgothoth used his Reddit account deleted.

Past review: (59 ) Those who leave a message on the Bitcoin blockchain
Next notice: (Sixty-one ) In order to propagate the project to Everest, it will eventually lead to tragedy?
A collection of bitcoin story series you don't know, will be continuously updated, so stay tuned …