You may be familiar with the name Ethereum 2.0. Ethereum has an important position in the blockchain community, and Ethereum 2.0 directly affects the future of Ethereum and even the blockchain. However, what exactly is Ethereum 2.0? To be honest, it is not easy to answer this question clearly. Nevertheless, in this article, we still want to give it a try.

The Ethereum community is lively, and almost no blockchain community can match it; most of the tokens and smart contracts are running on Ethereum. For most developers and companies in the blockchain field, Ethereum Fang is also their first choice. However, the current state of Ethereum is still far from its ambition. In other words, the expected ecology of Ethereum has not yet formally appeared. In the final stage of Serenity (silence, meaning wisdom), Ethereum will be officially converted into a PoS consensus mechanism, showing its final appearance.

However, the road to tranquility is long.

In practice, the transition from Ethereum 1.0 to the final Serenity phase includes a series of hard fork plans. But because the complexity exceeds expectations, this process is time-consuming and laborious. The community used "Ethereum 2.0" to describe the goals and approaches to achieve.

Ethereum 2.0, or ETH 2.0, you should have seen this term in many blockchain media. Hundreds of articles mentioned Ethereum 2.0. But there are not many articles that are satisfactory: some articles are too simple and general to provide specific information; others are too professional and detailed, making it difficult to read. I hope to use this article to describe Ethereum 2.0 clearly. It is worth reminding that this article contains the current understanding of Ethereum 2.0, and this information may be updated at any time.

The primary reason is: the current Ethereum is too slow. Many complex applications want to expand their scale at a very expensive price. Comparing Visa's credit card processing capabilities, we know that Visa can process thousands of transactions per second, while Ethereum can only process 15 transactions per second. Ethereum is slow because it is a decentralized architecture, and it needs to continue to maintain a decentralized way.

So how to improve? One possible way of thinking is through the way of super nodes: users can rely on super nodes, that is, "consensus nodes". The consensus node has a sufficiently powerful server to handle all transactions. This solution is simple enough to keep the blockchain intact. All you need to do is increase the concurrent processing of the client machine. However, the developers of Ethereum rejected this option, mainly worried that it would damage the decentralization of the blockchain and its ability to resist censorship. We have long been familiar with the assertion of the impossible triangle of blockchain: decentralization, scalability and security, we can only choose two of the three, not both. How to break the impossible triangle is what all "second generation blockchain" projects want to try. For example, IOTA claims to be able to solve this trilemma. Most solutions, including Ethereum 2.0, try to replace PoW's mining mechanism with other consensus mechanisms.

Therefore, the original design of Ethereum was more or less regarded as a failure. According to Chromatic Capital, Ethereum 2.0 is "a completely different project, adopting a paradigm from 0 to 1, just like the slave chain of the blockchain." Ethereum 2.0 is not just an upgrade of the original version, but The Ethereum blockchain has been completely transformed. The design purpose of Ethereum 2.0 is to make Ethereum safer and expand its processing capacity to cope with thousands of transactions, and at the same time improve its programmability. More critically, these improvements will not harm Ethereum's decentralization. How does Ethereum 2.0 plan to solve this problem? For the classic triangular impossible triangle problem, Ethereum 2.0 intends to solve it with three improvements: 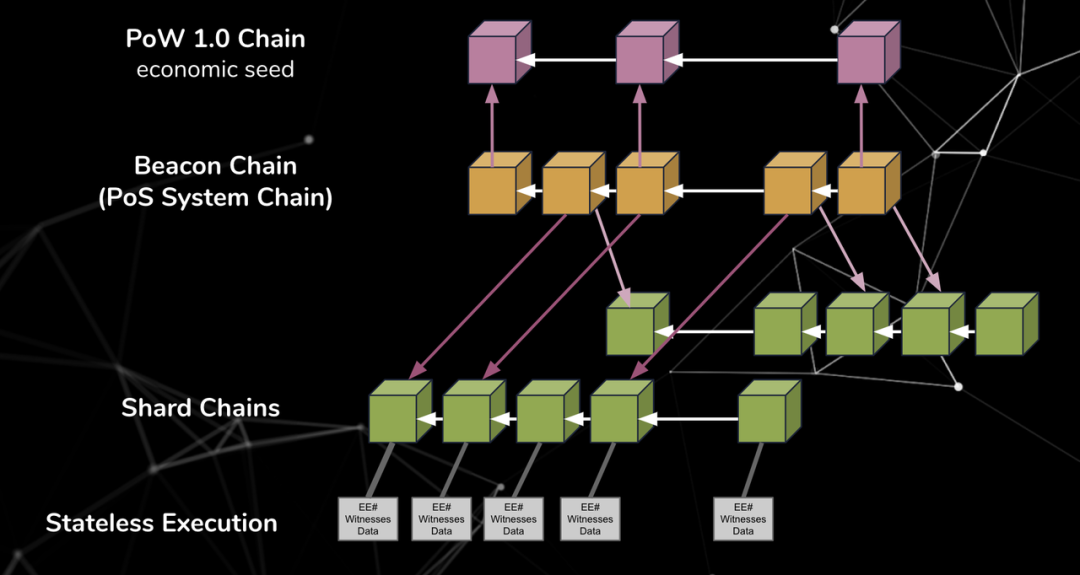 Sharding (Sharding) is a technical means to cut the database on multiple servers, in other words, to partition them. Just as a computer has multiple partitions on the same hard disk, the blockchain can also be divided into several parts without compromising data consistency. Sharding has the same security as the entire system without risk due to sharding.

Under the PoS consensus mechanism, miners are no longer required to create blocks. In Ethereum 2.0, the pledge validator (Staker) will assume the responsibility of producing blocks: these nodes need to pledge a certain amount of ETH. Compared with the PoW consensus mechanism, the PoS method not only saves energy, but also improves the transaction speed, and also makes the distribution of pledged validators on the blockchain more decentralized. Over the years, Ethereum's blockchain developers have been committed to implementing a unique consensus mechanism that can ensure that transactions are completed quickly and that participants can abide by the rules. With the help of the PoS proof-of-stake mechanism, Ethereum's transactions can be completed in a few seconds and can resist 51% attacks. New virtual machine design With the help of the new virtual machine design, developers can create their own execution environment. This allows the introduction of other blockchain rules on sharding. For example, developers can introduce BTC or Zcash rules to Ethereum. Therefore, Ethereum can become a common framework for different blockchains. I have to say that each of the three goals of sharding, PoS consensus mechanism, and new virtual machine is a very big idea. So far, the blockchain sharding function has not been implemented, and many wise thinkers in the community are also debating whether the PoS consensus mechanism is really effective. Ethereum personnel are working on solving multiple challenges of blockchain development, and are committed to creating a suitable architecture to break through the constraints and compromises faced by existing blockchain development and make these issues a thing of the past.

Second, the development process of Ethereum 2.0

Next, let's sort out the several stages that Ethereum needs to go through to evolve to Ethereum 2.0.

The beacon chain will adopt consensus rules, sanction dishonest pledge validators, and act as a link hub between different shards. Verifiers of Ethereum 2.0 voted through the proof-of-stake mechanism, that is, using the tokens they hold, voting on a structure called "certificates". Once the shard chain obtains enough "certificates", it will obtain a crosslink relationship on the beacon chain. From this moment on, the block gains ultimate stability and can no longer be revoked or tampered with. On the shard chain, the block has the same security as the block on the main chain, which is the beacon chain. This process seems to remind us of Ripple's consensus mechanism and IOTA's plan: let the nodes on the network vote on the block in some way. The pledged verifier pays labor and will also receive a corresponding reward: they will receive ETH2 in return, which is the local token of the beacon chain.

In the long run, ETH2 will replace ETH tokens. There is no limit on the total amount of ETH2 tokens. In this way, tokens are distributed to validators who maintain the operation of the blockchain, which brings long-term security to the blockchain. Beacon Chain is scheduled to go live in the second or third quarter of 2020. This will start stage 0 of the transition to ETH2. The user can run a beacon chain client and pay ETH (now called ETH1) to the beacon chain. On the beacon chain, it will be switched to ETH2. This is a one-way exchange method, ETH1 will be destroyed.

Therefore, if stage 0 succeeds, there will be two Ethereum blockchains: Ethereum 1.0 and Ethereum 2.0, or ETH1 and ETH2. For users, Ethereum 2.0 has no meaning at this time, because there is no shard chain that can be linked to the beacon chain. At this stage, the beacon chain is still a skeleton without a body, or you can think of it as the keel of a big ship, the bracket of a house.

Phase 1: The shard chain will probably start in 2021, and the first batch of shard chain will be online and put into use. These shards will initially store data in raw form. They cannot process data according to certain consensus rules, or even display the account balances of users or addresses. They are only used as experiments to test the effect of sharding, but they may also be used to store data to help DApps better To expand. The focus of Phase 1 will be around the beacon chain.

It is a huge challenge to establish and run a new PoS consensus mechanism and set up a blockchain as the control center for various data links. If you want to develop Ethereum 1.0 to this stage, there will be hundreds of details to be discussed, and there will be countless large and small updates that need to be implemented. But with regard to phase 1, we only need to know some of them at present. At this stage, the Ethereum 1.0 and Ethereum 2.0 blockchains will continue to operate in parallel. From the second stage, things will become very exciting and more interesting.

According to the roadmap, the next stage will "realize the real vision of Ethereum 2.0": let the sharding chain be able to process transactions. From this stage, the Ethereum 2.0 network should be available for practical applications. In the follow-up process of the project, the smart contract will also be activated in the shard chain. Then the execution environment provided by the new virtual machine mentioned above also came into effect, which allows activation of its own rules on the shard. For example, to simulate other blockchains, such as Bitcoin, Zcash or Ethereum 1.0. Just as Ethereum 1.0 implements smart contracts on the blockchain by abstracting Bitcoin, Ethereum 2.0 will also abstract Ethereum 1.0 and redefine the basic nature of blockchain computing.

Phase 2 will combine the functions of all chains. In Phase 1, the sharding chain was purely data storage, and is now becoming a structured chain, linking the state of smart contracts to the consensus process. Developers can create their DApp on a shard, and Ethereum has become a multi-chain system controlled by a beacon chain. The second phase is expected to be completed by the end of 2021 or early 2022. According to the roadmap, many parts, such as the conceptualization of the execution environment, are "still in deep research and development."

According to the plan, Ethereum 2.0 will be launched in 6 stages. However, according to the roadmap, starting from stage 3, any type of prediction is speculation because it is likely to change. At some point during these stages, Ethereum 1.0 may gradually fail because no one is involved. Of course, if the plan advances, or when Ethereum 2.0 replaces the original Ethereum 1.0 blockchain, all users and Ethereum tokens can be migrated to the new blockchain. However, all this has not been decided yet. For these stages, in the Ethereum Github file library, it is described in an open way:

Implement light clients. This may be done to reduce the size of the Ethereum state data that each node must carry, but it does not completely eliminate these states.

Transactions can be shared between different shards.

Shards will continue to contain shards, and a single shard chain may become a beacon chain of its child chains in the future. However, more specific information about these stages is still missing, and there are only some highly abstract papers or only a few words from online seminars. What is the specific form of Ethereum 2.0? So far, there is no clear definition. Therefore, it is expected that the quiet phase of Ethereum may take some time-such as 4-5 years, or even longer to complete.

Disclaimer: This article is the author's independent point of view and does not represent the position of the blockchain research community (public account), nor does it constitute any investment opinion or recommendation.

Bakkt Bitcoin futures contract traded at a record high of 1,756

In the next 6 months, an Australian company will submit a Bitcoin ETF application to the country’s stock exchange