There is a rule in the "Wolfman Kill" game. "Wolfman" can kill people at night in the night. In the daytime, he can evade the identification of "civilians" through eloquence, and eventually win the victory of all "civilians" on both sides.

In the past two days, DApp has produced a real version of "Wolfman Kill". A DPC called TronBank Pro was ransacked by 26.6 million TRXs, and the project investor "civilian" suffered nearly 5 million yuan in property damage. However, who is the "werewolf"? The community has started to have a heated discussion.

So far, there have been three seemingly plausible story lines:

The PeckShield digital asset tracking platform is involved in this major "security incident" on the Tron platform (two types of accidents: one is a natural disaster, one is a man-made disaster), and the tracking restores the ins and outs of things, as much as possible through technical analysis. The victim "civilian" finds the truth.

As for the following, it is about natural disasters or man-made disasters, leaving the readers to judge for themselves.

Friends, have you heard of TronBankPro? A blockchain investment product with a fixed daily income of 1.8% – 4.8%, our contract code is open source, and the contract is verified by the "well-known" verification agency tronsmartcontract.space (TSC) and the data on the chain. Although we were attacked by the BTTBank counterfeit currency incident, we are a responsible team, we will not, run the road…

Xiaobai investors believe that since the TronBank team had a security incident before, it is necessary that the contract review work should be done this time. Users can see from their official website that the team is still doing things, compared to other For the open source DApp, the project party actually announced the source code, "still trustworthy." 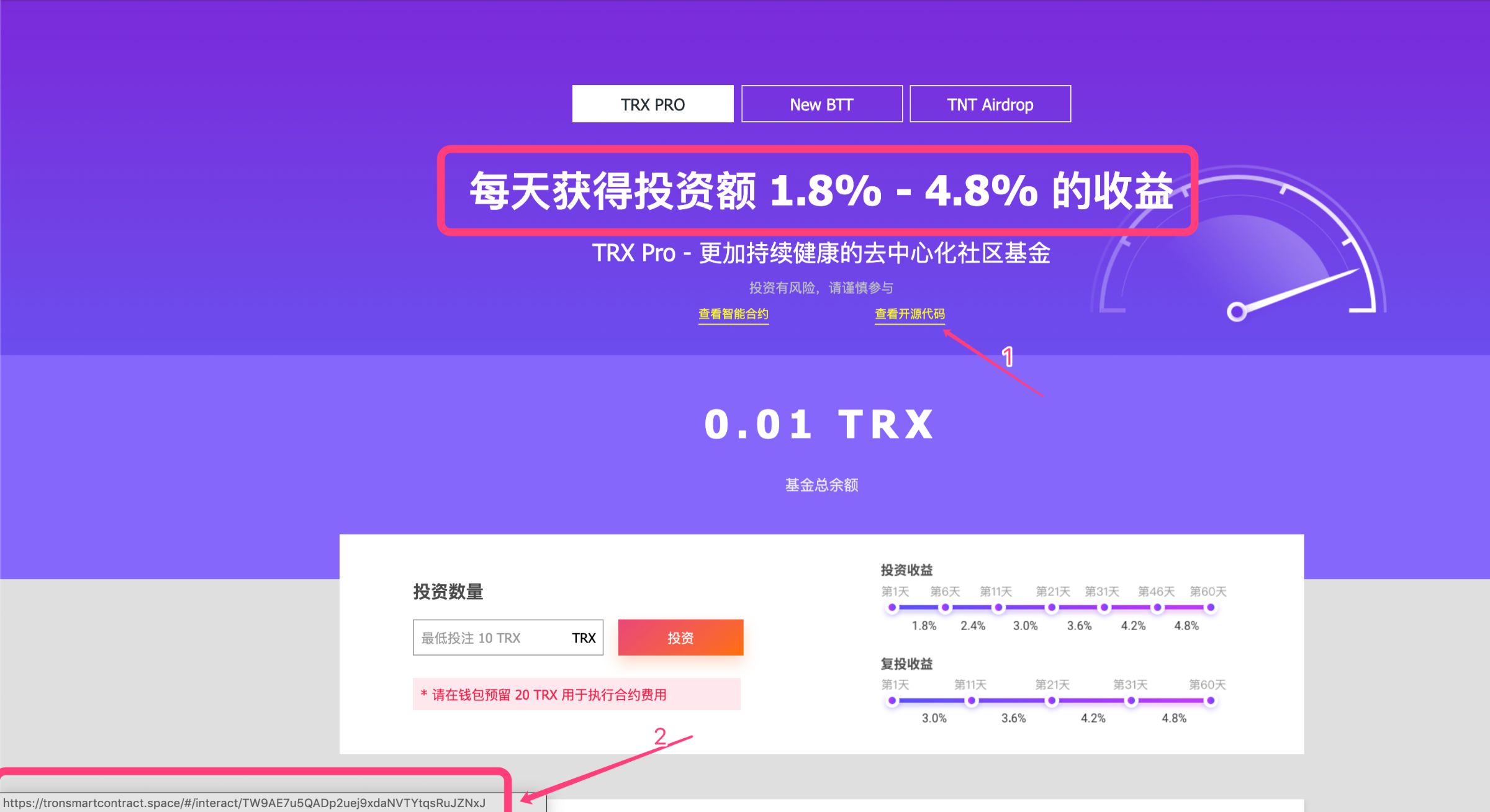 Due to the lack of an official certification platform, some DApp developers have a “responsible to the user” attitude. Most DApp contracts on the Tron platform use the contract consistency check service of the third-party platform TSC (currently Tron officially does not introduce such a standard. Service, only available in the market https://tronsmartcontract.space). In-depth analysis by PeckShield security personnel found that TSC can help DApp developers verify some basic security guarantees, but the TSC service code itself is not complete enough to guarantee the reliability of the verification results. Of the 278 contracts that TSC has approved so far, the contract source code is only 85 consistent with the Tron chain, and the unqualified ratio is as high as 70%. How can such a high percentage of disqualification be recognized by users and DApp developers? ?

After the PeckShield security personnel contacted the TSC developer, the other party also admitted that the service was still in the early stage of construction and could not guarantee the reliability of the audit results. In addition, Tron officials did not acknowledge, nor recommended that the community adopt and trust the verification results of tronsmartcontract.space, see Tron Sun's Weibo content: 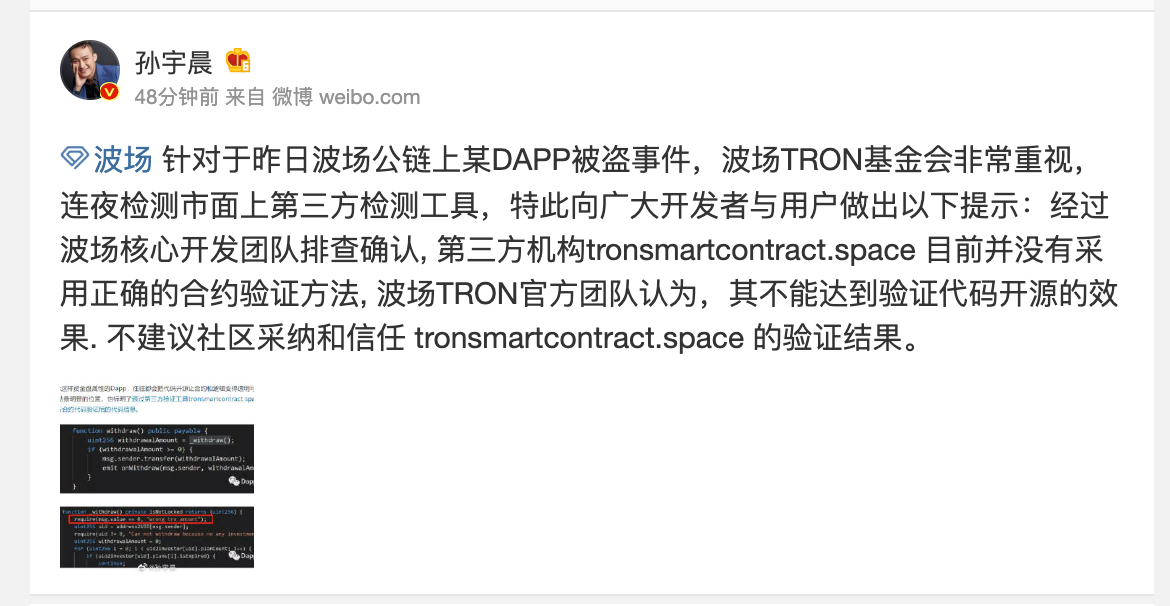 PeckShield security personnel analyzed the TSC official website to find out if there was any hacking clues on the site. When accessing the site's "contract verification" function, it was found that TSC was shut down for some reason at this critical time. After PeckShield security personnel and TSC maintainer KhanhND69 asked about the matter, the other party said that the previous audit log was recently deleted. The "contract verification" function was closed due to the current development of the new version of the feature, this old feature has been offline. As for when the new features are online, the other party did not expressly indicate.

As for whether the TSC statement is logical, whether the motivation is simple or not, it is reserved for the readers to taste.

Since TSC is just an "independent" code verification platform, what does he have to do with TronBankPro being stolen? 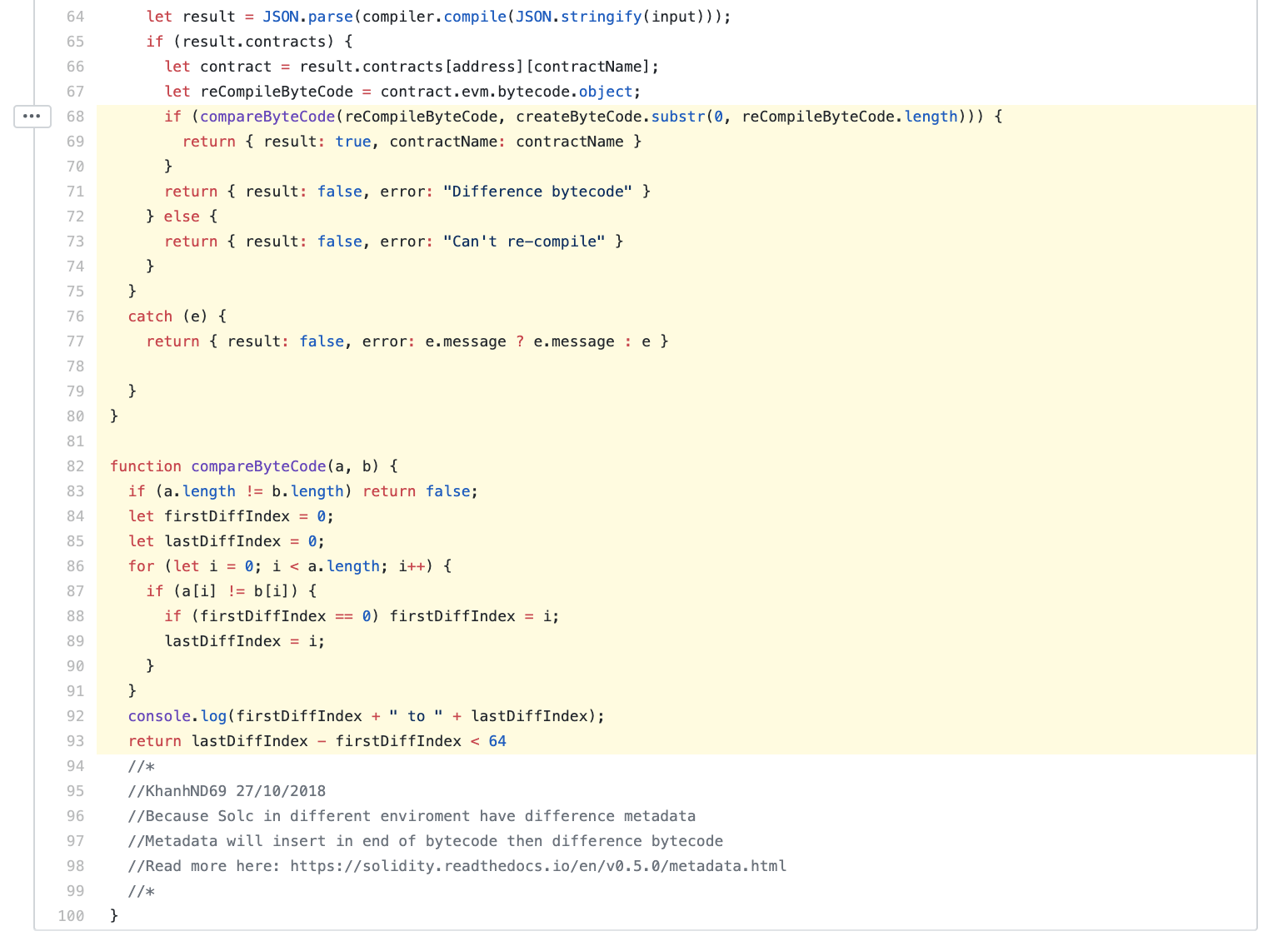 It can be known that the verification process is as follows:

The above verification process is simple and practical. Xiaobian has re-verified the TronBankPro contract, which is the TSC open source TW9AE7u5QADp2uej9xdaNVTYtqsRuJZNxJ source code, and found that the two cannot match, the difference is very large, it is impossible to meet the conditions in the code. .

Here, Xiao Bian thinks that TSC is very likely to not follow the routine in this "accident" (what is the routine? I don't understand, manual black face).

It’s dark, everyone please close your eyes, the werewolves come out to kill…

Careful analysis of other address information with TTX5N… This address, found some interesting stories, please listen to Xiaobian slowly.

The timeline of the entire "accident" is roughly divided into several parts:

Look at the official, please see the complete storyline: 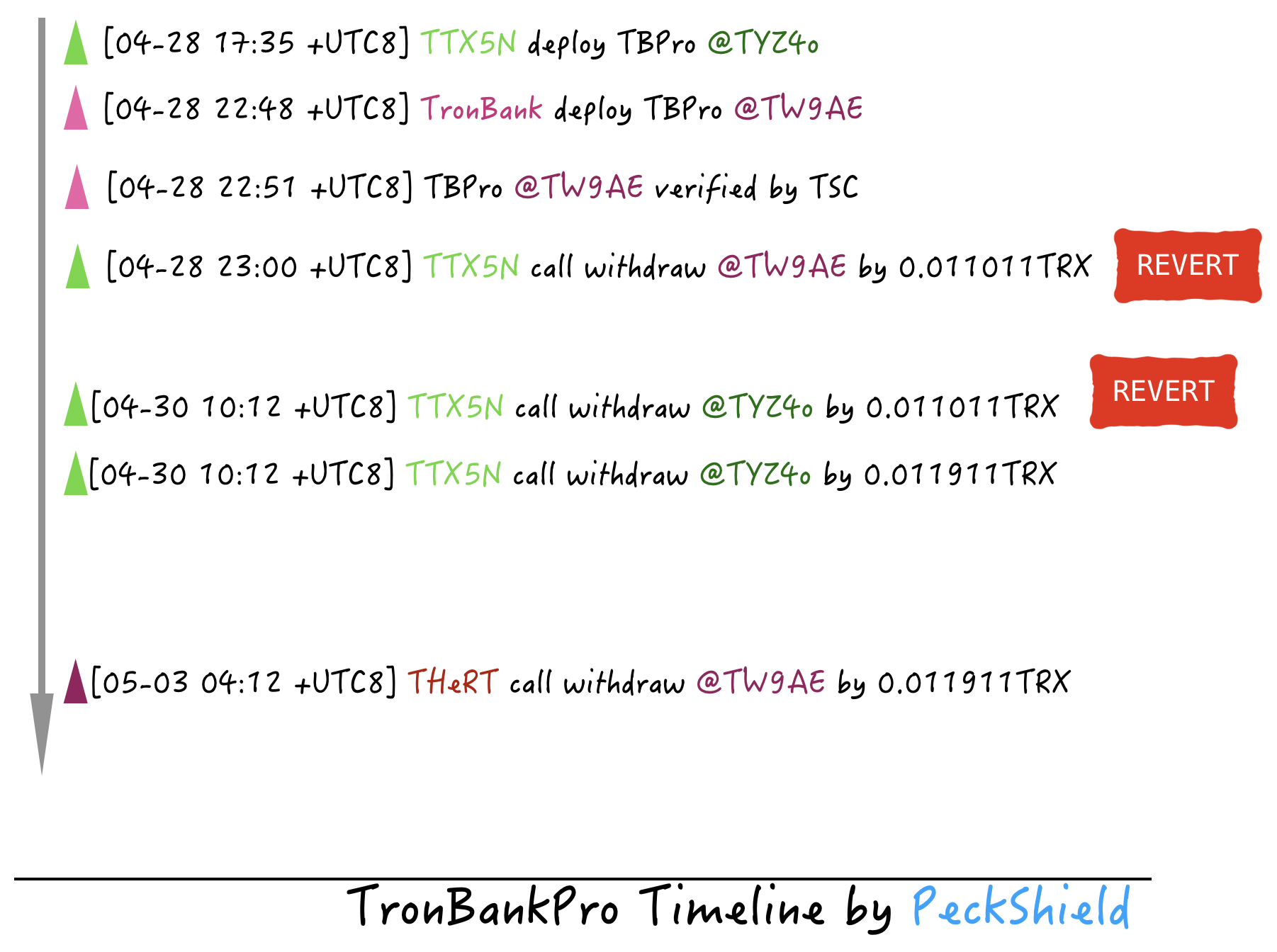 Waiting for user investment to swarm, the contract funds pool has grown.

At this point, it seems that there are not many stories happening, but the good show has just begun…

5.1 Holidays are always so rushing. In the time when Xiaobian is still at home, the TronBankPro contract has attracted nearly 1600+ users with nearly 30,000,000 TRX investments:

Seeing that it is in the harvest period, 05.03 04:12 +UTC8 has a hacker named THeRTTCvN4SHEVYNqcLVLNGGVsWLR4smyH. By the same operation as TTX5N2wxLeyWBSNE6UeaBjCFZbpa2FH6jr (withdraw() carrying 0.011911TRX), it is half-cut and successfully retrieved 2600W+TRX . As for who the wojak hacker is, no one knows it. The specific transaction hash is as follows: 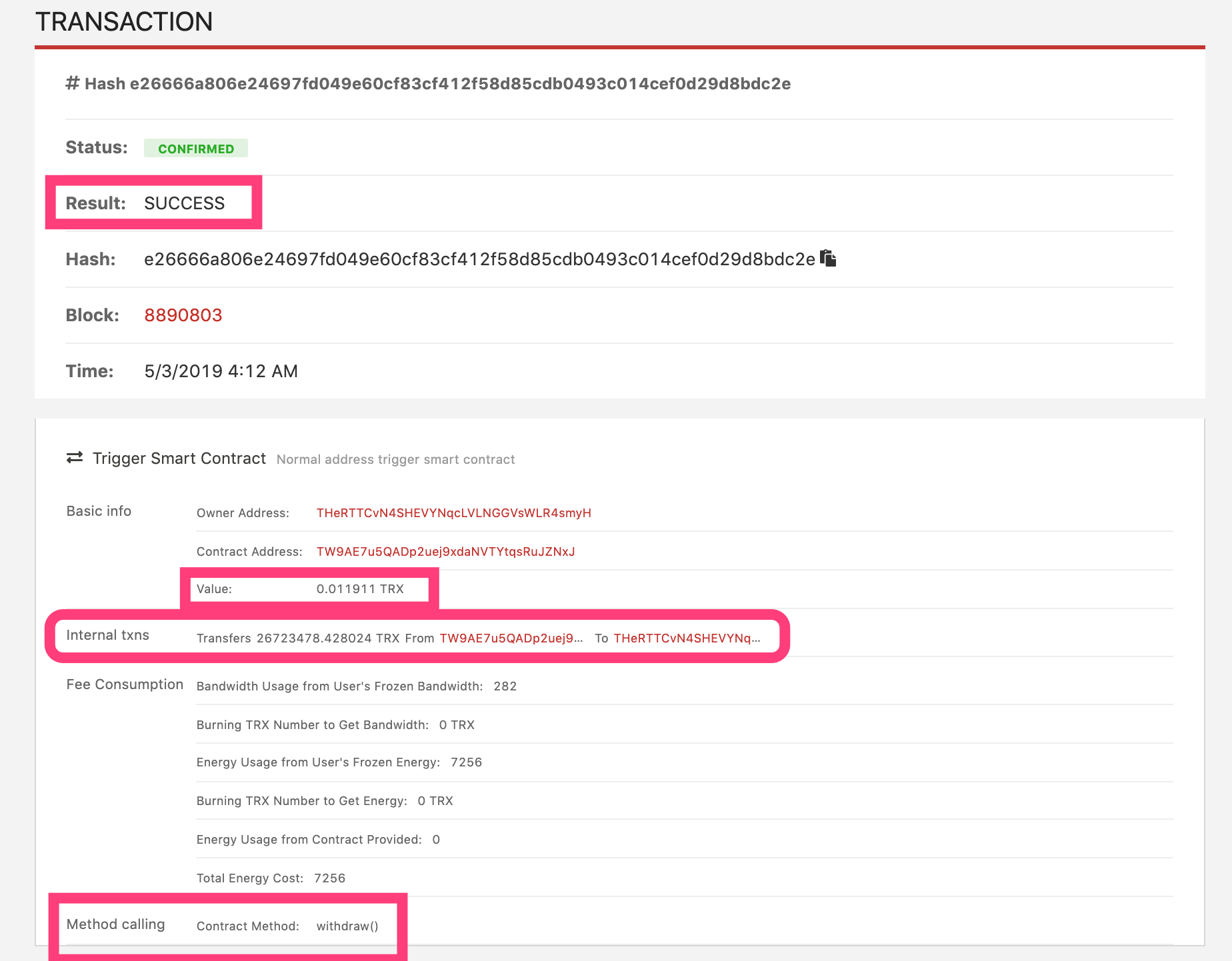 Based on this, PeckShield security personnel believe that the TCK TTX5N2wxLeyWBSNE6UeaBjCFZbpa2FH6jr deployment of the TYZ4oPdPmwZS9xTUXhnFtQkPFFTi2iAydz contract and the TronBankPro deployment of TW9AE7u5QADp2uej9xdaNVTYtqsRuJZNxJ contract have backdoors , as to how the back door is inserted, who is inserted, it is not known.

After the PeckShield security personnel reversed the TYZ4oPdPmwZS9xTUXhnFtQkPFFTi2iAydz and TW9AE7u5QADp2uej9xdaNVTYtqsRuJZNxJ contract reverse code, the following piece of code was found in the withdraw() logic: 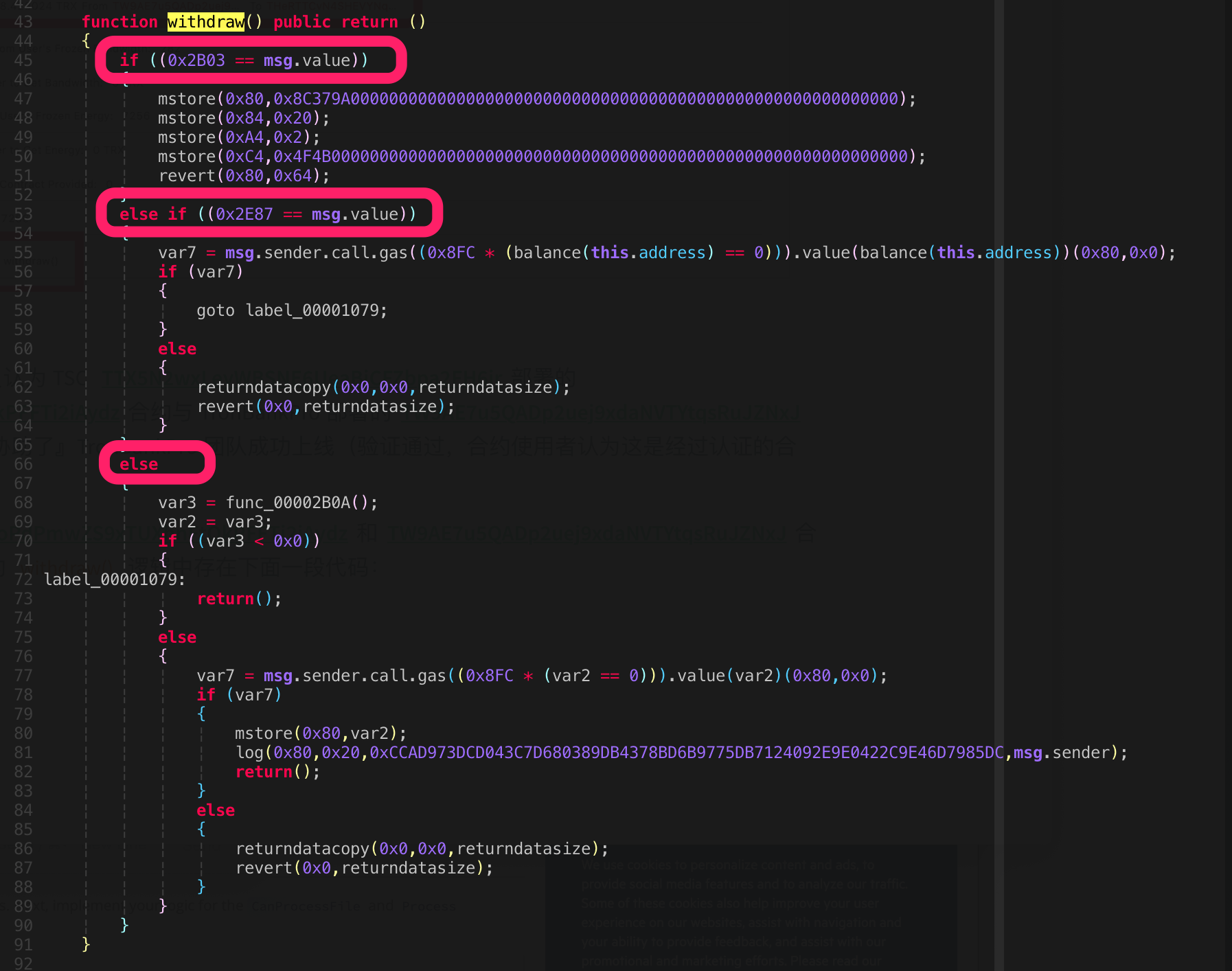 It is not difficult to see that withdraw() is divided into three cases according to the size of TRX carried by msg.value:

Under this branch, the status is not changed, the transaction output is OK, and finally exits with REVERT. This behavior is consistent with the return information of the above transaction. PeckShield security personnel believe that this branch code is the debugging function deliberately left by the developer to confirm the contract. The logic is in line with expectations.

Converting 0x2E87 in hexadecimal to decimal is followed by 11911 Sun (since TRX == 10^6 Sun), equivalent to 0.011911TRX. This value is equal to the value of the TTX5N2wxLeyWBSNE6UeaBjCFZbpa2FH6jr and THeRTTCvN4SHEVYNqcLVLNGGVsWLR4smyH calls.

Under this branch, all the TRX balances in this contract will be transferred to the call initiator, nothing left.

Here, PeckShield security personnel believe that the "misoperation" returned by the above 0.011011TRX with REVERT is actually the test before the hacker attacks.

After the hacker THeRTTCvN4SHEVYNqcLVLNGGVsWLR4smyH gets 2600W+TRX, it starts to transfer assets in batches:

The analysis of the above pure technology shows that two points have been fully verified:

Of course, even if PeckShield has already tracked the ins and outs of technology through technology tracking, in the virtual world of the blockchain, it is still difficult to determine who is the werewolf in this "wolfman killing" drama. Before the project party does not pay for the damage funds, it is difficult to escape the responsibility; the third-party service platform TSC is currently the biggest "ghost", but is the relationship with the project party really clear? As for the arbitrarily and somewhat irritating hacker wojak, is it really a person, or is it just a small vest in the whirlpool? Who can tell the truth and make it clear?

The code is verified, and it is human nature that cannot be guessed!