These more than 40,000 participants have one thing in common. They are all Berkshire shareholders. More famous than the company, perhaps the legendary manager behind him – Warren Buffett and his partner Charlie Munger.

The 88-year-old Buffett and the 98-year-old Munger are on the stage. In front of Buffett’s favorite Coca-Cola, the two idols of global investors used nearly six hours to answer questions from investors from all over the world. Keshi’s decades-old shareholders also have 11-year-old boys from China, and the audience also includes Apple CEO Tim Cook.

At the beginning of May each year, Buffett’s Berkshire company will hold a global shareholder meeting. This company meeting, which was initially attended by only a dozen people, has become the annual carnival of global financial people. The three-day, rich agenda and most important aspects It is the Q&A session between Berkshire CEO Buffett and partner Munger. In this session, the idols of two global investors will answer questions from investors from around the world.

Quick view of the golden sentence

We missed Amazon. Later, when we decided to invest in it, we valued its value. We still insist on value investment.

Virtual currency won't have a good ending. Bitcoin is a gambling thing. There are a lot of frauds related to it, and it doesn't produce any value.

China's market is relatively young, but it is also a huge market. We like big markets. Berkshire has done a lot in China, but it has not done enough, and may make some big deployments in the next 15 years;

I hope that Apple's stock will fall so that I can buy more of its stock;

I am very fortunate to be able to control my time in life and have enough money to do what I want to do. I hope to live longer with Munger.

The heir is not sure, bitcoin is gambling, regrets missing Google

Before the start of this year's shareholders meeting, the financial industry summed up the most concerned issues, and throw them one by one at the conference.

In the nearly six hours of question and answer, Buffett and Munger expressed their views on issues such as Apple, Amazon, 5G, China market, and the US economy.

The first question asked was the successor. In recent years, the shareholder meeting, the heir is a question that Buffett will be asked every year. After the opening of this year, a 20-year shareholder of Berkshire asked Buffett whether he could talk about his heir plan and whether he would consider inviting two young deputy directors to take the stage to preside over the shareholders meeting. The two associate directors refer to Ajit Jain and Greg Abel. In 2018, they were appointed as the vice chairman of Berkshire and were regarded as the candidate heirs of Buffett.

Buffett did not answer this question positively. "This is a good idea. We can discuss it. This form has not been completely determined, because I am afraid that Charlie and I are too shabby in front of them. These two people look so good. And the form hosted by Buffett and Munger is unlikely to continue. "The 88-year-old Buffett will leave the company to whom is still a suspense.

The second important issue is about Amazon's investment. Buffett is known for his investment precision, but when he makes mistakes in his career, the typical case is Amazon and Google.

At last year's shareholder meeting, Buffett reflected on his own missed Amazon. Although Buffett has repeatedly expressed his optimism about Amazon and Bezos, he has never bought Amazon stock. This week, Buffett said in an interview with CNBC that Berkshire bought Amazon's stock and bought it as "a colleague who manages funds in the office."

According to Amazon's earnings report, it is indeed an object worth investing. In the first quarter, Amazon's net profit reached $3.6 billion, while the cloud services business continued to grow at a high rate. At the shareholders' meeting this year, the 13th questioning shareholder asked whether investing in Amazon meant a change in Berkshire's investment philosophy, from value investment to price investment.

Buffett believes that investing in Amazon is very valuable. "We are more valuable when we make this decision. Of course, I am looking at other companies, and I am looking at equity, capital, etc., and our intentions have not changed much."

Compared to missing Amazon, Berkshire’s bigger loss is to miss Google. Munger bluntly blamed himself for missing Google. "Do you mean that we really messed up?" Buffett joked.

Despite missing Amazon and Google, Berkshire’s investment in Apple can make up for this regret. Among all Buffett investment projects, Apple is perhaps the most favored one. By the end of 2018, Berkshire held more than 250 million shares of Apple, accounting for 5.7% of Apple's total stock, which is currently the highest position in Berkshire. Individual stocks have a return rate of 27.4% a year.

"I hope that its (Apple) stock will fall," Buffett said. "This way I can buy more of its stock."

What has not changed is Buffett’s attitude towards Bitcoin. At last year's shareholders meeting, Buffett bluntly said that "virtual currency will not have a good ending." Before the start of the shareholders' meeting this year, Buffett told reporters that "(bitcoin) is a gambling thing… there are many frauds related to it, no Produce any value". At the meeting, Buffett bluntly stated that "bitcoin is a way of non-humanization."

In addition, Buffett said that Berkshire's subsidiaries will be involved in 5G or any technology development industry in the world, but the head office will not interfere too much with the subsidiary business. “The world will change dramatically, some of which hurt us, but we welcome change.”

China is ready to welcome Buffett

The most concerned issue for Chinese shareholders is Buffett’s view of the Chinese market. Every investor wants to get some guidance on investment directions from Buffett. In the past, Buffett did not invest much in China. The most famous cases are PetroChina and Geely.

Before the opening of the shareholders' meeting, "First Financial" reporter asked Buffett when he would go to China at the event venue, and Buffett replied "If there is a good project, go." When asked about a specific company, he said: "Some Chinese companies are very interesting. They can't be disclosed now. I will tell you in a few years."

Some investors asked Buffett at the shareholders meeting, whether there is a plan to set up a company in China. Buffett said: "China is a big market, we like big markets. When there is no new opening and opening policy in China, we are already in contact with the Chinese market. Berkshire has done a lot in China, but it has not done enough, and may make some big deployments in the next 15 years."

At last year's shareholder meeting, Buffett showed an interest in investing in the Chinese market. "If I have $100 million, apart from China and the United States, I don't think about investing in other countries. The scale and geography are all things I want to consider." Buffett believes that China has many opportunities. "China's market is relatively young, but It is also a huge market."

The stock god has long been concerned about the Chinese market. In 2008, Buffett subscribed for 225 million shares of BYD. Compared with the HK$8 per share he bought, BYD's share price has reached HK$53.55 and the price-to-earnings ratio is 39.29 times. Last year, Buffett revealed the stock selection criteria in the Chinese market: companies with a return on net assets of at least 20% and stable growth can enter their research.

The history of the Buffett Shareholders' Meeting has been more than 60 years, and the initial scale is obviously not as spectacular as it is today.

Buffett has been in charge of Berkshire for more than 50 years, and has created huge profits for shareholders around the world by virtue of its investment strength. The first sentence of the many shareholders who spoke at the scene was to thank Buffett for his guidance and help in investing.

It's hard to have a similar financial industry event that can do the same atmosphere as a concert. Before Buffett and Munger debuted, the venue, which accommodated nearly 50,000 people, played a homemade video as usual, accompanied by lights, as if the opening of a rock star's concert. In the early morning of the event, someone had already set up a tent outside the venue. 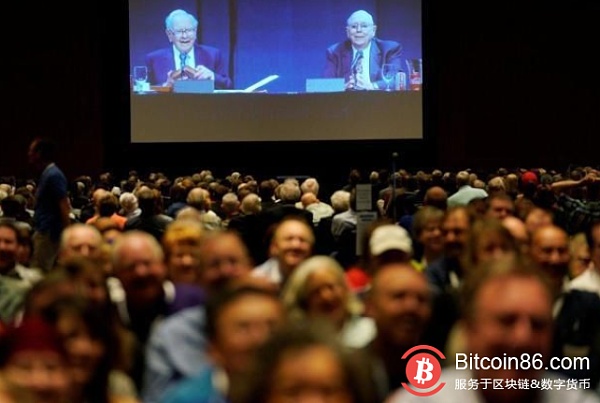 In the definition of the US media, Buffett's shareholders' meeting has become a veritable phenomena-level annual event. In recent years, more than 10% of Chinese participants have participated in the Chinese language as a translation language.

For financial professionals, the annual Buffett General Meeting is no different from a pilgrimage. The two age-old 183-year-olds on the stage have built the world's largest investment company in 54 years. As of the end of last year, Berkshire's value per share increased from $19 to $172,108, an annual growth rate of 18.7%, and a total return of 109,1899%.

Buffett’s influence on global investors is not only how to get more business returns, but also his attitude towards wealth and life. A young man asked, what is Buffett and Munger currently thinking about the most important thing in life?

Buffett joked that he hopes that he and Munger can live longer. But time and love can't be bought with money, and it's the most important. He is very fortunate to be able to control his time in life and have enough money to do what he wants. He and Munger are very fortunate to be able to do work that is not limited by physical aging. Munger also believes that the most important thing is to do what you want to do. (Fueling Finance)

Zhang Xiaojun, head of the blockchain at Wuzhen site, Huawei: Huawei will build a blockchain platform base in the future to achieve full cloudization, industry digitalization and large pipelines.

How to become a Bitcoin Core contributor? The most complete Bitcoin developer guide is here

Bitwise Global Research Director: Two cryptographic ETF proposals have been submitted to the SEC and are expected to be approved on October 14.