In the face of the "American underworld behavior" of the spoiled rogue, this time, Bitfinex is ready to use IEO to solve this urgent need.

In fact, before the May 1 holiday, there was already news that Bitfinex was preparing for IEO. During this period, in the face of the savvy but popular Bigfinex, there have been many hot discussions in the market. After all, Bitfinex has already touched the supervision of the mold, coupled with its nepotism with Tether, people are very curious about what Bitfinex's IEO will be.

In this white paper, Bitfinex does not hide its background in launching the IEO, that is, Bitfinex urgently needs a working capital period during the US$ 850 million freeze by the US government.

The source of this funding is the IEO project LEO to be released.

According to the white paper, the total number of LEOs issued is 1 billion. Unlike other cryptocurrency exchanges, such as currency security and fire coins, they use their own platform currency as the medium to collect their own platform coins. Conduct the IEO for each project.

Bitfinex raises USDT, but LEO is more like a coupon that can be withdrawn and can be up or down in Bitfinex.

It is understood that the goal of this Bitfinex is $1 billion USDT.

The goal is grand, but where is the value of LEO?

According to the white paper, first of all, LEO will have three ways to destroy. (This is similar to other currencies, controlling the supply and demand prices by means of repurchase and destruction)

With iFinex all services (including Bitfinex, Bitfinex Derivatives, Eosfinex, Ethfinex Trustless, etc. 10 businesses) last month's profit of at least 27%, in monthly units, based on the current market price to buy back LEO, no deadline limit.

It is worth mentioning that LEO is only limited to 90% by operating profit, and Bitfinex will stop buying back when there are 100 million LEOs left.

2, the frozen assets are thawed to trigger the destruction method

You know, Bitfinex now has $850 million in client funds frozen in the hands of governments, and Bitfinex plans to use at least 95% of the net amount of the thawed net (after deducting the law and the number of operations). Purchase and destroy the corresponding number of LEOs.

In order to avoid market volatility, once the funds are thawed, Bitfinex will complete the repurchase and destruction within 18 months after thawing.

Bitfinex intends to repurchase and destroy LEOs by returning at least 80% of Bitcoin's net assets in the future.

In addition to repurchase and destruction, the specific use of LEO is also reflected in this white paper.

According to the white paper, the use of LEO is mainly expressed in “concessions”. 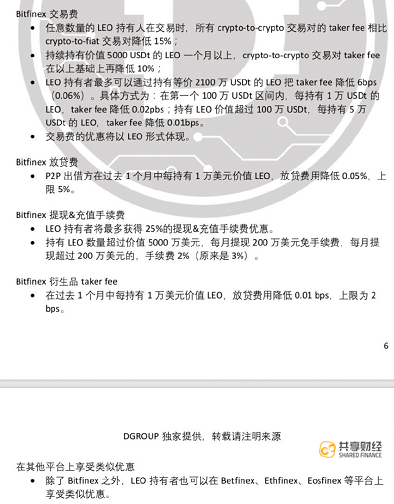 As you can see from the above chart, if you hold a certain number of LEOs, you will enjoy the transaction fee discount, recharge cash discount and lending discount. It is not difficult to see from this that in addition to the ups and downs and withdrawals, the launch of the LEO has become a similar coupon in Bitfinex.

It can be seen that whether it is from the repo destruction mode or the preferential mode, in order to raise the USDT and maintain the stability of LEO, Bitfinex can be said to be painstaking.

However, the premise is that the large amount of funds raised by Bitfinex is mainly to solve the problem of $850 million in losses. On this basis, Bitfinex will also allocate a new USDT of $1 billion.

In short, Bitfinex will fill the pit of the USDT raised by IEO at the same time, and at the expense of it, it will further increase the profit of iFinex and the unfrozen funds plus various discounts to achieve the purpose of protecting the LEO.

It is worth mentioning that, previously, USDT's general counsel said that as of April 30, only 74% of USDT was supported by statutory equivalents.

Now, according to the Omni browser, Tether has released 2.8 billion USDTs, which means that in order to restore the 1:1 anchor ratio, Bitfinxe still needs to pay $700 million to fill the deficit.

This can be seen as an exchange, just as bitfinex found that $850 million in funds was frozen, thereby blindly modifying the proportion of USDT anchored assets. The difference is that Bitfinex used its own way of thinking without telling the user. Nowadays, Bitfinex is more like a conspiracy. It is generous to tell you that I will use this money to fill the pit and restore USDT. The credit depends on the value of the investor who does not believe in LEO.

To this end, Bitfinex and iFinex announced the revenue of iFinex. 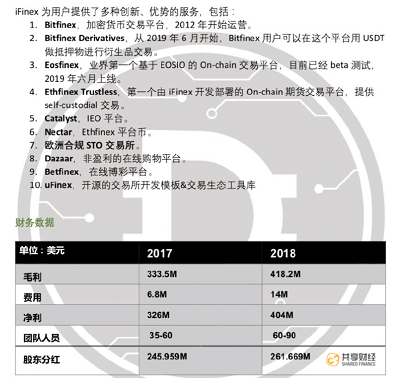 Of course, in addition to iFinex's profit distribution, in fact, the frozen $850 million is the basis for the launch of the IEO fund transfer.

If 850 million US dollars are not coming back, Bitfinex can only make up the money by means of equity-based dividends. If it is back, the process of LEO repurchase will undoubtedly be greatly shortened.

In addition, some people believe that Bitfinex still has the risk of remorse.

It should be known that in the event of an unexpected operation of funds, Bitfinex can change the terms "lively" and play the "equivalent exchange" method in the back. If other circumstances, Bitfinex can also reduce the repurchase ratio. Or split the company, remove the high-profit business and do not give LEO dividends and other means.

You should know that unlike traditional exchanges, cryptocurrency exchanges have always lacked the shackles of regulators. Bitfinex's ignorance of ignorance is a testament to the past.

In addition, Bitfinex, which is being watched by the US, has to carry out a $1 billion IEO in such a high-risk period, and it is still based on the USDT. This is undoubtedly a positive provocation to the regulators, and this is also Bitfinex. The biggest challenge currently facing.

It can be seen that, unlike the purpose of fundraising development of other projects, the emergence of LEO is actually to make a written dividend, and then give it some preferential characteristics while replacing assets, and this also includes The risk of not being underestimated.

For the entire market, Bitfinex is not very beneficial.

In response to the release of IEO by Bitfinex, Fundstrat co-founder Thomas Lee said in a tweet that "a $1 billion token supply may have a short-term negative impact on BTC and other cryptocurrencies because the market needs to absorb this supply. Unless the buyer is a newcomer to the cryptocurrency industry, this does not make sense."

Russia’s largest bank, Sberbank, has suspended its encryption plan due to the opposition’s opposition

Technician lost more than $30,000 in cryptocurrency due to private key theft

The data shows that BTC is steadily fluctuating, and the long and short forces tend to balance