In the opening year of 2020, due to the continued impact of the new crown epidemic, the global financial market has encountered a "black swan" and the digital currency market has also been hit hard.

According to the data of CoinMarketCap, the total market value of digital currencies ranked in the top 30 in March (based on the ranking on April 2) fell by 30% month-on-month, BTC fell by more than 10%, ranking sixth in the decline, and the average daily amplitude of the currency price exceeded 8 %. Not only that, the changes in the secondary market also triggered a series of chain reactions. For example, the shutdown price of a variety of mining machines has challenged the survival and development of the mining industry. The DeFi platform triggered the liquidation process to trigger a shutdown crisis.

Relying on crisis, what new changes are worthy of attention in the volatile market?

In this regard, PAData conducted its first observation of cryptocurrency TOP 30 this year, and the observation period was from January 1 to March 31. Earlier, PAData conducted four observations last year, and has observed the strong rise of platform coins in the "new" movement of the exchange. MKR has suddenly emerged from the bear market before the concept of Defi is not fired. Changes in minimum volatility, public chain currency riding policy, Dongfeng collective carnival, etc.

1. The total market value of digital currency in Q1 TOP 30 rose first and then fell. It fell 29.84% month-on-month in March, marking the largest month-on-month decline since June.

2. The market share of Bitcoin has declined, from 70.10% in January to 67.91% in March, the lowest percentage since June last year.

4. The two sector concepts of the Q1 digital currency market are "halving" and "platform currency", and BSV, DASH, OKB, and LEO have good gains.

In the first quarter of 2020, there are a total of three digital currencies with a new market value of TOP 30, which are the application token HEDG, platform currency OKB and stable currency PAX, ranking 22nd, 29th and 30th respectively. According to last year's observations, after the market enters the Mavericks market, there will be about 3 new digital currencies to enter the list, that is, 6 tokens will be newly entered into the list every six months, and the rotation rate is about 20%, and When the market is in a period of market turbulence, the breakthrough space of the long-tail token is very small, and the TOP 30 list has basically not been added. Judging only from the rotation of TOP 30 assets, the market activity of Q1 this year is comparable to Q2 and Q3 last year. This improvement in user fundamentals is more obvious on the Tezos network. According to the statistics of Coin Metrics, Tezos' daily active addresses have shown a clear upward trend since January this year. 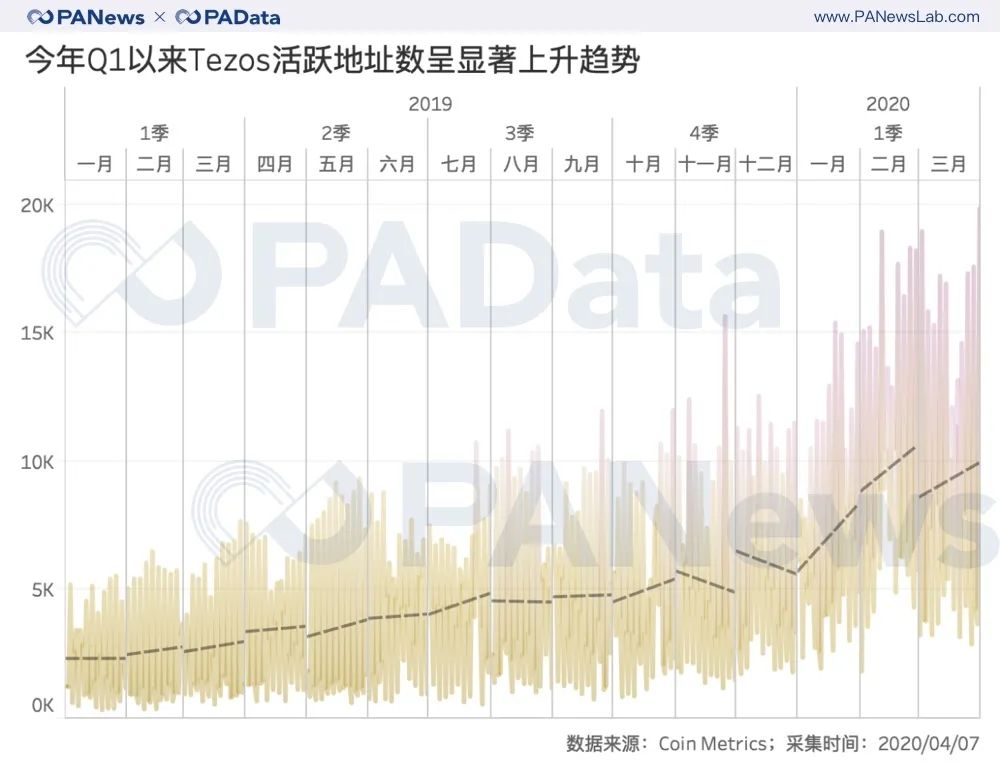 It is also worth noting that the market value rankings have dropped more digital currencies, ATOM, IOTA, NEO, TRX and MKR, which have fallen by 5 places, most of which are public chain tokens. The reason behind the collective diving still needs more observation, but it may be affected by the regression of the mean.

The main reason for MKR's plunge in ranking this time is the joint impact caused by the collapse of the digital currency on March 12. From the MKR tool, you can also intuitively see that the price of MKR fell linearly on the 12th, and the number of MKR After 20 days, it has been greatly improved many times. This is mainly because the self-recovery design of the Maker agreement was initiated, that is, to generate a new MKR and sell it in exchange for DAI in a series of reverse auctions to repay all debts, which also helps stabilize the price of MKR.

Judging from the type of digital currency with a market value of TOP 30, the market structure still maintains the form of public chain tokens and payment settlement coins, but compared with the previous ranking, platform coins and stable coins have achieved further expansion. This year is particularly worthy of attention is the platform currency. The current platform currency in the TOP 30 market includes BNB ranked 9th, LEO ranked 11th, HT ranked 17th, and OKB ranked 29th. Among them, LEO has risen by four places, which is the one with the largest increase in the ranking of platform coins. According to PAData's earlier valuation analysis of platform coins, LEO's currency price at the end of February was still lower than the value of last year's destruction of tokens, that is, its current valuation was also lower than the exchange's operating capacity (income) in 2019, combined From the performance of the first quarter, the market may be repairing this underestimation.

In addition, OKB's surge was mainly affected by the boost of its one-time destruction of uncirculated tokens. In addition, FTT, which currently ranks 32 in terms of market capitalization, is at the door of TOP 30, and it is important to know that in November last year, FTT's market value was only ranked 68th.

The total market value fell by 30% in March According to statistics, the market value of BTC fell by 9.78% in the first quarter, the sixth decline, that is, except for EOS, TRX, NEO, ATOM and MKR, the market value of BTC fell the most, which is different from the previous observations last year. This may indicate that as the current bridge between the digital currency market and the mainstream financial market, BTC is more susceptible to the joint influence of global external factors, while other digital currencies are mainly affected by BTC, that is, indirectly affected by global external factors. 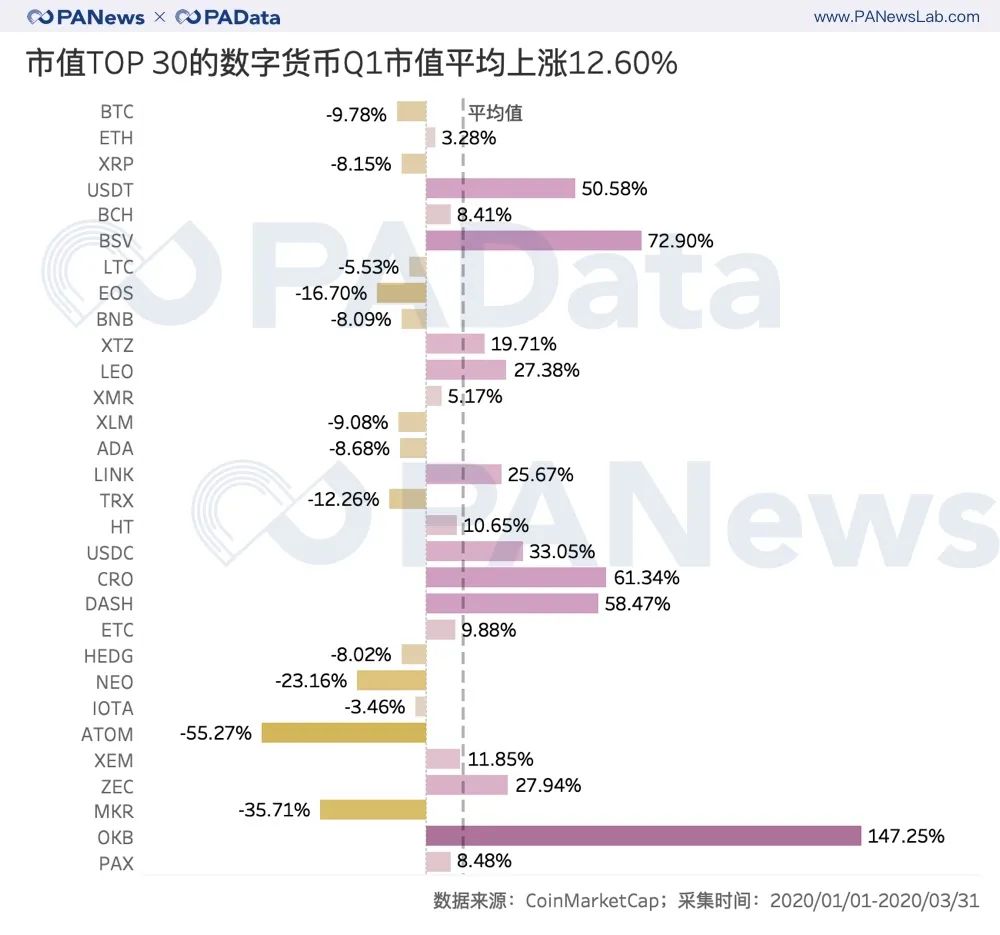 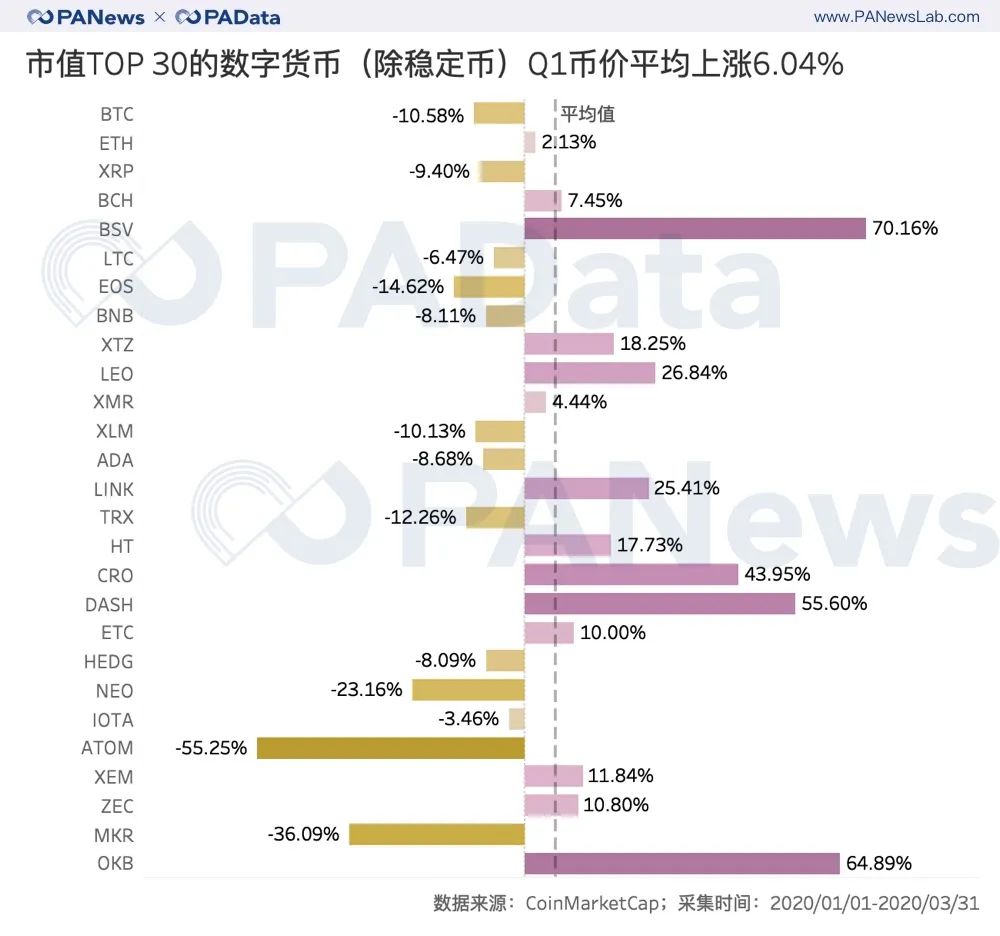 It can be seen that among the six higher-increasing digital currencies, BSV and DASH have the concept of halving, and OKB and LEO are platform coins. This also confirms the two theme concepts of the Q1 digital currency market, "halving" And "platform currency". Since entering the shock market in the second half of last year, the concept plates that have been rotated successively include platform coins and domestic public chains, and then trace back. Under the unilateral market of general inflation, the distinction between the concept plates is not obvious.

Affected by the complex external environment, the Q1 digital currency market also experienced shocks. According to statistics, in the first quarter of this year, the average daily volatility of the TOP 30 market value of digital currency is about 8.66%, which is higher than the average level since June last year and is equivalent to the average volatility of May last year. Climbing period. This may show a correlation that the volatility of the head asset's currency price is also greater when the market's upward kinetic energy is greater, and when the market enters a relatively stable period or sideways adjustment period, the head asset's currency Price volatility will decrease. 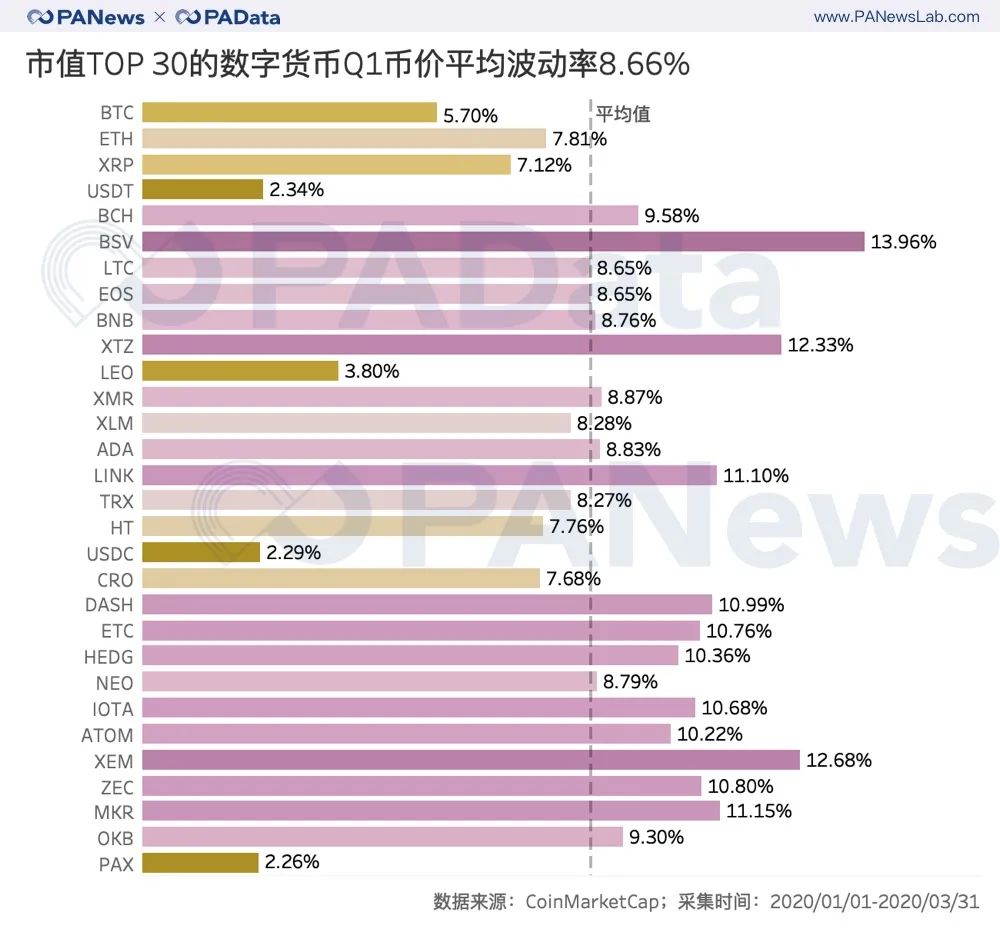 The volatility of the remaining 25 digital currencies is over 7%, of which BSV has the highest volatility, reaching 13.96%. In addition, XEM, XTZ, MKR, LINK, DASH, ZEC, ETC, IOTA, HEDG, ATOM also have average daily volatility exceeding 10%. This means that the price of the above 11 digital currencies fluctuates up and down every day at about 10 points. Investment in digital currencies is full of risks. You must know that the 10% increase or decrease has triggered a rise / fall limit in A shares, and this intensity of shock is common in the digital currency market.

If you hold the currency after buying it at the opening price of the start date of January 1 of Q1, you can calculate a currency holding interval according to the highest and lowest prices reached by Q1. The average size of this interval is 148%. The larger the income range, the greater the extreme fluctuations in currency prices and the higher the investment risk.

In addition to the stable currency, the smallest income range is LEO, and even if it is sold at the lowest point of Q1, its loss is only 0.52%, which is relatively stable, but on the other hand, the "ceiling" of LEO profit is relatively low, the highest Only 28.63%. The highest "ceiling" of Q1 currency holdings is BSV. If you sell at the highest point, you can make a profit of 354.47%. The DASH, ETC and XTZ income "ceiling" also exceeds 190%, which is close to double. The Libra Association will hold its first board meeting with up to 1,500 participating entities